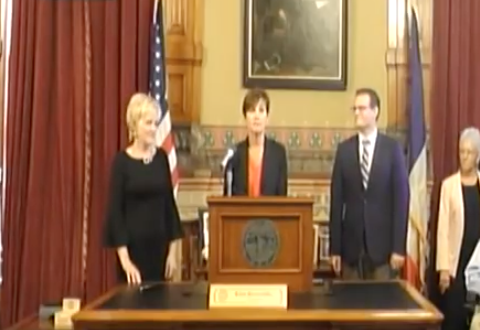 Governor Kim Reynolds will hold less frequent press conferences for the duration of this year's campaign, her staff acknowledged this week after persistent questioning by political reporter Barbara Rodriguez. The governor's spokesperson downplayed the significance of abandoning the weekly presser, an Iowa tradition Governor Bob Ray established and Terry Branstad and Tom Vilsack maintained. All public events on Reynolds' schedule would provide opportunities for journalists to ask questions, Rodriguez was told on July 31.

That promise didn't hold up well. The very next day, Reynolds read carefully from written remarks when announcing District Court Judge Susan Christensen as her choice for the Iowa Supreme Court. Christensen briefly thanked her family, friends, and colleagues, and promised to support the constitution. End scene, with no question time for the assembled media. The governor's staff also ignored my written inquiry related to the Supreme Court appointment.

It's not hard to guess why Reynolds would block journalists from asking her or Christensen about the process for selecting the first new justice to join Iowa's high court in seven and a half years.

The State Judicial Nominating Commission forwarded three nominees to Reynolds on July 10. After reading the finalists' written applications and watching their interviews with the commission (highlights here), I was ready to bet the farm Reynolds would choose Christensen. The judge's biography could not be a better fit: growing up in a small town and raising her children there, pursuing her law degree a bit later in life, and balancing her career with responsibilities as a wife and mother.

Reynolds and her staff have said she interviewed all three finalists on July 27. But in an unscripted moment following her last press conference on July 18, the governor let slip she had already spoken with one candidate. That exchange wasn't captured on the official video; Des Moines Register reporter William Petroski posted this clip on the Register's website.

Hours later, staff walked back the comment suggesting someone had received favored treatment. From O.Kay Henderson's story for Radio Iowa:

(This post was updated at 2:53 p.m. after the governor’s office reported the governor misspoke this morning when she indicated she’s talked with one candidate and had two interviews left. One of the candidates was interviewed for a previous court opening by then-Governor Terry Branstad and Reynolds, who was lieutenant governor at the time.)

Bleeding Heartland isn't bound by conventional journalism standards, so let's dust off our critical thinking skills. Watch the video at the top of Petroski's July 18 story, or read my transcript of the relevant section:

The process, it goes through the Judicial Nominating Committee. There were several that, you know, applied, and they did the interviews and sent me three names. And so, I do a personal interview with each individual and have an opportunity to get to know them, and I want somebody that will follow and uphold the law. That's what I'm looking for. And we've had the opportunity to interview with one, and I've got two more left to do.

The spin doctors' clean-up is not credible. Reynolds clearly wasn't recalling some time she and her predecessor met with an applicant for a judgeship years ago. (Branstad appointed Christensen to a District Court position in 2015.) She was referring to a conversation with someone after receiving the list of finalists the previous week.

Reynolds' staff did not respond to any of the questions I submitted by e-mail on August 2, including:

• How many times did the governor meet with Christensen or speak to her on the phone between May 1, 2018 and July 27, 2018? Justice Bruce Zager announced his planned retirement in early May.

• How many times had the governor spoken with Christensen before May 1, 2018?

• Did any staff from the governor's office reach out to Christensen in May or June to discuss the Supreme Court vacancy or encourage her to apply for the position?

• Did Brenna Findley Bird or anyone else informally connected to Reynolds contact Christensen in May or June to discuss the Iowa Supreme Court vacancy or encourage her to apply? Bird was Branstad's legal counsel during Reynolds' first four years as lieutenant governor. She has been serving as Fremont County attorney in the judicial district where Christensen is on the bench.

• Did Reynolds bring up specific Iowa Supreme Court rulings with the finalists? If so, which decisions?

• Did Christensen give Reynolds assurances that she disagreed with the Iowa Supreme Court's recent majority decision in Planned Parenthood v. Reynolds? In that case, five justices struck down a 72-hour waiting period as unconstitutional. Zager was part of that majority. If Christensen is aligned with the two dissenters, the high court will soon have three votes against the idea that our state constitution protects women's reproductive rights. One more appointment by Reynolds could make this landmark ruling a short-lived precedent.

The reporters attending the August 1 photo-op would likely have posed similar questions if Reynolds had followed through on staff promises. They also could have gotten Christensen on the record about whether she spoke to Reynolds before her formal interview and whether she told the governor specifically how she would approach abortion-related cases. (Unfortunately, Judicial Nominating Commission members didn't push the finalists on matters of constitutional interpretation.)

This appointment will have far-reaching implications; Christensen could serve on the Supreme Court for sixteen years before hitting Iowa's mandatory retirement age of 72. Here's hoping the media will return to this topic whenever the governor makes time to answer their questions. Reynolds has no press conferences scheduled next week.

P.S.--In the interest of transparency, reporters covering Reynolds should film the gaggles that will increasingly take the place of formal press conferences and make the videos publicly available, either as part of a news story, like Petroski did, or on their social media feeds.