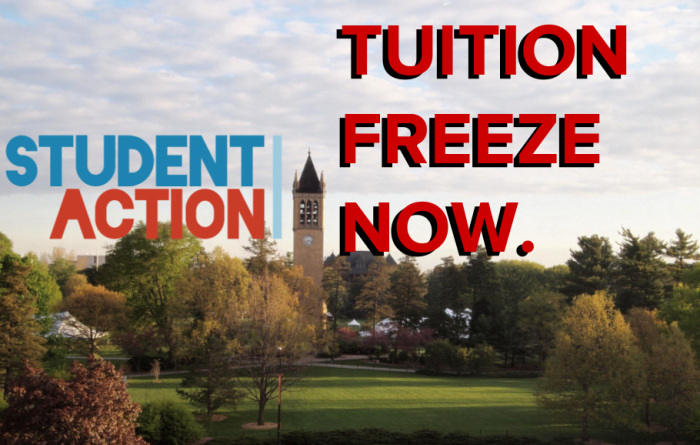 Iowa students lead in nationwide fight for free college for all

Students across Iowa will gather at Iowa State University in Ames on Monday, October 15 to call attention to soaring tuition hikes and wasteful development spending, such as the $8​4 million dollar project that will soon become the new Student Innovation Center.

This action comes as part of a National Day of Action hosted by ​Student Action and Young Democratic Socialists of America at over 20 campuses across the country as part of a broader campaign for Free College for All.

In Iowa, more than 75 students will gather to participate in a rally and protest on Iowa State’s campus to disrupt business as usual. They are demanding a tuition freeze at Iowa’s public universities and the resignation of three Board of Regents officials with ties to student loan interests. These demands support the message that education, including higher education, should be free and accessible to all, including undocumented and formerly incarcerated students. Students from Iowa State, Grinnell College, and Des Moines Area Community College will take part in this action, and continue to escalate throughout the school year until their demands are met.

This demonstration comes at a desperate time for Iowa students. Fueled by a combination of state budget cuts and efforts to increase new revenue, tuition has skyrocketed at Iowa Regent Universities. On average, tuition has risen over 70 percent in the last fifteen years. Regent universities schools are rapidly pricing out poor students and becoming dramatically less economically diverse. Students are struggling to manage increasing fees and basic living expenses at the same time. “My father was an immigrant,” said Javier Miranda, an organizer with Iowa State Student Action. “I’ve worked two jobs while going to school, and it’s not enough.”

The situation threatens to grow worse, as the Iowa Board of Regents weighs a new multi-year tuition model that would raise tuition by 7 percent each year at University of Iowa and Iowa State over the next five years. Iowa students have little faith in the board protecting their interests. Two members, Milt Dakovich and Nancy Dunkel, and executive director Mark Braun have ties to the predatory loan agency Iowa Student Loan Liquidity Corporation. That fact, coupled with repeated decisions to prioritize new revenue and private development over student financial need, have created a relationship of distrust between Iowa students and board members.

Though not a part of the Regent system, students at Des Moines Area Community College and Grinnell College express similar concerns. Regular tuition increases and corporate influence leave many students across the state facing exclusion and financial stress.

In addition, Iowa Student Action organizers have promised further escalation at scheduled Board of Regents meetings in November and February as well as strong preparation for the 2020 election. Students are prepared to continue the fight for tuition freezes at regent universities, the resignation of key board members, and university budgets that prioritize student financial aid. “On Monday, we are coming together for a day of action”, says Iowa State student and organizer Katie Sinn, “but this campaign is much more than a day, it is a multi-year fight to manifest education as a human right. Monday is just the beginning.”

——
Student Action​, ​a project of People’s Action​,​ ​is organizing to transform the system of higher education from one that commodifies knowledge to one that guarantees it as a right. From textbook costs to tuition hikes, each of our bases have local offense and defense campaigns that will lead us one step closer to fully funded college.