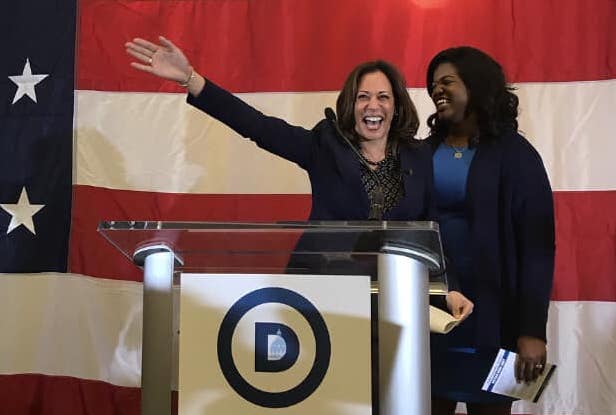 "Fight for the best of who we are": Kamala Harris rallies Iowa Democrats

Hundreds of Iowa Democrats got their first chance to hear U.S. Senator Kamala Harris on October 22. On her first major swing through the state, the senator from California had a packed schedule, including:

Though Harris is widely viewed as a potential 2020 presidential candidate, she kept her focus on the election happening November 6. I enclose below the full audio and partial transcript of the evening speech, which was similar to remarks Harris delivered earlier in the day.

Whereas some politicians tend to use convoluted, run-on sentences, Harris was striking in how she used simple sentence construction and repetition to great effect.

After thanking the crowd for coming out, DeJear reminded them that only fifteen days remain “until the last day to cast our ballots. And it’s going to take each and every one of us to make this thing happen.” She explained that in midterm elections, the Democratic Party tends to focus on “reliable voters” who participate in every election, as well as those who vote in presidential years but not always in a midterm.

Needless to say, that’s going to leave some people out. And we know that there are folks that are raising a lot of money to oppose the things that we stand for. And that’s ok. Because there is no amount of money that can counter the people power in this room.

DeJear promised “to put y’all to work,” challenging everyone to create their own personal GOTV list,

It’s up to us to allow them the opportunity to stand on our shoulders so that they really understand the true essence and the value of the vote.

It’s time for us to elect people that represent our values, not just in this community but throughout the state.

DeJear then introduced Harris as “a force to be reckoned with.” She had never met someone who “defends justice so tenaciously with grace.”

Alexandra Rucinski took this picture from the front row as Harris spoke: 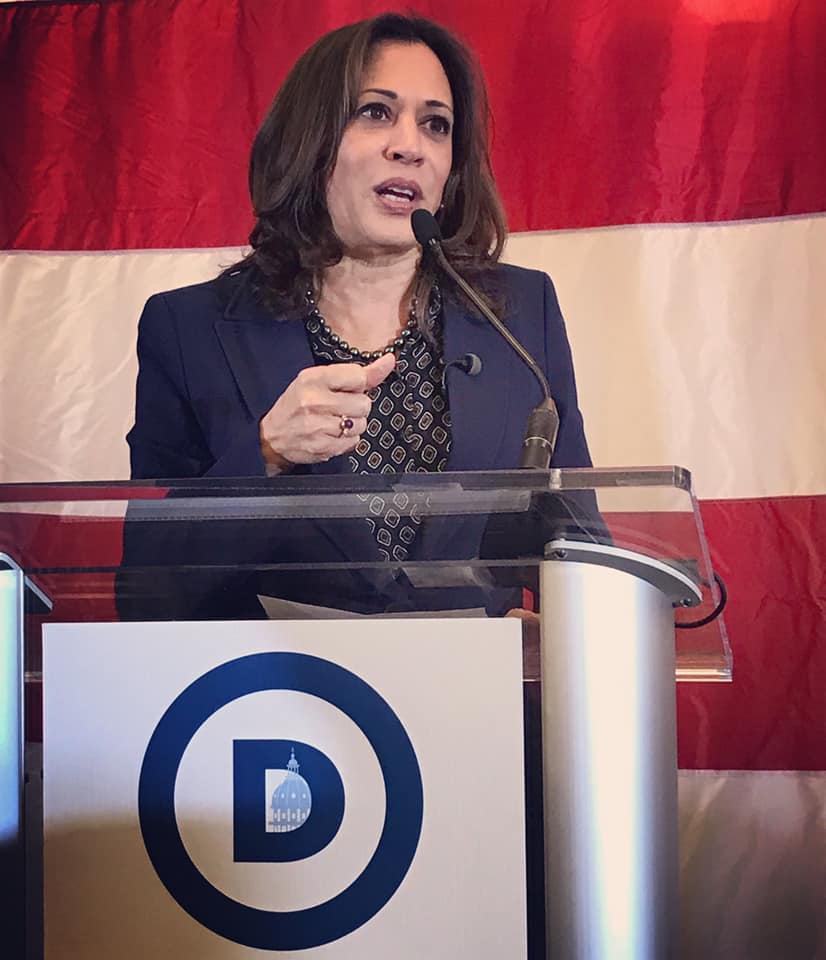 Harris began by observing, “We’ve got work to do.” She praised DeJear as “a rock star” and recalled spending time with her on a visit to California “many months ago.”

She’s got a vision, not only for Iowa. She’s got a vision for the country. Because you know, this is the reality of it. What happens here in Iowa, what you Polk County Democrats do, will not only affect this county and this beautiful state, it will affect our nation. What you are doing here will be a statement about who we are as Americans. And there is so much on the line, and electing Deidre DeJear will be a statement about who we are.

This is a time that is requiring each of us individually and all of us collectively to look in the mirror and ask this question: who are we? And I believe, Polk County Democrats, I believe part of the answer to that question is: we are better than this.

“We are in a moment in time where we have the power,” Harris said. “The people have the power to make the decisions.” On a pivotal issue like health care, “where the stakes are so high,” we say that if you’re not going to support health care for everybody, “we’re going to vote you out of office.” We won’t put up with people using their power to “bully people and demean people, and this display of raw power. We’re not having that. We’re not having that. So what are we going to do? We’re going to take the power back.”

As activists approach the next fifteen days, Harris urged them to understand the “great level of distrust” among Americans now, including our friends and family and neighbors and co-workers.

When politicians appear in public, there’s sometimes an incentive to speak in a way that makes everyone feel “lovely” and walk away feeling “marvelous.”

And y’all are looking at me, ok, Kamala, what you got in mind? OK, let’s speak some truths, uncomfortable though they may be.

If Charlottesville didn’t make it clear, racism, homophobia, anti-Semitism, sexism are real in this country. Let’s speak those truths so we can deal with it.

Let’s speak truth that in this country right now, this economy is not working for working people.

When you listen to folks who say oh, the economy is great, they say. The economy is great. And then you ask, well what exactly, how exactly are you measuring that? What’s the metric, right? Oh, well look at the stock market. Well, that’s fine if you have stocks!

They’ll say oh, well, you know, the economy is doing great. I say, well how would that be? Well, look at the unemployment numbers. Well yeah, ok, people are working. They’re working two and three jobs to pay their bills! […]

Let’s look at what’s happening in this country right now. For many, many Americans, they are $500 away, a $500 emergency away from economic catastrophe. Talk about health care: the leading cause of bankruptcy for many Americans is a hospital bill they cannot afford to pay.

This economy ain’t working. Not for working people.

Last week, Harris introduced her own tax plan, called the LIFT the Middle Class Act. The concept somewhat resembles a basic income plan, using tax credits of up to $500 per month. (A universal basic income of $1,000 for every American adult every month, regardless of income level, is the centerpiece of Andrew Yang’s presidential campaign.)

“If a household has an income of less than $100,000,” Harris explained to the Polk County Democrats, “you get a $6,000 tax credit, and if you elect, you can collect it at $500 a month.” Wages have remained flat while the cost of living keeps rising. Her plan would help working families pay for major expenses like gas, housing, college tuition.

Harris brought her voice down:

I’ll say this: I think one of the most important truths we can speak–especially at this moment in time, where there are such powerful voices that are trying to sow hate and division among us–one of the most important truths we can speak, is the vast majority of us as Americans have so much more in common than what divides us. Let’s speak that truth.

They’re trying to divide us. They’re trying to have us point fingers at one another. It’s us versus them. Let’s reject that. Let us own the fact, the vast majority of us have so much more in common than what separates us. And I know that to be true. I know it to be true based on every personal, every professional experience I’ve had.

Harris mentioned an experience many people can relate to, when you wake up in the middle of the night “in a cold sweat.” For most of us, that middle-of-the-night worry “is never through the lens of the party through which we are registered to vote.” It’s not “through the lens of some demographic a pollster put us in.” For most people, those thoughts relate to just a few things: our personal health, the health of our children or parents, anxiety over getting a job, keeping a job, being able to pay the bills or retire in dignity or pay off student loans.

The senator tied that back to the task at hand:

The vast majority of us have so much more in common than what separates us. And as we move through these next fifteen days, let us own that. Let us hold on to that. Let us understand: we are all in this together.

“We understand what’s not working.” We’re going to talk about problems. Sometimes when we critical of what’s not working, others question our love of country. “Well I reject that notion.” Harris contrasted two definitions of being a patriot. One means “you condone the conduct of your country whatever it does, and then there is the kind of patriot I believe us all to be. The kind that will fight each and every day for the ideals of our country.” As the crowd cheered, Harris insisted, “This is a fight that is born out of love of country. And nobody can take that from us.”

This pivotal moment will pass, Harris noted. Someday our children and grandchildren will ask us, “Where were you” during that inflection point for the country? Our answer will be more than saying how we felt at the time.

Our answer is going to be what we did. What action we took. That we stood out. We stood up. We marched, we shouted, we registered people to vote. We got people to the polls early. We text messaged. We e-mailed. We called people. We bugged the heck out of them. We annoyed them, but we knew they’d come back to us eventually. But we got them to know that their voices matter, that they matter, that we are all in this together.

And so let’s get out there for these next fifteen days and put everything into this. Let’s not wake up in sixteen days and have any regrets. There is too much on the line. We are better than this, and we are all in this together.

An aside on early voting: Harris mentioned unfortunate aspects of U.S. history. For many years, African Americans and women were denied the right to vote. “Many of us, honoring that fight and understanding how precious it is to have this right to vote, we have ceremonies about voting.” Bringing our kids to vote on election day, taking selfies and so on. “We can honor the ancestors by voting early.”