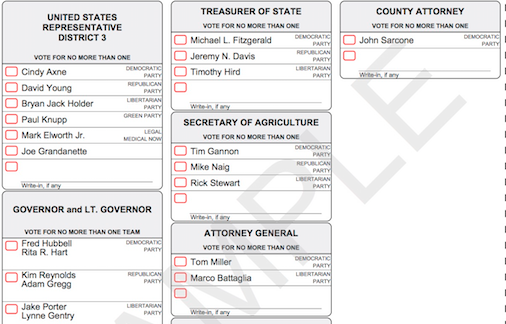 Quick takes from Ira Lacher on the Iowa and national election results. -promoted by desmoinesdem

Some takeaways from Tuesday's midterms:

OK, there will be those who insist that the people of northwest Iowa remain curiously unable to grasp tolerance and even Jesus H. Christ couldn't beat Steve King, who was called out as never before for his racist, white supremacist rants. But there may be something else involved: The people calling him out were largely from out of state. And Iowans don't like to be told by people from out of state what to think. Unless the critical mass of KKKing critics comes from inside Iowa, he will continue to hold sway.

Friends I spoke with before the election told me they just didn't like Hubbell. A common reference was that he had a "deer in the headlights" demeanor, especially in his commercials. On the other hand, they said, Reynolds came off like a nice neighbor who'd just as soon bake you a pie. It was Tip O'Neill, the legendary House speaker, who once said, "It's always the candidate." When you're not likable, your policy positions may not be enough to pull you through.

I said throughout the campaign that Hubbell's greatest ongoing mistake was playing defense when confronted with Reynolds' attack ads about his wealth. O'Neill or Machiavelli or Sun Tzu or somebody constantly urged that when you're under attack, counterattack. Reynolds was extremely vulnerable for her policies of profiteering Medicaid, emasculation of workers' rights and other actions that directly impacted Iowans. But Hubbell didn't lash out at those till the very end, when too many people had already made up their minds that he was a millionaire who was going to raise our taxes.

Hubbell Lost Where It Counted Most

Fred Hubbell won only eleven of Iowa's 99 counties and lost big everywhere else. According to county-by-county results, he scored over 60 percent in only one county: Johnson, where he garnered 72 percent in the most liberal county in the state. Elsewhere, Reynolds routinely piled up 60-percent wins.

What does this say? That the Des Moines/everywhere-else-in-Iowa divide is alive and well. Reynolds scored big, taking aim at Hubbell as a Des Moines rich guy vs. her down-home-Iowa background; it was the same strategy that won a Senate seat for Joni Ernst in 2014. So, attention, Democrats: Look outside the capital for your candidate in 2020, when Ernst is up for re-election, and 2022, when Reynolds is up again and either Chuck Grassley, who will be 89 that year, or his Republican replacement is on the ballot.

Stories about long lines in Georgia, where Brian Kemp narrowly beat Stacey Abrams in the governor's race, undoubtedly killed the turnout. As reported in Vox and elsewhere, nearly 75,000 voters -- mostly black people -- were purged from the voter rolls, and weird accusations were made about Democratic hacking with the voting system. Legal action is being contemplated. But look for this in other swing states in 2020. Shudder.