Fifth in a series interpreting the results of Iowa’s 2018 state and federal elections.

Republicans ended straight-ticket voting in Iowa last year as part of a law imposing several new barriers for voters. For months, I've been trying to work out how eliminating that option would affect this year's outcome.

More than 400,000 Iowans filled in the Democratic or Republican oval on their 2014 general election ballot, which worked out to roughly 37 percent of those who participated. I expected a much larger "undervote" for lower-profile statewide offices or legislative races this year, as many who would have voted straight ticket marked their ballots for governor and Congress alone.

Under the old system, any ballot marked for a Republican or Democratic ticket would assign that person's vote to every candidate from the chosen party. Of the 1,135,138 Iowans who voted in the 2014 midterm election, 212,085 cast straight-ticket ballots for the GOP and 194,299 did the same for the Democratic Party.

Including those who voted a straight ticket, about 1,130,000 Iowans chose one of the U.S. Senate candidates in 2014, and roughly the same number voted for a candidate for governor.

Unofficial results show 1,321,694 Iowans cast ballots in this year's general election. The final number will change somewhat after provisional and late-arriving absentee ballots are counted. Data currently available on the Secretary of State's website do not list undervotes for each race; the official canvass will do so later. In the meantime, we can approximate how many ballots were not marked for anyone in a given race by subtracting the total votes for all candidates and write-ins from 1,321,694.

Nearly all the Iowans who voted this year (1,315,192) chose a candidate for governor, so I'm focusing on the down-ballot races. Contenders for those offices were generally less well known than Kim Reynolds and Fred Hubbell, and their campaigns received significantly less media coverage. They also spent far less on television or radio advertising than did the candidates for governor.

The attorney general's race is a special case. Since Republicans did not field a candidate this year, Libertarian Marco Battaglia was the only alternative to Democrat Tom Miller.

Leaving that election aside, we see that about 97 percent of Iowans who voted this year took the time to fill out the whole front page of their ballot. The 2014 data suggest that more than a third of them might have marked a straight ticket if that option had remained available. The vast majority of those voters chose to express a preference for the other offices.

Remarkably, not only was the percentage of undervotes lower this year, the raw number of Iowans who left lines blank for the down-ballot statewide offices was lower than in 2014, even though this year's turnout was substantially higher (about 190,000 more participants).

Why did this happen? My best guess: political parties and candidates invested more in reminding supporters to fill out the whole ballot this year, because of the change in state law. For instance, some Hubbell campaign literature distributed this fall included pictures and names of other statewide Democratic candidates on the back page. 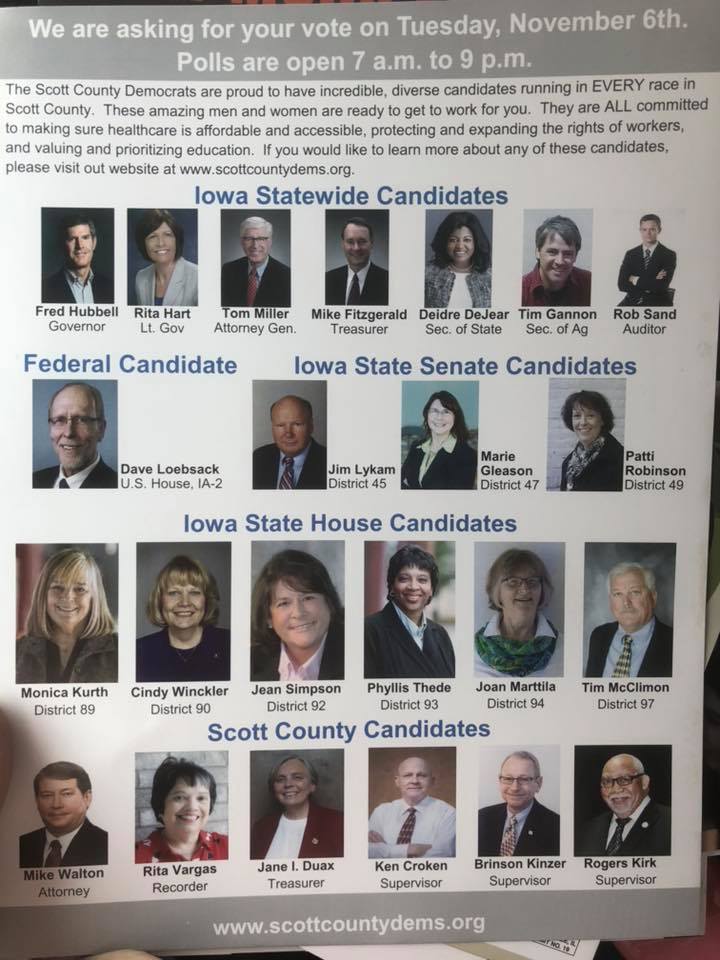 Bottom line: undervotes decreased compared to the last midterm election with a straight-ticket option. In contrast to the 2014 Iowa secretary of state race, no statewide office had a larger number of ballots left blank than the difference between votes for the winning and losing candidates.

NO APPARENT INCREASE IN UNDERVOTES FOR STATE LEGISLATIVE RACES

I wondered whether eliminating straight-ticket voting might hurt one party more than the other in key state legislative races. Four years ago, a few Iowa House or Senate candidates won by margins smaller than the undervotes in their race.

Reviewing the returns from many legislative races, I found no evidence that large numbers of voters skipped that portion of the ballot. Since undervotes aren't currently listed on the Secretary of State's results page, I examined a number of counties wholly located in one Iowa House or Senate district. A few examples:

Madison County is part of Senate district 13, which was uncompetitive in 2014 but inspired big spending by both parties this year. According to unofficial results, 7,655 Madison County residents cast ballots in this general election. Nearly all of them (7,628) picked a candidate for governor. Just 69 (0.9 percent) failed to pick a candidate for Congress. Total votes cast in the state Senate race: 7,496, which means only 2.1 percent skipped that part of the ballot. Even more striking: although neither Democrats nor Republicans targeted House district 25, the total Madison County vote for candidates in that race was 7,445 (2.7 percent undervote).

Davis and Van Buren counties are part of Senate district 41, where Republican Mark Chelgren won four years ago by 374 votes, with 536 ballots marked for no candidate (2.6 percent undervote). Both parties spent heavily on this yeaar's race, an open seat due to Chelgren's retirement. Of the 3,164 Davis County residents who voted, 3,139 chose a candidate for governor, 3,084 marked the ballot for one of the state Senate candidates (2.5 percent undervote), and 3,070 picked a candidate for House district 82 (3.0 percent undervote). Neither Democratic nor GOP leaders anticipated a close result in the House election.

The non-voters in the House race could theoretically have swung the outcome, as Democratic incumbent Phil Miller trailed GOP challenger Jeff Shipley by just 39 votes on Tuesday night. Still, the undervote was smaller than I would have expected given the lack of attention to that campaign.

I also looked at results from some counties that lie within uncompetitive legislative districts. (By uncompetitive, I mean neither party invested much money in direct mail or paid advertising, unlike battleground House or Senate districts.) Mills County was typical: 6,310 voters participated, of whom 6,269 voted for governor. There was no state Senate race, because even-numbered districts were not on the ballot this year. Total votes for a candidate in House district 23, which Republican incumbent David Sieck carried by two to one: 6,182 (2.0 percent undervote).

Ida County is part of Senate district 9, where State Senator Jason Schultz did not draw a challenger. Among the 2,952 Ida residents who voted in this election, 2,798 marked the ballot for a candidate in House district 17. That's only a 5.2 percent undervote for a race GOP incumbent Matt Windschitl won by a three to one margin.

I still favor providing a straight-ticket option. Hundreds of thousands of citizens preferred voting that way, and for people who have certain disabilities or medical conditions (such as arthritis or tremors), filling out ten ovals instead of one is burdensome. Nevertheless, I'm pleased to learn this change in the law didn't produce hundreds of thousands of ballots without a choice marked for important Iowa offices.

Appendix 1: Front page of 2014 sample ballot for Monona County, Iowa. Note the straight-party option was listed before any federal or state offices. 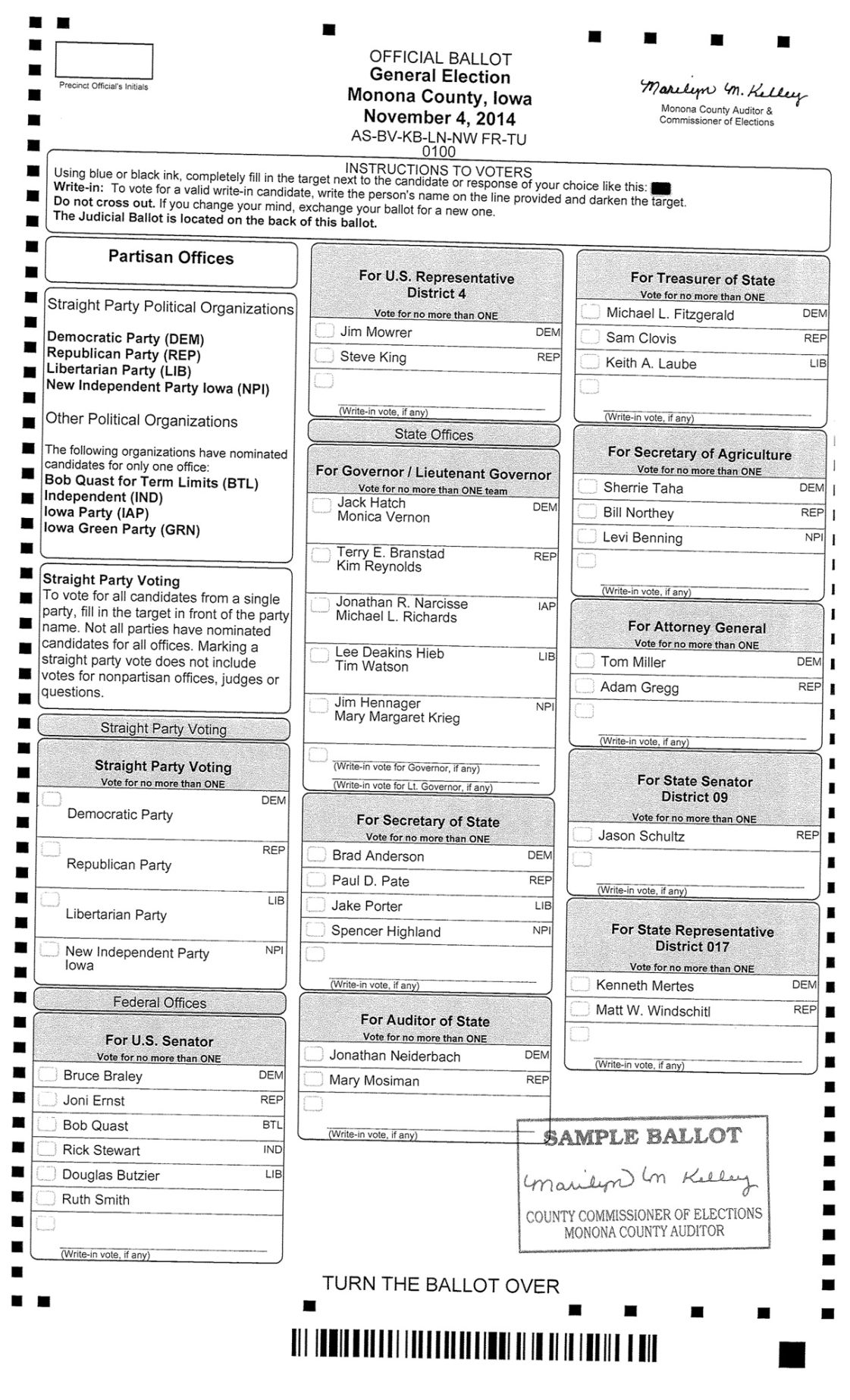 Appendix 2: Front page of 2018 sample ballot for Windsor Heights precinct 2 in Polk County, Iowa. Unlike in past years, there is no option to fill in one oval in order to support all candidates from a given political party. 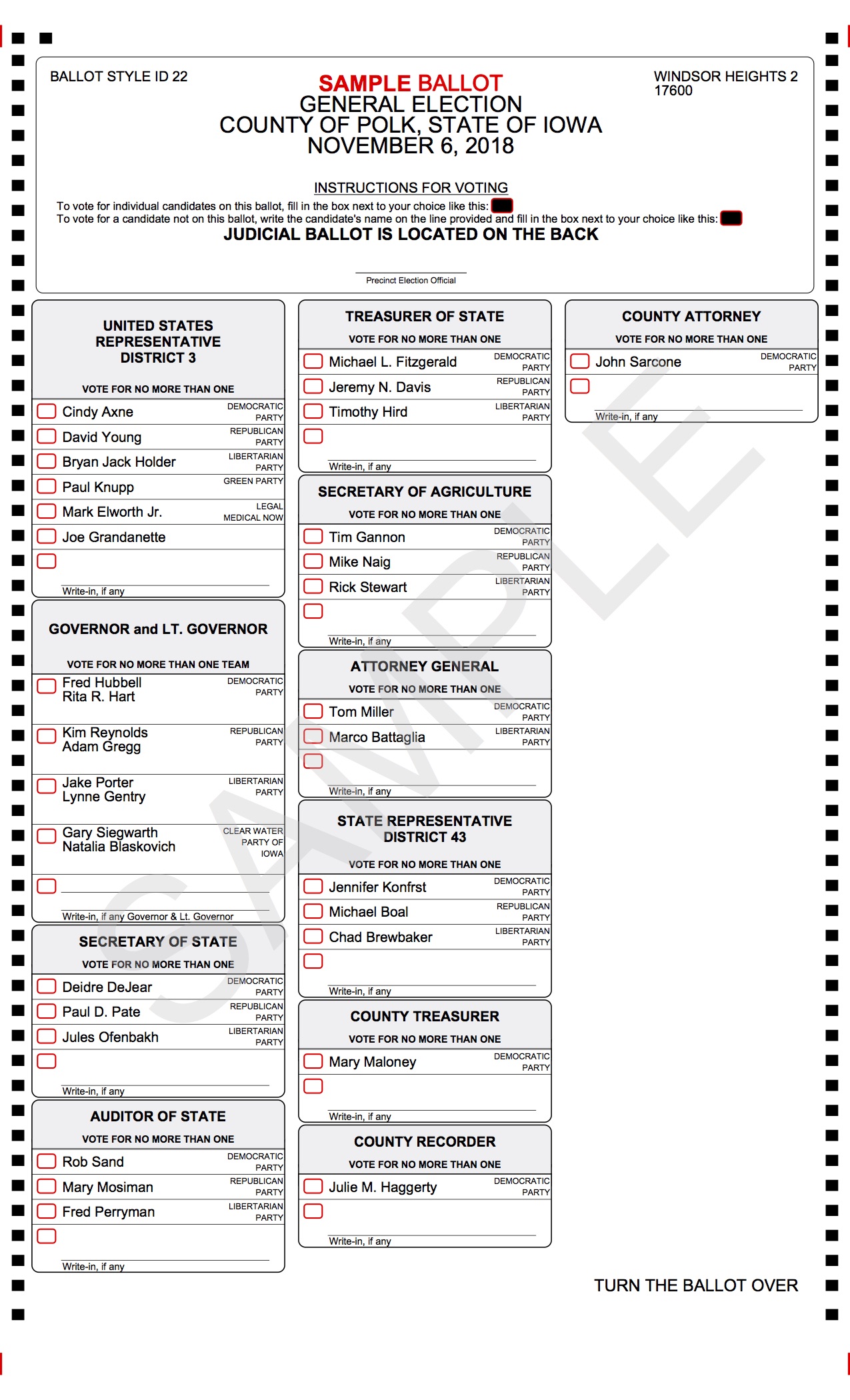