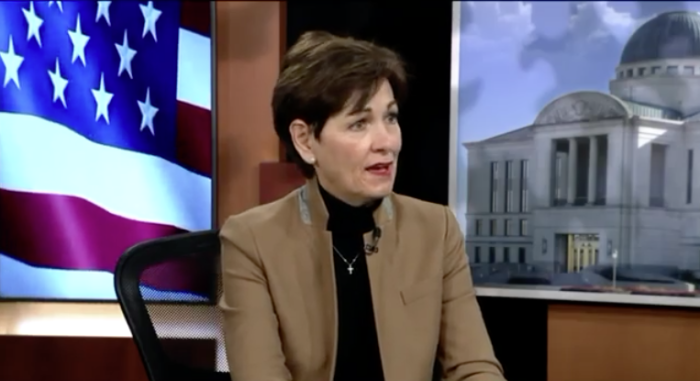 "It's not helpful, I don't agree," Governor Kim Reynolds says she has told Representative Steve King after some of his racist statements made national news.

Her two-faced approach to Iowa's most famous bigot isn't fooling anyone.

King's hateful views about people who are not white Christians of European descent have been chronicled many times. Most recently, he referred to immigrants from Mexico as "dirt" in banter with supporters before a campaign event in Webster City. Though King characterized the Weekly Standard's account as "false and manufactured accusations," reporter Adam Rubinstein published the recording that proved King's as big a liar as he is a racist.

The Weekly Standard isn't the only voice on the right to denounce "Iowa's worst congressman." Jonathan Tobin recently wrote in The National Review that King's "dalliances with racists and anti-Semites are too high a price to pay" for holding Iowa's fourth Congressional district. Conservative columnist Jennifer Rubin of the Washington Post argued that House Republicans should throw King out of the caucus or even "expel him from the House [...] for conduct unbecoming a congressman." That will never happen, but the leader of the National Republican Congressional Committee condemned King's white nationalist comments and refused to spend money defending his seat.

Meanwhile, Reynolds shared the stage with King at her final pre-election rally in Iowa's reddest county. In a district Donald Trump carried by 27 points, where King received more than 60 percent of the vote in the last two elections, the Republican defeated challenger J.D. Scholten by just 50.3 percent to 47.0 percent.

Days later, Reynolds basked in her own 3-point victory during an interview with Dave Price on WHO-TV's "The Insiders." My transcript of the exchange about King, starting around the 7:40 mark of the first segment:

Price: There have had to be moments, I would assume, these last couple of weeks, when you're reading some of these comments Steve King has made, right?

Price: Do you--and you've seen how he has reacted to this. So in his victory speech on Tuesday night, he talked about that really, this was just kind of a smear campaign against him, and the media and the Democrats were all kind of behind this. Do you have, have you had conversations with him to show your displeasure? You have criticized him when it comes to things like when he says diversity's bad.

Price: You have pushed back on things like that.

Price: Do you give him advice? I mean, I realize he's been at this longer than you have.

Price: But how do you see that? How is that relationship?

Reynolds: Well, first of all, thank you for recognizing that I do speak up when I don't agree with him. And I've made that very clear. I mean, just--you know, we're both serving. He's been elected by people in the fourth district and they've re-elected him again.

And I don't think, and I don't have a chance to talk to him that often, with even all of the Congressional delegation, we just, we just don't have an opportunity to do that that often. But you know, I hope he really refocuses and take[s] a look at really doing a better job of staying in the district and representing the district and have that be front and center going forward.

But you know, I have had the opp--I have a couple of times, just said, you know, this is not--it's not helpful, I don't agree, and I'm, I'm going to indicate that when that's the case.

Enough with the phony virtue signaling. Reynolds seems to think she deserves extra credit for occasionally disagreeing with one of the most toxic voices in public life.

The reality: Reynolds has aligned herself with King whenever she has seen political advantage in doing so.

Speaking to WHO's Price after the election, Reynolds admitted King needs to focus on serving his constituents (as opposed to globe-trotting to hang with neo-Nazis).

Yet when King faced a credible GOP primary challenger in 2016, Reynolds enthusiastically endorsed him: "Steve is a good friend and a great Congressman. Most importantly, he’s a hardworking, accessible Representative the Fourth District can trust." She told the most widely-read newspaper in northwest Iowa, "He has been an effective advocate for his district and for Iowans."

When Reynolds expected to face a well-funded rival for the Republican nomination for governor, she highlighted King's involvement with her campaign.

Governor Reynolds was humbled by the endorsement saying, “Congressman Steve King is a strong defender of freedom and our conservative values. He’s independent, principled, and is fighting the good fight in Washington, D.C. You never have to question where he stands. I look forward to him joining us in our effort to build a better Iowa.”

I’ve made it very clear I disagree with the comments that he’s made. You know, we are a country of immigrants, and we celebrate that. I disagree with what he’s said, I’ve said that before. He's one of thousands of chairs and co-chairs on my campaign, a lot of elected officials that have endorsed me. [...]

A few days later, her political career on the line, Reynolds closed out her campaign at a rally with King. "I do speak up when I don't agree with him" never happens in front of a Republican audience.

I don't know what's in the governor's heart. At best she is a coward, sincerely revolted by King but afraid to risk alienating Iowans who share his views.

Alternatively, perhaps Reynolds can't relate to how King's behavior makes Iowa less safe for those he demonizes. She has never been part of a disfavored minority group. She has no experience of being outnumbered by people of a different race or religion or sexual orientation. The "somebody else's babies" who, in King's view, are carrying out America's “slow-motion cultural suicide," don't look like her own adorable grandchildren.

Reynolds has the political sense to grasp she needs to be seen as caring and tolerant, so she mouths the right words in interviews and press conferences, sounding exasperated she has to answer this question yet again.

It would be more honest for her to admit racism never has been and never will be a deal-breaker for her.

If Reynolds cared about making Iowa a welcoming place for everyone, not just straight white Christians, she would repudiate King and recruit a more worthy Republican to represent the fourth district.

UPDATE: Sticking closely to her notes, the governor engaged in more kabuki theater at her first post-election press conference. William Petroski's story for the Des Moines Register adopted the best possible frame for Reynolds. The headline reads, "Iowa Gov. Kim Reynolds bluntly tells Steve King to decide future amid racism allegations," as if King's racism were some recently-revealed secret rather than an indelible part of his rhetoric for years. Petroski uncritically transmitted the spin in his lede:

Iowa Gov. Kim Reynolds signaled Tuesday she's lost her patience with U.S. Rep. Steve King, who won a ninth term in the U.S. House last week despite a firestorm of criticism for aligning himself with far-right European politicians and repeatedly making remarks many have deemed racist.

Reynolds, a Republican who narrowly defeated Democrat Fred Hubbell to win a full four-year term last week, offered a bluntly worded response when asked by a reporter if she had visited with King about a series of controversies he has been facing.

Reynolds said she hasn't talked with the Iowa congressman because she has been busy since the election. But she added: “I think that Steve King needs to make a decision if he wants to represent the people and the values of the 4th District or do something else, and I think he needs to take a look at that.”

King has shown many times which people and which values he represents. How convenient for the governor to "lose patience" now that she has been elected to a four-year term.

In a statement his spokesperson released to the Des Moines Register, King chose not to escalate: "Congressman King loves Gov. Reynolds, is thankful to her for signing his heartbeat bill into law, and notes that they are birds of a feather because they won by similar margins."