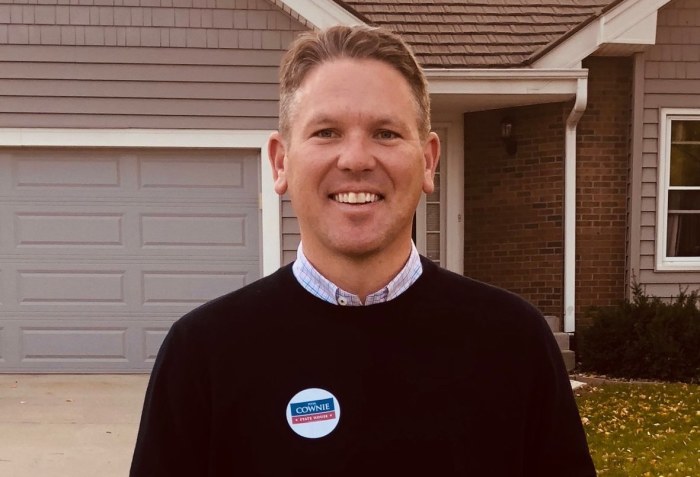 Even in defeat, Peter Cownie's better off than Iowans with bad shoulder injuries

Ninth in a series interpreting the results of Iowa's 2018 state and federal elections.

The loss must sting. Cownie would have led the House Ways and Means Committee next year, a powerful position as Republicans in full control of state government plan more tax cuts skewed toward corporations and wealthy people.

But in this season of giving thanks, Cownie can be grateful he will continue to be well-compensated. In contrast, Iowans with career-altering shoulder injuries are experiencing tremendous hardship under a 2017 law Cownie introduced and fast-tracked.

POLITICAL CHANGE IN THE SUBURBS

Cownie's political demise reflects broader trends in the suburbs of Des Moines, where Democrats picked up five Iowa House seats this year. Since 2009, Cownie has represented a part of West Des Moines that elected Republican lawmakers for decades. He ran well ahead of the the GOP presidential nominee in his district in 2012, and few Iowa politics watchers considered him vulnerable going into the 2016 election cycle.

After internal polling showed hard-working Democratic challenger Claire Celsi gaining on the incumbent, the Iowa GOP spent more than $350,000 on Cownie's behalf two years ago, mostly on television advertising. He ended up winning by about 1,100 votes. Hillary Clinton carried the precincts in House district 42 by 51.2 percent to 42.2 percent, even as she lost statewide a by more than 9 points.

Cownie's seat was a top target this year. Whereas Celsi received little assistance from her own party in 2016, Democrats spent just over $500,000 supporting Sunde. Republicans poured in nearly $700,000, paying for weeks of television commercials in heavy rotation as well as extensive direct mail and digital advertising. Both sides ran a mix of positive and negative tv ads.

Cownie's fate indicates that House Majority Leader Chris Hagenow was wise to flee to safer Republican territory rather than risking a rematch against Jennifer Konfrst in House district 43. Clinton carried that suburban district by more than 11 points two years ago. Democrats now have a larger voter registration advantage in the district Konfrst just picked up than in Cownie's seat next door.

As one chapter of Cownie's career ends, at least he won't be hurting for money. Many Iowans affected by one of his signature bills aren't so lucky.

Upon leaving the Iowa legislature, Cownie will lose a $25,000 annual salary, $12,450 in per diem payments ($124.50 per day for the first 100 calendar days of the session), and access to heavily subsidized health insurance.

So while Cownie will lose a fraction of his income next year, his earnings will still be roughly double the median household income for Polk County and substantially higher than the median income for the city of West Des Moines. Plus, his wife Mary Cownie will receive a high salary as chief of staff for the Mercy Health Network.

Now consider the impact of the workers' compensation overhaul Republicans enacted in 2017. Cownie introduced that legislation as House Commerce Committee chair and moved it forward within days of its publication, over strong objections from Democratic lawmakers.

The law was designed to either exclude Iowans from the workers' compensation system or dramatically reduce the benefits they could receive. A particularly cruel section reclassified shoulder injuries, the most common way workers get hurt in meatpacking plants. The concept was to slash payments for those injuries and shift the burden to a fund covered by insurance companies rather than by "self-insurers," which includes meat industry giants like Tyson Foods.

Statehouse Republicans amended the bill before final passage to provide slightly less stingy benefits for shoulder injuries. However, the version Governor Terry Branstad signed into law, with full support from then Lieutenant Governor Kim Reynolds, left workers far worse off in many respects.

Emily Schott, Matthew Glasson, and Colin Gordon documented the fallout in an excellent report for the Iowa Policy Project this September. The team reviewed 87 workers' compensation cases that came before administrative law judges in 2017. Claimants in 66 cases had shoulder injuries and "were awarded permanent disability benefits that could be compared under the old and new laws." The researchers calculated that on average, each worker would receive $72,000 less under the new law.

"We learned that most workers affected are male, older (over 50), with a high-school or less education," Glasson said. "One of the changes in the law is that administrative judges are no longer permitted to consider personal factors (age education, work experience, etc.), which could have an impact on a worker's ability to earn a living. The resulting impact is huge--the average claimant will see a massive reduction in compensation for a permanent workplace injury, from $98,000 to $26,000 over their lifetime."

Gordon looked at the individual impacts on workers, showing a wide range of benefit changes.

In one case, the beneficiary would have received $206,000 less under the changes. In seven other cases, the loss would have exceeded $150,000.

The researchers noted that the vast majority of workers' compensation cases are settled before reaching a judge, so these 66 cases represent just a small subset of the total number of workers who suffer similar injuries in Iowa each year who can expect much lower compensation under the new law.

"We do know that there are likely hundreds of serious shoulder injuries in Iowa every year. All of those people will be affected in a similar way, going forward," Glasson said.

Like Cownie, the vast majority of Iowa Republican lawmakers are able-bodied, college-educated men. Most probably would not last long doing hard, physical jobs where workers often suffer debilitating injuries. Those employees--many of whom received low pay to begin with--now face life-ruining financial consequences if they become severely hurt at work.

Cownie championed the workers' compensation bill in committee, on the Iowa House floor, and at public forums. The whole Iowa Policy Project report is worth reading for numerous examples of how the law will harm Iowans, especially those with "serious, permanent disabilities" due to a workplace injury. Some important excerpts regarding the shoulder language, which is just one part of that story:

According to our calculations, under the new system, the total compensation awarded in these [shoulder] cases would decline substantially (see Figure 1 below). The new range would be from $1,219 to $113,626. The average (mean) would be $26,418; the median would be $23,209. In other words, the total compensation received for a permanent disability arising out of an “average” shoulder injury would decline by $72,036 or 73.2 percent.

Those losing the most under the new system will be older workers, and those with higher levels of industrial disability, limited education, a history of manual labor, no special skills or training, and those with other disabilities.

Among the “top 10,” those with the largest percentage loss, one worked in retail, one in agriculture, two in construction and six in meatpacking or other food processing. A majority had less than a high school education, three were immigrants, and one had a learning disability. Under the old system, these factors led the deputies to award these individuals significant amounts of industrial disability. Under the new system these factors would not be considered. For example, the 49-year-old asbestos removal worker in our sample would see his total compensation reduced from $91,389 to $1,219. The 31-year old woman from Liberia, injured in a meatpacking plant, would see her compensation reduced from $121,989 to $4,504. The 52 year-old Mennonite truck driver would receive $25,378 instead of $211,484.

Remember, this analysis covers the final version of the law. Cownie was an eager foot soldier for the original draft, which would have been even more disastrous for injured workers.

During Iowa House debate on the workers' compensation bill in March 2017, Cownie touted an amendment that would provide some community college training for people "who can’t work because they were injured on the job. [...] We have a wonderful community college system in this state, that helps solve this problem, that I think everyone in this room wants to solve."

The Iowa Policy Project report exposed that provision as a farce (emphasis in original).

Community college to the rescue? [...] The only significant concession made in the final version of the bill was in response to concerns about the reclassification of shoulder injuries. As a result, HF518 [the 2017 workers' compensation bill] was amended to add a new type of benefit, available only to workers with a shoulder injury resulting in a permanent disability.

Workers with a permanent injury affecting their shoulders may be entitled to financial assistance to allow them to attend community college for the purpose of being retrained for a different occupation. There are many restrictions and conditions on this new kind of financial assistance. These benefits are available only to workers with shoulder injuries so severe that they “cannot return to gainful employment.” That standard is so high that, if applied literally, it would only provide benefits to workers who are totally disabled as the result of a shoulder injury. That would be a very small number of cases. None of the workers in our sample of 66 shoulder cases adjudicated in 2017 would have come close to this standard.

Workers who might qualify "would have to be evaluated by Iowa Workforce Development." If cleared, they would have six months to enroll in a specific program at the nearest community college. The maximum educational benefit would be $15,000. Meanwhile,

The worker will not receive any financial compensation for the time that he/she is attending college, not even the $100/week vocational rehabilitation benefit payable to workers with non-shoulder injuries (taken away by HF518).

There are so many restrictions on this program and so many pitfalls for the injured worker that it is extremely unlikely that the community college program will turn out to benefit any significant number of workers. At any rate, it is absolutely clear that this largely inaccessible community college benefit does not begin to address the very real and devastating loss caused by reclassifying shoulders as scheduled members.

Notably, Cownie didn't campaign for re-election on his leading role in reshaping workers' compensation, one of many far-reaching bills Republicans passed without a single Democratic supporter in the Iowa House or Senate. Instead, his television commercials highlighted his supposedly bipartisan efforts on issues such as mental health reform. Cownie played no part in drafting a major mental health bill or advancing that cause. He simply voted for the final legislation, as did every other lawmaker in both chambers.

While soon-to-be-former Representative Cownie lost a prestigious job on November 6, thousands of less fortunate Iowans will lose much more in years to come, thanks to his legislative work.