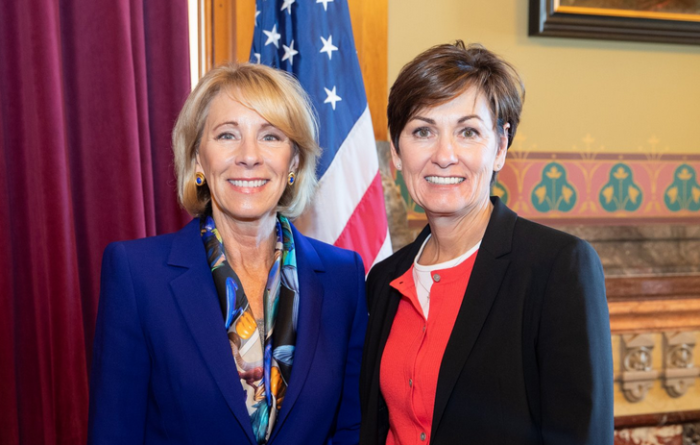 Public education lines have been drawn. Time to pick a side

Governor Kim Reynolds' private school and voucher activism has gone from coy to brazen. Simply entertaining "Secretary of Education" Betsy DeVos at the state capitol is a signal. Reynolds has never been a credible supporter of public education and now has publicly chosen a side. She chooses the 8 percent of Iowans whose kids attend private schools over the 92 percent who attend public schools. Reynolds has thrown down the gauntlet.

Now, an important question for you. Yes, YOU. Sitting in your comfy chair reading this post. Do you support Iowa's public schools - or not? Time to make a decision.

Governor Reynolds often stood by Terry Branstad's side, enthusiastically nodding and clapping when visiting Iowa's private schools. She stood idly by while Branstad created a category of homeschoolers where it was ok for kids never to been seen or counted again, let alone monitor their educational progress.

Kim Reynolds did not protest when Branstad underfunded our schools for the past ten years. In fact, she joined in this year, supporting and "celebrating" a 2 percent increase, far below the rate of inflation and not nearly enough for schools to survive on.

It's not just a problem in K-12 land. Branstad/Reynolds also presided over the underfunding and gutting of Iowa's state universities. Our highly-ranked institutions are taking it on the chin as their rankings fall and programs are gutted. Medicaid cuts are also taking a toll on the University of Iowa's award-winning hospital, which had to drastically cut down on dental appointments for Medicaid patients. Its maternal health center that saves high-risk moms and babies hasn't received a real raise from the legislature in fifteen years.

The Area Education Agency system that many school districts rely on to provide training, special education services, therapists and mental health services was slashed again this year and forced to downsize and consolidate services again. This hardly makes sense as we're supposedly gearing up to take on childrens' mental health challenges.

The gloves came off on Friday, March 15. Reynolds made the fateful decision to meet with Secretary DeVos. In case you've been living in a cave for two years, DeVos is best known for her crusade in Michigan to create a charter school system and to donate to and elect conservative politicians who would further her vision. Here is a chilling article that details the DeVos family's presence in Michigan and how they brought public education to its knees there. From the article:

Throughout his adult life, Betsy’s father, Ed Prince, donated handsomely to two religious colleges in Michigan, Hope and Calvin, the latter being his wife’s beloved alma mater in Grand Rapids. But his most important contribution—one that has shaped much of the past three decades of conservative politics—came in 1988, when Prince donated millions in seed funding to launch the Family Research Council, the conservative Christian group that became one of the most potent political forces on the religious right. “Ed Prince was not an empire builder,” Family Research Council President Gary Bauer wrote to supporters after Prince’s sudden death in 1995. “He was a Kingdom builder.”

During the Vilsack administration, Democrats and Republicans in the Iowa legislature already made the fateful decision to step into the business of funding Iowa's private schools. Iowa law allows individuals to give money to private schools and receive a 65 percent tax credit. The program for "Student Tuition Organizations" (STOs) has grown from $8 million per year in 2006 to $12 million in 2018. Republican lawmakers and the governor want to raise it again to $20 million per year. Private schools already receive funding from Iowa taxpayers to the tune of $37 million per year - for transportation equity, special education services and technology and books.

This is money that Iowa students no longer have for public schools and public services. Iowa has paid a total of nearly $100 million to private schools - just in STO tax credits - since 2008. If you figure that a new teacher costs $60,000 per year, with salary, benefits and pension included, you could hire 1,667 teachers with that money.

When this legislation passed, I was serving on the Dowling Catholic High School board of education. I saw the numbers for private schools all around the metro. Most of the schools have shrunk in size and some are on life support. I know that STOs, and now vouchers - are the only way private schools will survive into the future. As Iowans, we need to decide if we are ok with funding and supporting two school systems. One for private schools - who can pick and choose those who attend, openly discriminate against faculty, staff and students. And one for everyone else. This is Betsy DeVos' vision for America.

DeVos came to Iowa to talk about "Freedom Scholarships," which would add a federal tax credit to the mix - at 100 percent deductibility. Yes, that's right. America's richest people would be able to sink their money into private schools, and the American taxpayer would lose the proceeds that would result from that otherwise taxable income. Of course, President Donald Trump supports this plan. He has a lot in common with DeVos. Both are billionaires who have never had a meaningful connection with public schools.

DeVos has not minced words. She openly supports private religious schools and her actions show that she doesn't care if her policies hurt public schools. Read more here about what DeVos' policies did to devastate Detroit's public schools.

By inviting DeVos to Iowa and entertaining her warped ideology about private school tax credits, Reynolds is endorsing and supporting this idea. There's no question where she stands. The people she invited to attend this closed-door meeting are indicative of her intentions. Only Republican Senators and private school lobbyists were invited. Drew Klein, from the Koch brothers-funded Americans For Prosperity was also in attendance. Remember, Mr. Klein was among the invited guests when Branstad signed the ruinous bill gutting public employee collective bargaining rights in 2017.

Ryan Wise, director of the Iowa Department of Education, was also present for last Friday's meeting with DeVos. Having worked closely with department directors in Iowa and served on two state boards, I know without a doubt that department directors in Iowa get their marching orders from the governor's office. Wise was most likely invited as a courtesy. When I saw the sheepish look on his face as he left the meeting - I knew. He was embarrassed and ashamed to have been there.

Waterloo Superintendent Jane Lindaman voiced her concerns that she was the only person in the meeting who represents a public school district. Though Reynolds said she would get input from "businesses, parents and educators if the plan moves forward," it's telling that parents and teachers were left out of this first meeting, but private schools and business interests were well represented.

The question is: WHO IS STANDING UP FOR IOWA'S PUBLIC SCHOOLS AND STUDENTS?

I've decided to take a personal stand. I am pledging my full support to Iowa's public schools. 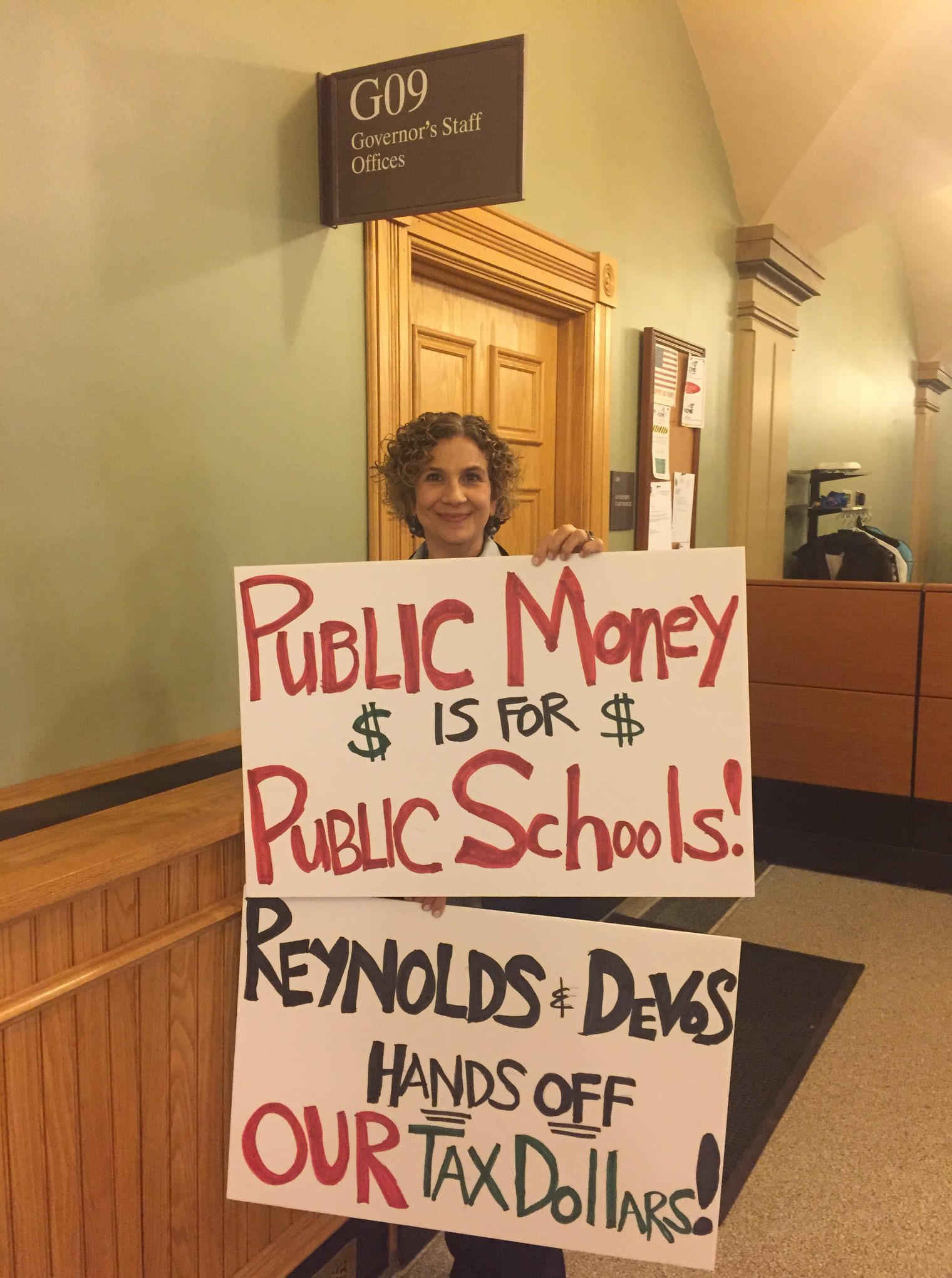 I was inspired by several courageous school boards, which have approved official statements opposing vouchers and other programs that would undermine public school funding. Thank you to the school boards in Cedar Falls, Waukee, and Norwalk for taking a strong stand against vouchers and other intrusions on public education funding.

If you are an elected official, feel free to use my blank form here (downloadable in .docx or .pdf format). 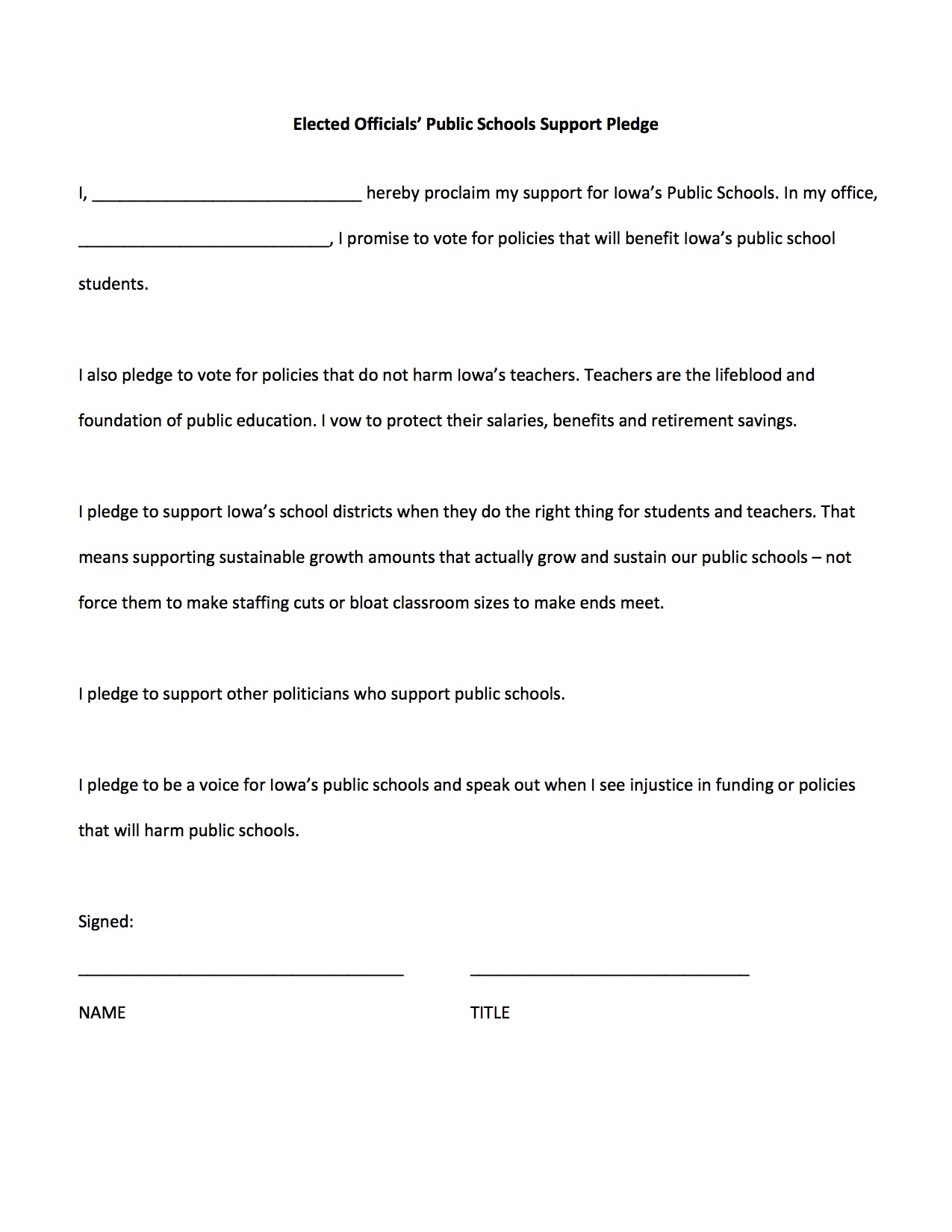 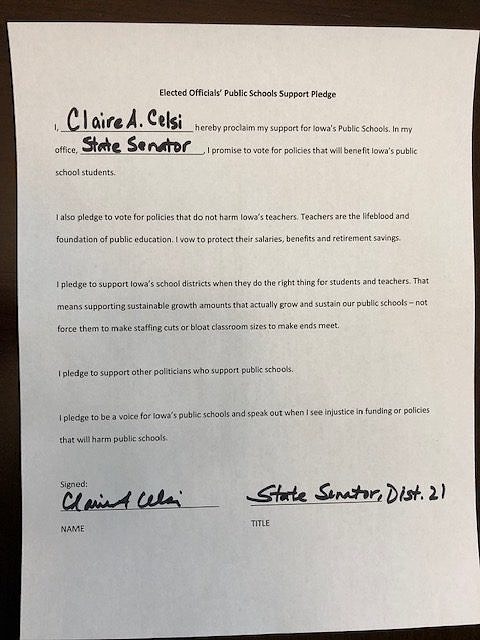 Teachers and parents, please make your own pledge and share it too!

It's time to pick a side.

Top image: U.S. Secretary of Education Betsy DeVos (left) and Governor Kim Reynolds in Des Moines on March 15, cropped from a photo posted on the official Facebook page for DeVos.