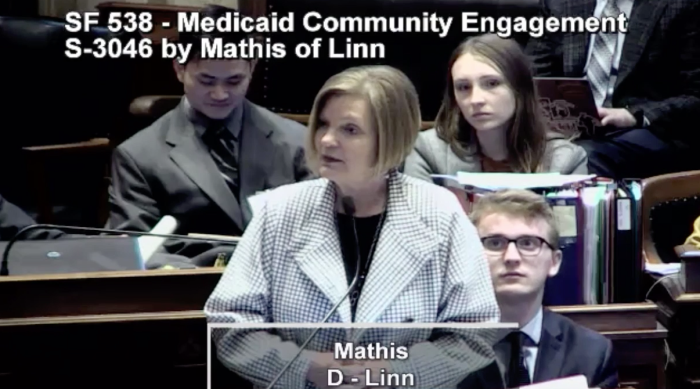 Iowa Senate Republicans on March 19 approved new work requirements for tens of thousands of Iowans on Medicaid or receiving food assistance. Senate File 538 would instruct the Iowa Department of Human Services to request a federal waiver for the Iowa Health and Wellness Plan, our state’s version of Medicaid expansion. Approximately 170,000 adults receive Medicaid through that plan, and roughly 61,000 of them also receive Supplemental Assistance Nutrition Program (SNAP) benefits.

If the waiver were approved, Medicaid recipients would face new reporting obligations for “community engagement.” If not part of an exempted group, they could lose coverage due to paperwork errors, even if they were working the requisite number of hours per week. Nonpartisan analysis estimated this bill would cost the state budget nearly $5 million the first year after the waiver and nearly $12 million each subsequent year.

During floor debate (beginning at 11:53:20 of this video), Republicans characterized the bill as a way to hold Iowans accountable. Democrats offered two amendments that would have extended that accountability to large employers and the for-profit insurers known as managed-care organizations (MCOs), which oversee Iowa’s privatized Medicaid.

State Senator Joe Bolkcom offered the first amendment, which would have instructed the Department of Human Services to collect data on businesses with 50 or more employees where Iowans on Medicaid are working. The fiscal impact would be minimal, because under Senate File 538, Medicaid recipients would already have to tell the department where they were employed each time they submitted proof of compliance with the work requirements.

Bolkcom exempted companies that employed less than 50 people, on the grounds that small businesses may not be able to afford to provide health insurance, especially in rural counties that are struggling.

But many large corporations that could provide insurance don’t, Bolkcom noted. Some are notorious for giving employees just enough hours so as not to trigger the Affordable Care Act’s mandate employer health insurance.

A new DHS database would inform Iowa taxpayers which companies they are subsidizing by paying for employees’ health care through Medicaid. This would nudge the “freeloader” companies to do the right thing, the very thing that SF 538 is proposing to do with current Medicaid and SNAP enrollees.

Republican Senator Jeff Edler asked the body to resist the amendment, which, he argued, would discourage businesses from employing Iowans on Medicaid.

Now think about that. We are already looking to give Medicaid and SNAP beneficiaries more red tape and hoops to jump through in order to stay on the rolls. But the big employers, often out-of-state entities, are exempt from reporting whether or not they offer insurance benefits to employees.

These corporate giants are killing Iowa’s small towns, and their business practices have contributed to rural poverty. You can see who has their back, though: Republicans rejected Bolkcom’s amendment along party lines.

State Senators Liz Mathis and Amanda Ragan offered a second amendment. Their proposal would block DHS from enacting the federal waiver until the department had verified “that there are no outstanding participating Medicaid provider claims that have not been paid in excess of one year from the date billed.”

Despite contract language requiring for-profit insurers to pay claims within 120 days, MCOs have often taken more than a year to pay for health care services. This puts a terrible strain on providers, especially in rural areas. The Iowa Hospital Association recently stated that 18 percent of rural Iowa hospitals are at risk of closing, in part because of Medicaid reimbursement problems.

Some bills pending in the legislature this year would provide incentives for medical professionals to stay in rural counties. Yet we are letting the MCOs get away with not paying the bills of those already practicing in Iowa.

Some 400 nursing homes in Iowa rely on Medicaid and are struggling to stay open, because of late reimbursements or non-payment for services.

Senators vigorously debated this double standard on the Senate floor. The hypocrisy of punching down on vulnerable Iowans while giving a pass to employers and the MCOs is not new.

Republicans then approved the bill on the same party-line, 32 to 17 vote.

SF 538 is as much a campaign ad as anything else. It is also designed to continue to propagate myths about those in poverty, that they are somehow gaming the system.

During debate, Republican Senator Jerry Behn justified the bill with an anecdote: one constituent told him he saw someone going into Walmart wearing pajama pants at noon. Never mind the prejudice contained in that justification. The very reason small towns are dying is in plain sight if we want to open our eyes.

We have subsidized health care for Walmart for decades. Now that subsidy has skyrocketed health care costs for the shrinking number of Iowans who can afford it. Rather than embrace the future and work to make health care affordable for all Iowans, we are dividing the haves from the have-nots and pitting them against each other.

That is the opposite of leadership.