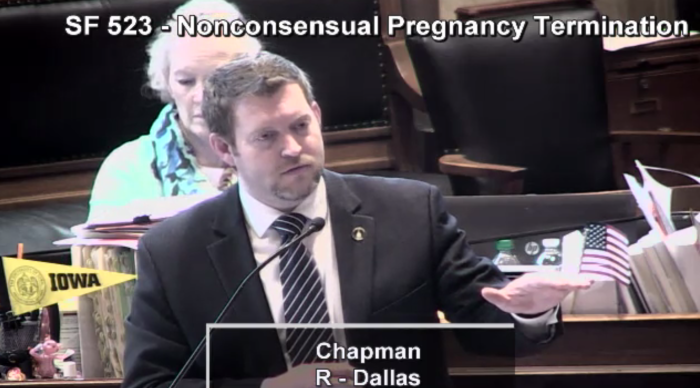 A tale of two personhood amendments

Two years ago, State Senator Jake Chapman's Republican colleagues slapped down his efforts to force a Senate vote on language declaring that life begins at conception, with every fertilized egg "accorded the same rights and protections guaranteed to all persons."

This week, Republicans helped Chapman accomplish what he failed to do then: sneak "personhood" language into a bill during Senate floor debate.

Chapman was among 21 senators who co-sponsored a bill in 2017 to declare that life begins at conception. Key passage:

That personhood bill never made it out of the Senate Judiciary Committee, despite support from the committee chair Brad Zaun.

When the Senate took up a 20-week abortion ban a couple of weeks later, Chapman offered a "strike-after" amendment replacing the whole text with language about life beginning at conception. As Matt Chapman recounted here, Republican Senator Mark Chelgren (himself a co-sponsor of the personhood bill) rose on a point of order, arguing the amendment was not germane to the bill. Senate President Jack Whitver ruled the point well-taken.

Chapman then took the extraordinary step of attempting to suspend Senate rules to allow debate on his amendment. Only sixteen Republican senators supported his motion, and the chamber moved on.

"BAIT AND SWITCH" WORKED THIS TIME

Senate File 523 wasn't supposed to be a controversial bill. Its original text increased penalties for crimes related to "nonconsensual termination of and serious injury to a human pregnancy," such as when someone "intentionally terminates a human pregnancy without the knowledge and voluntary consent of the pregnant person," or causes miscarriage or serious injury to the fetus while committing a felony. Senate Judiciary Committee members unanimously voted to advance the bill earlier this month.

Chapman filed two amendments on March 26, the day the bill was on the Senate's debate calendar. He withdrew the first, then offered a strike-after amendment changing numerous Iowa Code references from "human pregnancy" to "unborn person" and from "termination" in the context of a pregnancy to "death." The amendment defined “unborn person” as "an individual organism of the species homo sapiens from fertilization to live birth."

Speaking for his amendment (starting at 4:55:00 on this video), Chapman explained the bill would increase penalties for those who "kill a child in the womb," making them consistent with penalties for "killing someone outside of the womb." By changing the wording from "terminates a human pregnancy" to "causes the death of an unborn person," Iowa lawmakers would "call it what it is" and recognize "that is a person in the womb."

Chapman asserted, "This does not relate to abortion." While he's a strong opponent of abortion, his amendment "does not address that. This is non-consensual. This is against a mother's will."

One section of the amendment states that actions causing the death of an unborn person "do not apply" to "an approved medical procedure performed by a person licensed in this state to practice medicine and surgery or osteopathic medicine and surgery." Nevertheless, the implications for abortion rights are obvious if any portion of Iowa Code classifies every fertilized egg as an "unborn person."

Petersen argued (starting at 4:59:55 on this video) that the amendment was not germane, since it "turns this legislation into a personhood bill, which is quite extreme and unconstitutional."

"This bill could prevent Iowans from starting a family using in vitro fertilization and surrogacy that relies on IVF practices," Petersen warned. It also had no language protecting "common forms of family planning, including IUDs and birth control pills."

Finally, she said, Chapman's amendment "could open the door to investigating all pregnancy loss, coming after women at some of the hardest moments of their life, after losing a baby to miscarriage and stillbirth." (Petersen has experienced late pregnancy loss due to a cord accident.)

Chapman took issue with Petersen's assessment. Only "a crime triggers this penalty," he insisted, denying it would have any impact on in vitro fertilization. All 31 Republican senators present voted for the amendment, while all eighteen Democrats voted against it. (The newest Democratic senator, Eric Giddens, was sworn in on March 25.)

State Senator Rob Hogg spoke against the bill, noting the previous language "contemplated that people had to know or reasonably should have known that the woman was pregnant." Chapman's language "takes away the knowledge requirement." So for example, if a young person commits a robbery, and the stress of that event causes a miscarriage, "we're now saying that person should go to prison for life." Current law would say that's a class C felony, punishable by up to 10 years.

Exposing people to penalties for a class A felony "without even knowing a woman is pregnant" is bad criminal law, Hogg argued. A drunk driving accident causing a miscarriage could now lead to a 25-year prison sentence, even if the driver had no way of knowing the woman in the other vehicle was pregnant.

Chapman countered that current law already allows for felony charges against those who kill someone while driving drunk. His bill merely makes clear that causing the death of an "unborn child" won't produce a lesser charge: "Finally we have a bill that recognizes the dignity and the rights of that human child in the womb. The same as the human life that's carrying that child." In closing, Chapman again claimed the bill "is about protecting non-consensual termination," not abortion.

Senators approved the bill on another party-line 31 to 18 vote.

After the debate, Petersen told reporters Senate President Schneider “pulled a bait and switch” by allowing debate on Chapman's amendment.

Senate File 523 now sits in the House Judiciary Committee, which must pass it by April 5 to keep it alive following the Iowa legislature's second "funnel" deadline. State Representative Mary Wolfe, a criminal defense attorney and the ranking Democrat on that committee, has raised the same objections as Hogg. A person with no knowledge of a pregnancy (and therefore no intent to terminate that pregnancy) could be sentenced to life without the possibility of parole under this bill.