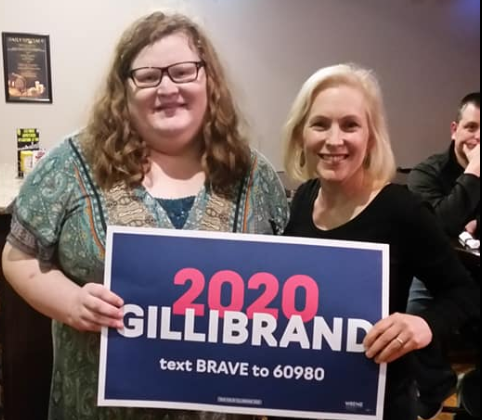 Why Kirsten Gillibrand is best candidate for trans people in 2020

Well, you may be wondering. Why did Kyla Paterson say U.S. Senator Kirsten Gillibrand of New York was the best? South Bend Mayor Pete Buttigieg is the first openly gay presidential candidate, and Senator Bernie Sanders (independent of Vermont) has been fighting for civil rights for over thirty years, so why would she choose Gillibrand?

Those are one hundred percent valid questions. LGBTQIA+ issues are a top concern for me as chair of the Iowa Democratic Party’s Stonewall Caucus. In that context, I prioritize trans issues, being the first ever transgender caucus chair.

The first question, why I am not supporting Mayor Pete or Sanders, is honestly the easiest to answer. Both are admirable and live to serve people, but there is something that distinguishes Gillibrand from them. It’s the same thing I have noticed through the last five years I have been following the senator’s political career.

She stands out from the pack, and her ability to talk about trans issues is one way she separates herself from the pack. She does not just talk the talk. She walks the walk as well.

You may be thinking, “Whoa, what about the work Bernie Sanders has done?” You see, as much as I like what Sanders brings to the table, I am kind of disinterested in his method. You see Gillibrand’s work in the Senate particularly relating to trans people in the military. She brought trans people to the room, she brought them to the table to tell their reality, their stories.

That was personal for me. As a young trans woman, seeing a candidate prioritize people who are trans means the world. While politicians like President Donald Trump and Senator Ted Cruz have said constantly that trans people aren’t fit to serve, Gillibrand believed otherwise and has proven why we have a right to serve.

She has also been leading the charge to get rid of Trump’s transgender military ban, which is immoral and discriminatory. She’s been batting for us for a while, and guess what? When I read about her advocacy from giving trans people a platform to speak, to being arguably our biggest ally for us in the Senate, I was sold. She’s even highlighted the issues that hurt our most vulnerable members of the community: trans people of color and especially trans women of color, something not often discussed in the public sphere.

In addition to all of that amazing stuff, I connected well with her and her campaign staffers, who were very receptive. They were quick to get to me to talk about trans issues. I was impressed that fighting for trans liberation was a priority for her campaign. I know Senator Cory Booker of New Jersey also is talking about the issue, but Gillibrand has a different tone. She’s not just an ally, she wants to get in the fight with us.

Not many presidential candidates are willing to say they’ll be there for the trans community like she has. One more thing: I want to highlight what she said to me after I endorsed her in Des Moines:

“If I had a trans child, I would want to fight for them. They deserve every bit of protection and every bit of opportunity. That every other child in America deserves.”
Senator Kirsten Gillibrand
Peace Tree Brewery in Des Moines, January 19, 2019

I don’t know about you, but I feel fired up, I feel counted, and I feel confident in Gillibrand’s support and allyship with the trans community. I feel even better after watching her New York City kickoff rally, where she gave trans women a platform to speak. I feel inspired and I hope you do too.

Now, I am not saying she’s the only candidate trans people should support. I am saying she’s worth our time, especially because we’re worth her time. There may be other issues that drive you besides being trans, but right now Gillibrand is talking about trans issues and I feel excited by her drive to make those issues a priority for Democrats in 2020. Support who you want in the end, but I highly recommend Senator Kirsten Gillibrand of New York for president of the United States.