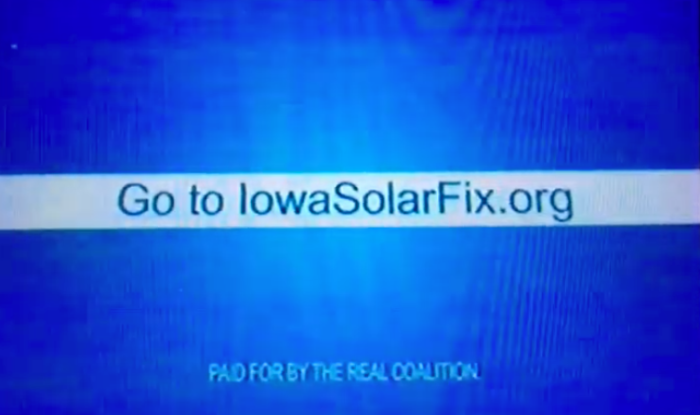 A group that popped up this year to support MidAmerican Energy’s solar bill spent $1.25 million on television commercials alone, as well as at least $11,000 on Facebook advertising and an undisclosed sum on direct mail.

The REAL Coalition conceals its donors and board members but appears to be funded primarily by utility companies and the industry’s trade association.

A FRONT FOR MIDAMERICAN

The REAL Coalition postures as a voice for “Iowa consumers, farmers and businesses on the energy issues affecting our state.” Although MidAmerican has not admitted to being the group’s leading financial backer, evidence points to that conclusion. Since its incorporation in January, the organization has engaged in no discernible activity other than attempting to generate public support for the bill known as Senate File 583 or House File 669.

MidAmerican helped draft that legislation, which would impose new fees to make investing in PV systems uneconomical for most homeowners and small businesses. Days after the bill dropped in the Iowa House and Senate, the REAL Coalition began advertising on social media and in major Iowa television markets. (State senators approved the legislation in March, but opposition from about a dozen House Republicans kept the bill from coming to a floor vote in the lower chamber.)

Citing Federal Communications Commission documents, Dave Anderson and Matt Kasper of the Energy and Policy Institute revealed on April 30 that the ad buyer for the REAL Coalition has previously been hired by MidAmerican Energy and the Iowa Utilities Association. Moreover, “An Energy and Policy Institute review of NAB [National Association of Broadcasters] forms also finds that MidAmerican stopped running advertisements in Iowa around the same time the REAL Coalition’s campaign began.”

My review of FCC files turned up contracts with Iowa television stations totaling $1.25 million–a lot to spend in a six-week period, even for a deep-pocketed corporation or trade group.

THE REAL COALITION CAMPAIGN ON TELEVISION

The REAL Coalition didn’t upload their television ads to YouTube, the “videos” page of the group’s website, or its social media feeds. So I don’t have a high-quality recording of the two spots that were in heavy rotation, but I captured one of them on my phone. The other was similar in content, except that it featured a younger couple. KCRG-TV posted parts of that commercial in this news report.

Male voice-over: Retirement is great. But on a fixed income, you’re always looking to save money.

Take your electric bill. Did you know that people with solar don’t pay to use power lines like the rest of us? Or to keep the power grid safe and running?

That makes our bills more expensive. That’s not fair.

If you want solar, great. But don’t make everyone else pay for it. If you agree, go to IowaSolarFix.org.

Viewers who click on IowaSolarFix.org will land on the “take action” page of the REAL Coalition website, where they can send a generic e-mail to their state representative. I’ve posted the text at the bottom of this post.

Hundreds of thousands of people were exposed to these tv ads many times. The utility company’s talking points are false and “rely on average Iowans not understanding how the grid works,” in the words of Iowa Environmental Council energy program director Kerri Johannsen. I’ve enclosed below a document refuting MidAmerican’s arguments in more detail.

I searched the FCC political files for every Iowa-based commercial television station. (I found no record of the REAL Coalition advertising on any Omaha-based stations that reach parts of southwest Iowa.)

This table shows the REAL Coalition’s total spending on fifteen tv stations in March and April. For weekly ad buys, click on this downloadable spreadsheet (xls).

A note on methodology: I used the numbers stipulated in signed contracts. The REAL Coalition might have been invoiced for a slightly smaller amount later, if other programming pre-empted any of its planned spots. Nevertheless, these figures should be close to the dark money group’s actual spending on television advertising.

A shout-out to the unnamed KCCI employee who repeatedly tried to obtain the names of the REAL Coalition’s executive officers or board members, as Anderson and Kasper described here. I found no record of other stations’ personnel digging for that information.

The REAL Coalition paid for several direct-mail pieces in March, designed to push voters to contact their state representatives or senators about the solar bill. I have not been able to determine the cost of the direct mail campaign, but it was likely in the six figures. A reader in Dubuque provided these images. Mailings in other communities were identical, except for the legislators’ names. 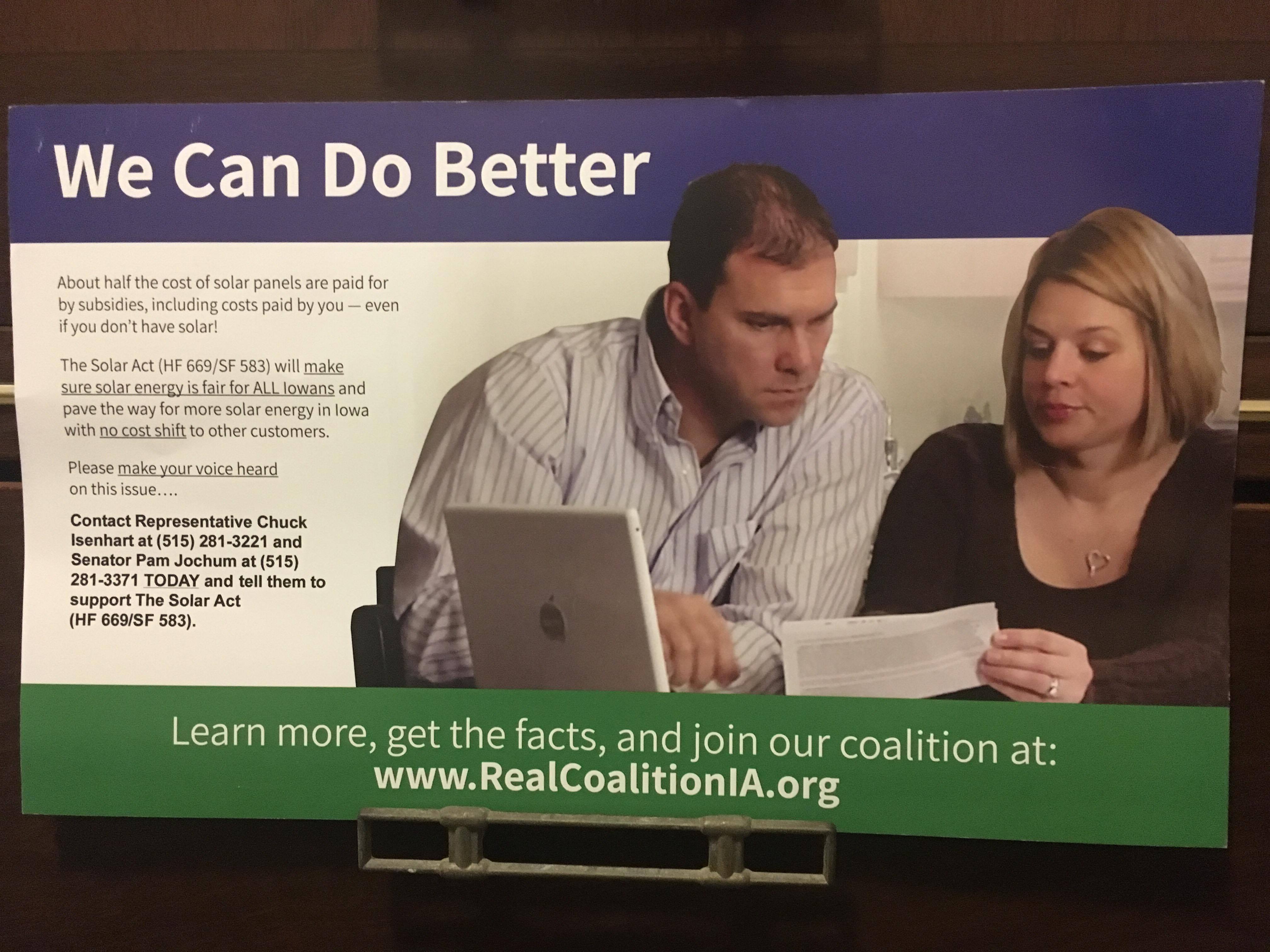 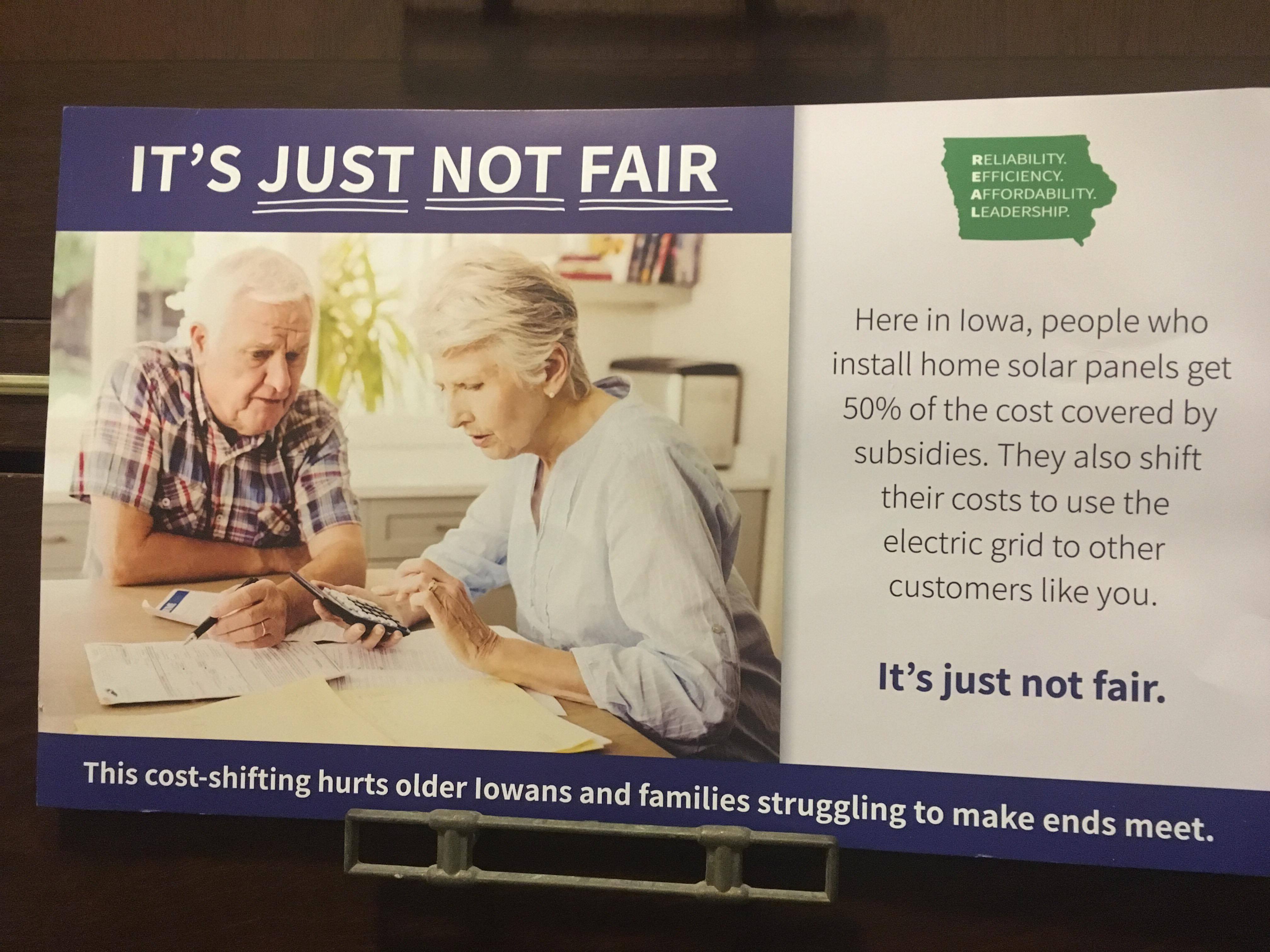 One advantage of hiding behind dark money: the REAL Coalition can confuse the issue by conflating energy policies that have nothing to do with each other. For instance, “50% of the cost covered by subsidies” is a reference to the solar tax credit, which MidAmerican’s bill doesn’t address. In fact, the utility has profited from using renewable energy tax credits as it developed large wind farms.

In March, I asked communications staff for MidAmerican whether the company believes tax credits for wind or solar energy should be phased out. Answer: “No.”

Is it MidAmerican’s position that tax credits for wind or solar energy place an unfair burden on consumers who do not invest in renewable production? “No.” 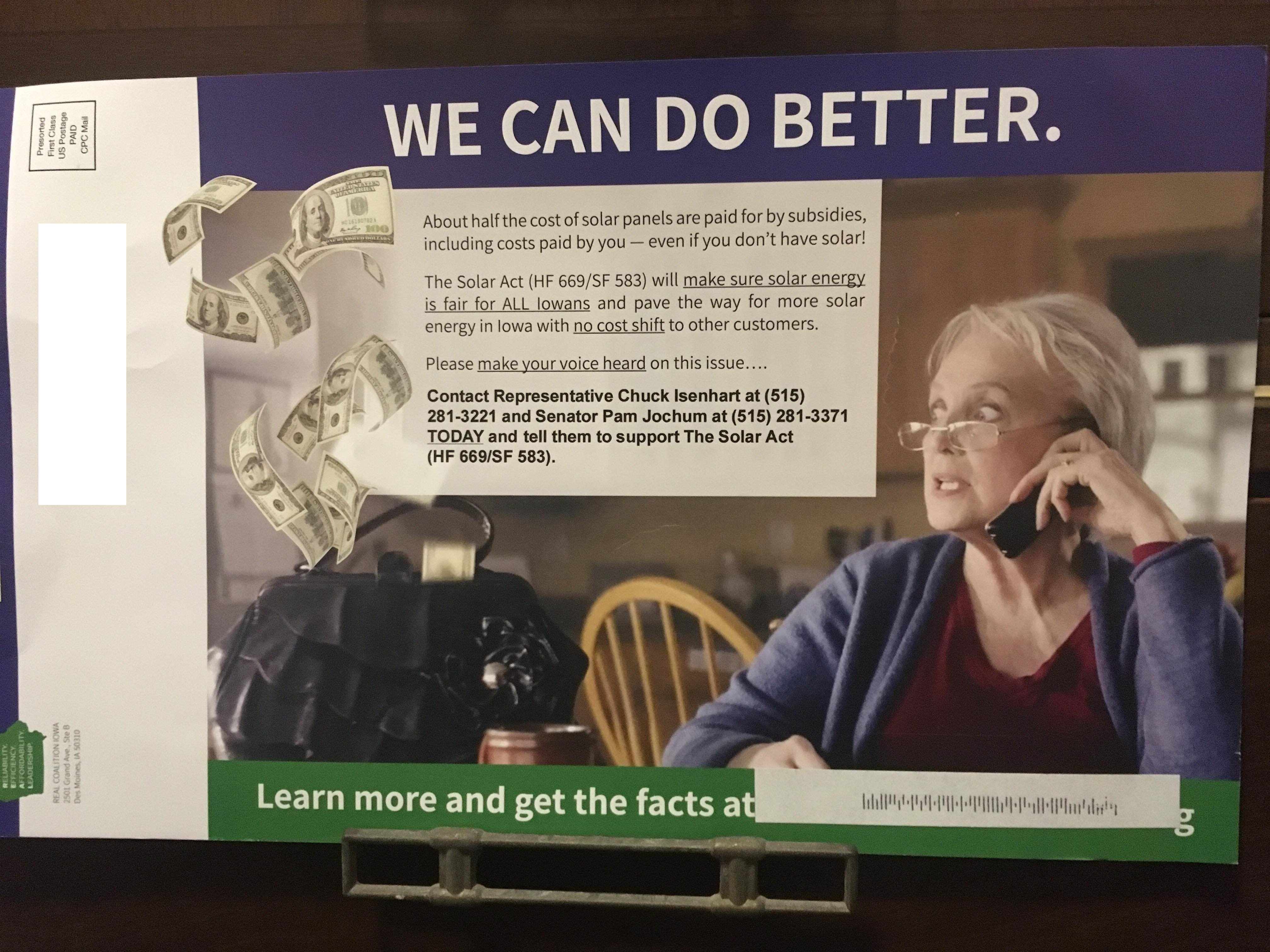 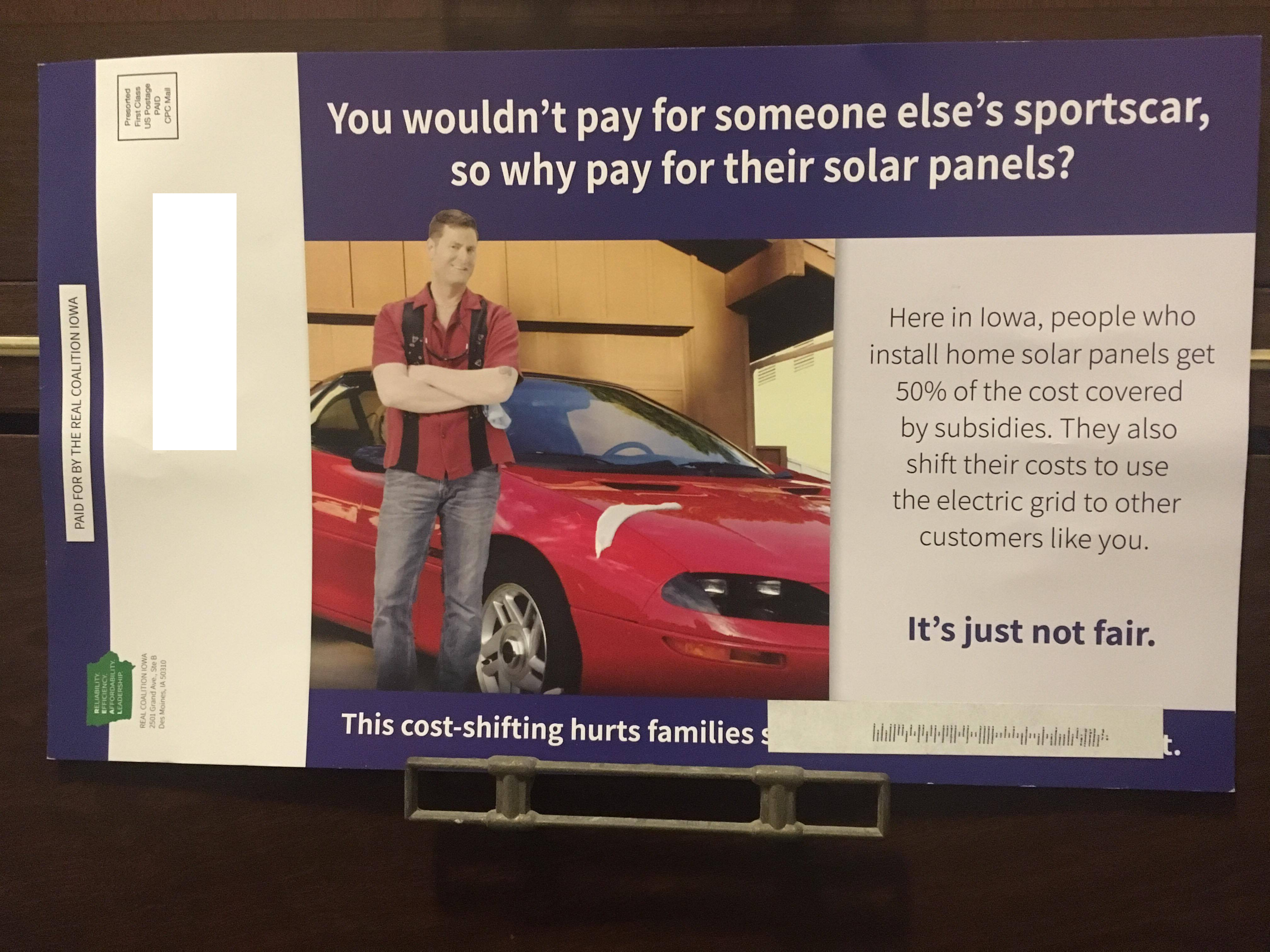 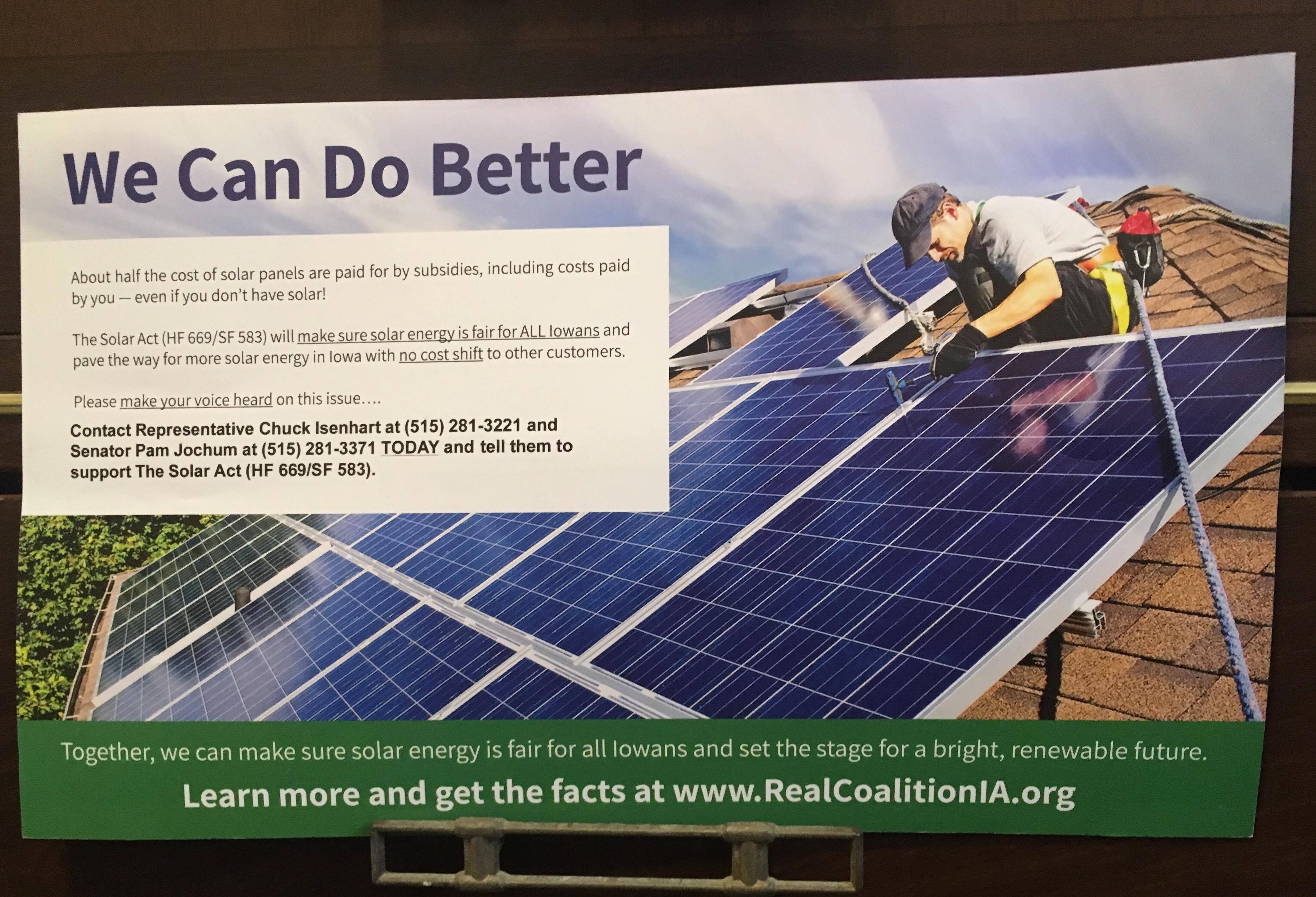 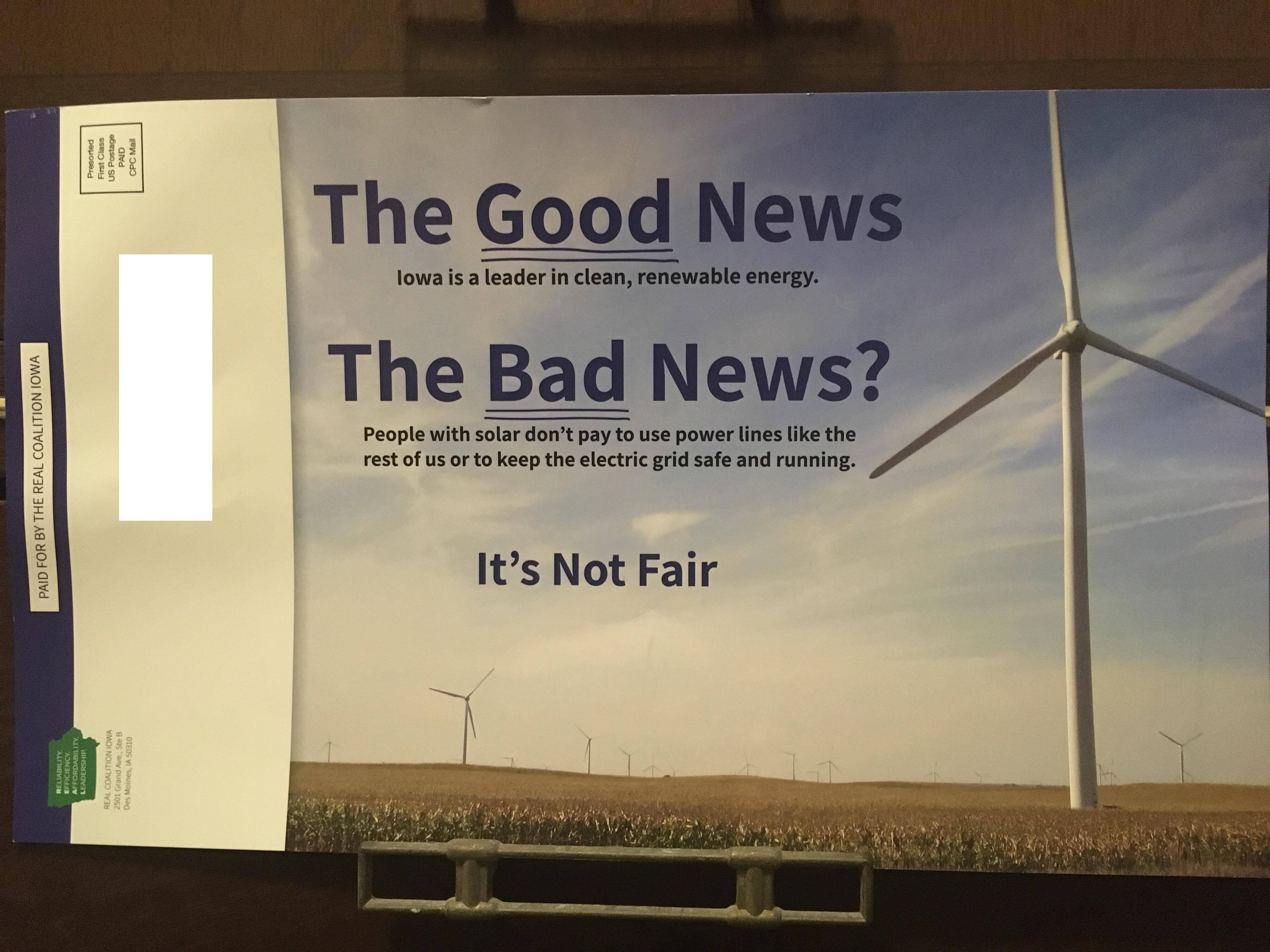 Repetitive posts on the REAL Coalition’s Twitter feed and Facebook page contained similar messaging right up until April 27, when the legislature adjourned for the year.

Mark Langgin discussed the REAL Coalition’s social media campaign in this post from early March. You can view all of the group’s paid Facebook ads here; cumulative spending was $11,106.

Anderson and Kasper noticed that

The Edison Electric Institute, the trade association for investor-owned utilities like Iowa’s MidAmerican Energy and Alliant Energy, also spent money on Facebook advertisements that advocated for the passage of the SOLAR Act through its “grassroots” group We Stand For Energy.

Looking through that group’s Facebook ad archive, I couldn’t calculate exact spending to promote MidAmerican’s bill. “We Stand For Energy” put less than $100 behind its typical Iowa-focused ad, whereas it spent more pushing terrible policy in some other states.

Some House members received quite a few boilerplate messages generated by the REAL Coalition’s advertising, but the astroturf campaign didn’t shake loose many votes. MidAmerican’s bill spent weeks on the House “unfinished business” calendar before being sent back to the Commerce Committee as lawmakers adjourned last weekend.

No Democrats publicly supported House File 669, even though a number of labor unions were lobbying for it. A solid bloc of Republicans held together against the legislation, thanks to an alliance among solar installers, environmental groups, and the Iowa Pork Producers.

So did the REAL Coalition waste MidAmerican’s money? Not necessarily.

The journey of the Iowa Farm Bureau’s faux “water quality” bill provides a cautionary tale. More than a dozen House Republicans kept that worse-than-doing-nothing plan from advancing during the 2017 legislative session. However, the Farm Bureau and their well-placed allies, including Governor Kim Reynolds, kept up the pressure on the holdouts during the summer and fall. By the time the legislature reconvened in January 2018, House leaders had the votes to send the bill to Reynolds.

Those same leaders are committed to passing MidAmerican’s bill. As soon as they have 51 supporters, they can get House File 669 through committee and onto the floor at any point during the 2020 legislative session. Having spent more than $1.25 million on this project, the corporate interests funding the REAL Coalition are unlikely to walk away without re-engaging this fight next year.

Appendix 1: Links to the REAL Coalition folder in the Federal Communications Commission political files for every Iowa television station that ran the group’s commercials. These files provided the data entered in my spreadsheet. Stations are listed in descending order, from largest to smallest total ad buy. The files can be confusing, since advertising contracts are often revised to add spots. Where several contracts covered the same week, I used only the final version for my calculations.

Appendix 3: Standard text of e-mail visitors can send to their state legislators through the “take action” page of the REAL Coalition’s website

As a constituent, I write to urge you to support HF 669/SF 583. This bill restores fairness to consumers that has been undermined by today’s existing solar generation policies.

Under today’s policy, when someone puts up solar panels, not only do they reap the taxpayer-funded benefits worth up to 50% of their cost, but they also shift their cost to use the electric delivery system onto other customers like me. That’s not good policy and it’s not fair to consumers.

HF 669/SF 583 ensures new private solar generators pay a nominal amount to cover the costs their solar panels cause – it doesn’t affect people who already have panels in any way. It makes future solar fair for all consumers.

Passing HF 669/SF 583 sets the stage for larger-scale solar energy production we can all benefit from – and doesn’t shift costs from one consumer to another. Getting 50% of a project paid for in tax incentives ought to be enough without needing me to pay for someone else’s solar panels on my bill.

Don’t be fooled by the special interests opposing HF 669/SF 583 and their misrepresentations. Residential solar and utility solar will both grow by passing this bill into law.

Please keep the interests of ALL of your constituents in mind and vote YES on HF 669/SF 583 to fix the solar cost shift.