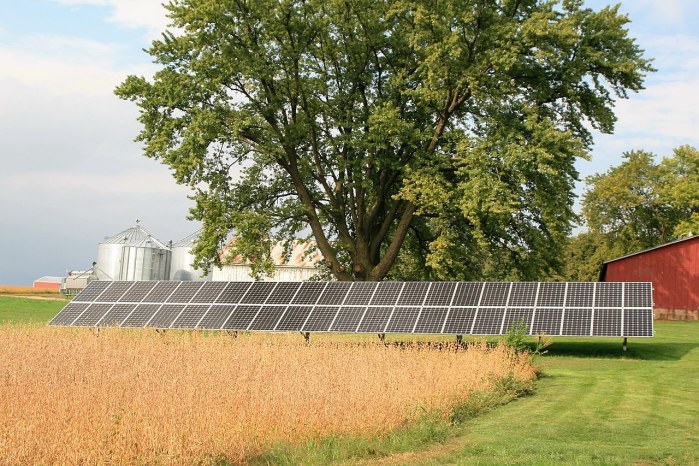 As state lawmakers wrap up their work for 2019, one of the biggest question marks surrounds MidAmerican Energy's push to make future solar development unaffordable for most Iowa homeowners and small businesses.

Four weeks after the bill cleared the Iowa Senate, it is still hung up in the House, where a group of Republicans recently took an unusual step to signal their opposition.

THROUGH THE IOWA SENATE, MOSTLY ALONG PARTY LINES

MidAmerican helped draft the bill, introduced in the House Commerce Committee in late February, and soon after in the Senate. The legislation calls for new fees on small-scale solar users, which would discourage investment in PV systems.

Although the utility and its dark money allies have framed the legislation as a bid for “customer fairness,” the corporate talking points cannot withstand scrutiny. Last month, the Iowa Environmental Council refuted the arguments promoting what it calls MidAmerican's "sunshine tax" proposal.

As Bleeding Heartland discussed in early March, unusual coalitions formed on both sides of the solar debate. Several influential labor unions joined with utility companies and business groups to lobby for the bill, while heavy-hitters in the agricultural sector joined forces with solar installers and environmental organizations to lobby against it. To get the bill through the Senate Commerce Committee, its proponents amended the legislation to neutralize opposition from the biofuels industry.

The Iowa Senate debated Senate File 583 for more than an hour and a half on March 18 (full video available here). Democratic State Senators Liz Mathis and Herman Quirmbach offered an amendment replacing the bill text with an instruction for the Iowa Utilities Board to report to the legislature after receiving results from three-year net metering pilot programs, which the board ordered the regulated electric utilities to conduct in 2017. Senators rejected the amendment by 28 votes to 19; seventeen Democrats and Republicans Zach Nunn and Mariannette Miller-Meeks supported the effort.

Democratic Senator Kevin Kinney, who is a farmer, offered two amendments that would have exempted agricultural producers from the new fees on solar systems. I was concerned about those amendments, because if MidAmerican had been willing to accept half a loaf, the Iowa Pork Producers would likely have stood down on the bill. That group's opposition has been extremely important in persuading a faction of House Republicans to hold the line.

In any event, most Senate Republicans didn't make a deal with Kinney. His first amendment (exempting all farm facilities) failed by 29 votes to 18; Tom Shipley was the only Republican to join the Democrats. The second Kinney proposal, a narrower exemption for livestock operations, went down by 28 votes to 19. This time, Shipley and Senator Annette Sweeney (a cattle producer) joined Shipley and the seventeen Democrats.

The final vote to pass Senate File 583 was 28 to 19, with one Democrat (Jim Lykam) supporting the bill and three Republicans (Brad Zaun, Thomas Greene, and Tim Kapucian) opposing it.

During the closing speeches, State Senator Joe Bolkcom warned the bill would "take a club to" Iowa's growing solar industry, which supports an estimated 800 jobs.

Mocking MidAmerican's slogan ("obsessively, relentlessly at your service"), Bolkcom said MidAmerican was trying to "squeeze every dime they can" out of businesses seeking to expand renewable energy.

You know, last year Republicans rammed through the demolition of some of the best energy efficiency programs in the country. And they did it on behalf of the powerful, monopoly, protectionist utility companies. And here we are again. [...]

So here we are, obsessively, relentlessly going to bat for the big, powerful, greedy, protectionist monopoly utility company. It's bad for jobs, bad for renewable energy, bad for our health, bad for Iowa.

The House version of MidAmerican's bill, House File 669, got through the Commerce Committee on a party-line vote with no amendments and has been eligible for floor debate since March 8. Floor manager Gary Mohr introduced an amendment on March 20 to conform to the Senate language exempting certain large producers from the new solar fees.

House Speaker Linda Upmeyer and Majority Leader Chris Hagenow haven't brought the bill to the floor--not for lack of enthusiasm on their part. Multiple sources indicate that Upmeyer has pushed her caucus hard on this issue. She is rumored to be leaving the legislature soon for another position and apparently wants to deliver for MidAmerican before she departs.

The House GOP caucus weekly newsletter--a mouthpiece for leadership--in late March accused "Grid Equity Opponents" of trying to "Muddy the Waters" on the bill. Cribbing heavily from MidAmerican's talking points, the newsletter claimed the bill "proposes an equitable change so utility infrastructure costs are not transferred from one electricity customer to another. This relieves end electric customers from subsidizing their neighbors."

So far, Upmeyer has failed to find 51 votes for the solar bill. Anecdotal evidence suggests that at least fifteen House Republicans have told constituents or lobbyists they oppose the legislation. That's far more than the speaker can afford to lose in a chamber with a 54 to 46 GOP majority, even if a handful of Democrats were willing to support the bill as a gesture to organized labor.

House leaders moved House File 669 to the "unfinished business" calendar on April 4. While that can indicate a bill is finished for the session, solar advocates should not celebrate too soon. House leaders can call up legislation from the unfinished business calendar at any time. Last year's bad energy bill stalled in the House for weeks but got through in the closing days of the session.

Klein offered his own amendment, exempting farm operations from any new solar fees but leaving the rest of House File 669 intact. His twelve co-sponsors were Thomas Gerhold and all of the co-sponsors on Paustian's amendment except for Bergan.

These amendments don't look like serious efforts to change the bill text. (If Klein's amendment passed, floor manager Mohr's strike-after amendment would wipe it out, after which Paustian's amendment would be out of order.) Rather, they appear to be designed to send Upmeyer a message: you don't have the votes.

On April 14, I reached out to all House Republicans backing both new solar bill amendments. Most didn't responded to e-mails seeking comment. I was able to reach McKean by phone. Was he concerned that if MidAmerican agreed to Klein's proposal, the path would be clear for a bill that hurts other Iowa businesses and homeowners?

It would be my hope that we don't pass any bill. [...] I certainly am not trying to find a way to make it acceptable for MidAmerican so it will pass what I consider to be a bad bill. I just felt that that amendment was an improvement over the existing language in the bill.

House File 669 is eligible for floor debate anytime this year or during the 2020 legislative session, so opponents must remain vigilant. The "ag gag" bill stalled in 2011, but passed quickly the following year once key lawmakers struck a deal behind closed doors.

Similarly, State Representative Chip Baltimore led a group of sixteen House Republicans to stop a so-called "water quality" bill in 2017. While lawmakers were at home, the Iowa Farm Bureau chipped away at the opposition, and Governor Kim Reynolds let it be known that she wanted her first bill signing to be about water quality. When the legislature reconvened in January 2018, House GOP leaders had the votes to pass the Farm Bureau's bill. Baltimore rebuked his colleagues in an extraordinary floor speech, but the damage was done.

Appendix 1: Full text of Senate File 583, as amended to neutralize opposition from the biofuels industry

Top image: Solar installation on Hoffman Farms in Iowa, September 2016, photo by Mike Brummer of the U.S. Department of Energy, via Wikimedia Commons.