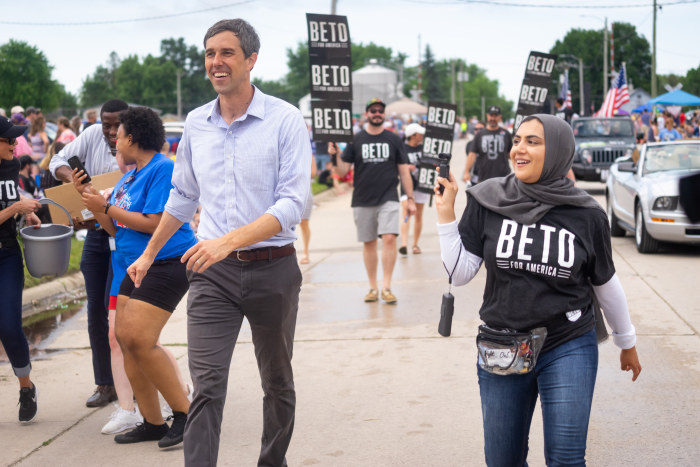 Why I'm with Beto: Every voice should be heard

Danya Rafiqi is press assistant for Beto O’Rourke’s presidential campaign in Iowa. You can follow her on Twitter @DanyaRafiqi. -promoted by Laura Belin

I grew up in a politically apathetic household. My parents voted occasionally, and we might have even put the local nightly news on a couple times a week, but the power of “getting involved” was not something I learned about growing up.

But as a daughter of Pakistani Muslim immigrants, I learned about what to do when someone yelled at me in a grocery aisle, or how to respond to someone when they questioned my American-ness.

And though I remember the moment I realized that I did not have the privilege to ignore politics completely, I can’t remember anyone ever knocking on our door or calling to ask if my parents were going to vote.

Isn’t that something? My community and my life were politicized without my consent, yet our voices were rarely invited into the conversation.

I stumbled my way into politics after going to a Bernie Sanders rally on a whim with my best friend in 2015. With folksy music, patriotic blue drapes, and 27,000 strangers in an arena, it dawned on me that everyone standing in the room was there because they believed their voice had power. Whether it was the pothole down the street or the ability to put food on the table, all 27,000 of us had faith in the promise of our democracy — that this democracy, is in fact, ours.

In that arena, I felt that my story is part of this country’s story, and my voice has the power to move this country forward. I felt like I belonged.

Fast forward to 2019, and that’s the feeling I got when I met Beto O’Rourke.

I first met Beto in Waterloo, where I was working on the Iowa Senate district 30 special election for Eric Giddens. Days after he announced he was running for president, Beto came to encourage folks to volunteer from the back of a red pick-up on a crisp March day. I was struck by the way he spoke about taking no one for granted, and how the best way to ensure we get this country back on track is by bringing everyone into the conversation. Since he travelled to every single county during his U.S. Senate race in Texas, I believe him.

I want a leader who understands that issues of inequality and injustice — from unaffordable prescription drug prices to over-criminalization of communities of color — are reinforced every single time politicians draw constituents out of their districts, leave someone off their lists, and whether intentionally or not, fail to visit their communities.

It’s time we not only call out exclusionary politics for being yet another form of systemic oppression, but match it with a new approach to politics. We need a form of politics that is not just inclusive by name, but is driven by a simple core value — everyone belongs in the conversation.

Beto stands apart from the field because he’s paving the way with consistent, intentional efforts to bring everyone into our democracy. Listening in earnest and learning with humility, Beto recognizes that the only way we will tackle the immense challenges we face is if every voice is empowered.

My mom always told me to believe people when they showed me who they are. And Beto O’Rourke has shown me that he is fully committed to keeping the original promise of this country — this democracy is ours.

Top image: Danya Rafiqi walks with Beto O’Rourke in at the Independence Day Parade in Independence, Iowa. Photo by Beto For Iowa, provided by the author and published with permission.