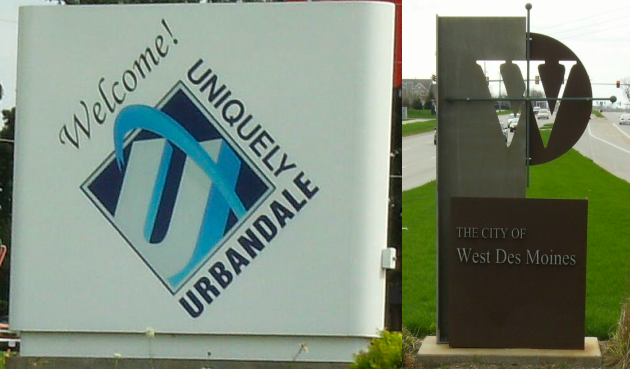 Local government elections in the western suburbs of Des Moines have often been sleepy affairs, with (mostly Republican) incumbents repeatedly coasting to re-election.

But big change is coming in two large suburbs, as every Republican city council member in Urbandale and West Des Moines has decided not to seek another term this November.

Republicans have long dominated city government in West Des Moines (Iowa’s eighth-largest city) and Urbandale (our state’s twelfth-largest city and the third-largest central Iowa suburb after West Des Moines and Ankeny). But Democratic candidates for president, Congress, and governor have steadily improved their vote shares in these areas, and Democrats now represent all the Iowa House districts containing most of Urbandale and all of West Des Moines.*

Although local elections in Iowa are nonpartisan (meaning no one’s party affiliation is mentioned on the ballot), many voters seek out candidates with similar leanings, and candidates often GOTV largely within their own political party. Polk County Democratic activists have increasingly focused on recruiting strong contenders for city elections. One result: Renee Hardman upset a “complacent” GOP incumbent in the 2017 election for an at-large council seat in West Des Moines.

WHERE THINGS STAND IN URBANDALE

In Urbandale, all city council members are elected at large, and the three incumbents whose terms end on December 31 announced in recent weeks that they will retire.

Creighton Cox was first elected in 2011 and said in a statement earlier this month that he plans to focus on his new job as Turn Construction’s manager of business development for Iowa.

Tom Gayman and Mike Carver were both first elected in 2007. They are significantly older than Cox and seem less likely to seek to return to public office in the future.

Four Democrats have been actively campaigning for the three available council seats:

I am aware of one declared Republican candidate: former Urbandale school board member Adam Obrecht (campaign website). Pat Pithan, current chair of the Urbandale Chamber of Commerce, is rumored to be considering the race too. He and Obrecht both have strong networks of support in the community. GOP strategists are likely putting out feelers to other potential candidates.

Urbandale will hold a primary election on October 8 if more than six candidates submit nominating papers for the three council seats before the filing period closes on August 29. The top six vote-getters in that primary election will appear on the November 5 ballot. City clerk Nicole Lunders told Bleeding Heartland on August 19 that so far, she has received papers from Blake and Obrecht.

Democrats would have better prospects with only three candidates vying for the three open seats.

Turning to the largest Des Moines suburb, at-large city council member Jim Sandager confirmed last week that he will not seek a fifth term. “After prayerful consideration and discussion with my wife, Louisa, it is time to pass the gavel to another generation of leadership,” he said in a statement.

A few days later, John Mickelson announced he will not seek another term in West Des Moines’s Ward 2. In a statement posted on his LinkedIn profile, Mickelson cited growing family and business obligations but said, “After this next phase of my life, I would welcome another stint at elected public service if folks will have me and God opens another door.” He joined the city council following a special election in early 2013 to replace State Senator Charles Schneider and was re-elected to a four-year term in 2015.

The only declared Democratic candidate in West Des Moines, to my knowledge, is Ryan Crane, who’s seeking the at-large seat. (Facebook, Twitter) Democrats have been recruiting possible candidates in Ward 2. UPDATE: Erin Cubit posted on Facebook on August 19 that she plans to run for Ward 2. LATER UPDATE: Cubit formally launched her campaign on August 21. She has worked as a community health educator and grassroots organizer and is now director of government relations for the Iowa Hospital Association.

UPDATE: Attorney and lobbyist Matt McKinney is also running for the at-large seat, Gage Miskimen reported for the Des Moines Register on August 16. Like many lobbyists, he has contributed to politicians of both parties, but most of his financial support goes to Republicans, including West Des Moines city council members (see here and here).

West Des Moines is not a “primary” city, so the filing period for local candidates runs from August 26 to September 19. All candidates who submit nominating papers with enough valid signatures from residents will appear on the November 5 ballot.

Years of hard organizing work by local Democratic groups in Polk County–spearheaded by Jerry Tormey and Rick Smith in Urbandale–may pay dividends in this year’s city elections. Most of the time, winning an open seat is easier than defeating an incumbent, especially in city races that are usually low turnout, “friends and neighbors” affairs.

Perhaps the Republicans on the West Des Moines and Urbandale city councils would have retired this year in any case. But knowing that they would have to work hard to earn another term–and could lose, as long-serving council member Rick Messerschmidt did to Hardman two years ago–may have tipped the scales.