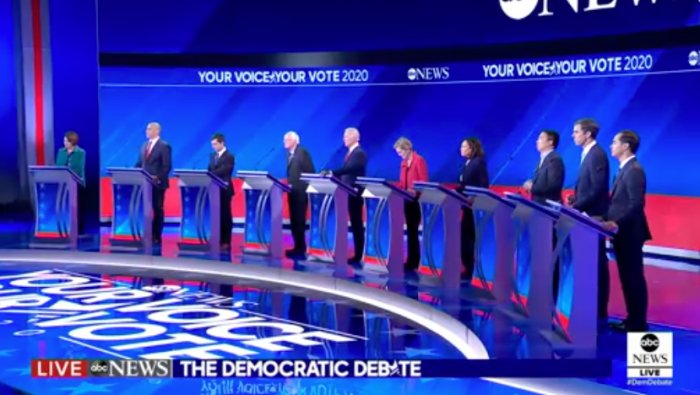 First disclaimer: I don’t agree with the Democratic National Committee’s debate criteria and encourage Iowans to keep listening to all the presidential candidates.

Second disclaimer: I doubt anything that happens more than four months before anyone votes will significantly affect the battle for the Democratic nomination. As Dan Guild has shown, history tells us more than half of Iowa Democrats who participated in the 2004 and 2008 caucuses decided in the final month.

That said, here are my thoughts on last night’s three-hour debate at Texas Southern University in Houston.

1. The September 12 debate was the best of 2019 so far, thanks to mostly good work by the moderators: Linsey Davis, David Muir, and George Stephanopoulos of ABC News, and Jorge Ramos of Univision.

Most of the questions were substantive and there were only a few silly ones (like asking Booker whether more people in Iowa and Texas should be vegan).

The ABC/Univision panel also kept better control of the clock, which meant disparity in speaking times was less extreme than in the June and July debates.

NEW: The third Democratic debate is over.

2. Journalists continued to overlook some important topics. I had hoped to see more questions about issues that didn’t come up in June or July. Instead, candidates spent a lot of time on ground already covered.

Granted, health care and gun safety are salient issues for many Democrats. But so are reproductive rights and gender pay equity, disability rights, voting rights, LGBTQ rights, and judicial appointments. David Dayen pointed out, “we’ve now gone three [debates] without anything about Wall Street, private equity, and the fundamental structure of the economy,” adding that “In 2016 this was actually a major topic in all the Democratic debates. After the swing to deregulation we’re far less safe. Yet nothing.” I was expecting someone to ask Joe Biden about the 2005 bankruptcy bill, which Elizabeth Warren opposed then and still criticizes.

3. Once again, Biden had no apparent strategy and seemed unprepared for the terrain. Speaking on the campus of a historically black university, he should have anticipated some question about systemic racism or his 1970s record on desegregation. But when the time came, he fell back into his tendency to ramble, with disastrous results.

Joe Biden's answer on how to address the legacy of slavery was appalling — and disqualifying.

It ended in a sermon implying that black parents don't know how to raise their own children.

Biden is fortunate he is so well-known (and generally well-liked) as Barack Obama’s vice president. As Bill Scher commented, his “debate performances would rank him near the bottom” if viewers knew nothing about the candidates, but “he is judged by some more by past performance than present debate performance.”

There is time for Biden to improve before the later debates, which will draw a larger audience. And it’s impossible not to be moved when he discusses his devastating bereavements, as he did in his closing statement.

What @JoeBiden does here is something @realDonaldTrump is not capable of … the sincerity, authenticity, humanity demonstrated by Biden here is Joe Biden at his best. It's why he would make an honorable President. No wonder Trump is so afraid of Biden. #DemDebate pic.twitter.com/8ZbyiYLz1m

4. I’ve been expecting Cory Booker to move up in the early state polls, because audiences consistently respond well to his stump speech. He’s now three for three in televised debates. Booker had a number of strong answers and parried the stupid question about his veganism well. I particularly liked his final remarks.

5. Pete Buttigieg can speak smoothly about any topic, and his reflection on his decision to come out, knowing that it could end his political career, was powerful.

This answer was another highlight of the evening:

We have a president who seems to treat troops as props. As a military officer the first thing that goes through your mind, the first time you make eye contact with somebody you’re responsible for in uniform is do not let them down. This president does that, I will not. #DemDebate pic.twitter.com/fSGXvLHT7d

6. In a large field, going after the front-runner is risky, and I don’t think the gamble paid off for Julian Castro. He made an entirely fair point about how Biden uses a popular former president as a shield:

But it backfired for Castro to suggest that Biden’s memory is faltering. You can hear it in the way the audience reacted around the 1:20 mark.

Julián Castro goes after Joe Biden on health care: "I'm fulfilling the legacy of Barack Obama, and you're not."

"That'll be a surprise to him," Biden responds. https://t.co/INdRXlIwFs #DemDebate pic.twitter.com/irXrw34EEs

Castro said later he “wasn’t taking a shot at his age […] It’s about the health care policy.” But the controversy over whether Castro took a cheap shot overshadowed the point he was making (Biden’s plan would leave 10 million Americans uninsured). As the saying goes, if you’re explaining, you’re losing.

7. Kamala Harris didn’t have a standout moment like the first debate, and a couple of her jokes didn’t quite land. On the plus side, she continually turned the conversation back to President Donald Trump, which was effective.

While other candidates argued about Medicare for All versus a public option, Harris reminded the audience that Trump has worked diligently to scrap the entire Affordable Care Act. Harris spoke directly to Trump in her opening statement.

This is the water cooler moment in offices across the country tomorrow. THIS is why Trump fears facing #KamalaHarris more than anybody in this race. #DudeGottaGo #DemDebate #KHive #Kamala2020 #Kamalapic.twitter.com/GBSo745zHi

As the first graduate of a historically black university to appear in a presidential debate on an HBCU campus, Harris also addressed the benefits of diversity in education:

I know how important having a teacher who looks like you is to your success. #DemDebate pic.twitter.com/26jb6q04Ds

8. Amy Klobuchar was short-changed on time and didn’t get as many opportunities to make her electability argument as in the first two debates. But she didn’t need many words to make her case for a public option. Minutes after Bernie Sanders proclaimed, “I wrote the damn bill,” Klobuchar countered, “While Bernie wrote the bill, I read the bill.” It says on page 8 that there won’t be any private health insurance under a single-payer system. “I don’t think that’s a bold idea, I think it’s a bad idea.”

Women’s issues hardly came up during the three-hour debate, but Klobuchar used her closing remarks to tell a story that will resonate with many women.

I closed the third #DemDebate with my story, and the challenges that taught me the value of public service. pic.twitter.com/5bi2y41iyU

9. Beto O’Rourke had even less speaking time than Klobuchar. Nevertheless, he delivered some of the evening’s most memorable lines. Minutes after candidates left the stage, the O’Rourke campaign was already selling t-shirts featuring the sound bite, “Hell yes, we’re going to take your AR-15.”

10. I struggle to understand Bernie Sanders’ strategy. In three debates, I have yet to hear anything that could extend his appeal beyond current supporters.

When Ramos asked Sanders a hostile question about how his version of socialism differed from “the ones being imposed in Venezuela, Cuba, and Nicaragua.” Sanders said he supports the kind of governance found in Canada and Scandinavia. Fair enough. But he insists on calling his agenda “democratic socialism.”

I believe in guaranteeing health care as a right.

I believe we should not be the only major country not to provide paid family leave.

I believe every worker deserves a living wage.

I believe in an economy that works for all of us. pic.twitter.com/n8RDaQFAwO

Why not advocate for the same popular policies (guaranteed health care, paid family leave, a living wage, and so on) without using a label guaranteed to drive away many people who otherwise share your goals?

Sanders did land a solid hit in response to a question about Iraq. Biden had admitted he should not have voted for what President George W. Bush said he was going to do. Sanders noted he never believed what Bush and Vice President Dick Cheney said about Iraq, adding that he’s the only candidate who opposed all three of Trump’s military budgets.

"I think I am the only person up here to have voted against all three of Trump's military budgets. I don't think we have to spend $750 billion a year on the military when we don't even know who our enemy is" @BernieSanders #DemDebate pic.twitter.com/YhAYjZ0DcT

11. I haven’t heard Elizabeth Warren give a bad answer in three debates, so it was hard to choose a clip for this post. I was impressed by how she explained the gun violence problem is much broader than mass shootings that grab the headlines. She then connected our failure to address that problem with “corruption, pure and simple” in Washington. Congress “is beholden to the gun industry,” and Democrats need to roll back the Senate filibuster.

“We have a Congress that is beholden to the gun industry.” —@EWarren

She’s right: 90% of Americans support universal background checks, and the NRA is the reason why Senate leadership refuses to support them. #demdebate pic.twitter.com/Ak6EU4yQiN

While Warren makes a strong case for Medicare for All, she didn’t convince me that everyone will happily give up their private insurance.

We like our doctors, our nurses, and our pharmacists. We don't like spending endless hours filling out forms and waiting on hold for insurance companies to deny us care to grow their profits. This is why @ewarren is fighting for #MedicareForAll. #DemDebate pic.twitter.com/oUn4c32Luh

Many people do like the coverage they receive through their employer. Perhaps some have a false sense of security about their current policy–especially if they haven’t had a serious medical problem. But I think swapping out private insurance for a government-run plan will be a tough sell, especially in the suburban areas that will likely decide the 2020 election.

12. Yet again, Andrew Yang got the least time to speak. But he managed to become the second most tweeted about candidate, probably because of how he answered a question about immigration policy.

.@AndrewYang: "My father grew up on a peanut farm in Asia with no floor. And now his son is running for president. That is the immigration story that we have to be able share with the American people." https://t.co/qr6gtrNAcp #DemDebate pic.twitter.com/WLuv2HuNKX

Any comments about the presidential campaign are welcome in this thread.