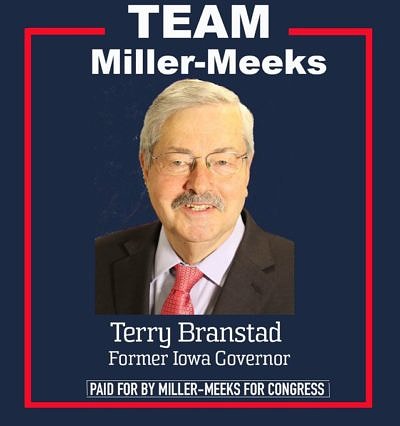 Is door closing for other Republican candidates in IA-02?

State Senator Mariannette Miller-Meeks announced on October 7 that former Governor Terry Branstad has endorsed her candidacy in Iowa's second Congressional district. A statement quoting the former governor and his son Eric Branstad is at the end of this post. Branstad named Miller-Meeks to lead the Iowa Department of Public Health when he took office in 2011, and she served in that role for a little more than three years.

Miller-Meeks, who was the Republican nominee in IA-02 three times previously, has been unofficially campaigning for months but only formally launched last week. The other declared GOP candidate is former U.S. Representative Bobby Schilling.

Although there is plenty of time for other contenders to announce--Miller-Meeks kicked off her 2014 campaign less than a month before the filing deadline--the signal from Branstad could discourage other Republicans from seeking this seat.

Branstad gave money earlier this year to former Representative David Young, who is trying to get his job back in the third district. Backing from Branstad and U.S. Senator Chuck Grassley was likely a factor in decisions by other high-profile Republicans to pass on that race.

On the other hand, Branstad's donation to State Senator Randy Feenstra failed to discourage other Republicans from running in IA-04. Representative Steve King now has four GOP challengers.

The National Republican Congressional Committee doesn't appear to have a favored candidate for the open seat in IA-02. Ashley Hinson (who is running in IA-01) and Young were both on the NRCC's first list of "on the radar" candidates, released in August. But no one from IA-02 was named there or in the second "on the radar" group, announced last month. Campaigns need to demonstrate strength on the ground, particularly in terms of fundraising, to be included in the NRCC's "Young Guns" program for Republicans running in Democratic-held districts.

Schilling's first quarterly report to the Federal Election Commission is due on October 15. Since Miller-Meeks announced on October 1, she won't need to report her campaign's fundraising or spending until 2019 year-end reports are due on January 31, 2020.

Miller-Meeks picked up an endorsement last week from State Senator Tom Greene, who represents the Burlington area. I was intrigued by this passage in Laigha Anderson's report for The Hawk Eye about the Q&A at that Burlington event.

When it came to impeachment, Miller-Meeks refused to give her opinion on the proceedings. However, she did call out Congress for ignoring other issues, such as the United States-Mexico-Canada Trade Agreement.

“Congress needs to do their job,” Miller-Meeks said.

Miller-Meeks said that if a 10-year-old can figure out how to chew gum and walk, she does not understand why Congress cannot work on what they should do, and handle impeachment proceedings at the same time.

In contrast, Schilling has called on House Democrats to "STOP messing around with this impeachment nonsense."

I have a message for @daveloebsack and @RitaHartIA. Your party needs to STOP messing around with this impeachment nonsense. Tell Nancy Pelosi to get the #USMCA on the House floor and get it up for a vote. The farmers here are depending on it! #IA02 pic.twitter.com/BCX5F6LXvs

I haven't seen any public comment from Democratic front-runner Rita Hart about the impeachment inquiry. Representative Dave Loebsack, who is not seeking re-election, got on the bandwagon later than most of his colleagues in the Democratic caucus.

Whether the NRCC will spend significant money in IA-02 remains to be seen; the party appears to have better pickup opportunities elsewhere. That said, the House Republican campaign arm has signaled that if it plays for this district, it will attempt to make immigration a major campaign issue. The NRCC has repeatedly targeted Hart and IA-01 Representative Abby Finkenauer in recent months for their votes in the state legislature against Senate File 481, described as a ban on "sanctuary cities."

The NRCC has even cited that bill to deceptively claim Hart and Finkenauer "want child sex predators in Iowa." In reality, some law enforcement groups were part of the broad coalition that opposed Senate File 481. Several police chiefs urged lawmakers to reject the bill, arguing it would make their communities less safe.

This thread is for any comments related to the IA-02 campaign. Please contact Laura Belin with confidential tips on other Republicans who may be considering this race.

DES MOINES – The Branstad family, which includes former Iowa Gov. Terry Branstad and his son, Eric, who is an advisor to President Donald Trump’s re-election campaign in Iowa, announced today their financial support of Sen. Mariannette Miller-Meeks in her race for Congress.

“Mariannette is a conservative fighter who has never quit on the people of Iowa,” said Eric Branstad. “The voters of the 2nd District deserve a conservative who knows this state and knows its people. When she gets to Washington, she’ll hold the bureaucrats accountable and make sure every Iowan has their voice heard loud and clear. My family and I are proud to support this conservative Iowan for Congress.”

In 2011, then-Gov. Branstad appointed Miller-Meeks director of the Iowa Department of Public Health. She served in his administration for three years. Working with Branstad, Miller-Meeks worked to build a model that would make Iowa one of the healthiest states in the U.S. Now, the idea has turned into the Healthiest State Initiative, a nonpartisan, nonprofit organization that engages workplaces, communities, schools, and individuals to improve Iowa’s health and happiness.

“Branstad is the longest serving governor in U.S. history. He never quit on Iowa, and neither will I,” said Miller-Meeks. “I’m grateful for his and his family’s support as I begin this run for Congress. He is a role model for public service and a pillar in Iowa conservative politics.”

Miller-Meeks announced her candidacy as a Republican running for the 2nd Congressional District last week. To learn more about her campaign, visit millermeeks2020.com .