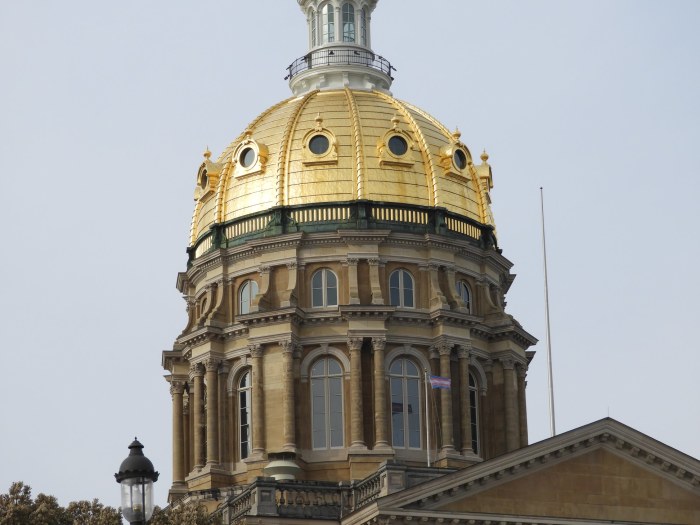 UPDATE: House Judiciary Committee Chair Steven Holt confirmed by email on January 29, "The bill is dead. I will not assign it to sub-committee."

Nine Iowa House Republicans are trying to make it legal to discriminate against transgender Iowans in many areas of daily life, including education, employment, and housing.

House File 2164 would remove gender identity protections from the Iowa Civil Rights Act. Adding sexual orientation and gender identity language to that law in 2007 was one of the hard-fought victories of the new Democratic legislative majority.

The civil rights law bans discrimination against protected classes in "public accommodations, employment, apprenticeship and on-the-job training programs, vocational schools, or housing." Iowa House and Senate Republicans set a terrible precedent last year by altering the code to deny gender-affirming surgery to transgender Medicaid recipients. (That law is being challenged in court.) So it's not surprising a group of social conservatives want to deny all civil rights to trans Iowans.

It's far from clear there are 51 votes to get this horrible proposal through the Iowa House, or that state Senate leaders would want to pass it in the upper chamber. After the jump I've highlighted how fair-minded Iowans can help keep this bill from becoming law.

As it happens, none of the nine House File 2164 co-sponsors (Dean Fisher, Anne Osmundson, Terry Baxter, Tedd Gassman, Thomas Gerhold, Phil Thompson, Tom Jeneary, Skyler Wheeler, and Sandy Salmon) serve on the House Judiciary Committee, where the bill was referred after being introduced on January 29.

Republicans hold twelve seats on that committee, Democrats nine. So if two of the committee Republicans oppose the effort, Chair Steven Holt will not have the votes to pass it and may never bring it to the full committee.

Here are those twelve Republicans. Click on any name to bring up contact information for that legislator. When calling or emailing the lawmakers, I would be specific about why this proposal is so harmful. Most fair-minded people don't think Iowa employers should be able to fire someone, or not hire them, solely for being trans. Most people don't think landlords should be able to evict people because they are transgender, or that Iowans should be denied educational opportunities or apprenticeships on the basis of their gender identity. UPDATE: I would also mention that legalizing discrimination will likely lead to boycotts that hurt Iowa's economy. The Principal Financial Group already registered against the bill.

Stopping any bad bill will be easier in the Iowa House, where the GOP has only a 53-47 majority, than in the Senate, where Republicans hold 32 of the 50 seats. Nevertheless, it can't hurt to try to get key senators on the record opposing this bill. I would focus on the following three (click on any name for contact information):

I'm seeking comment from Governor Kim Reynolds' staff on whether she would consider signing a bill to remove gender identity from the Iowa Civil Rights Act. She did sign and emphatically defend last year's discriminatory legislation, which sought to overturn an Iowa Supreme Court ruling on access to gender-affirming surgery for Medicaid recipients. I haven't heard her advocate for further erosion of civil rights, though.

As when contacting legislators, I would ask specific questions, such as: does Governor Reynolds believe Iowa employers should be able to fire or not hire someone for being trans? Should landlords be able to kick trans people out of housing? Should someone be denied educational opportunities or apprenticeships on the basis of their gender identity? Is the governor concerned about tourism or other economic boycotts that could happen if Iowa legalizes discrimination?

Several organizations that advocate for LGBTQ equality or civil rights generally--One Iowa Action, Iowa Safe Schools, Interfaith Alliance of Iowa Action Fund, ACLU of Iowa--are already mobilizing voters against this bill. Do take action, but don't panic: this bill can be stopped if enough voters reach out to the right Republican lawmakers.

Top image: One of the Iowa Safe Schools photos of the transgender flag flying above the Iowa state Capitol on November 20, 2019.