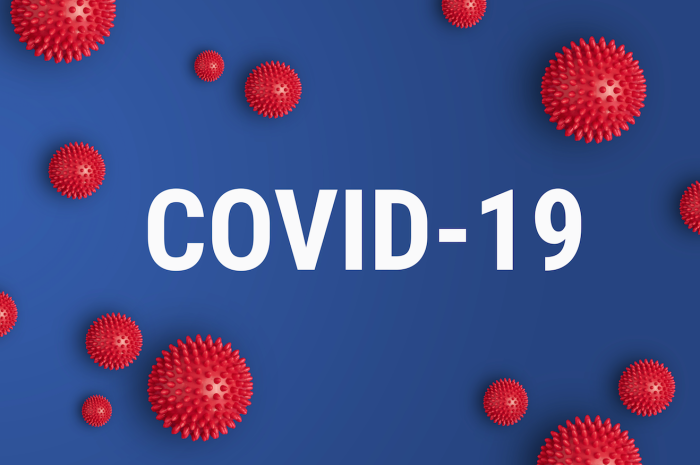 UPDATE: The Iowa legislature on March 16 suspended the 2020 session for at least 30 days. The Iowa Democratic Party sent guidance to the State Central Committee on March 23 on conducting county conventions "using an absentee system." I've enclosed that document at the end of this post.

The Iowa Democratic Party is postponing county conventions scheduled for March 21 "to a future date to be determined," the party announced today.

But for now, leaders of the Iowa legislature have no plans to pause activities at the state Capitol. They should reconsider.

"After extensive consultation with County Chairs, the State Central Committee, party leaders, and public health officials, we have come to the determination that the spreading coronavirus poses a risk that outweighs a temporary delay in moving the caucus-to-convention process forward.

“This is not an easy decision, but we believe it is the right decision. By their design, caucuses are gatherings built around a sense of community, and throughout every step, we have worked to ensure the process is safe and accessible for every Iowan. However, Iowa Democrats should not have to choose between democratic participation and remaining in good health, and concerns for the wellbeing of our delegates, thousands of volunteers, workers at convention venues, and the public come first.

Today's announcement does not affect planning for the Democratic Congressional district and state conventions, scheduled for April 25 and June 13, respectively.

We'd prefer to work with the three preference groups ([Pete] Buttigieg, [Bernie] Sanders, and [Elizabeth] Warren) on figuring out who their delegates and alternates would be. [...] We envisioned contacting all the folks not in those preference groups to see where they wanted to be. For platform, our preference was to still have a teleconference for debate and approval. For the Affirmative Action Chair election, we could elect that position at our next Central Committee meeting like we do the rest of our officers. [...]

A fair number of smaller county parties insisted on holding their county conventions next weekend. Some thought that their conventions and quorum numbers (8, 20, compared to our 580) were small enough that they may not be high risk. Others spent a lot of time and resources putting their mailings out and were worried about sowing confusion.

At this writing, Iowa has seventeen confirmed cases of novel coronavirus (COVID-19). The Iowa Department of Public Health released recommendations on March 12 stating,

There is currently no known community spread of COVID-19 in Iowa and IDPH is not making any recommendations to cancel planned events and mass gatherings at this time.

“Iowa has not identified community spread of COVID-19 at this time, and absent community spread or additional guidance from our federal partners, we aren't making any recommendations to cancel events,” said Dr. Caitlin Pedati, IDPH medical director and state epidemiologist. “This is, however, a very fluid situation and we urge the public to closely monitor messaging from the Iowa Department of Public Health for updated guidance.”

The CDC has, however, provided specific guidance for high risk groups. Older adults and those with chronic health conditions should stay away from others who are sick, limit close contact with others in general, avoid crowds, and wash hands often.

Although some may argue that canceling large gatherings is an overreaction, given the current state of affairs, others argue persuasively that the window to slow the spread of COVID-19 is small. By some accounts, the U.S. is only about ten days behind Italy, which is suffering from shortages of hospital beds and equipment to deal with severe coronavirus infections. Eliza Barclay and Dylan Scott wrote at Vox on March 10,

the speed at which the outbreak plays out matters hugely for its consequences. What epidemiologists fear most is the health care system becoming overwhelmed by a sudden explosion of illness that requires more people to be hospitalized than it can handle. In that scenario, more people will die because there won’t be enough hospital beds or ventilators to keep them alive.

Epidemiologists call this strategy of preventing a huge spike in cases “flattening the curve,” [....]

Flattening the curve means that all the social distancing measures now being deployed in places like Italy and South Korea, and on a smaller scale in places like Seattle and Santa Clara County, California, aren’t so much about preventing illness but rather slowing down the rate at which people get sick. [...]

So even if you’re young and healthy, it’s your job to follow social distancing measures to avoid spreading it to others, and keep the epidemic in slow motion. “The more young and healthy people are sick at the same time, the more old people will be sick, and the more pressure there will be on the health care system,” [infectious disease specialist and hospital epidemiologist Emily] Landon explained.

Meanwhile, Republican leaders in the Iowa House and Senate do not plan any changes to the schedule in response to coronavirus. Senate Majority Leader Jack Whitver told the Des Moines Register on March 11 that

he's confident in the leadership of Gov. Kim Reynolds, a Republican. Reynolds and public health officials held a news conference Tuesday to answer reporters' questions about the virus and discuss the state's efforts to combat it. She cautioned Iowans to stay calm and said the state is taking steps to manage the situation.

"The governor is working with the Iowa Department of Public Health to provide guidance to all facilities, including the Legislature. There currently is no need to postpone the legislative session," Pat Garrett, a spokesperson for Reynolds, said Wednesday. "She urges all Iowans to use the same precautions that limit virus spread, like washing your hands and staying home when you're sick."

no changes are planned unless the Iowa Department of Public Health advises they’re needed.

“If there needs to be a response from the Legislature we’re preparing ourselves to do that but at this point in time that’s not been the request of us,” he said.

Democratic State Senator Rob Hogg has been advocating for a pause in the legislative session. He explained,

"I can’t think of a single bigger incubator for a viral disease to spread statewide than the Iowa State Capitol," Hogg said. "Every day, we have hundreds or thousands of people in the Capitol from all over Iowa when we’re in session — and then everybody goes back home. And so if we were to have a coronavirus case at the state Capitol, that would spread all across Iowa."

Dozens of Iowa lawmakers are in the higher risk category due to their age, and an unknown number may have other underlying health conditions.

Tomas Pueyo wrote in a widely-shared post on Medium that delaying social distancing measures by even one day can vastly increase the number of infections. Excerpts: 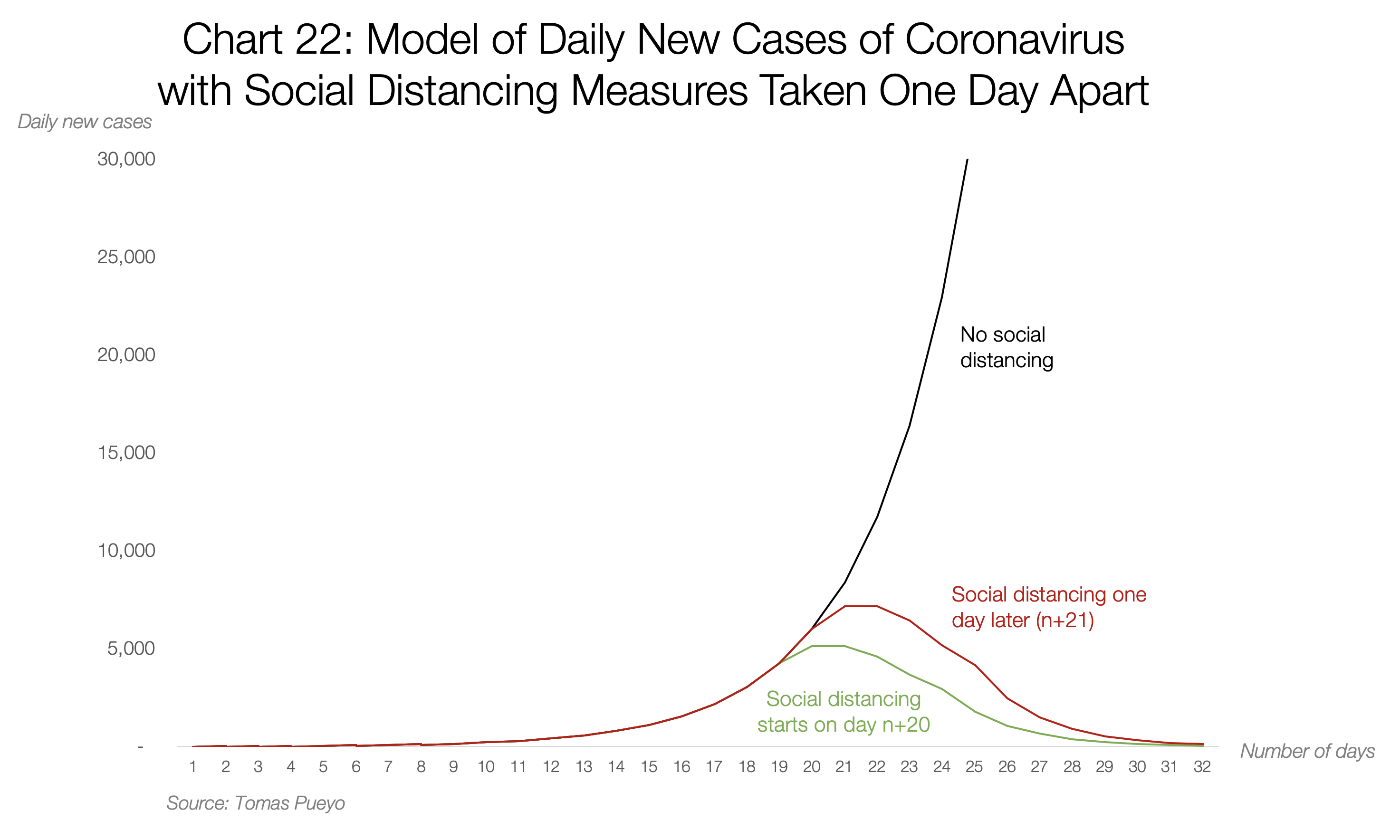 This theoretical model shows different communities: one doesn’t take social distancing measures, one takes them on Day n of an outbreak, the other one on Day n+1. All the numbers are completely fictitious (I chose them to resemble what happened in Hubei, with ~6k daily new cases at the worst). They’re just there to illustrate how important a single day can be in something that grows exponentially. [...] 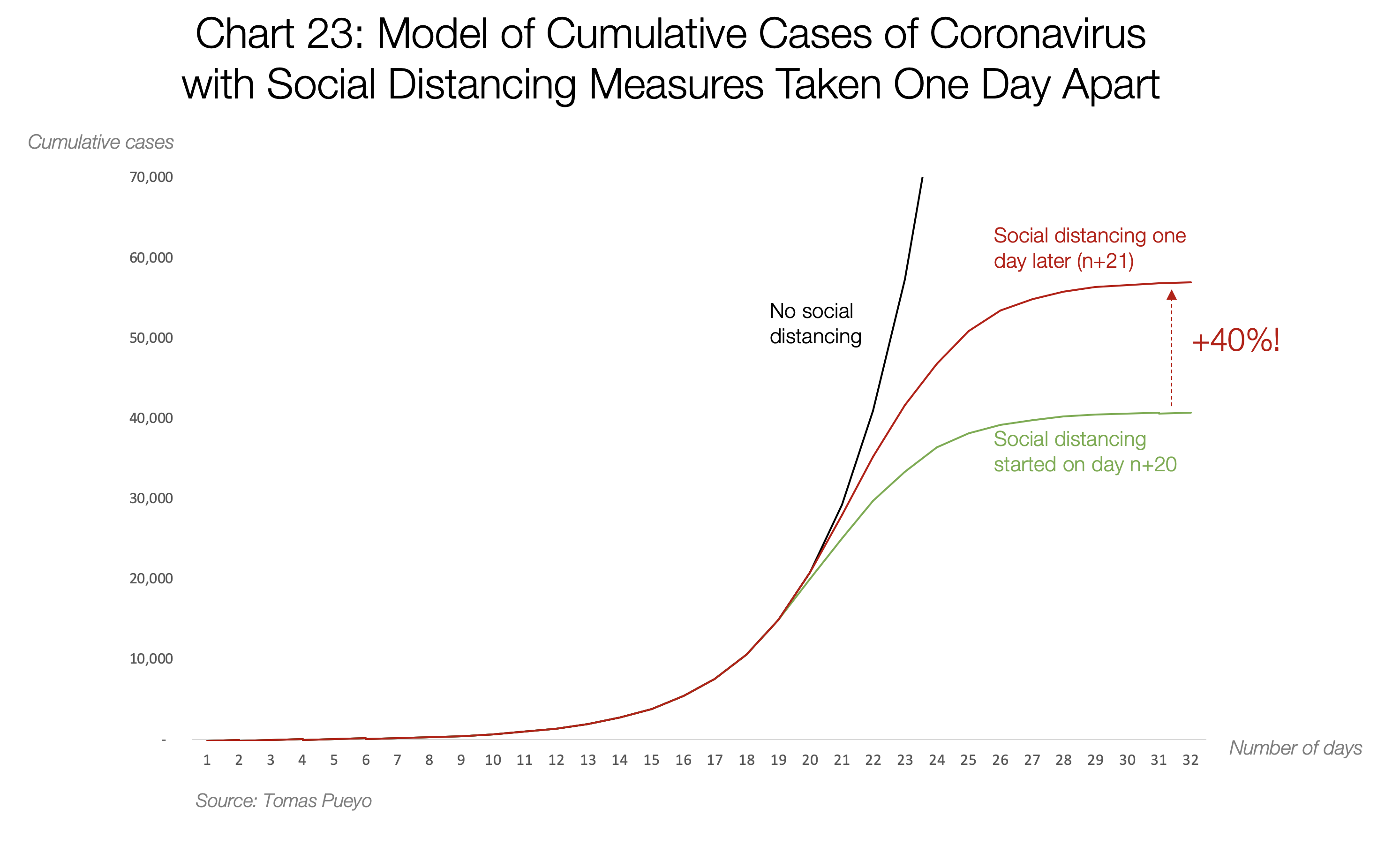 In this theoretical model that resembles loosely Hubei, waiting one more day creates 40% more cases! So, maybe, if the Hubei authorities had declared the lockdown on 1/22 instead of 1/23, they might have reduced the number of cases by a staggering 20k.

And remember, these are just cases. Mortality would be much higher, because not only would there be directly 40% more deaths. There would also be a much higher collapse of the healthcare system, leading to a mortality rate up to 10x higher as we saw before. So a one-day difference in social distancing measures can end exploding the number of deaths in your community by multiplying more cases and higher fatality rate.

This is an exponential threat. Every day counts. When you’re delaying by a single day a decision, you’re not contributing to a few cases maybe. There are probably hundreds or thousands of cases in your community already. Every day that there isn’t social distancing, these cases grow exponentially.

Although it's disappointing to see sporting events and other mass activities canceled, it would be much more disruptive if coronavirus infections exceeded the capacity of our medical facilities.

UPDATE: The Republican Party of Iowa will hold its county conventions as scheduled on March 14.

At a March 13 news conference, Governor Reynolds "didn’t discourage large gatherings altogether, as governors of some other states have done, Iowa Public Radio reported. "Reynolds says that because there’s no evidence of the disease spreading within the state, agencies are not recommending closing schools."

Iowa's largest school district in Des Moines extended spring break to give students a full two weeks off. No one will be back in the buildings until Monday, March 30.

LATER UPDATE: The governor recommended on March 15 that schools close for four weeks, and the legislature voted on March 16 to suspend legislative work for at least 30 days.

Here is the document the Iowa Democratic Party sent to State Central Committee members on March 23. 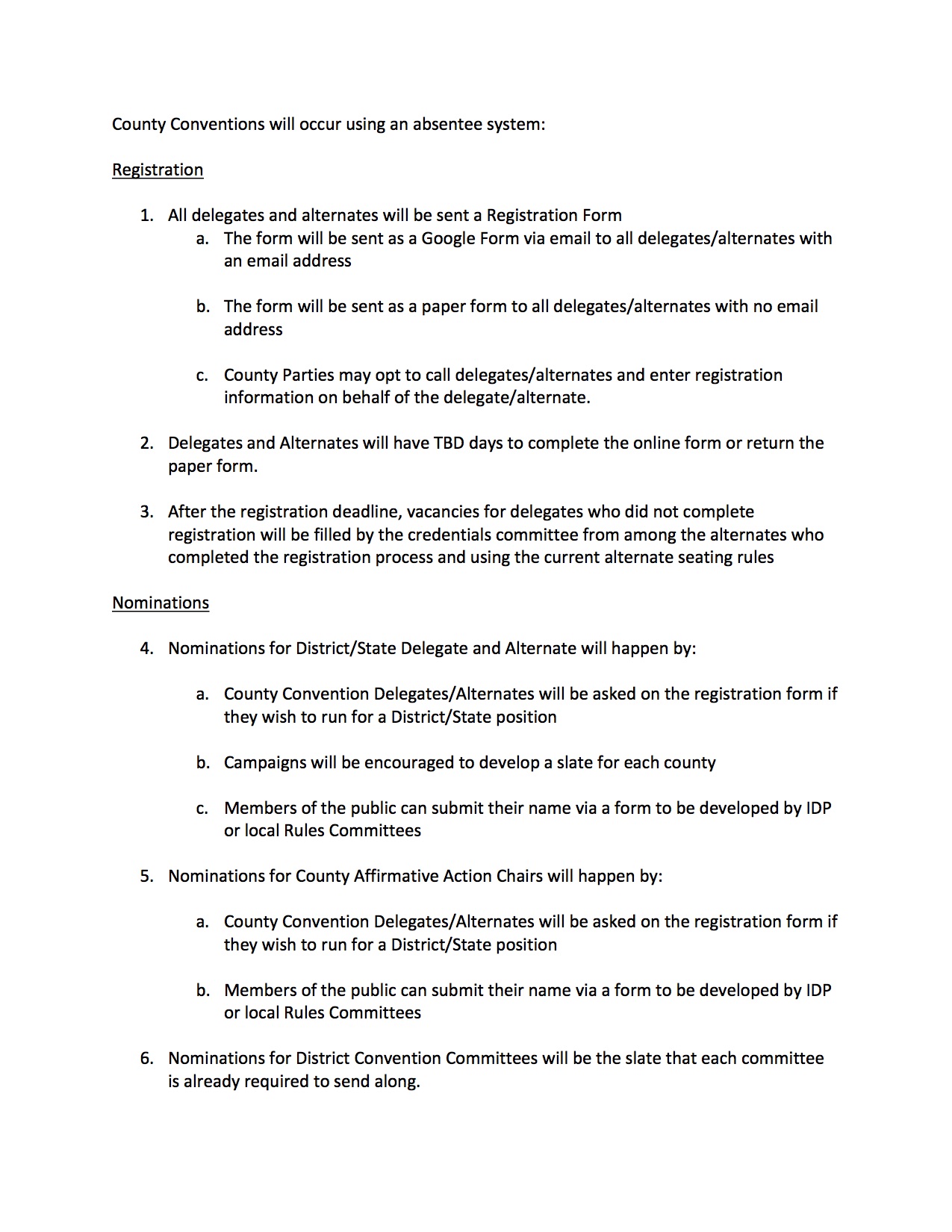 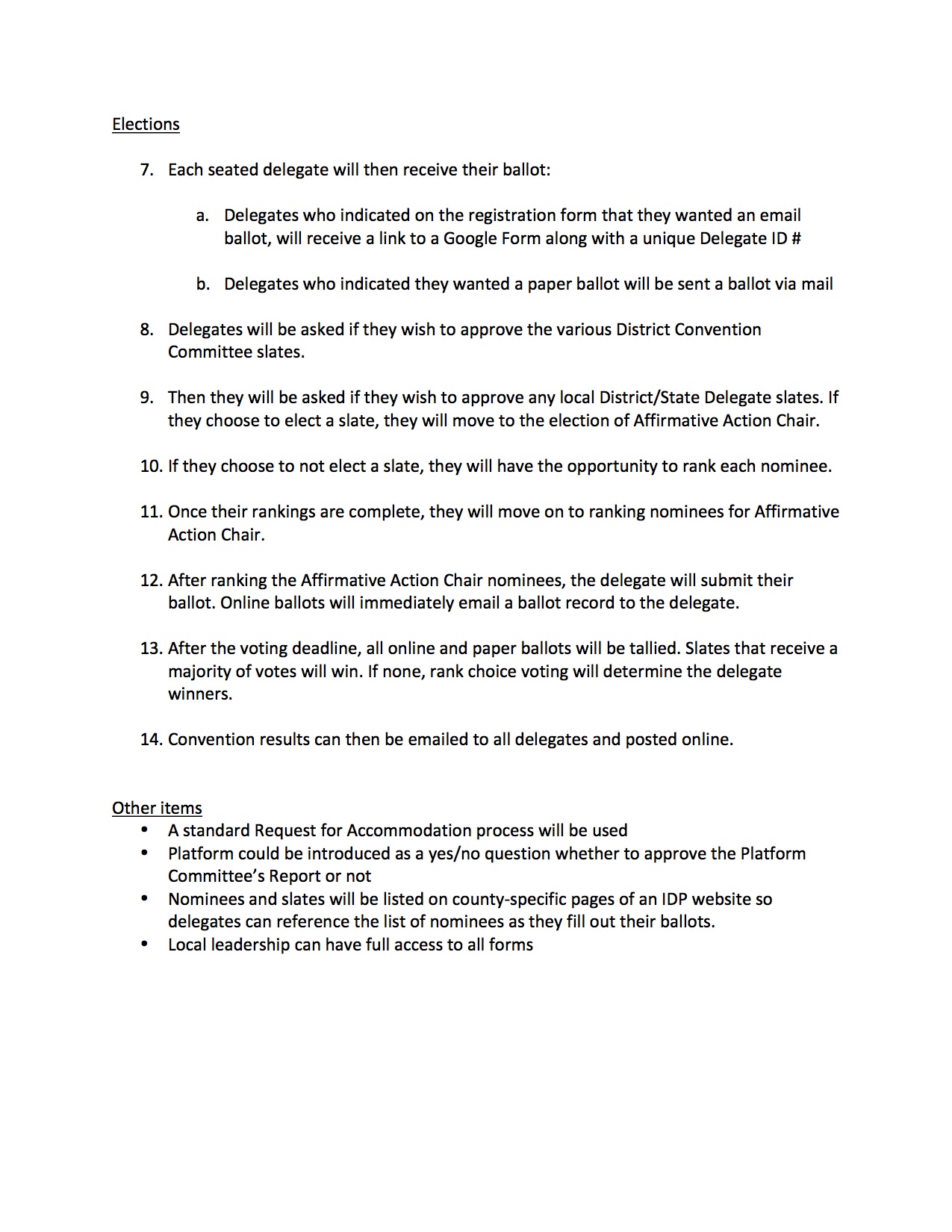