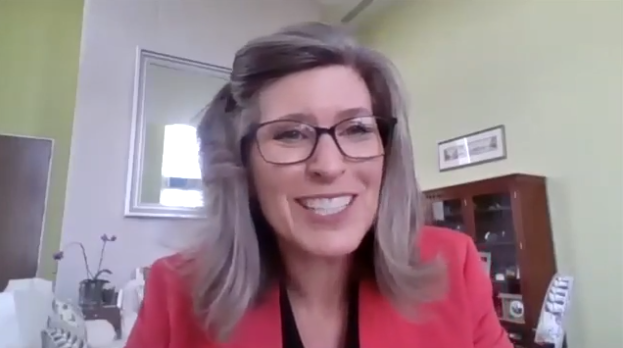 U.S. Senator Joni Ernst told members of the Iowa Farmers Union in June that she’d prefer for fossil fuel companies not to be eligible for COVID-19 relief funds.

However, months earlier she was among only two farm state senators to sign a letter aimed at ensuring that oil, gas, and coal companies would have access to federal funding from the Coronavirus Aid, Relief, and Economic Security (CARES) Act.

“I’D RATHER THEY WEREN’T”

Ernst recorded a Facebook Live session with the Iowa Farmers Union on June 30. In this clip, the union’s president Aaron Lehman asked the senator about COVID-19 relief for energy interests.

Ernst (laughs): I’d rather they weren’t. We could, you know we could see additional support for our ethanol producers, I think that is really important.

And that’s one thing that we continue to push, both through our work in the potential fourth [Congressional] package, but then also we have approached USDA about that as well. So making sure that those supports are going to those tied into agriculture, and that would be for our clean energy sector. […]

The backstory to that exchange was a letter Lehman had written on behalf of his organization in May. He was reacting to an effort Ernst had joined soon after Congress approved the CARES Act.

“FULLY AVAILABLE TO COMPANIES THROUGHOUT THE ECONOMY”

Members of Congress often write to state or federal officials. As is true for much of their work, such correspondence typically stays hidden from public view unless the politician brags about it in a press release or conference call with reporters.

Ernst frequently touts her letters asking for specific agency actions or allocation of federal funds. Most recently, a July 22 statement from her office featured her efforts to “ensure taxpayer dollars are not used to promote anarchy”–a running theme in the senator’s recent public comments.

In the weeks after President Donald Trump signed the CARES Act, Ernst’s office released numerous letters the senator had joined. Some of them sought assistance for farmers or the biofuels industry.

But you won’t find any public statement from Ernst about this April 7 letter to Treasury Secretary Steven Mnuchin and Federal Reserve Board Chair Jerome Powell.

It is essential that the scope of the relief provided by the CARES Act is both broad and flexible. […]

Industries, like the energy and transportation sectors are facing significant economic challenges as the demand for products and services have dropped with the constraints on the economy. We urge you to ensure that the financial relief offered under the CARES Act is fully available to companies throughout the economy.

Some outside groups have already advocated certain sectors of the economy be excluded from the loans made available under the CARES Act. Acquiescing to these demands would be contrary to Congressional intent and would arbitrarily harm certain American workers. Both are unacceptable.

The context here is that the Federal Reserve Bank of New York had retained the giant asset manager BlackRock to administer part of the CARES Act funding. BlackRock’s CEO made headlines in January when he announced plans for “a significant reallocation of capital” away from fossil fuels companies. Climate change advocate Bill McKibben described that news as “seismic.”

The senators’ letter noted that BlackRock was removing “certain companies” from its investment portfolios “as an individual business decision.” They asked the Federal Reserve to instruct BlackRock not to apply such criteria when allocating CARES Act funds, “to avoid conflicts of interest” and distribute relief to employers affected by COVID-19 “equitably.”

Although the senators did not explicitly request financial assistance for fossil fuels companies, their purpose was clear. The seventeen Republicans who signed mostly represent oil, gas, or coal producing states. They include both senators from Texas, Oklahoma, and North Dakota, and one each who represent Montana, West Virginia, Louisiana, South Dakota, and Alaska.

Most farm state senators, including Iowa’s Chuck Grassley, did not join the letter to Mnuchin and Powell. Ernst and Indiana’s Mike Braun were the only Midwesterners to sign it.

“WHY DID YOU JOIN THIS EFFORT?”

Although I follow Ernst’s work closely, this matter wasn’t on my radar until mid-May, when a reader flagged Lehman’s letter to Ernst on behalf of the Iowa Farmers Union. Excerpts:

It has come to our attention that you were a co-signer, on April 7, of a letter to Treasury Secretary Mnuchin and Federal Reserve Chair Powell asking them that BlackRock, Inc., a large asset manager which has been retained by the Federal Reserve Bank of New York to administer part of the terms of the CARES Act, assure that commercial fossil fuel entities not be excluded from these funds. Why did you join this effort? […]

The Iowa Farmers Union is deeply disappointed in your decision to seek assistance for the fossil fuel industry at a time when Iowa family farmers are suffering from the devastating economic impacts of the pandemic. Instead, our farmers and our ethanol industry deserve your support first and foremost.

During a July 3 telephone interview, Lehman told me neither Ernst nor anyone on her staff had responded to that letter. He confirmed via email today that he still has received no reply. Ernst’s staff have communicated with the Iowa Farmers Union on other issues during this period.

In Lehman’s view, “It’s very clear that there’s a consensus in Iowa for the need to help farmers and clean energy workers” affected by the COVID-19 crisis. “By stepping in on behalf of fossil fuel companies, it hurts us in our efforts to get more relief from pandemic relief funds,” he told me.

Staff for Ernst did not acknowledge Bleeding Heartland’s repeated messages seeking clarification. Was she misinformed or misled by Senate colleagues about the goal of the April 7 letter? (Seems unlikely, since her staff were wise enough not to publicize it.) Did Ernst rethink the issue sometime between then and late June, when she said she wished fossil fuels companies were not eligible for CARES Act funds?

The Iowa Farmers Union launched a radio commercial on July 9 calling out Ernst for seeking what it called “a taxpayer bailout for out-of-state oil and coal companies.” The spot asked listeners to “Tell Senator Ernst to put Iowa farmers and clean energy workers before Texas oil companies.”

In a news release about the radio ad, Lehman alluded to the June 30 webinar and the mismatch between Ernst’s words and actions.

“Our farmers were glad to hear Senator Ernst agree with us that polluting industries should not be eligible for federal relief funds,” said Iowa Farmers Union President Aaron Lehman. “Sadly, this doesn’t fit with her earlier support of the fossil fuel industry. In addition to damaging our environment and our climate, these companies are doing everything they can to destroy our ethanol industry.” […]

“Iowa’s farmers and workers need Senator Ernst to aggressively advocate for relief for agriculture and clean energy efforts here in Iowa.” added Lehman. “Support for out-of-state corporate titans that are responsible for decades of pollution is sorely out-of-touch with Iowa.”

Almost every Republican senator voted to confirm Wheeler. But most of them–especially those from states where agriculture is a crucial part of the economy–had the good sense not to ask the Treasury and Federal Reserve to give fossil fuels companies access to CARES Act funds.
_____________
Appendix: Never-answered letter from Iowa Farmers Union president Aaron Lehman to Senator Joni Ernst.

On behalf of the family farm members of the Iowa Farmers Union, I write to express our concern regarding some of your efforts in response to the economic impact of our current pandemic.

It has come to our attention that you were a co-signer, on April 7, of a letter to Treasury Secretary Mnuchin and Federal Reserve Chair Powell asking them that BlackRock, Inc., a large asset manager which has been retained by the Federal Reserve Bank of New York to administer part of the terms of the CARES Act, assure that commercial fossil fuel entities not be excluded from these funds. Why did you join this effort?

This past January, the chief executive officer of BlackRock stated in his annual letter that his firm, the world’s largest money manager, would overhaul its investing strategy to make sustainability the “new standard” for investing. He said that “a fundamental reshaping of finance” is coming about because climate change is becoming “a defining factor” and that climate change poses a risk to long-term viability. BlackRock had already made known that it is moving away from investments in the coal industry.

In an apparent response to this announcement from BlackRock and to a March 27 letter to Federal Reserve Board Chair Jerome Powell from thirty environmental protection organizations questioning the retaining of such a large investment entity as BlackRock to manage a significant portion of the CARES Act, you joined sixteen colleagues to urge both the Department of the Treasury and the Federal Reserve Board to assure that BlackRock must act “to avoid conflicts of interest”. To whose interests do you refer?

The Iowa Farmers Union is deeply disappointed in your decision to seek assistance for the fossil fuel industry at a time when Iowa family farmers are suffering from the devastating economic impacts of the pandemic. Instead, our farmers and our ethanol industry deserve your support first and foremost.

We urge you to focus your support on family farming, sustainable energy, and other enterprises that contribute to a livable future and long-term viability for Iowa.