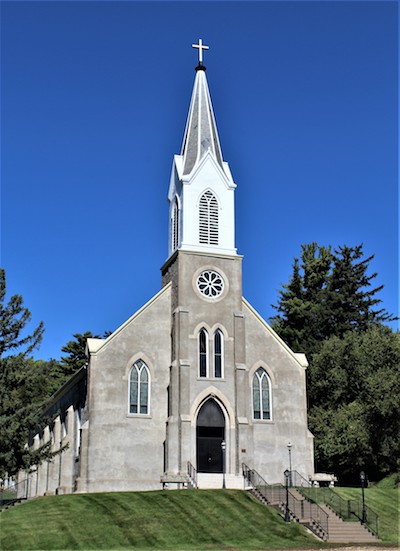 Third in a series interpreting the results of Iowa’s 2020 state and federal elections.

White non-Hispanic Catholics supported Donald Trump over Hillary Clinton by a wide margin in 2016, according to the Pew Research Center's analysis of exit polls and subsequent survey of validated voters.

Preliminary exit poll data suggests that Joe Biden improved his standing with those voters, losing white Catholics by 57 percent to 42 percent, compared to Clinton's 64 percent to 31 percent deficit. That's consistent with some polls taken during the campaign, which showed Biden gaining support among white Catholics--not surprising, since the Democratic nominee frequently referred to his Catholic faith and upbringing in public appearances.

I expected Biden to improve substantially on Clinton's performance in Iowa's most heavily Catholic counties, where "Kennedy Democrats" were once a solid voting bloc. But that didn't happen.

On the contrary, Trump increased his raw vote totals and share of the vote in those counties, as he did in many parts of the state.

The Association of Religion Data Archives maintains county reports of U.S. congregational membership. Using that resource, I identified the six Iowa counties where Catholics are by far the largest group of "congregational adherents," defined as "full members, their children, and others who regularly attend services." In five of those counties, most identified church-goers were Catholics; in Howard County, Catholics comprised nearly a majority.

Although the information dates to 2010, it's unlikely that the dominant religion has changed in any of these areas. Families usually maintain the same religious identity for generations. In many counties, the largest religious group reflects the European country of origin for immigrants who settled in that part of Iowa during the 19th century.

Most Iowa politics watchers were shocked when Trump became the first Republican presidential candidate to carry Dubuque County since 1956. No one factor explained how he outpolled Clinton by 23,460 votes to 22,850 (46.7 percent to 45.5 percent).

Note: Dubuque County is slightly more diverse than the other counties discussed in this post. Even so, U.S. Census Bureau data from 2019 indicates 90.2 percent of county residents are white and not Latino.

Like Dubuque, Carroll was once so reliably Democratic that it was among the six counties John F. Kennedy carried in the 1960 presidential election.

But unlike Dubuque, voters in Carroll began trending toward Republicans decades ago. The last Democrat to represent this area in the Iowa House retired in 2000. CORRECTION: Democrat Dan Muhlbauer was elected to the state House in 2010 (after facing an unusually weak Republican candidate) and served two terms before losing his 2014 re-election bid.

So it wasn't surprising that Trump doubled Clinton's votes in 2016: 6,638 to 3,309 (62.1 percent to 31.0 percent). That result aligned with the Pew Research Center's estimate for white Catholic preferences nationally.

I didn't anticipate that Biden would flip this county, but I did expect to see some movement toward a Democratic nominee who is a practicing Catholic. Wrong.

Approximately 94.3 percent of Carroll County residents are white and not Latino.

This traditionally Republican county's experience matches Carroll's. Trump carried Delaware by 5,694 votes to 2,957 for Clinton (61.0 percent to 31.7 percent). Unofficial results show the president gained nearly a thousand more supporters in the county for a total of 6,666 votes (66.6 percent)--that's not a typo. Biden won 3,157 votes--just 200 more than Clinton--and didn't improve on her vote share (31.6 percent), due to the higher 2020 turnout.

An estimated 96.3 percent of Delaware residents are white and not Latino.

Third-party voting declined this year, and the president picked up almost all the slack, winning Jackson by 6,940 votes to 4,029 for Biden (62.3 percent to 36.2 percent).

Related: Jackson County is the population center of Iowa House district 58, which Republican Steve Bradley flipped last week by a little more than 1,200 votes. But it would be more accurate to say that Democrats lost this House seat in 2010, when party-switcher Brian Moore scored an upset win over State Representative Tom Schueller. Moore represented the district for three terms and was succeeded by another Republican, Andy McKean, in 2016. McKean joined the Democratic caucus in 2019 and was seeking re-election as a Democrat for the first time.

The Census Bureau has estimated that 95.2 percent of Jackson County residents are white and not Latino.

This county has long supported Republicans for president. Even so, Trump's 5,653 to 2,543 margin (64.7 percent to 29.1 percent) was substantially larger than Mitt Romney's advantage over Obama in 2012. Was Clinton especially disliked here?

Kossuth's population is 93.9 percent white and not Latino.

About 96.1 percent of Howard County residents are white and not Latino.

For Democrats to compete statewide in Iowa, they need to run up the score in large counties like Dubuque and keep Republican margins down in smaller counties. With national polling suggesting white Catholics had moved noticeably toward Biden, I anticipated that the Democratic nominee had potential to regain some ground in Iowa's most Catholic areas.

Instead, Biden did just as poorly as Clinton or worse.

I don't have a good hypothesis on why white Catholics would gravitate a bit toward Biden in Rust Belt states but not in Iowa. If you have a plausible explanation, please let me know.

The bottom line for me: if this Democrat couldn't move the needle in the most Catholic counties, I'm even more convinced that Iowa currently looks more like a red state than a swing state.