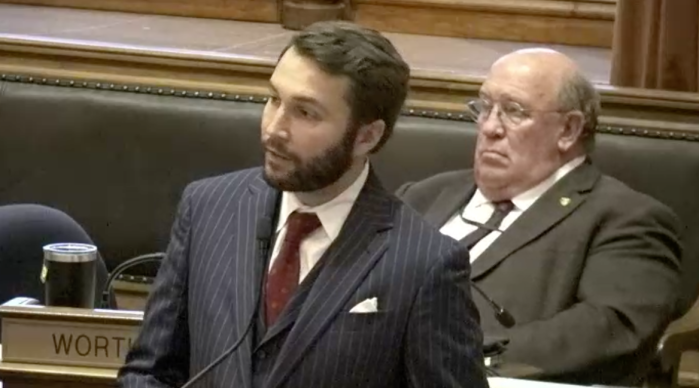 The Iowa House has again moved toward amending the state constitution to remove a lifetime ban on voting for most Iowans with felony convictions. In a gesture toward Iowa Senate Republicans, a separate bill the House approved would require payment of restitution to victims before someone's voting rights could be restored.

House GOP leaders scheduled nearly a dozen bills for debate on March 24. They brought the non-controversial bills to the floor before embarking on a marathon debate (stretching past midnight) on a bill to allow non-public charter schools.

STARTING FROM SCRATCH ON A VOTING RIGHTS AMENDMENT

If you blinked, you could have missed the two-minute early evening debate over House Joint Resolution 11. It would amend Article II, Section 5 of the Iowa Constitution, which currently reads,

A person adjudged mentally incompetent to vote or a person convicted of any infamous crime shall not be entitled to the privilege of an elector.

Under the proposed amendment, that section of the state's founding document would read,

A person adjudged mentally incompetent to vote or a person convicted of any felony who has not discharged his or her sentence shall not be entitled to the privilege of an elector.

Two years ago, the voting rights amendment stalled in the Iowa Senate Judiciary Committee. During the 2020 legislative session, it was voted out of that committee but never brought to the Senate floor.

Constitutional amendments must be approved by both the Iowa House and Senate in two separately elected legislatures before going on a statewide ballot. Since the previous Senate didn't pass the amendment, the process starts over. Lawmakers would need to approve identical versions of the amendment in 2021 or 2022, and again in 2023 or 2024, in order to get the proposal on the 2024 general election ballot. The language would be added to the constitution only if a majority of Iowa voters approve.

DEFINING "DISCHARGE" OF A FELONY SENTENCE

The governor's order applies to most Iowans who have completed all terms of prison, probation, or parole. But many Republican lawmakers support additional restrictions on who would be considered to have "discharged" a felony sentence.

A companion bill, House File 818, sets the terms and was brought up for debate immediately after HJR 11 passed. Under the bill, people who have committed certain sex crimes, child endangerment resulting in a child's death, or first degree election misconduct, would not have their voting rights automatically restored upon completing their time served in prison, or on parole or probation. Those convicted of homicide would need an individual pardon or voting rights restoration from the governor.

The most controversial part of House File 818 would require "payment of all pecuniary damages owed to a natural person" (restitution to crime victims) as a condition of retaining the right to vote. The state House and Senate approved a similar bill last year.

"WE SHOULDN'T HAVE A POLL TAX IN IOWA"

Then and now, Democratic lawmakers objected to tying financial obligations to voting. Speaking against House File 818, State Representative Mary Wolfe said she's supportive of victims receiving restitution payments. However, preventing people with felony convictions from voting does nothing to accomplish that goal.

State Representative Bruce Hunter was up next and spoke more sharply about the bill.

"We shouldn't have a poll tax in Iowa," Hunter argued. "We shouldn't have a pay to vote system. It is morally wrong, and I believe it is unconstitutional to prevent felons from voting simply because they can't afford to pay back court fees, fines, and restitution to victims."

"We all are on the side of the victim," Hunter said, "but House File 818 does absolutely nothing to protect a victim's rights." He cited research indicating that people whose voting rights were restored after a prison sentence were less likely to reoffend. That's why public safety experts have advocated bringing formerly incarcerated people into the political process. "A pay to vote system discriminates against those who can not afford to pay," Hunter said. He asserted that such laws violate the 24th Amendment to the U.S. Constitution, banning poll taxes.

Hunter also pointed out that felon disenfranchisement policies have a racially disparate impact, since people of color and especially Black Iowans are incarcerated at much higher rates than white people. Predicating a person's voice in government on their income is "wrong," he concluded.

"THIS IS NO POLL TAX"

Kaufmann began by citing court decisions from around the country that upheld statutes requiring payment of restitution. He said courts have drawn a distinction between being forced to pay restitution to a governmental body as opposed to an individual. (House File 818 specifies restitution to "natural persons.")

Kaufmann also noted that Reynolds has required voting rights restoration applicants to show they are making payments toward restitution. "I haven't seen any outrage on that," he said. (Bleeding Heartland has long argued that the restoration process established by Reynolds' predecessor, Governor Terry Branstad, is "akin to a poll tax, disproportionately affecting people of color." Two Iowans may commit the same offense, but the one with spare cash will be able to vote again, while the one with low income may never cast another ballot.)

"This is no poll tax," Kaufmann said with a tone of righteous indignation that has become his trademark. "You don't have a right to be made whole with your rights until the individual you have harmed is made whole financially." Someone who has been murdered will never be able to vote again, he pointed out.

Despite a mountain of evidence that felon disenfranchisement policies entrench racial disparities and limit political participation by African Americans, Kaufmann dismissed the idea. Victims of crimes "are all people, not certain religious sectors, not certain creeds, and not certain races," he said.

Both the constitutional amendment and the companion bill on discharge of sentence have been referred to the Senate Judiciary Committee, which will likely consider the proposals next week.