The angels standing behind survivors of crime

Luana Nelson-Brown is the founder and executive director of the Iowa Coalition for Collective Change. -promoted by Laura Belin

A network of people across the state of Iowa are dedicated to supporting and assisting survivors of violent crime. The job of these violent crime victim advocates, while fulfilling, isn’t easy.

Most of us may not know what it’s like to experience crime, but we understand that these unexpected events can carry a high cost, mentally, physically, emotionally, and financially.

Violent crime has always existed, and the COVID-19 pandemic contributed to an increase in violent crime across the nation, with Iowa being no exception. Victim advocates are working harder than ever to ensure that the harm caused to survivors is as minimal as possible.

WHAT VICTIM ADVOCATES DO

Iowa’s homicide advocates have a particularly difficult yet rewarding job. When someone experiences the murder of a loved one, lots of things happen quickly, and most of us aren’t familiar with the entities that have now invaded our lives at our most vulnerable time.

Victim advocates help ease the burden. The myriad ways they assist survivors include:

Most Iowans don’t know about these angels. But those who need them all agree that they are invaluable.

Now that you understand this network exists, imagine what it would be like without them.

Without this support system, a family struck by a homicide can experience extended trauma, fear, homelessness, loss of stable employment, or fewer days in school for children. Most people have no experience navigating the legal and court system, the funeral and burial industry, the media and the community all at once while grieving the loss of a loved one.

No one should have to face this Herculean task alone. But that is exactly what Iowa is facing this year, as federal budget shortfalls have resulted in a massive 35 percent funding cut for victim services.

The cut means at least $6 million less for victim services in our state. It means that at least 28,000 fewer crime victims will receive services over the next two years. Victims of all kinds of crimes would be affected.

HOW DID WE GET HERE?

VOCA money does not come from taxpayers. Rather, it comes from fines and penalties from federal white-collar crimes. For example, when tobacco companies were found to be negligent to the public, they were ordered to pay millions of dollars in restitution. Some of those funds went toward VOCA, which provided states with money to serve victims.

When no prosecution of federal crimes happens, no money goes into the VOCA fund. That is what happened over the last four years.  While white collar crime did indeed happen and was sometimes charged, many alleged offenders were offered deferred judgements instead of prosecution and conviction. In effect, if they paid a certain amount of money within a certain amount of time, their cases would be dismissed.

When the federal government collects money through deferred judgment, the funds do not flow to the VOCA fund. That money is directed into a general fund, meaning it is diverted away from victims.

The VOCA fund is currently at an all-time low, due to prosecutorial decisions happening between 2016 and 2019. The result will be fewer crime victims being served in Iowa.

What about state funding?  Unfortunately, the Iowa legislature has always allocated too little to victim services. Currently our state invests only $5 million in those programs. The Republican-controlled House and Senate significantly reduced the funding level in 2017.

Compounding the problem, that $5 million is designated for services to survivors of domestic violence and sexual assault. Families experiencing the homicide of a loved one have no state funding for advocacy services. Those families will be hit hardest when the few programs that do exist grapple with losing staff, resources, and possibly face closure. The Black community in Iowa will be disproportionately affected, because while Iowa’s population is approximately 4 percent Black, 31 percent of our state’s homicide victims are Black.

WHAT CAN BE DONE?

Our state can invest in victim advocacy services, but it has to be done now. This legislative session, multiple advocacy groups have asked for an increase of $2.5 million dollars to offset the federal funding cut and to invest in our communities. Appropriations committee leaders have denied their request.

Democratic State Representative Marti Anderson, a longtime supporter of services to survivors of crime, offered an amendment to the justice systems budget (House File 861) which includes $7.5 million dollars for crime victims, including families impacted by murder. Iowa House Republicans rejected the amendment along party lines on May 17.

Another thing Iowa can do is utilize American Rescue Plan funds for services to victims of crime. While Governor Kim Reynolds has not yet laid out a plan for American Rescue Plan Act funds, her commitment to criminal justice reform should encompass empowering and uplifting the voices of and providing services to victims of crime. After all, those victims are the true clients of the criminal justice system. Any reform plan without their voices and ensuring they receive resources is a plan that is destined to miss the mark and fail.

The leaders of victim services in Iowa have reached out and asked that the plan for these funds include resources to crime victims, since COVID-19 has introduced a crisis within the crisis of family and community violence. Crime has increased at the same time that more victims have comprehensive needs for food, housing, and employment. In addition, enhanced trauma from being isolated in their homes has exposed some people to more violence. Programs serving crime victims have seen their operating costs rise while they have fewer opportunities for fundraising and a dwindling network of volunteers.

Not only has violence increased nationwide this past year, here in Iowa we’ve all been traumatized by high profile crimes such as Michael Williams, whose body was found burning in Grinnell, and Breasia Terrell, who was missing for months before her body was found in DeWitt.

Iowans need to know that if they face a similar tragedy, advocacy services will be available to them, and they will not be alone as they navigate the complexities of crime victimization. To neglect the plight of these Iowans is negligent at best and downright harmful at worst. Call state senators today and ask them to support more victim services funding in House File 861, the justice systems budget. Update from Laura Belin: the Senate did not add more funding to this budget bill before sending it to the governor.

Then call or write Governor Reynolds and ask her to use part of our state’s share of American Rescue Plan funds to support victim services programs around Iowa.

Luana Nelson-Brown is the Executive Director of the Iowa Coalition for Collective Change, an organization that provides training and technical assistance to culturally specific anti-violence organizations, homicide response programs, and organizations and corporations wishing to adopt and implement anti-racist policies and procedures. Luana has more than 25 years of experience in victim advocacy, activism, and systems change and has led violence prevention and intervention efforts on a local and national level. She founded ICCC in 2018 to work at the intersection of anti-racism and violence, understanding that oppression is violence. 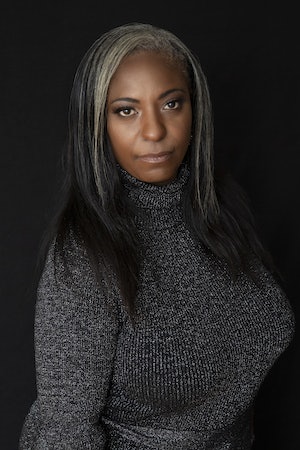