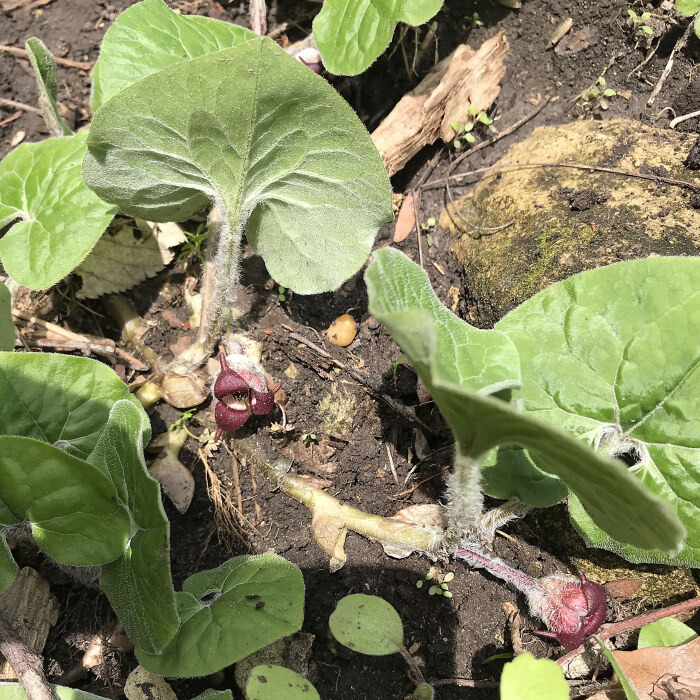 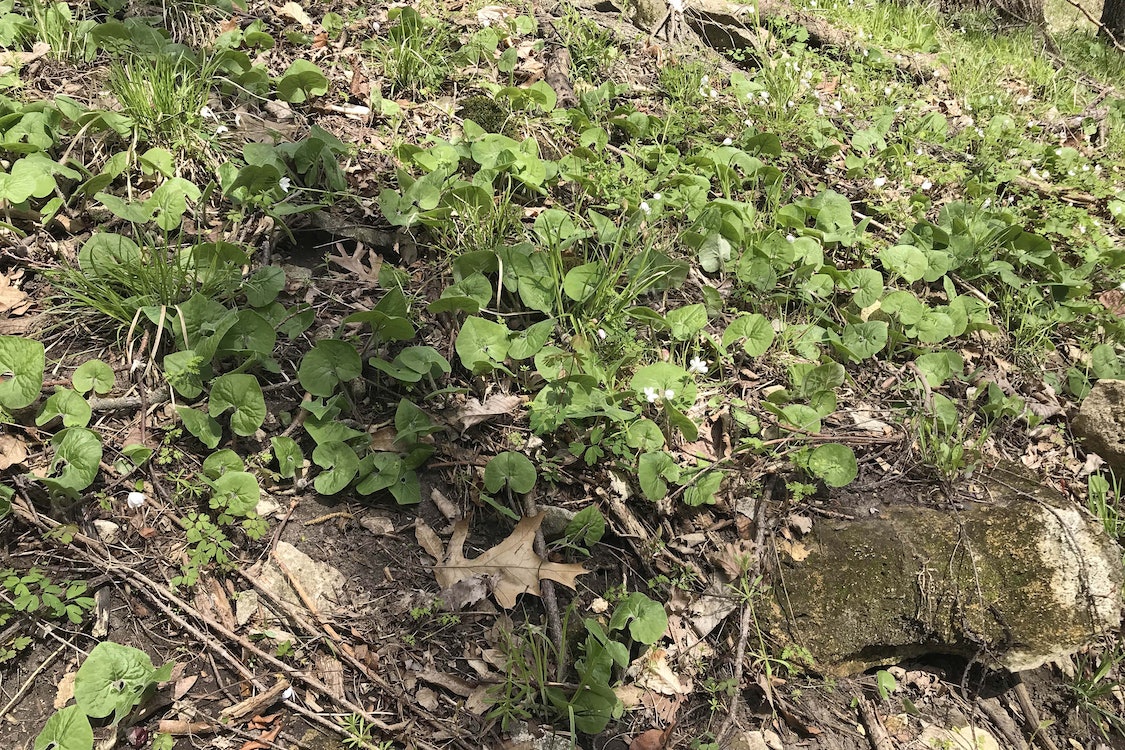 They mingle well with ferns on damp hillsides. It is very cold tolerant. 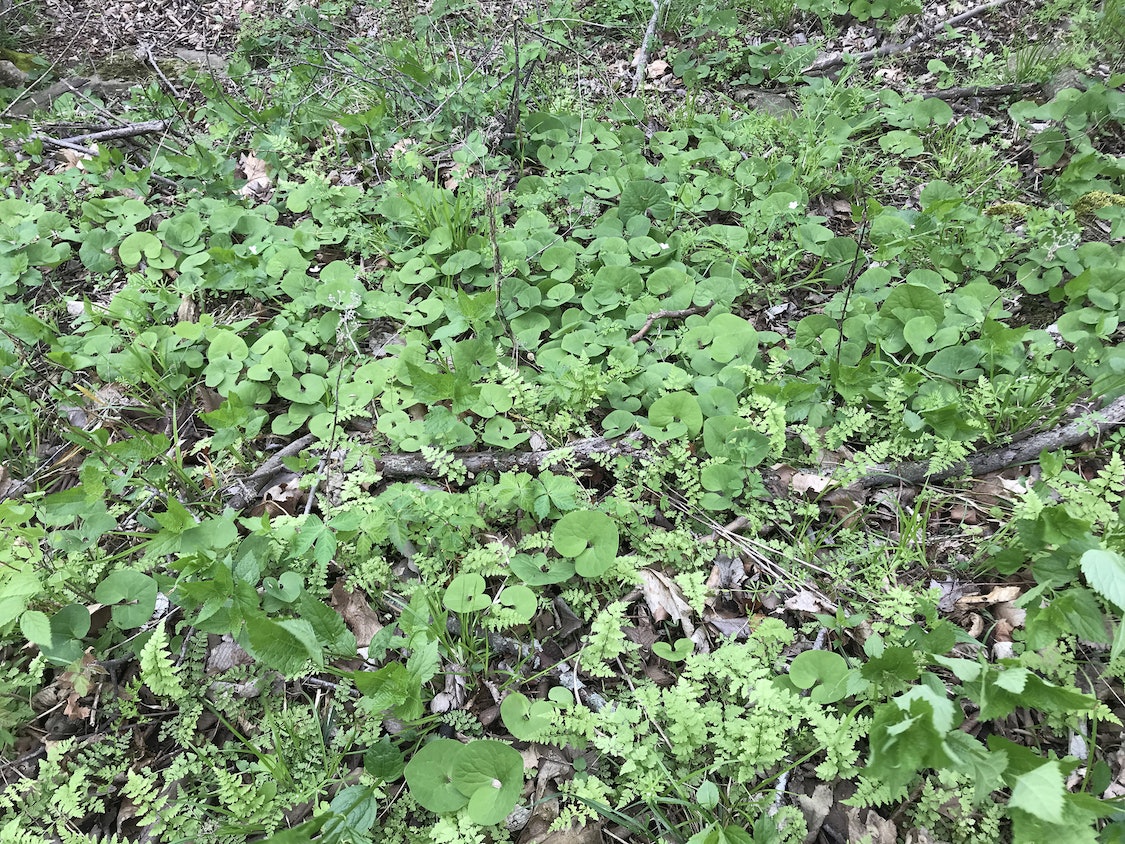 The leaves are either kidney-shaped or heart-shaped. They are fleshy with a soft, velvety texture, a very hairy stem. The leaves have an intricate vein pattern that is most unusual. 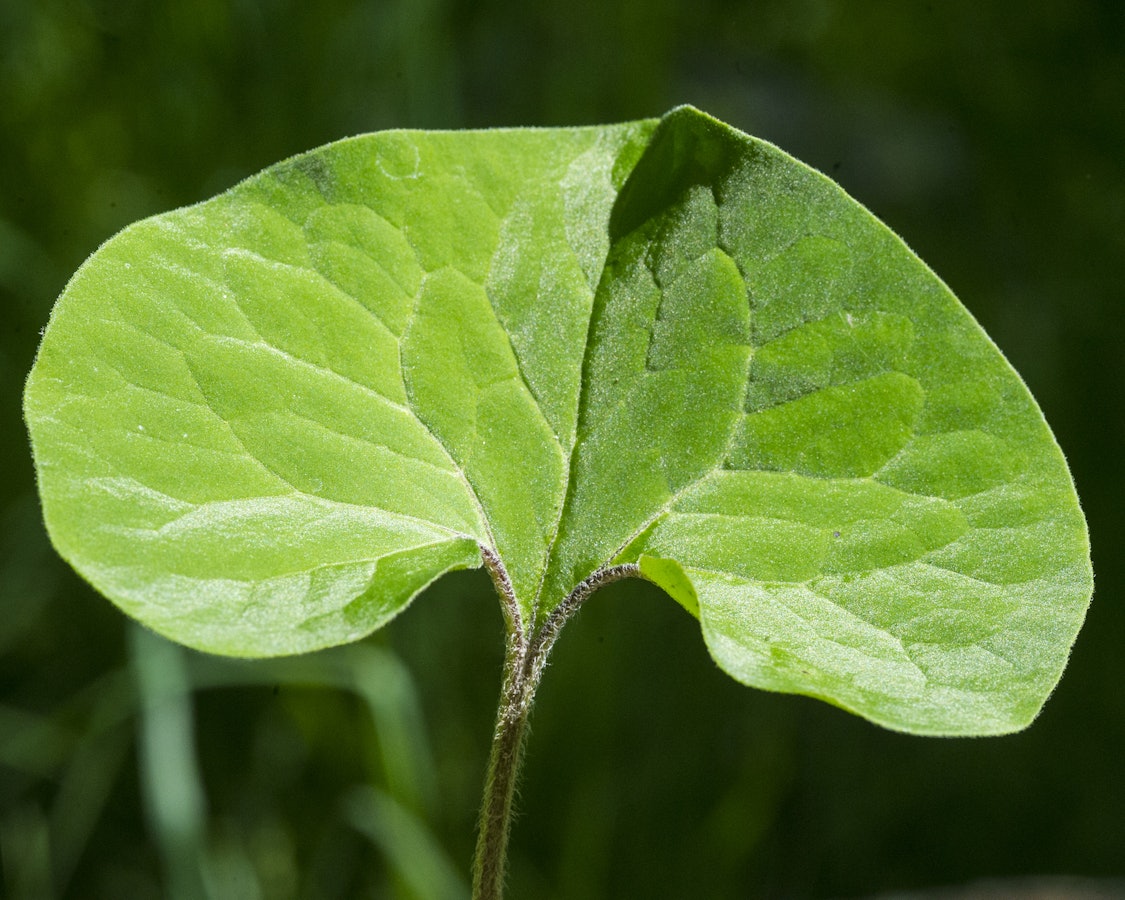 The plant begins each spring in April as pale green, crinkled soft growths, almost wadded up. But it opens into a pair of lovely leaves that can be from 2 to about 6 inches across and from just above the ground to a soaring 8 inches in height. It looks like a lovely soft ground cover with nary a blossom in sight. 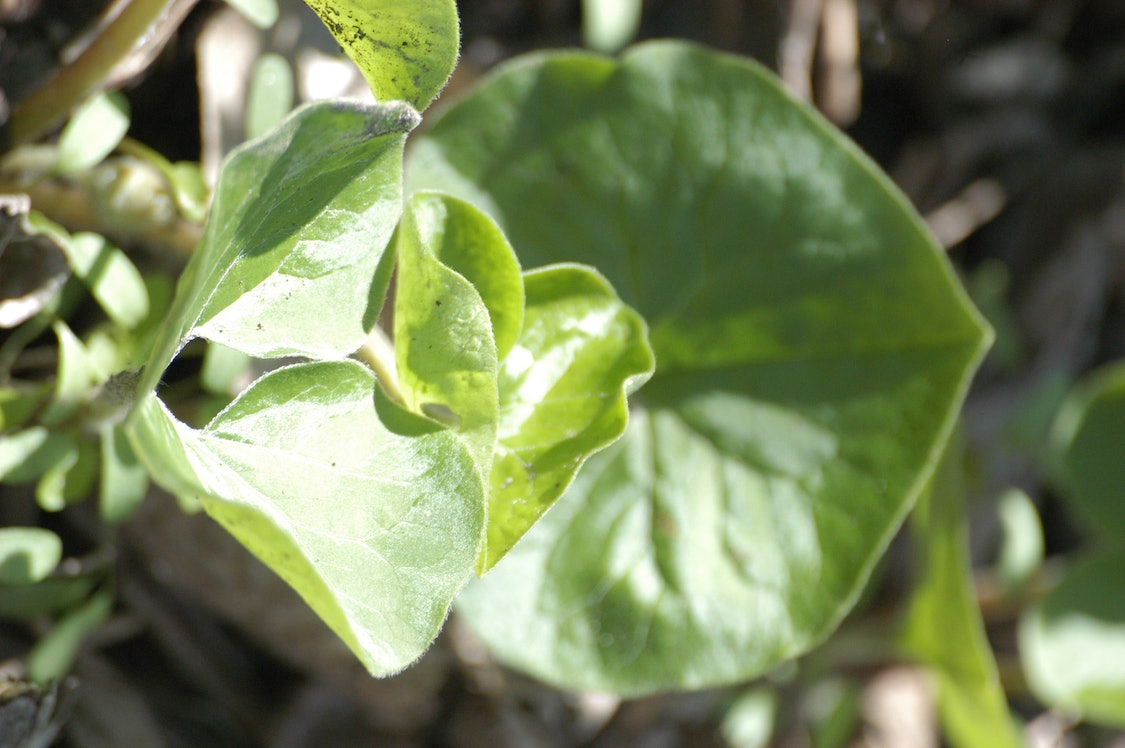 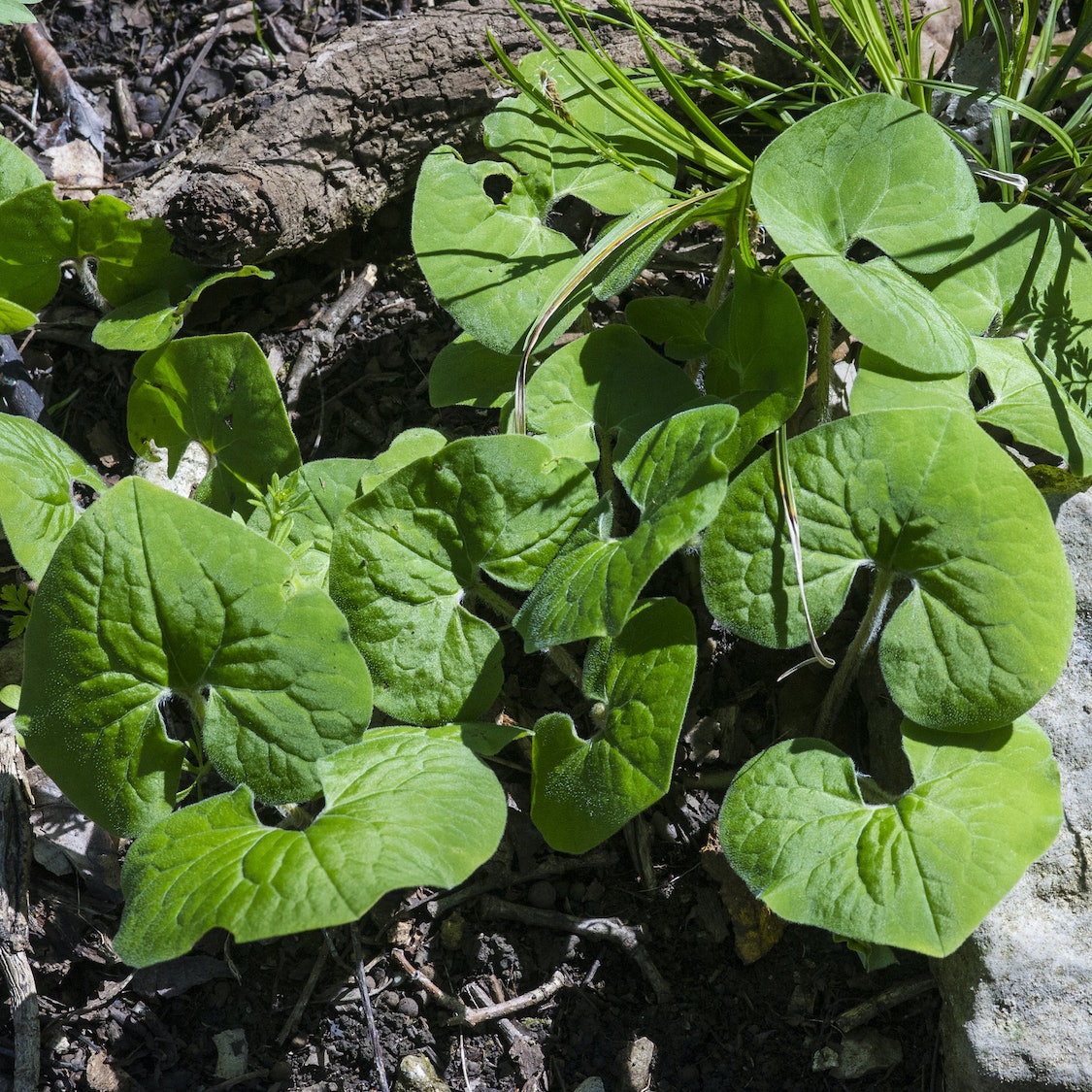 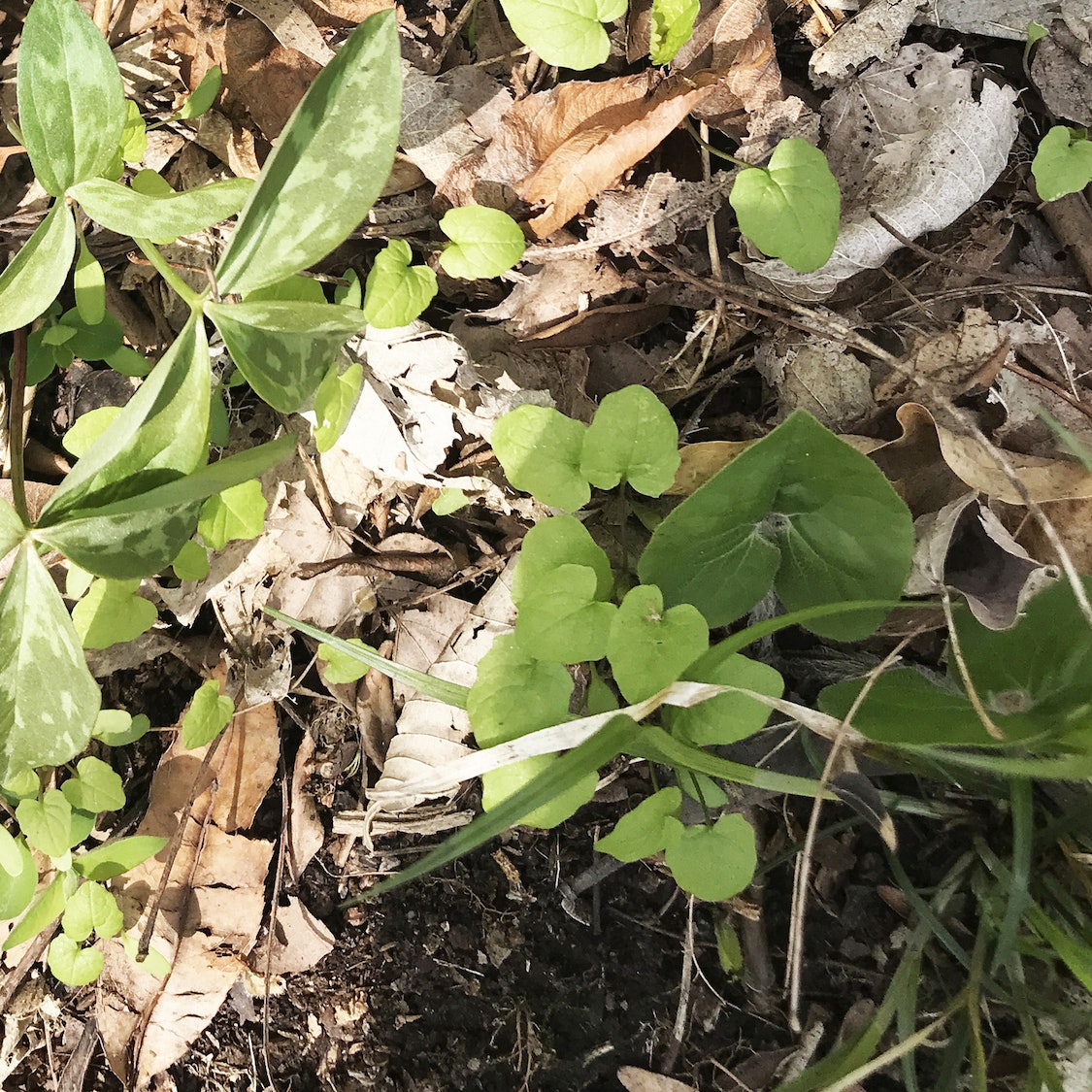 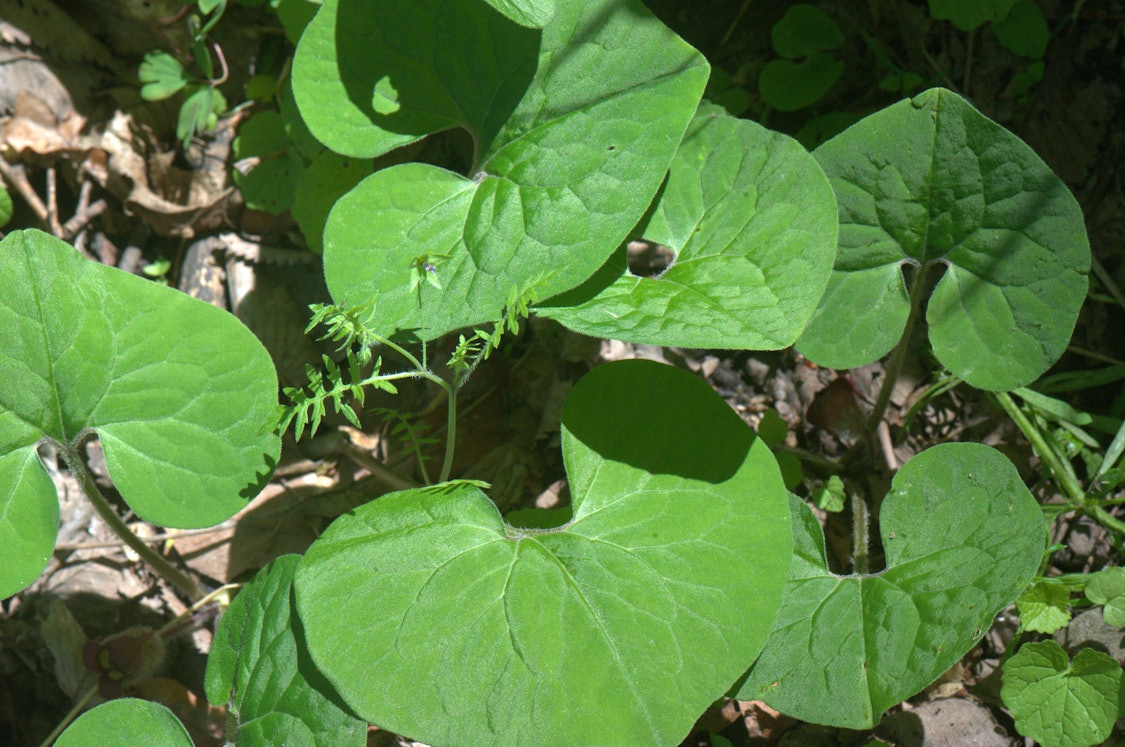 By the time the false rue anemone are blooming and the Virginia waterleaf leaves are growing, you may begin to notice the very hairy little green balls underneath wild ginger leaves. The flower buds are here! 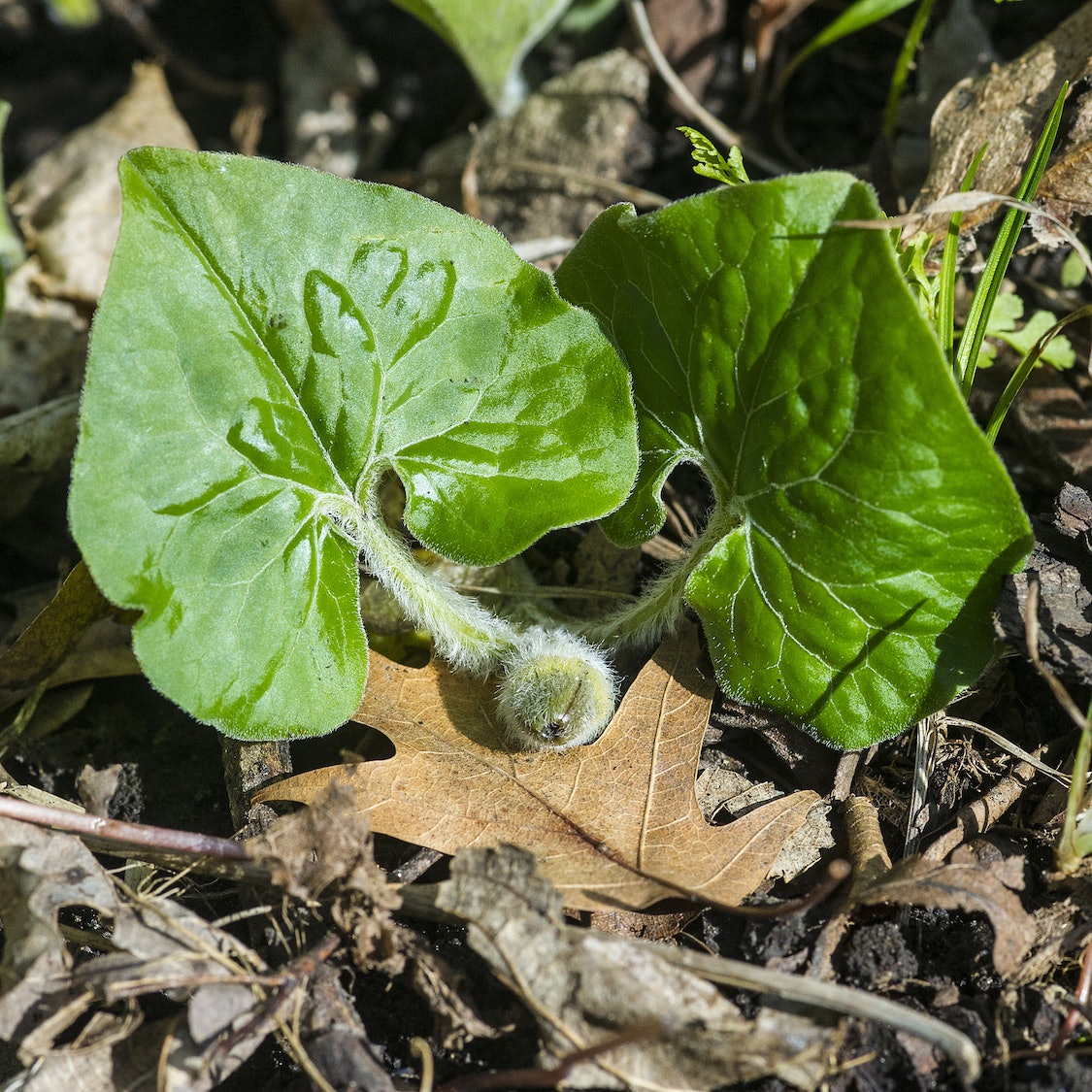 Usually there are two leaves and one hairy bud per plant (though not all plants bloom). The bud slowly turns from green to brownish maroon as it grows and prepares to open. Here is one that is just beginning to unfurl. 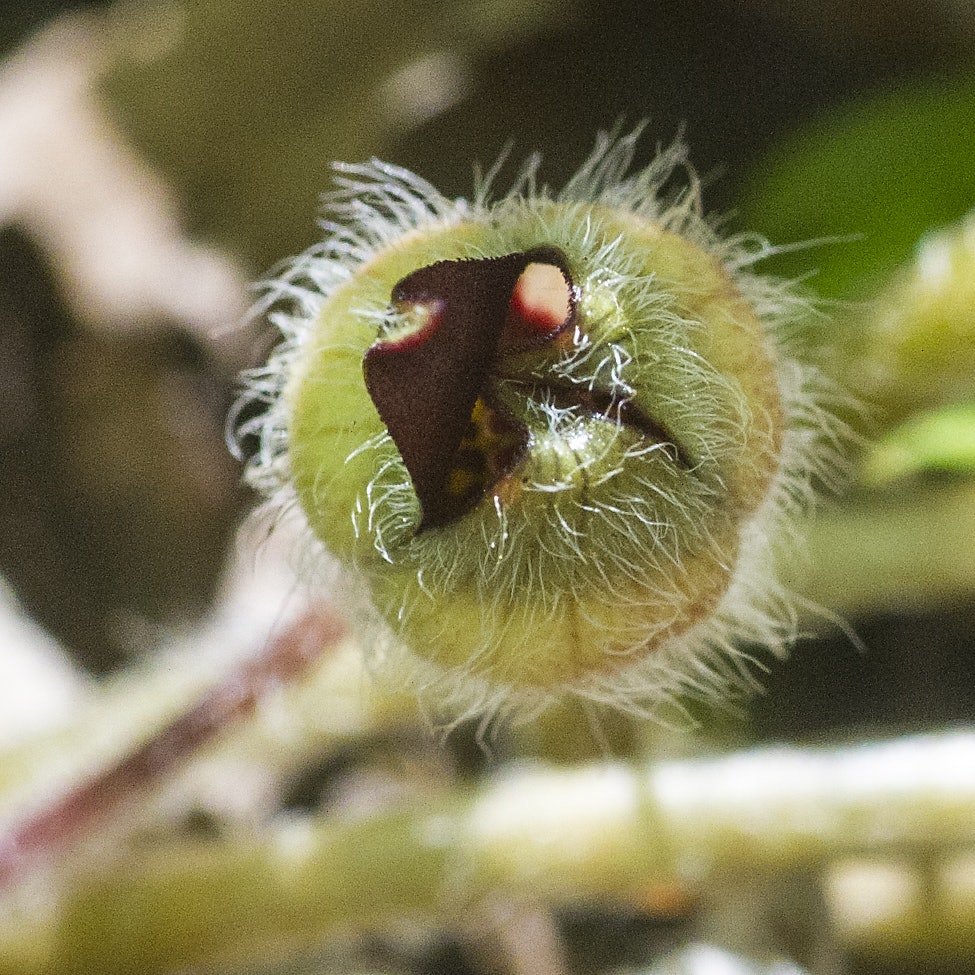 And then there are the blossoms—unique in design color and location, as they lie on the ground under the plant. To see them. you usually need to carefully push aside the large protective leaves above it. Here are several photos of the inside of the blossom—which are reputed to attract and protect early spring flies who think perhaps it's their favorite bit of carrion as they help it pollinate. 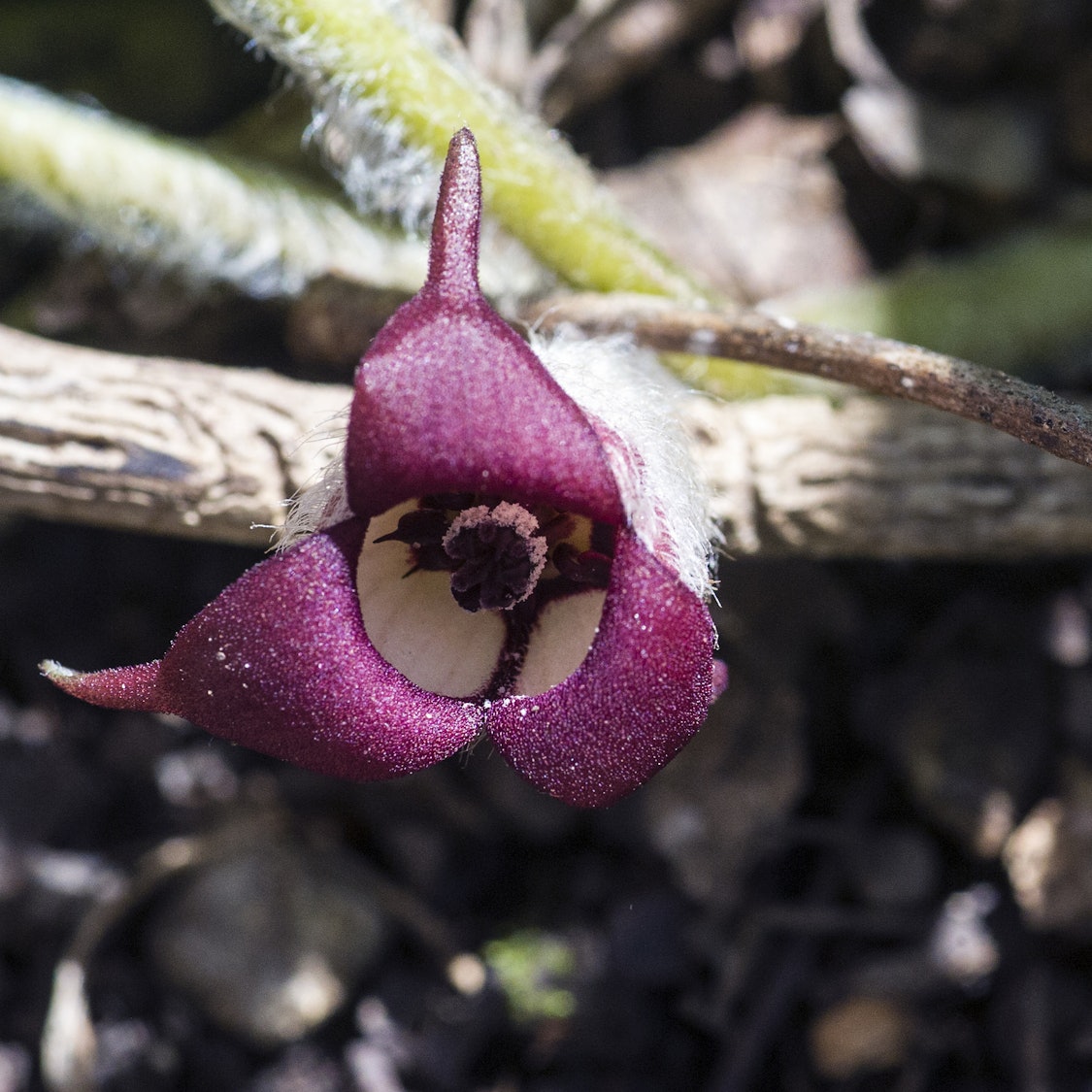 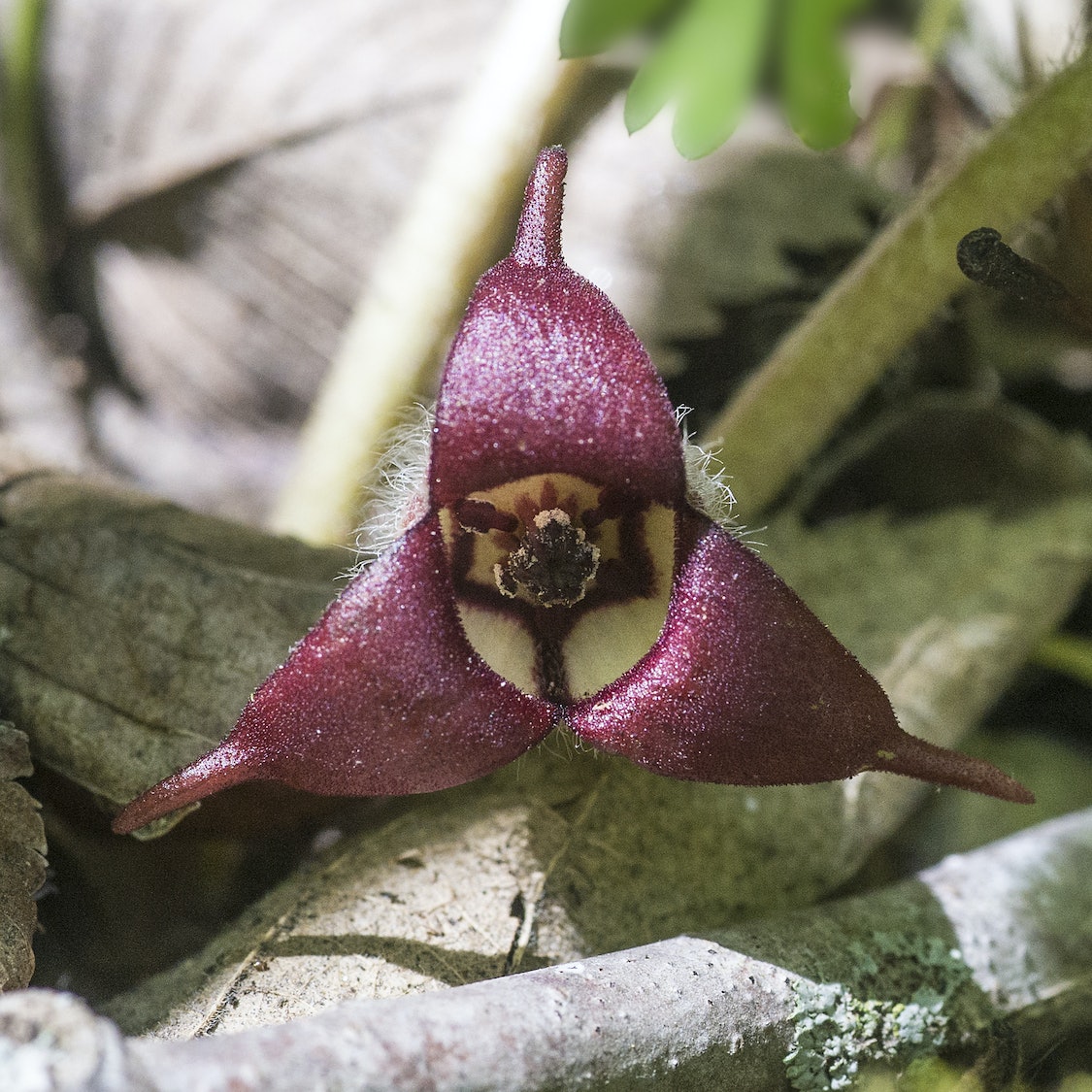 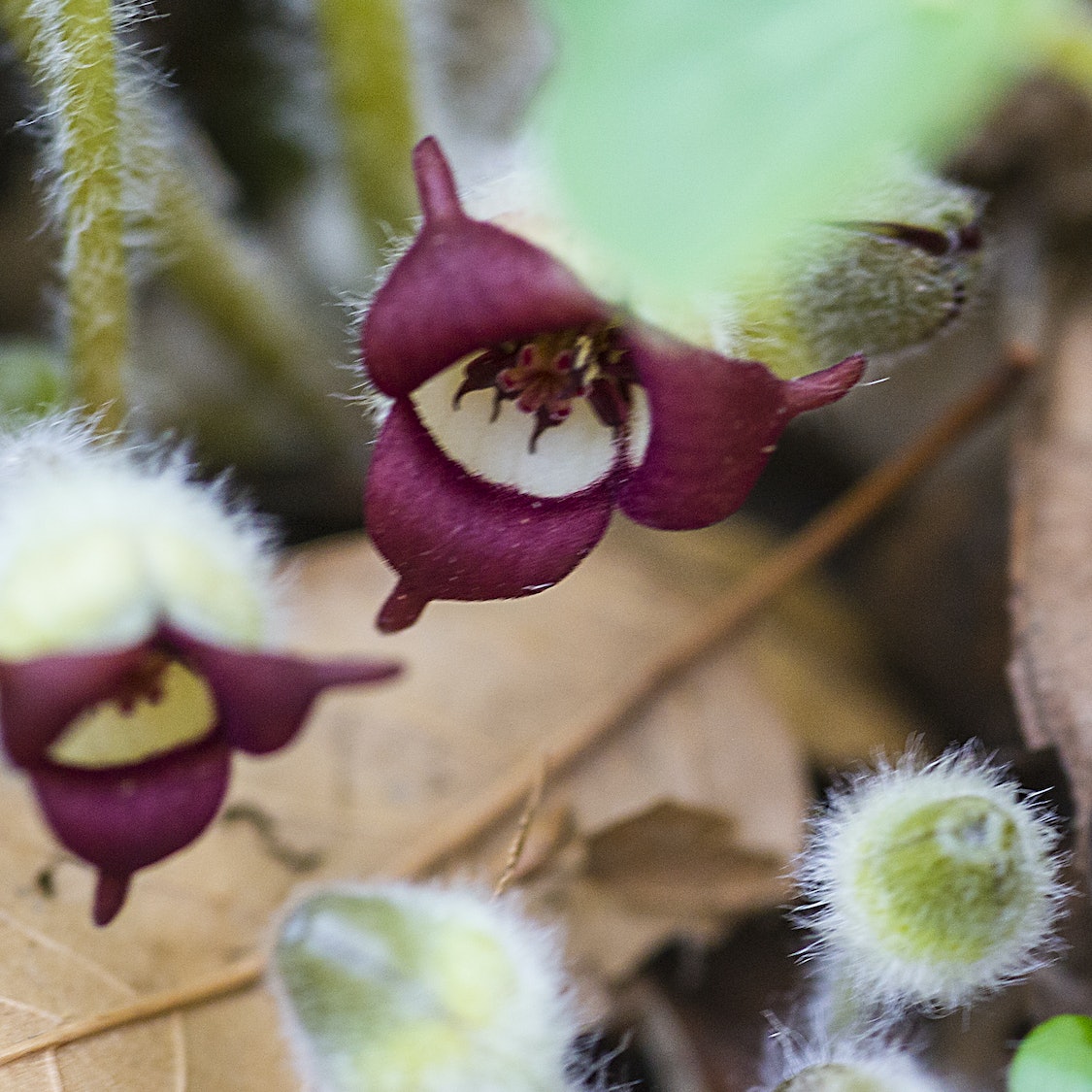 The story continues as the seeds ripen, as Larry Stritch described on the U.S. Forest Service website.

When the seeds finally ripen, they have a little oily food gift attached to the seed; this appendage is called an “elaiosome.” The “elaiosomes” attract ants that carry the seeds off to their underground home where they consume the tasty food and leave the seed to germinate. The ecological advantage is that the seeds are not predated upon by seed-eating animals.

Here is a photo of the just developed seeds inside the pod. 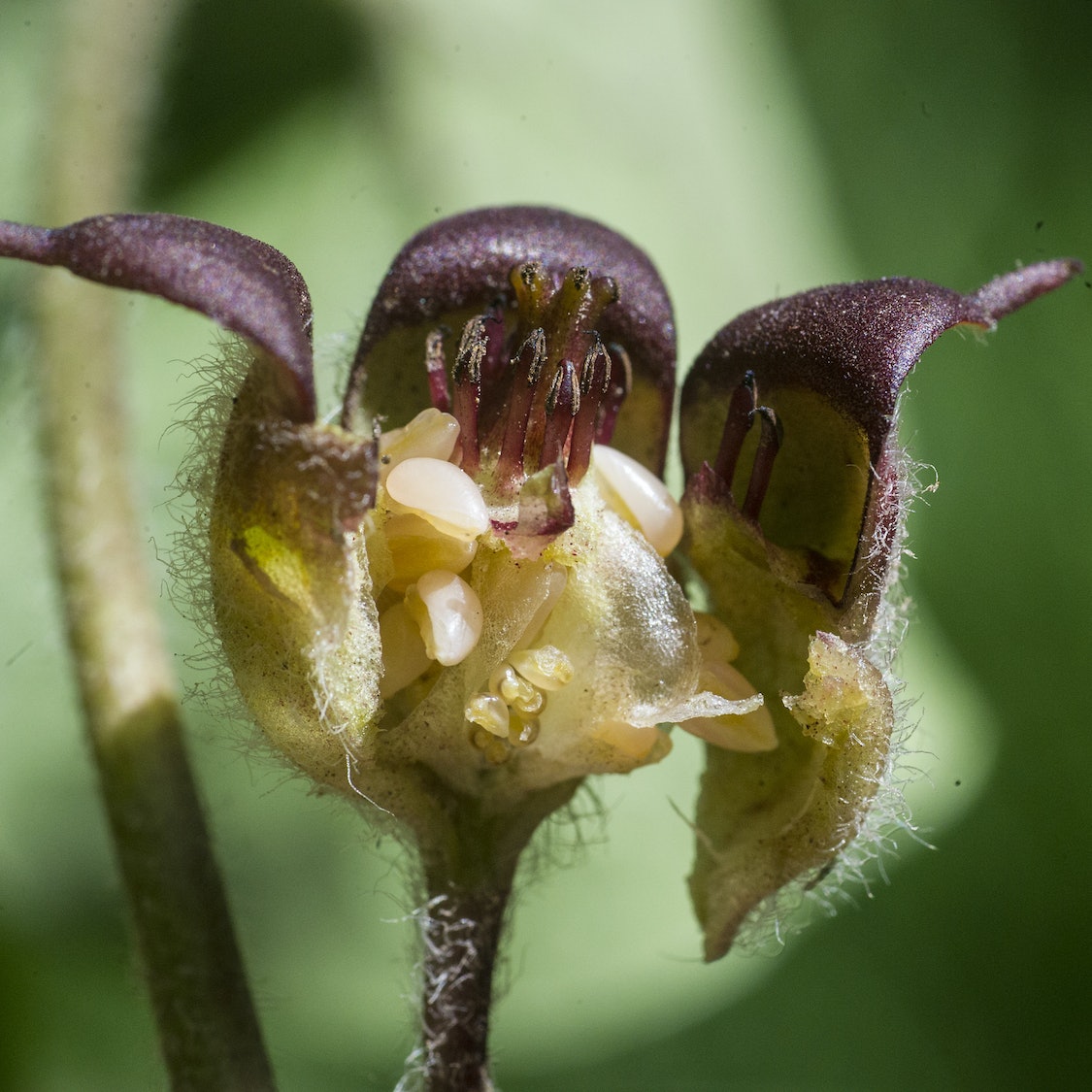 But don't be fooled by its most popular common name—wild ginger. Asarum canadense is not even in the same plant family as the cultivated ginger (Zingiber officinale). Wild ginger is a member of the Aristolochiaceae family. It has been used as a substitute for ginger in culinary applications, due to its flavor by drying the root and grinding it into a powder. However, those uses should be approached with caution. Like sassafras and pokeweed, it can be tasty and has many possible uses, but you need to know what you are doing to avoid possible problems.

Traditionally wild ginger had numerous folk medicine uses, from colic to breaking a fever. More recently, it was used in numerous over the counter “remedies”--until the FDA declared it carcinogenic and nephrotoxic because it contains aristolochic acid. Hank Shaw's blog post called “Wild Ginger: Delicious or Deadly?” addresses these issues.

However, wild ginger roots do contain antibacterial agents active against numerous fungi and bacteria. Indigenous peoples used it in making a poultice to treat wounds and inflammation in the skin and to treat food (often spoiling meat) to make it safer to eat.

Here is an image of an entire plant, sacrificed from a large colony on my own property. You can see how small the root is and that it sprouts one two-leafed plant and one blossom. Looking closely, you can see it spreads by sprouting a new leaf for a plant at the root junctures that show. The smell of the root is that wonderful fresh ginger smell—but the sacrifice too great (a lot of dead plants) to attempt to dig enough to use. 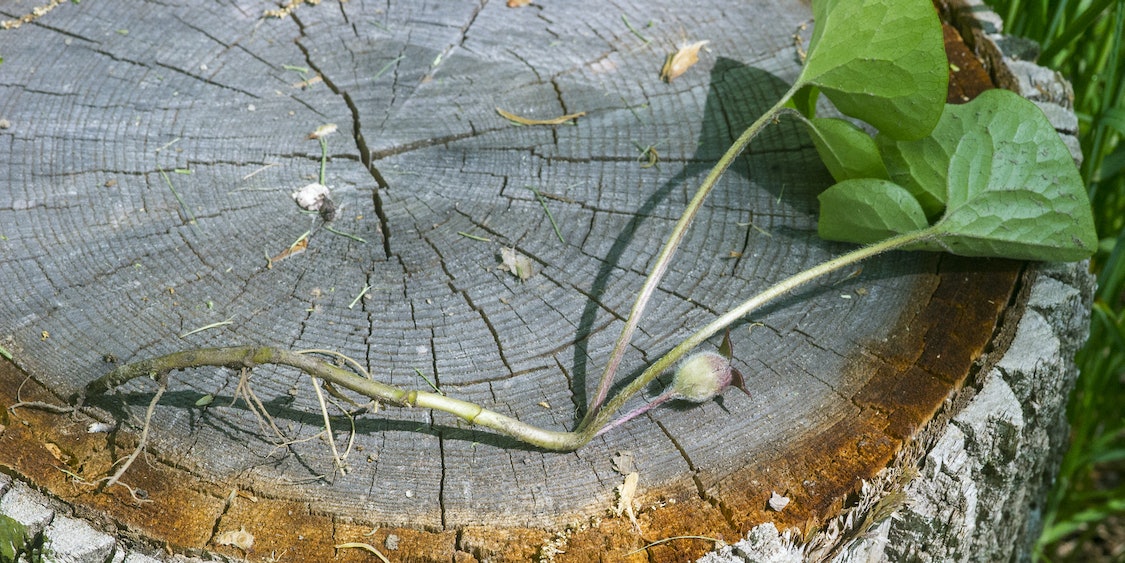 Interested in adding wild ginger to your shade garden? It is an excellent ground cover, as it does not die back like many spring wildflowers but provides leafy cover until fall. It is nearly impossible to raise from seeds and is usually transplanted. However, do not dig roots in federal or state parks nor on private land without permission.

Some native plant nurseries raise plants not collected from the wild. The rhizomes can be dug in the spring, after it has leafed out, then transplanted to a suitable shady, damp area similar to where it was growing. Once established, wild ginger spreads by underground rhizomes and will slowly make a large colony.

The best way to enjoy it is to take a walk in the woods in Iowa and check under the leaves for about a month, from late April until late May. Enjoy. 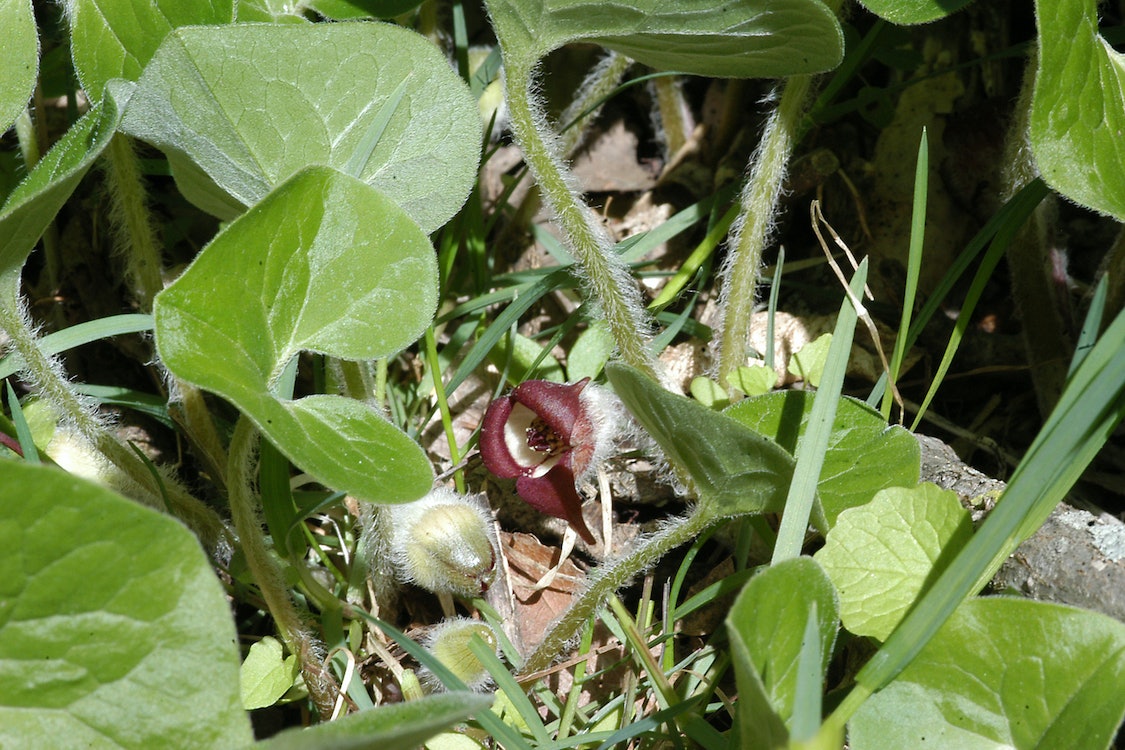