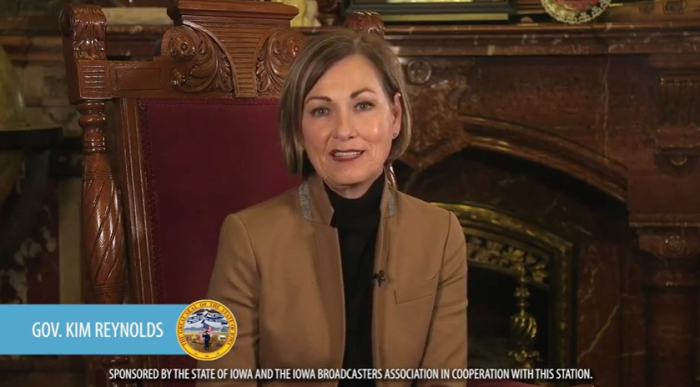 The Iowa Ethics and Campaign Disclosure Board will review advertisements featuring Governor Kim Reynolds, which were funded through federal COVID-19 relief dollars.

The board’s executive director Mike Marshall told Bleeding Heartland on June 18 that some commercials from the “Step Up, Stop the Spread” campaign launched last November “are now under review by the Ethics Board.” Earlier this month, State Auditor Rob Sand asked the board to consider whether the ads violated Iowa’s law banning state officials from engaging in “self-promotion with taxpayer funds.”

Marshall said he anticipates the ethics board will discuss the matter in closed session at its next meeting, scheduled for August 12.

The governor’s office has asserted the commercials were allowable because the first sentence of Iowa Code Chapter 68A.405A states, “Except as provided in sections 29C.3 and 29C.6, […].” Chapter 29C.6 outlines the governor’s disaster emergency powers.

The Iowa Ethics and Campaign Disclosure Board is charged with enforcing all provisions in Iowa Code chapter 68A, including the self-promotion ban. Marshall confirmed to Bleeding Heartland that he did not provide any written opinion to the governor’s office on spending CARES Act funds for commercials including Reynolds’ name, voice, or likeness. In October 2020, he spoke with the governor’s senior legal counsel at the time, Sam Langholz.

Mr. Langholz and I discussed the existence of the 29C.6 exemption in 68A.405A and the circumstances under which it could apply if the state chose to pay for some spots related to COVID-19 in which the Governor might appear. I did not review any spots; to my knowledge, none had yet been made at that time. Given that specific spots are now under review by the Ethics Board, the Board will likely have to determine the proper interpretation of the 29C.6 exemption in 68A.405A.

The state launched the “Step Up, Stop the Spread” public awareness campaign, including newspaper, television, radio, and online advertising, on November 19, 2020.

The State Auditor’s office on June 16 released this “addendum” to the initial report on the “Step Up, Stop the Spread” campaign.

Whereas the governor’s office claimed state auditors had ignored the clause mentioning emergency powers, the addendum “shows the Office did review Chapter 29C prior to issuing the initial report and addresses the Governor’s assertion of two provably false claims in her statement.”

The new report highlighted these passages from the governor’s June 3 press release:

The auditor’s report ignores the opening clause: “Except as provided in sections 29C.3 and 29C.6.” That is a significant error, as 29C.6 relates to the powers and authority of the Governor during a public health disaster emergency.

The Step Up, Stop the Spread campaign promoted social distancing and mask-wearing in November 2020, which was the peak of positive cases of COVID-19 in Iowa. Hospitals and health care facilities were filling with patients being treated for COVID-19. And significantly, the Governor’s Public Health Proclamation of Disaster Emergency mandated (in certain situations) mask-wearing and required social distancing.

Promoting the requirements and recommendations of a disaster proclamation in a public awareness campaign is a clear example of the public-emergency exemption in Iowa’s image-and-likeness statute. And in case of any confusion, Section 29C.6(10)–which, again, is specifically mentioned in section 68A.405A– provides for the use of “all available resources of the state government as reasonably necessary to cope with the disaster emergency and of each political subdivision of the state.”

The addendum notes that contrary to the governor’s claim, the self-promotion law–which Reynolds herself signed in 2018–does not specifically mention code Section 29C.6(10).

The auditor argues that “it is necessary to read all provisions of Iowa Code 29C.6 together.”

29C.6(6) states laws may be suspended “if strict compliance with the provisions of any statute, order or rule would in any way prevent, hinder, or delay necessary action in coping with the emergency by stating in a proclamation such reasons.” This is consistent with this Office’s original report: the statute could have been suspended in writing but was not.

As of January 7, 2021, the Governor had signed 35 disaster proclamations related to Covid-19. Twenty-five (25) proclamations suspend at least one law as part of the pandemic. None of the Governor’s 35 emergency proclamations pursuant to 29C.6 contain a suspension or mention of the self-promotion law at 68A.405A of the Code. Yet other statutes affecting the disposition of state funds were suspended in writing, suggesting the Governor is aware 29C.6(10) cannot be read in isolation from the rest of 29C.6. All proclamations except the first include either the statement, “Nothing contained in this declaration shall be construed as an exemption from any other portion of the Iowa Code or Iowa Administrative Code not specifically identified in this proclamation,” or the statement, “This proclamation shall not be construed to otherwise modify the proclamations issued on (dates preceding).” The Governor’s office points to Iowa Code 29C.6(10) as a justification for why there was no need to suspend the law, because of the language in that section allowing the use of “all available resources.” As already noted, this ignores the requirement of Iowa Code 29C.6(6) that suspended laws must be in writing.

The addendum cites a 1979 advisory opinion, in which the Iowa Attorney General “concluded that Iowa Code Chapter 29C must be narrowly construed, or else it is an unlawful delegation of legislative power.”

The Governor’s broad interpretation of 29C.6(10) would render the rest of the 29C.6 superfluous – if she can do whatever she deems “reasonably necessary” with any state “resource” when she declares an emergency, without putting into writing what laws she is suspending, then no law can be relied upon. Under that reading, the statute could just as easily read, “When the Governor declares an emergency, all laws become subject to the Governor’s continuing approval, whether or not such approval is communicated or recorded.” […]

Iowa Code 29C does not give the Governor absolute power during an emergency. It provides her broad power – she can redirect money, she can suspend certain laws, but she still has to follow certain procedures when she does so. She has to say what she is doing and why she is doing it in a public disaster proclamation. Even in an emergency, she is still subject to the laws regarding emergencies.

If the legislature intended to exempt the Governor from the self-promotion statute during an emergency, it could have done so explicitly in 68A.405A. “In the event of a disaster proclamation pursuant 29C.3 or 29.6, this section shall not apply to the Governor whatsoever.” Instead, the legislature declared 68A.405A applies, “except as provided,” giving the Governor the option of suspending the law in writing pursuant to 29C.6(6). She did not do so.

Three days before launching the “Stop the Spread” advertising campaign, Reynolds imposed new social distancing and mask-wearing requirements in one of her disaster emergency proclamations. The governor’s office said on June 3, “Promoting the requirements and recommendations of a disaster proclamation in a public awareness campaign is a clear example of the public-emergency exemption in Iowa’s image-and-likeness statute.”

The June 16 report from the auditor’s office counters, “This is false: the ad never mentioned any mask mandate nor any other proclamation requirements whatsoever. It only repeated the same recommendations that had been recommended nearly universally by public health professionals around the world for months.”

That’s an accurate description of the television commercial in question (click here to read the transcript).

Despite the attempt in the Governor’s justification to falsely establish timeliness within the paid advertisement, there was no new information being communicated. The Governor only said the same information she had been saying in unpaid public service announcements, weekly press conferences, and paid ads that did not include her. As a result, there appears to be no factual basis for the assertion that it was “reasonably necessary” under 29C.6(10) for her to appear in paid advertisements that merely repeated what had been widely said for months. Similarly, it does not appear that strict compliance with 68A.405A by excluding herself from the advertisements would “in any way prevent, hinder, or delay necessary action” under 29C.6(6).

After receiving a copy of the new report the day before its publication, the governor’s current senior legal counsel Michael Boal responded, “We have received the Auditor’s addendum to his June 3 report. Our office stands by our original statement and we disagree with your interpretation of the law.”

The Iowa Ethics and Campaign Disclosure Board, whose six members were all appointed either by Reynolds or by her predecessor Terry Branstad, will have the final say on the contours of the emergency exemption to the self-promotion ban.

The board’s previous executive director determined in 2018 that the governor’s office could continue to use an Iowa State Fair booth plastered with Reynolds’ name and image, even though the self-promotion law specifically mentions “a paid exhibit display at the Iowa state fair.”