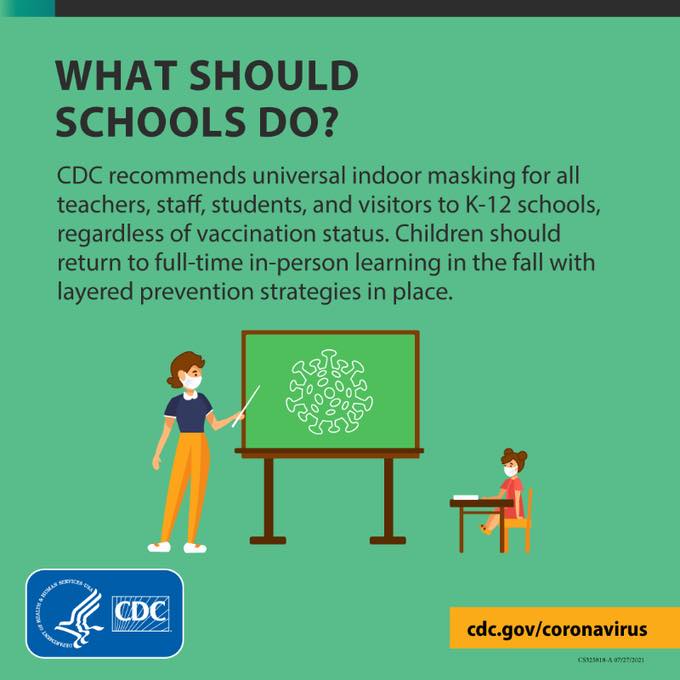 Can Governor Reynolds put Iowa kids' well-being ahead of politics?

Less than a month before school starts, Governor Kim Reynolds is putting politics ahead of my daughter's life and well-being. I am one of the thousands of Iowa parents bearing the burden of having a child under 12, who is too young to be vaccinated against COVID-19.

Anyone following pandemic science updates has been fed a daily diet of rising concern. First, the World Health Organization recommended that all individuals mask inside, even if they are vaccinated. Then the American Academy of Pediatrics recommended that all K-12 students be masked, regardless of vaccination status. The U.S. Centers for Disease Control just echoed that guidance.

As an Iowa parent, I know that it is currently against the law for masks to be required at school. If you're reading this from another state, that may sound bizarre, but I assure you it's true. In May, Reynolds signed a bill in the middle of the night to ban mask mandates, so schools were left scrambling to come up with new policy days from the finish line of a grueling academic year.

We gritted it out until school closed for the summer, and I thought surely someone would sue over the ban during the break. There are so many angles for someone to challenge this policy:

Last week, it occurred to me that no one was going to act without a nudge from somewhere. So I nudged. I called the governor's office (515-281-5211) and spoke with Adam on July 22. I told him I was concerned Delta was spreading among unvaccinated people, and we need to do something, or better yet everything, to protect Iowa's school kids. We need masks and we need surveillance testing.

Adam said he would register my opinion. I said, "Adam, if my child gets COVID-19 and suffers permanent damage to her brain, heart, or lungs, I need to know I did everything I could to protect her." Adam said he'd go find someone.

I then spoke to William in Constituent Services. I told him my concerns about how contagious the Delta variant is and that I felt we needed to act quickly to protect our kids. He told me the governor supports the freedom of every parent to have their child wear a mask. I laughed and said we were too far into this pandemic to pretend that we don't understand how masks work. My child's mask protects her friends, her friends' masks protect everyone around them.

William replied that he did not want to debate the science of masks with me. I suggested that perhaps we could agree that if my child chooses to mask, an N95 mask would better protect her. Was there a plan to provide an N95 mask to every child who wanted one? Or was there testing money available for surveillance testing to catch early cases? Governor Reynolds has crowed about how she turned back federal testing money, so what is her plan to isolate cases before they wipe out an entire school?

William said he would have to get back to me. It's been six days and he has not.

William pointed out that I could homeschool or virtual school my child. I told him I'm a business owner, and that really wouldn't serve Iowa's economic recovery or my family very well.

Furthermore, virtual school isn't an option for us anymore. After seven months of virtual school, our daughter switched teachers to stay virtual, but when her new teacher did her intake assessments, she called me concerned that our daughter had dyslexia, and would need in person instruction to learn how to manage it. She made such dramatic leaps forward the last three months of school that we know she needs to be in the classroom. Is Governor Reynolds really asking me to choose between my daughter's health and her literacy?

William assured me the governor was being advised by scientists--the best scientists! I asked who they were, because it appeared they were not up to date on the latest information about COVID-19. He told me to call the Iowa Department of Public Health at (515) 281-7689. They were advising the governor.

Apparently, the very good scientists do not feel empowered to tell the governor what she should do, but her office claims to be listening to them. Interesting. I have emailed IDPH Director Kelly Garcia about this at Director@DHS.state.ia.us, to ask what they need to feel empowered to stand up to the governor.

I started to scroll Facebook, thinking about all this when I saw this gorgeous green image on Dr. Megan Srinivas' page. It was a graphic from the CDC about recommending universal masks in K-12 schools. 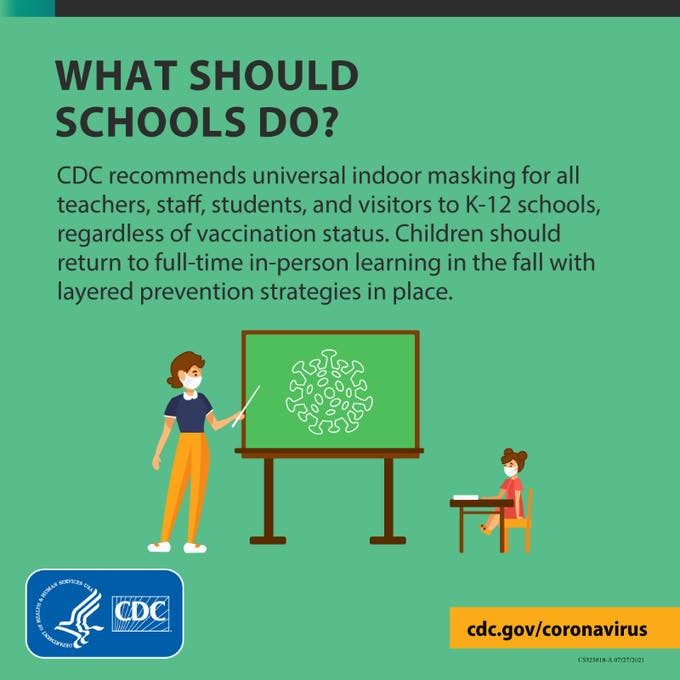 Confession: this past year, I have become a nerd fan for epidemiologists. I contracted the virus in May 2020 (before Greek letter variants) and I developed long haul symptoms. Back then, almost no one was talking about long COVID, so I latched onto anyone who was talking about it.

Before the pandemic, I would get a thrill if a soccer star interacted with me online. Now I live for Twitter likes from @eliowa (Dr. Eli Perencevich, MD MS) and have Dr. Srinivas on a higher "show me their posts" setting than most of my family.

When you're trying to get your brain to function again and your lungs to stop burning when you walk, you nerd out. Hard. On a whim, I asked Srinivas to speak to me about this piece, and she accepted.

Dr. Srinivas signs her posts "Your Local Infectious Disease Doctor," but when I asked her to explain what she does, I realized she's exactly who Reynolds should be listening to. Her title is roughly a paragraph long: she's an Infectious Disease Physician at UNC (she studies COVID and things like it), Clinical Instructor (Doctors who teach future Doctors and public health professionals), but here's the phrase that caught me: "Translational Health Policy Researcher" (she researches illnesses like COVID and translates her findings into public policy). Her niche is researching how we can change systems to function in a more equitable way.

I asked what she thought of Reynolds' latest statements about masks. She said,

Governor Reynolds is missing the point by saying the CDC's guidance to mask is "counterproductive to our vaccination efforts." We need vaccination and masks to work together to get an outbreak under control. We use masks to control disease spread, but we need vaccination to limit the number of available hosts the virus can jump to.

Not only is every single infection a person's life that can be forever changed by this disease, but Dr. Srinivas stressed that limiting transmission is one of the most important things we can do to save ourselves from variants even worse than Delta. "One of the biggest issues is [Reynolds] makes it seem like it's mask vs. vaccination, but they are meant to be used together. In fact, having both masks and vaccines is the best way to control spread and save Iowans' lives."

I mention that I have seen people saying kids are safe. But the scientific fact is that as Delta variant numbers increase, so does the likelihood of exposure. "Delta has an increased affinity to younger people compared to earlier strains," Srivinas explained. Kids are more likely to catch the Delta variant, and they are more likely to become seriously ill from it.

I started searching for data on how many children have died from COVID-19 so far, but honestly, I had to stop before I got the answer. The stories that came through in my searches were too much to bear. The number is not zero, and that is enough. Do we really want to risk the loss of even one Iowa child because Kim Reynolds doesn't support masks?

And even if no child dies, Delta can cause very serious disease. Children suffer long haul COVID at rates similar to adults. They can face long term physical damage, psychological illnesses, heart and lung damage.

I have been saying to any Facebook commenter who would listen that my thirteen months in COVID "recovery" have been a struggle I would not wish upon any child, but Srinivas cautioned the risks could be higher for children. "Children are still developing, and we don't have long term data on what this will do to them. If we alter something in their developing body, will it impinge on their development permanently?"

Older generations will remember that post-polio syndrome took years to surface. We have no idea what coronavirus survivors will face decades from now, but we should be doing more to protect those with the longest to live as a survivor.

We had been talking for about 40 minutes when I asked Srinivas if she had anything else to add. Her comment really resonated for me as a business owning mom of three, trying to get through the beast:

We have to stop saying it's lives or livelihoods. Lives and livelihoods go hand in hand. Stability and equity of healthy lives promotes a thriving livelihood, and that's good for Iowa families and our economy. The question is, are politics going to get in the way of the well-being of Iowans?

For me, the answer must be no. We must act now. Call the governor. Call your school. Call your city council, your state senator, your representative. Do not rest until we have the simple things like universal masking to protect Iowa's future.