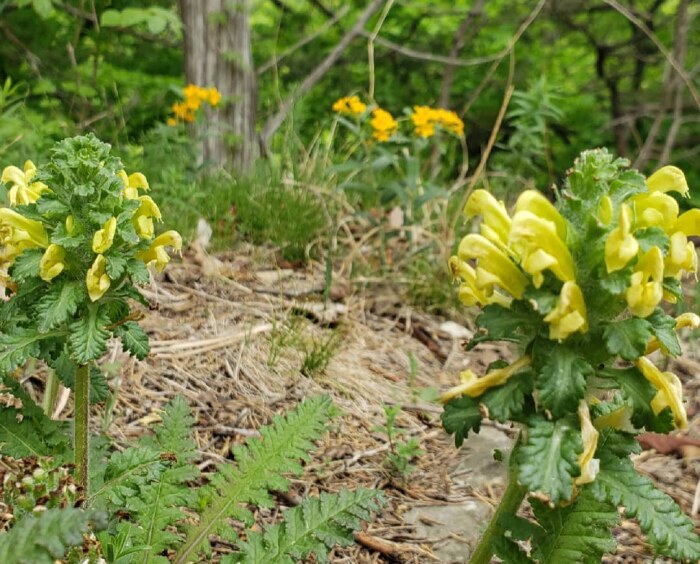 Bloody Run Creek, for which the park is named, is one of Iowa's few official Outstanding Waters, an Iowa Department of Natural Resources designation reserved for water bodies with exceptionally high quality. The name conjures up evocative imagery of battles won and lost in ages past. Indeed, local folklore offers an array of colorful etymologies and, fact-based or not, they speak to the rugged valley's longstanding appreciation and respect from the people who know it best.

But the park has another story to tell. It's not one passed down through written or oral tradition, but rather buried under decades of leaf litter, lying in the soil, waiting for the right sets of ears to come along and start the conversation.

Oak savannas, like prairies, once covered vast areas of the upper Mississippi valley. Like prairies, they have declined dramatically in the era of European settlement. Like prairies, they have absolutely staggering diversity. In fact, a high-quality oak savanna might have even more diversity than the sun-baked prairie; dappled shade from the towering oaks allows a mix of light levels, creating a habitat mosaic that accommodates shade and sun lovers alike. 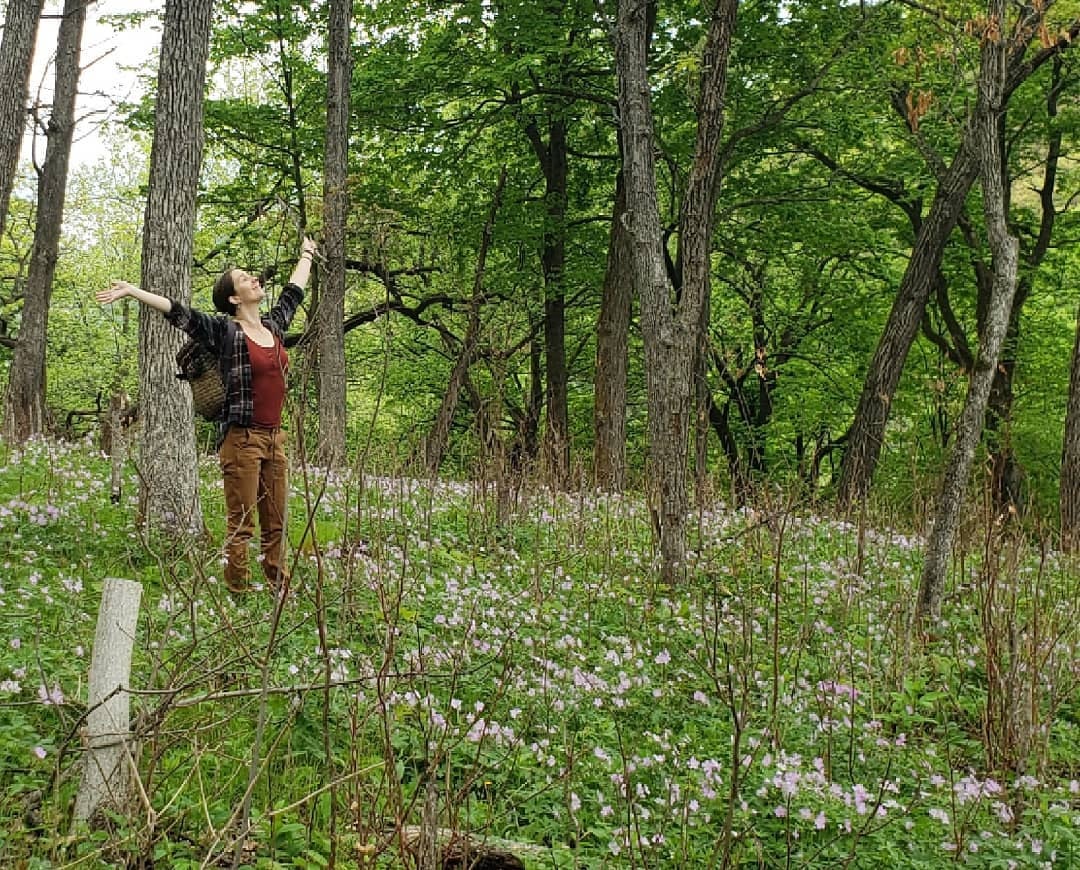 Less rare photo of the author's wife drinking it all in

Recognizing the ancient "wolf oaks," Tim used the site not only for restoration but also for stress relief. Lugging a chainsaw up the rocky bluff and laying waste to the undesirable tree species lets the sunlight in, through the canopy and onto the falling acorns and suppressed wildflowers. The stress clouding the mind of whoever is doing the work dissipates.

Fast forward to 2010. I picked up my first job with the National Park Service as an interpreter for Effigy Mounds National Monument. I lived in Marquette. I frequently ran the beautiful gravel road leading to Bloody Run, and found my own stress relief watching rainbow trout chase my spinner through the crystalline waters of the creek. I fell in love with the Driftless area. In 2015, tired of the seasonal life, I found a job posting for the Clayton County Conservation Board. I remembered Clayton County!

"Hey, they manage Bloody Run! I love that park," I thought. And that was that.

Early on, I took a ramble up those same steep bluffs Tim had climbed, and was awestruck by the open, park-like stand of oaks hidden from view from the campground below. It felt like I'd stumbled upon a secret, one that perhaps the general public whose park we stewarded would enjoy.

I dug through some old management plans and learned that long ago, the board had ambitions to put a hiking trail in through the blufftops. "I could do that," I thought, my first love in conservation being trail work. The board agreed, grants were written, and by the end of 2016 slightly less intrepid explorers now had access to the amazing work Tim had begun decades ago - and so did I.

Before and after of the trail carving into the restored savanna

LETTING THE DAYLIGHT IN

With improved ability to reach the site, we began removing more of the understory trees to let the daylight in. We opened up some stands of similar character on two more adjacent blufftops. In 2019, we finally had a sufficient fuel load to run a prescribed fire through. It was totally unlike a prairie burn - punky, slow-moving, patchy. But it worked.

We burned again in 2020 and 2021, on the advice of some folks who have been at this a lot longer than me. They said repeated stress early in the restoration can save a lot of backsliding down the road.

Little by little, the site's history unfolded before us. Each spring brought a few new footnotes revealing the stunning natural history of a true, remnant oak savanna. We've never seeded the site, and before the burning and cutting, it looked like too many other woodlands in Iowa - a naked understory, overbrowsed by deer, choked with garlic mustard, the only oaks in sight maturing rapidly in the upper canopy with no new generation waiting below. 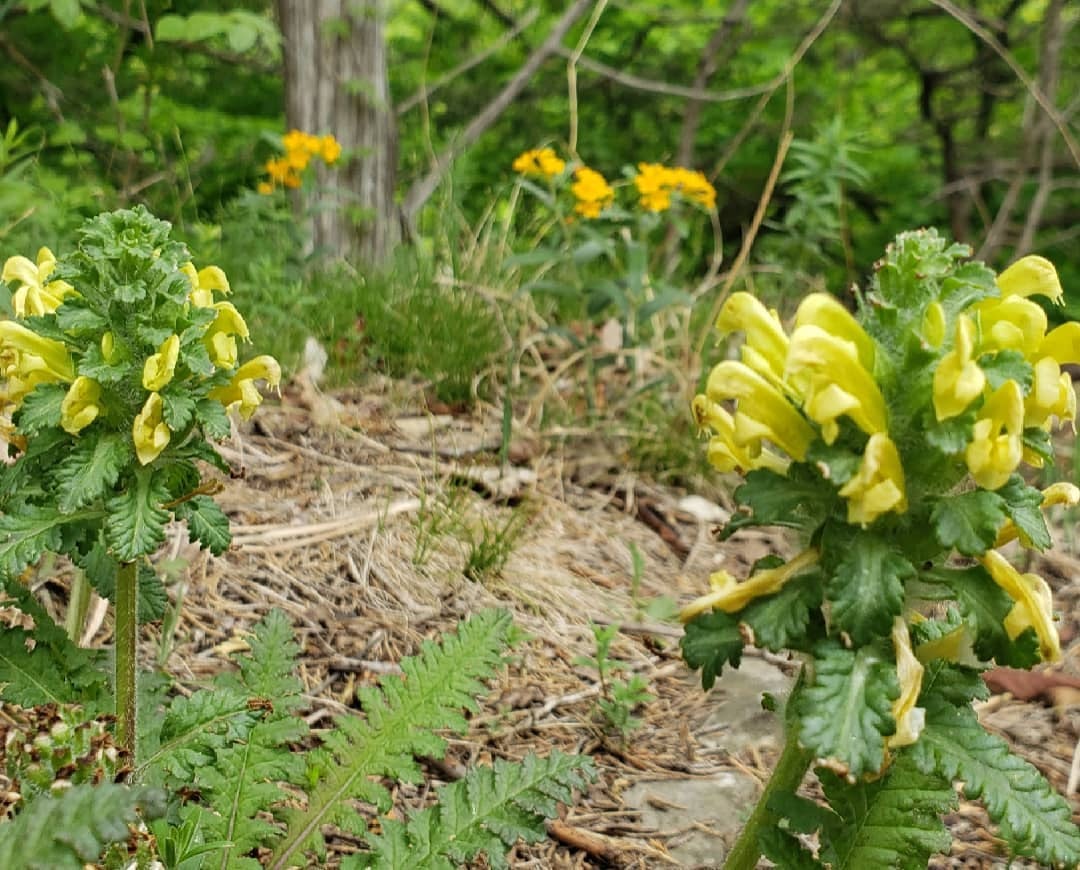 Canadian wood betony, one of many oak savanna "indicator" species

Seemingly every time we'd go up there, something new and remarkable had emerged from a site that for decades never had that species documented.

It's fascinating, of course, ecologically. Seeds can blow in from a long ways, and critters ably carry out their seed dispersal duties, but almost certainly many of these plants had simply existed already in the soil's seedbank. Some seeds may remain viable for incredibly long time spans, or as root fragments, corms, or other underground organs clinging to life until the right conditions returned for an emergence and bloom. 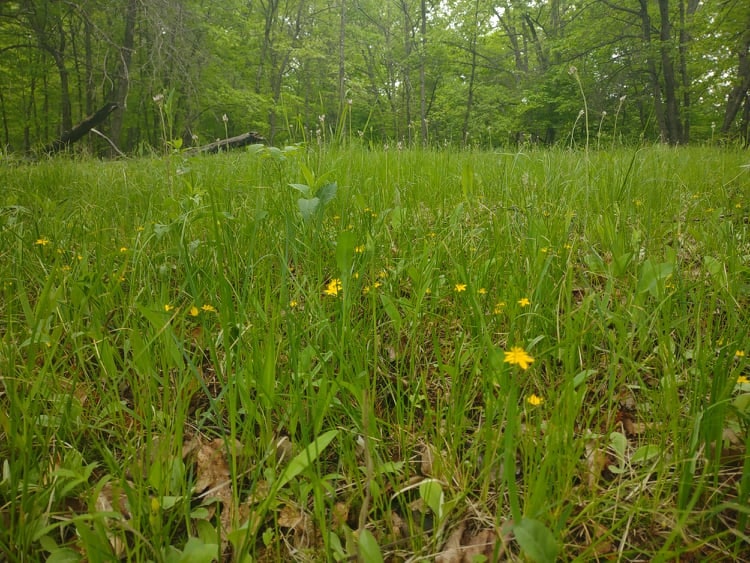 AN IMPORTANT ROLE FOR HUMANS

But the story also ties in to the importance, anthropologically and spiritually, of rediscovering our place within that ecology. Without a keen eye for what could be, Tim might not have recognized the opportunity to do well for himself and the land in one shot. I told him when I first noticed puccoon on the site. He pumped his fist triumphantly.

"You didn't know they were up there?"

"Nope! Just started cutting, never got to see much of what came next." 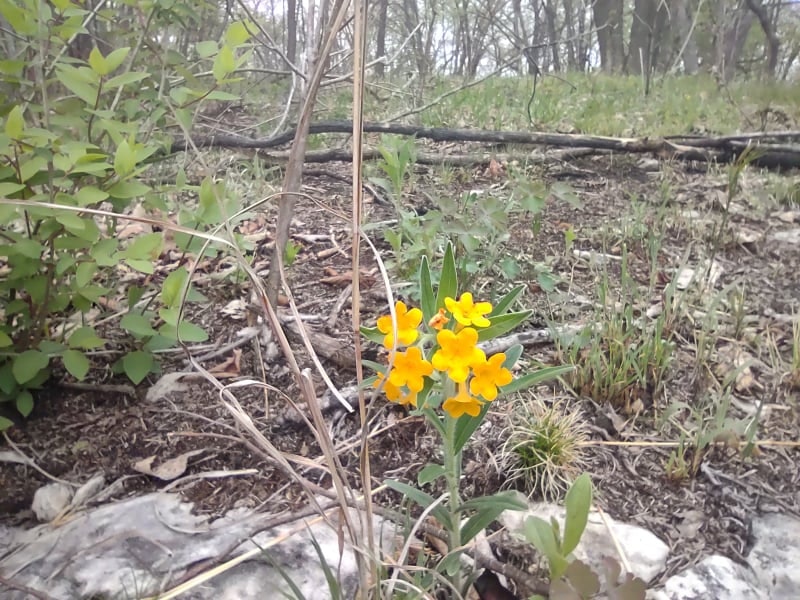 Hoary puccoon, also known as "what came next"

What Tim had done was obey Aldo Leopold's first tool of intelligent tinkering - he kept all the pieces. It may seem destructive to look upon a savanna restoration. Sawed stumps, piled brush, burn scars. Indeed, it looks like a lot of pieces actually are removed. But to return the site to its wildest character, thriving with the full cast of characters that a healthy oak savanna should have, Tim needed to reintroduce one very specific species - humans. 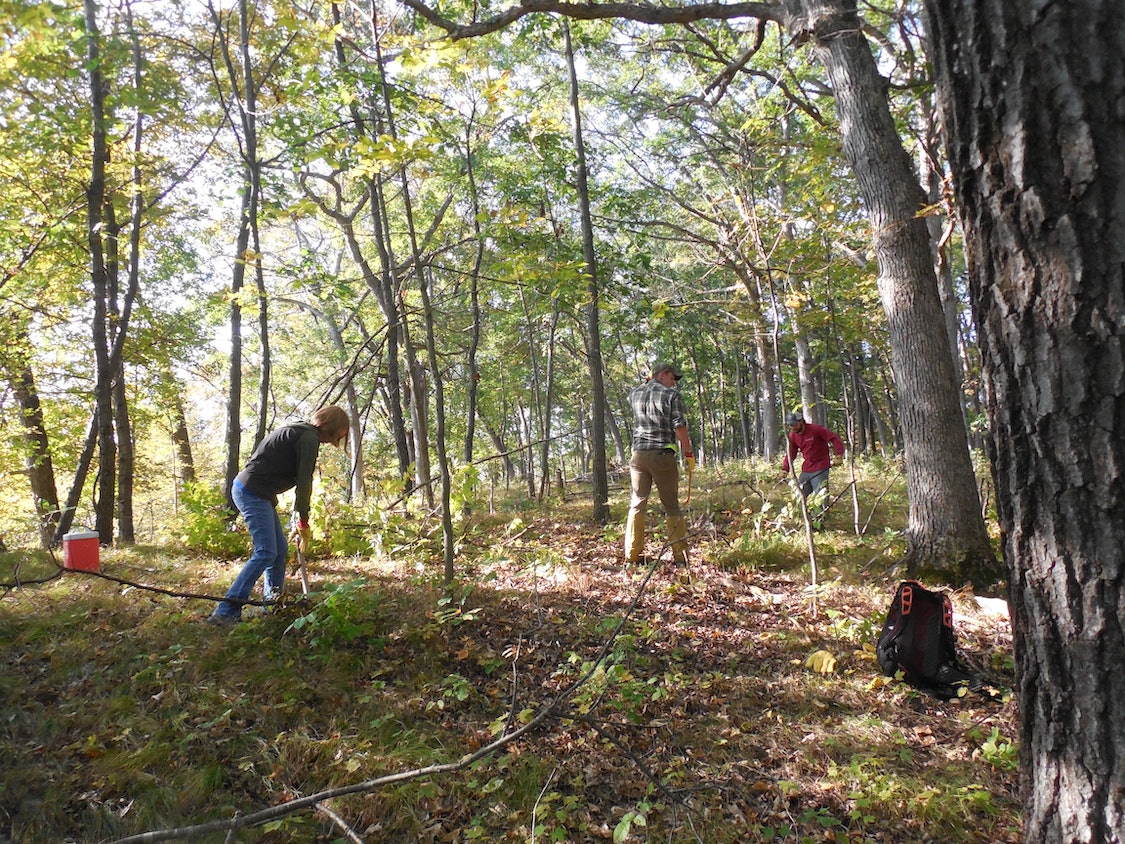 I first learned the concept of wilderness working on a trail crew in western Montana. Like many people, my early conceptions of wilderness reflected those laid out in the congressional designation - "A place where man himself is a visitor who does not remain."

But now I realize there's a big problem in that definition. It refers only to those places inhospitable to all but the most specially-adapted plants, animals, and fungi. By that definition, Iowa hasn't had a true wilderness in over 10,000 years. After all, humans have had a pretty substantial presence on the site for essentially the entire Holocene.

I don't think anyone who had the chance to visit Bloody Run 500 years ago would say the wild mosaic of upland grasslands, riparian forest, floodplains, and productive coldwater streams didn't meet the spirit of wilderness, if not the bureaucratic definition. Oak savannas and prairies have some of the highest biodiversity of any ecosystem found in North America, and increasingly we're learning that their development and sustainability depend on our involvement. 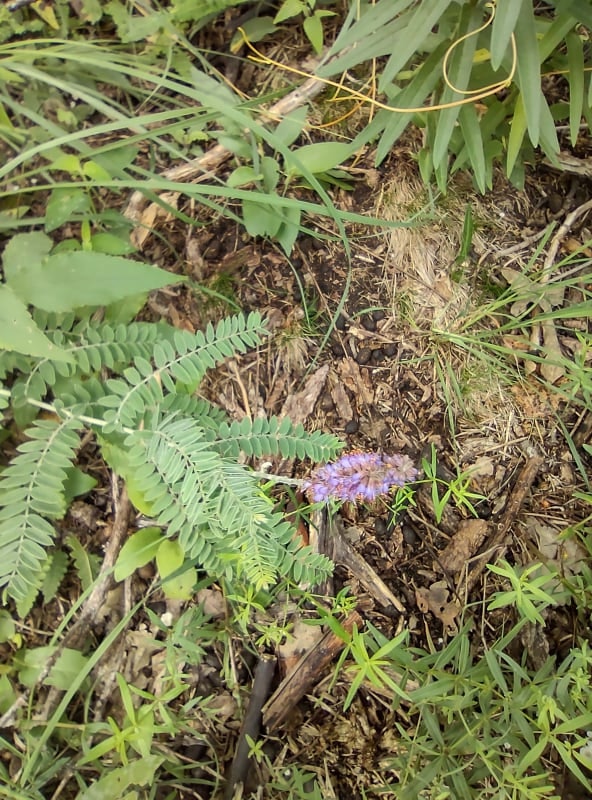 Leadplant, an indicator of "high quality habitat," emerged only after intense human intervention

Perhaps that's part of the reason Iowa is one of only six states without a formally protected wilderness. That same idea - that the highest form of protection is to step aside entirely - has manifested in major degradation of those ecosystems where humans have played a keystone role for millennia.

Rightful concerns about the logging of old growth forests in the West, or the wanton destruction of the Amazon rainforest, became an overgeneralized ethos that cutting trees is bad. And Smokey Bear... man, don't even get a fire ecologist started on that guy. 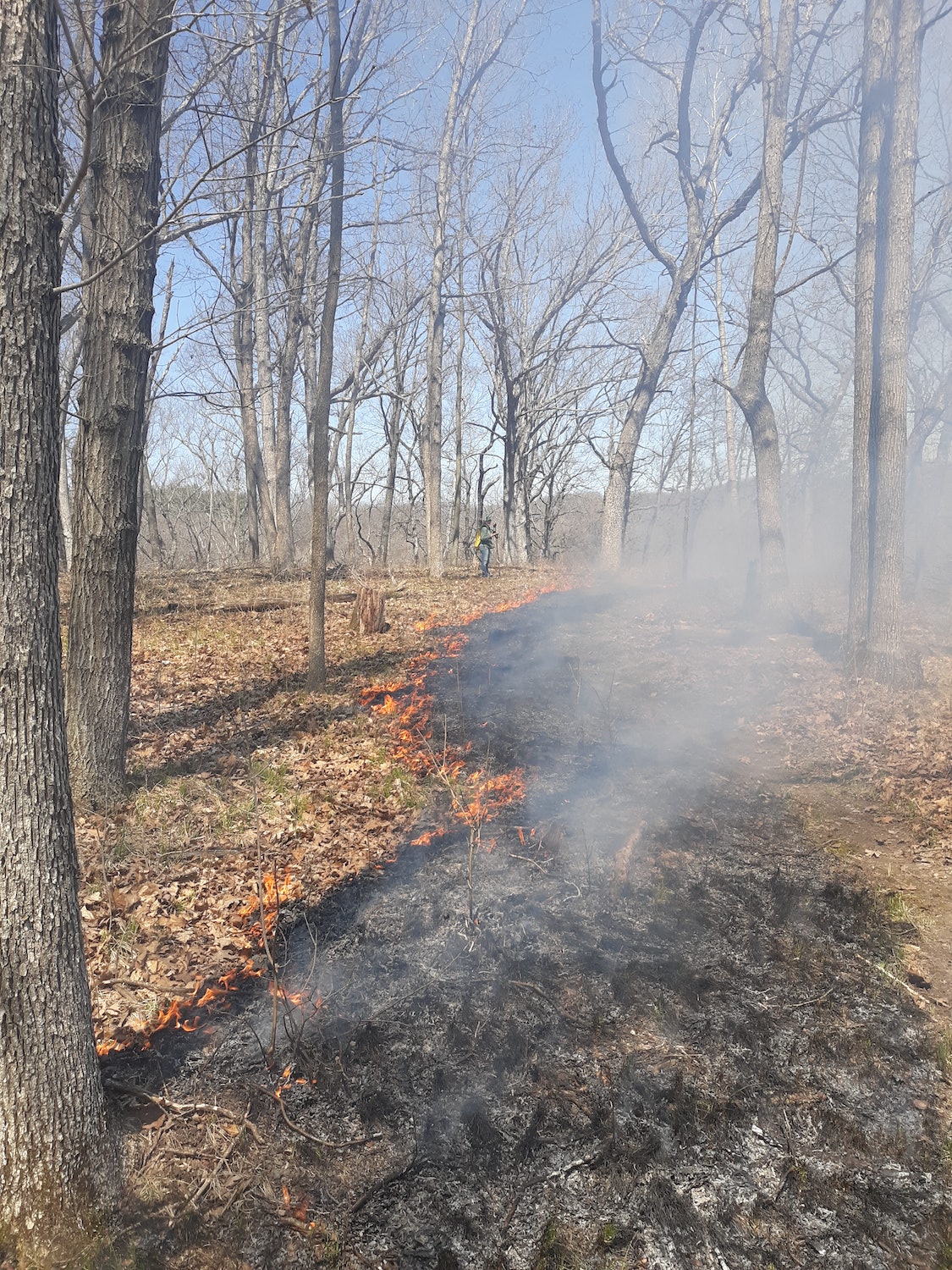 I think most environmentally conscious persons would agree: the best method of restoring truly wild character would mean embracing the full suite of ecological processes that allowed innumerable relationships to develop between all the flora and fauna endemic to a site. It's a mistake, then, to apply that more formal, "traditional" concept of wilderness to huge portions of the landscape where humans have carried out those processes since the glaciers retreated.

Places like Bloody Run have evolved amidst frequent disturbance. Floods. Fire, anthropogenic and otherwise. The trampling, munching, and cutting of plants en masse by a whole array of critters, some of which walked on only two legs and carried sharpened stones to disrupt the forest.

Overlook along the Well's Hollow Trail

Bloody Run, and a thousand other stories just like it throughout the upper Midwest, tells us we need to reassess our picture of wilderness. We need to reexamine and embrace our place in that picture. We know a lot more than we did two hundred years ago, arriving by boat or wagon from some far-off land with little awareness of how to keep the ground beneath our feet stable and productive. We screwed up then by doing too much. We screwed up more recently by not doing enough, failing to realize our mistakes weren't what we did but how we did it.

But the land is resilient. It's willing to work with us. It's willing to teach us, if we can learn to be good students and recognize the text. It's willing to show gratitude and reciprocity when we do right. Uncovering lost ecosystems is as much archaeological as it is ecological. We gain priceless knowledge about our world and ourselves that would remain lost forever if we simply walked away.

What's more, anyone who has worked in ecological restoration can testify to the personal restoration that goes along with it. We enjoy the work. The stress relief component is real, no matter how intense the physical demands. Many of the people who spend hours cutting and hauling brush, scrambling up and down rugged slopes in freezing cold or sweltering heat, would not be caught dead in a Crossfit class. There's a feeling of belonging and satisfaction that comes from the labor. The work has meaning.

I believe that feeling comes from reconnecting with our natural role, one that we lost, and one that we desperately need to find again here in Iowa and everywhere that our species' evolution intertwined with that of the birds, bees, and flowers on which we depend. 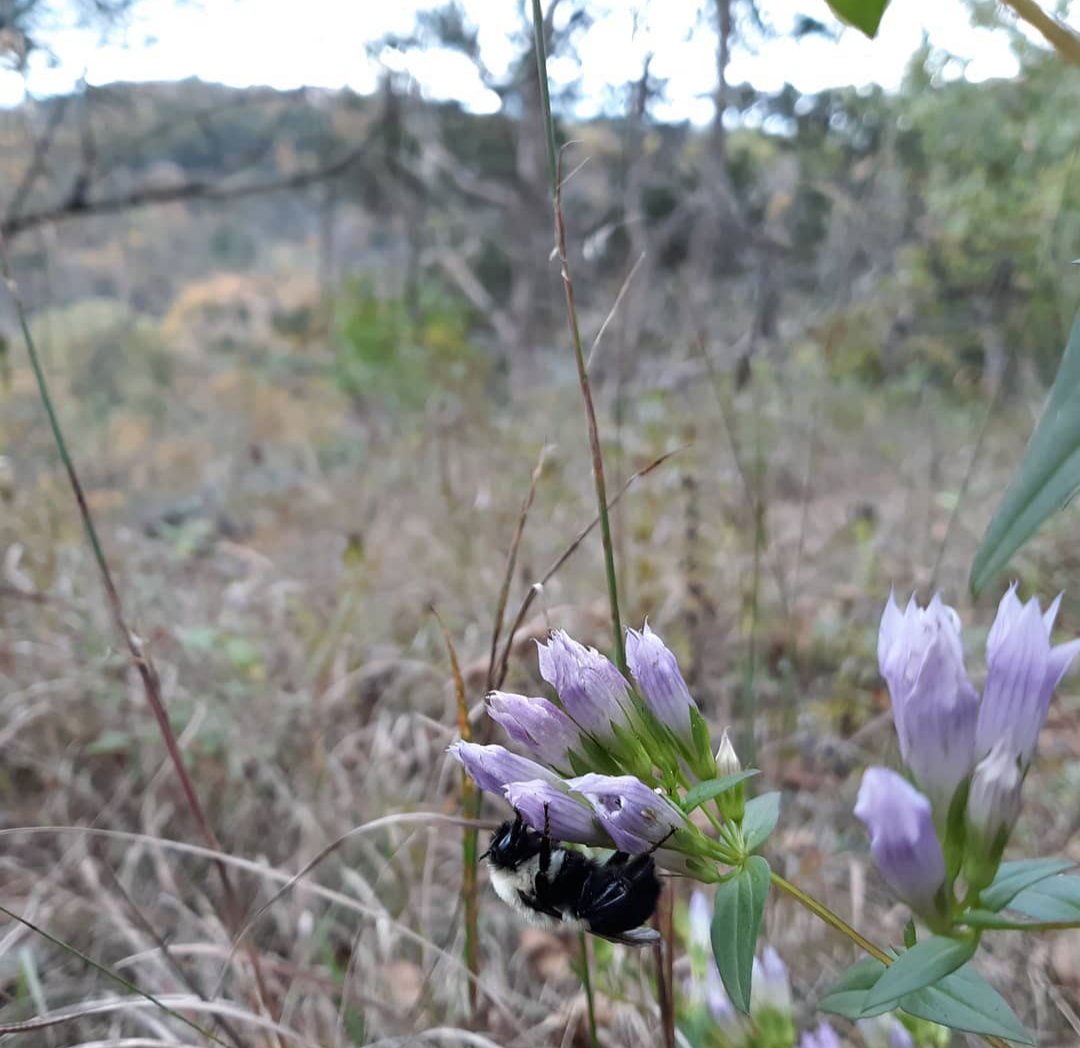