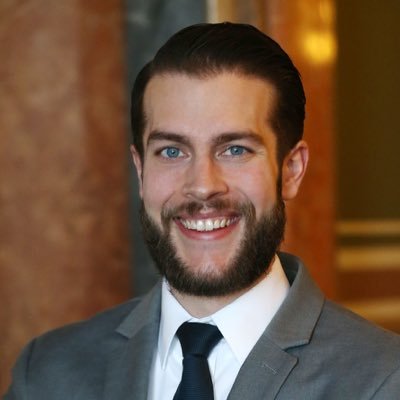 Boal, who is the records custodian for the governor’s office, did not acknowledge receipt of the request at that time. He also ignored follow-up emails on June 30 and July 23, as did the governor’s chief of staff Sara Craig Gongol and spokesperson Pat Garrett, whom I copied on that correspondence. Staff at the veterans home likewise did not provide any responsive records.

Iowa Code Chapter 22 sets no deadlines for release of public records but states that “a reasonable delay” for determining whether a record should be withheld as confidential “shall not exceed twenty calendar days and ordinarily should not exceed ten business days. Reynolds told journalists in early January that she intended to be “open and transparent” and would commit to having staff respond to records requests “in a timely manner.”

Boal and Reynolds are named defendants in two lawsuits filed this month by Utah attorney Suzette Rasmussen, who charged the governor “refused to timely and meaningfully respond” to requests submitted in March for correspondence related to Iowa’s COVID-19 testing program. State law allows a court to remove a person from office over repeat open records violations, in some circumstances.

While emailing Boal on August 20 about various other outstanding records requests, I received a reply with the commandant’s dismissal letter attached. Craig Gongol informed Oujiri on May 5 that his employment was being terminated immediately “due to job performance issues.” 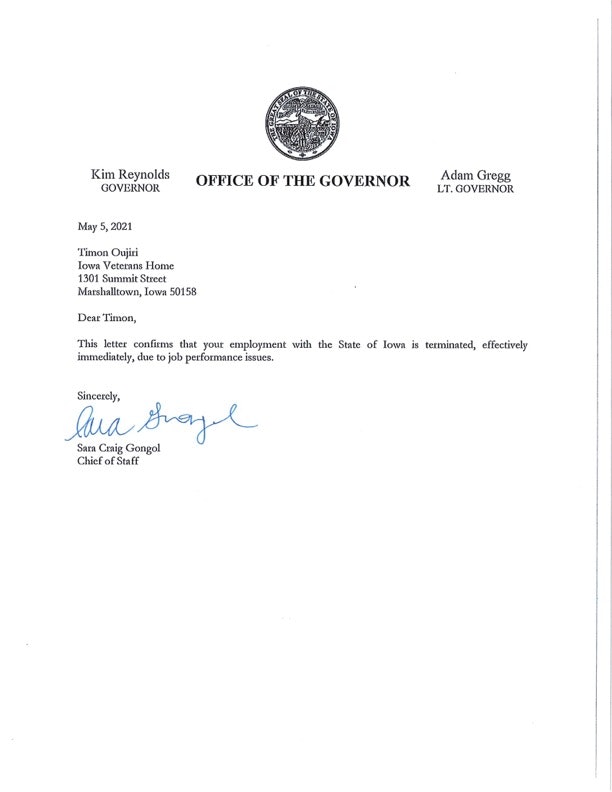 The letter does not mention specific concerns, which the governor’s staff brought to the attention of state auditors around the time Oujiri was fired. According to a special report State Auditor Rob Sand released in late July, the commandant had received $105,412.85 in excess pay since June 2019, including $90,027.20 of unauthorized gross wages. Oujiri’s attorney disputed some of the findings, saying the governor and her staff were aware of raises the veterans home leader had received.

Boal did not explain why it took more than three months to send a letter that could have been produced in minutes. The record also falls short of noting the “documented reasons or rationale” Oujiri was sacked.

Republican lawmakers and Governor Terry Branstad amended the open records law in 2017 to make the following information from personnel files a public record: “The fact that the individual resigned in lieu of termination, was discharged, or was demoted as the result of a disciplinary action, and the documented reasons and rationale for the resignation in lieu of termination, the discharge, or the demotion.”

In a 2018 advisory opinion, the Iowa Public Information Board determined that to comply with that part of the statute, government bodies should provide more than a generic description of the reason for employee discipline.

When used as a verb, “document” means to assemble the facts, substantiate, support, verify, demonstrate, justify, or validate, among other definitions. Therefore, a one word description of “work rules” or “performance” would not be sufficiently documented. A more descriptive phrase, such as “forged an employer’s signature on a government form” is better, but could be improved.

The public information board is charged with enforcing the state’s open meetings and open records laws, but its jurisdiction does not extend to the governor’s office. (A loophole for the governor’s office was the price of getting Branstad to sign the 2012 bill creating the board.)

Boal has yet to provide any material related to nine other records requests I have submitted since April 2020. In each case, I have followed up multiple times, sometimes copying Craig Gongol, Garrett, and/or Sam Langholz, who was Reynolds’ senior legal counsel until he joined the Iowa Attorney General’s office last November.