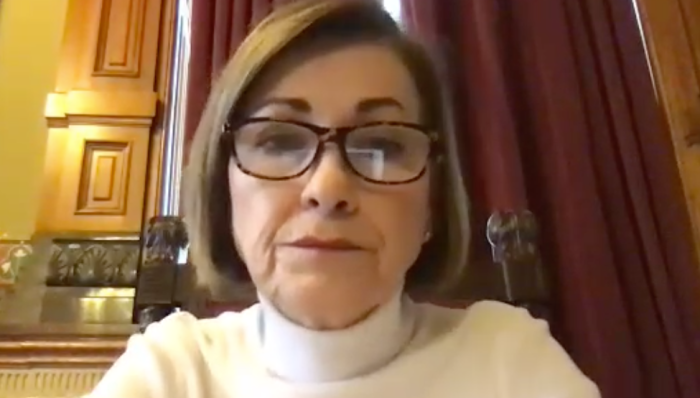 Governor Kim Reynolds promised early this year that she would have her staff respond "in a timely manner" to requests for public records.

Two and a half months later, the governor's office continues to delay action on numerous requests for documents subject to Iowa's open records law.

Iowa Code Chapter 22 does not set firm deadlines for providing records and allows for "Good-faith, reasonable delay" by officials who handle such requests for government bodies. I've sought records from the governor's office many times over the years. Prior to the COVID-19 pandemic, staff typically provided records within a month or two, even when the request produced hundreds of pages of documents.

Bleeding Heartland has six outstanding requests to the governor's office, submitted between April and December 2020. While some of those requests could involve a large amount of email correspondence, others were narrowly focused and should have required little staff time to compile and review.

Reporters for other news outlets have also had trouble obtaining records from the governor's office since last spring. Iowa Capitol Press Association president Erin Murphy asked Reynolds about the problem during a January 7 online forum. Would she pledge to instruct her staff to respond to public records requests in a more timely fashion? I pulled this clip from the Zoom recording of the Iowa Capitol Press Association's event.

Yeah, we're not concerned about that at all. We want to be transparent and open. We've just had a lot on our plate this year. So, you know, I'm not trying to make excuses, but everybody, we're working, I mean, working around the clock seven days a week.

But it is our intent to be open and transparent, and that means responding in a timely manner. So yeah, I have no issue with making that commitment.

The governor's official website lists senior legal counsel Michael Boal as the point of contact for open records requests. Between late 2018 (when Boal joined the governor's staff) and March 2020, I submitted more than a dozen requests to him and had no problems obtaining records within a reasonable time frame.

Several days after the governor's remarks to the Iowa Capitol Press Association, I followed up with Boal on my unfilled requests from 2020, copying the governor's chief of staff Sara Craig Gongol and communications director Pat Garrett. No one has sent any of the documents or indicated when I can expect to receive them.

State Representative Ras Smith confirmed on March 18 that he and State Representative Timi Brown-Powers still have not received records they requested from the governor's office in April 2020. In the aftermath of a huge COVID-19 outbreak at Tyson's Waterloo meatpacking plant, Smith and Brown-Powers (who represent parts of Waterloo in the Iowa House) sought correspondence that could shed light on communication between Tyson and the governor's staff.

In a wrongful termination lawsuit filed last year, former Iowa Department of Public Health employee Polly Carver-Kimm alleged that during the pandemic, the governor's office became involved for the first time in responding to records requests submitted to the public health agency. She also claimed Garrett had instructed her on one occasion to “hold” records already reviewed by the agency's legal counsel.

Documents I have received from other state agencies during the past year indicate that custodians often keep Garrett in the loop on records requests. Unlike the governor's office, though, those agencies have continued to comply with Iowa Code Chapter 22.

Worth noting: the Iowa Public Information Board, which enforces the open records and open meetings laws, can consider complaints about violations by most state entities but has no jurisdiction over the governor's office. (Legislators carved out that exemption to persuade then Governor Terry Branstad to sign the bill creating the public information board in 2012.) The only recourse for those seeking records from the governor's office is to sue in state court, which is prohibitively expensive for many citizens and news organizations.

Much of Bleeding Heartland's investigative reporting relies on public records requests. The current information blockade has not prevented me from uncovering some details about how the governor's office:

However, much remains to be learned about those decisions and more, if Reynolds keeps her promise to run an "open and transparent" operation, as required by Iowa law.