Republican leaders in the Iowa House and Senate declined this year to require face coverings, social distancing, or other COVID-19 mitigation practices in the state capitol. Governor Kim Reynolds and her staff have been spreading misinformation and casting doubt about whether masks reduce coronavirus transmission in schools.

But one branch of state government is following the recommendations of top scientists at the U.S. Centers for Disease Control.

Iowa Supreme Court Chief Justice Susan Christensen signed an order on August 27 stating that “All people entering court-controlled areas must wear a face covering,” even if they have been fully vaccinated for COVID-19.

The new Supreme Court order applies to courtrooms statewide, regardless of local test positivity rates. It cites updated CDC guidance “regarding mask wearing in public indoor settings in areas of substantial or high transmission,” which now includes every Iowa county. The new policy replaces an order Christensen issued in May, which allowed fully vaccinated people to go without face coverings in Iowa courtrooms.

When the CDC changed its recommendations in late July, based on evidence the Delta variant can be transmitted even by fully vaccinated people, Reynolds blasted the “Biden Administration’s new COVID-19 guidance,” which she described as “counterproductive to our vaccination efforts” and “not grounded in reality or common sense.” But her office declined to attack Christensen (a Reynolds appointee) in a statement provided to Associated Press reporter David Pitt.

Asked Friday why judges, juries and lawyers need such protection but not children and teachers, Reynolds’ spokesman, Pat Garrett, responded: “The state Supreme Court’s decision doesn’t change the legislation the governor signed into law. She believes wearing a mask should be a choice not a mandate.”

Garrett should be aware that House File 847, which Reynolds rushed to sign within hours of its passage in May, did not restrict the judicial branch’s authority to establish COVID-19 mitigation practices in court-controlled areas. To do so would have violated the separation of powers.

Christensen has generally been more cautious about reopening Iowa courtrooms than the governor was in reopening businesses during the first year of the pandemic. She doesn’t need to kowtow to Republican lawmakers who promote conspiracy theories about COVID-19 or denigrate common-sense safety practices. She is further insulated from political blowback because Iowans in all 99 counties voted to retain her in last year’s general election. The chief justice’s name won’t appear on a statewide ballot again until November 2028.

The Supreme Court justices are right to protect Iowans who have business in state court. Judges, attorneys, litigants, court employees, and jurors often spend hours in legal proceedings. Even original strains of COVID-19 spread easily through prolonged contact indoors, and the Delta variant is much more transmissible. Iowa’s vaccination rates are well below the level needed for “herd immunity,” and many smaller counties have particularly low vaccination rates.

Arguably the court should have reimposed a mask mandate sooner, as COVID-19 cases and hospitalizations rose sharply in the weeks after the CDC revised its guidance. But better late than never.

Final note: the August 27 order does not apply to areas of county courthouses that are not part of the judicial branch, such as county government offices. Officials in several large counties (Polk, Linn, Johnson, Story) have recently reimposed mask mandates in government buildings, but those policies are not in place in most parts of Iowa.

Full text of August 27 order from the Iowa Supreme Court: 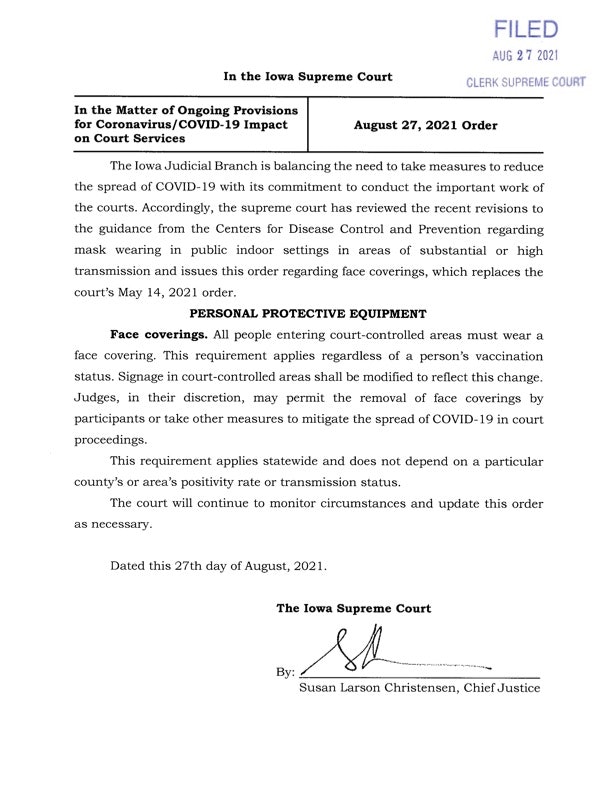