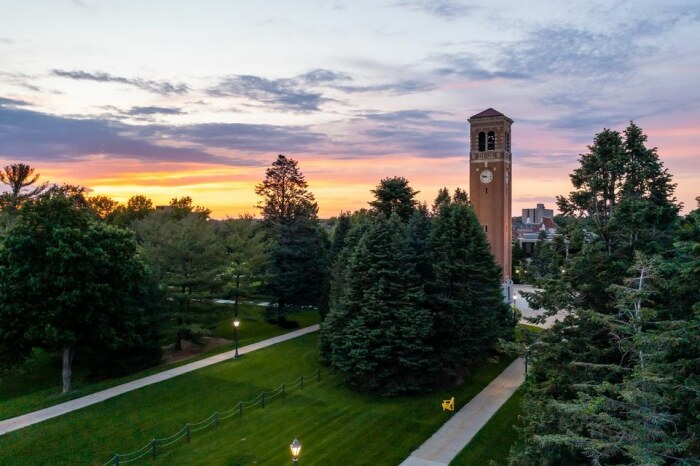 The University of Northern Iowa is keen to move beyond the controversy over its decision to discipline a biology professor who insisted that students wear masks in his class. The university announced on October 6 that it had "reached an agreement" with Professor Steve O'Kane after "listening to the concerns and working closely with all parties involved." O'Kane will teach an advanced plant systematics course online, and another faculty member will take over the classroom teaching, where participants won't have to cover their noses and mouths.

The written statement asserted, "UNI continues to support the rights of all our faculty, staff and students and is pleased to have reached a resolution that protects all of those involved."

O'Kane and his students don't feel their interests were protected.

O'Kane described the arrangement in more detail with Vanessa Miller of the Cedar Rapids Gazette. He'll handle the Tuesday lectures online, and Associate Professor Julie Kang will supervise the lab work on Thursdays. But Kang is already teaching a class that overlaps with the scheduled labs. So instead of using the material he would normally present between 12:30 pm and 3:20 pm, O'Kane will have to select lab work that can be completed in less than an hour and a half.

He told Miller "no one with the Board of Regents or upper UNI administration has reached out to connect with him about the situation." He remains unhappy his students are being punished over his refusal to teach an in-person class without a mask mandate.

“I hope that people don't feel that, ‘Aha, this whole situation is now resolved,’ when it's not in any way, shape, or form,” he said.

O’Kane said he’s still upset faculty can’t require masks in class; that professor Kang is having to take on extra work; that he needs to jump through new hoops to facilitate a working lab experience; and that his students still are being shorted.

“I’m sad that my students aren’t going to get as rich as experience as they would normally,” he said.

I sought clarification on whether UNI will impose the previously announced discipline: will O'Kane receive a "needs improvement" evaluation and therefore be ineligible for merit pay this year?

United Faculty, the union that represents UNI's faculty, previously vowed to fight what it called a "disproportionate, unnecessarily disruptive, political show of force" against O'Kane. The local's vice president Christopher Martin told me on October 7,

[T]he disciplining of a professor in this manner completely undermines the stated purpose of UNI’s faculty evaluation system, which requires that the evaluations abide by the established departmental standards and criteria document, which were developed in the spirit of shared governance. The effect is that the administration now acts as if it can ignore all established procedures and due process, and arbitrarily discipline faculty any way they wish.

Martin added, "Ironically, the most disruptive thing in the whole matter has been removing a beloved professor from his classroom over a matter that was not an issue for him or his students."

The students aren't letting this go.

"OUR QUALITY OF EDUCATION HAS NOW BEEN TAKEN AWAY"

UNI's student government passed a resolution on October 6 condemning how the university and Iowa Board of Regents handled O'Kane's decision to require masks in class. It noted the consequences punished students who didn't violate any policies. Those students had been "promised a top quality education," and had enrolled in a "highly specialized course" which O'Kane was "regarded to be the only qualified individual to teach." UNI's actions created stress for all the students and jeopardized the futures of those who needed the class to graduate this semester.

O'Kane's students aren't happy to have another professor supervising their labs. Aaron Boies released a written statement on October 7 on behalf of his classmates (enclosed below). The students want a full or partial refund for the course and for pass/fail grades to be given. They are also asking for a written explanation of what happened, including "the names of specific individuals that are directly responsible for these actions upon our class."

In addition, the students want restrictions on O'Kane to be removed, and for UNI to allow professors "to uphold their own reasonable rules and expectations for their students to follow in the classroom." According to their statement, they've experienced "unnecessary stress and anxiety," and in some cases depression. "We all joined this class intending to learn about plants directly from Dr. O’Kane and we feel our quality of education has now been taken away despite course revision."

The statement concludes by expressing concern

that politics and special interests upheld by the Iowa Board of Regents and their acting superior are involved in the actions taken against our class. The safety and health of students and faculty is not considered by the Board policy. The policy is politically motivated and has obviously failed us as students and as a university community.

Asked whether the university will refund part of the students' tuition or meet any of their other demands, the Board of Regents' communications director Josh Lehman didn't respond. Schmadeke replied on behalf of the university, "UNI will listen to any concerns students may have and provide an appropriate response. We cannot comment further at this time."

It's hard to see how anyone benefited from this episode, other than administrators who showed their governing board and Republican politicians that they are willing to disrupt the lives of UNI faculty and students in order to make a political statement about masks.

After listening to the concerns and working closely with all parties involved, the University of Northern Iowa has reached an agreement with a faculty member to continue teaching his course.

Board and university policy has not changed and masks will not be mandated in the class. Biology Professor Steve O’Kane will instead teach his Plant Systematics course and lab online. Another high-qualified professor will handle other classroom duties.

UNI continues to support the rights of all our faculty, staff and students and is pleased to have reached a resolution that protects all of those involved.

As noted in previous statements from the university, under Board of Regents directives, neither the university nor faculty members can mandate that face coverings be worn on campus, including in classrooms. An exception to this is in limited spaces where masks are required, such as a healthcare or campus childcare setting or service. 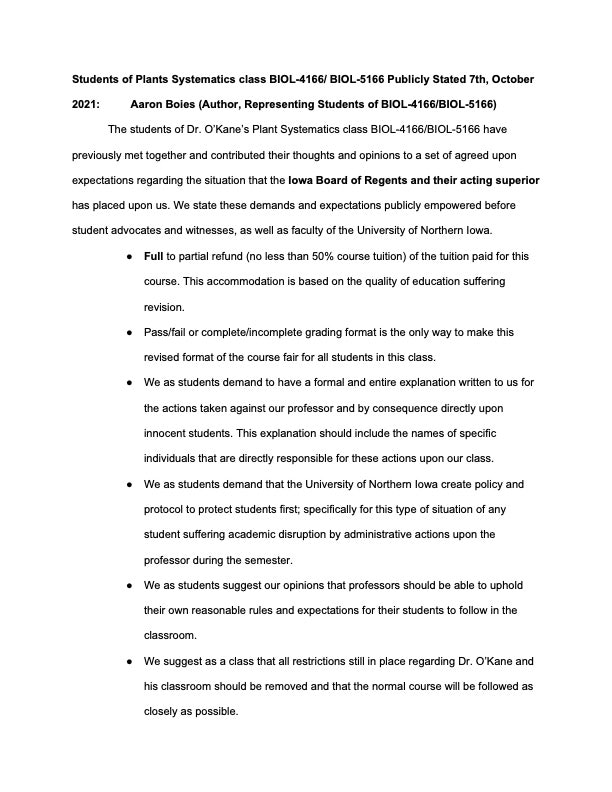 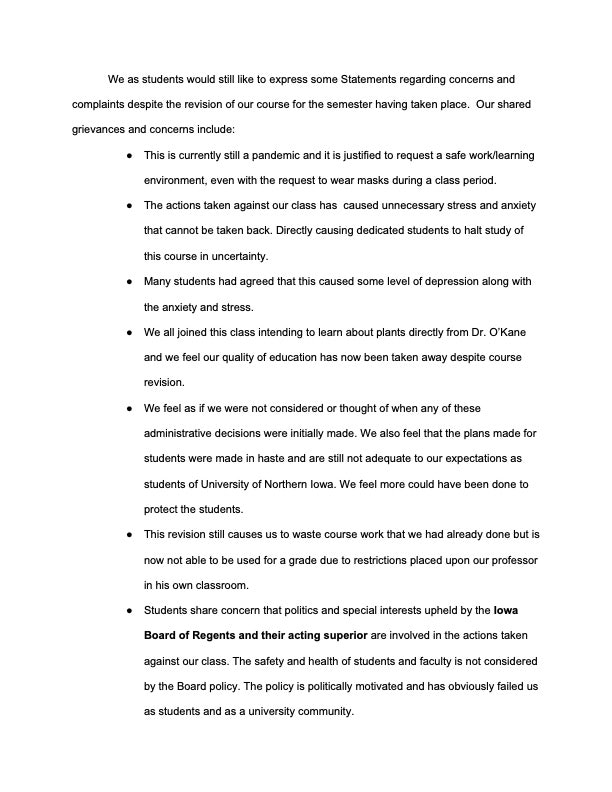 Top photo of the UNI campus originally published on the university's Facebook page.