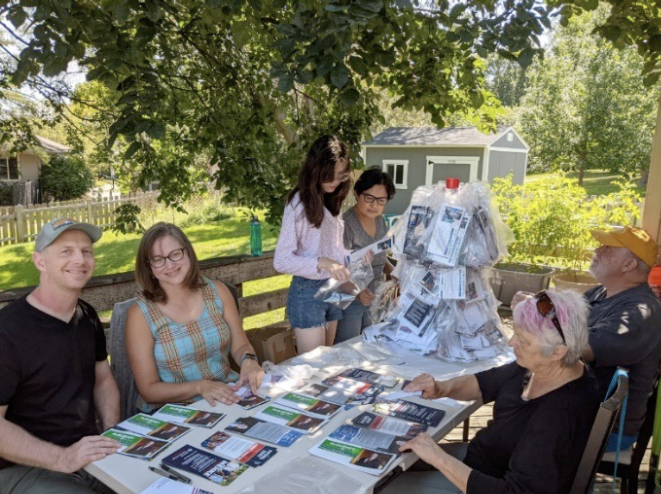 Going into the 2019 elections, Urbandale's city council consisted of five Republican men with backgrounds in legal or real estate work. This suburb to the west of Des Moines was a GOP stronghold for decades. But Matt Blake and Bridget Carberry Montgomery won two of the three council seats on the ballot two years ago. On November 2, Amy Croll and Larry McBurney won the Urbandale city council races with 5,044 votes and 4,207 votes, respectively. Once they are sworn in, four Democrats and one Republican will serve on the council of Iowa's twelfth-largest city (around 45,000 residents). Democrats Jason Menke and Rachel Kent won two of the three Urbandale school board seats on this year's ballot.

Urbandale's longtime Mayor Bob Andeweg (who was unchallenged for re-election this year) is a Democrat these days, having changed his registration in 2019.

Many suburbs around the country have undergone political transformations as their populations diversify, and college graduates increasingly favor Democrats. But winning a local election in a purple area still requires hard work. McBurney finished just 27 votes ahead of the third-place candidate, Republican John Bouslog.

When I reached out to Croll and McBurney this week, both credited the grassroots effort for their wins. McBurney noted, "27 votes means that every door mattered." Carberry Montgomery agreed, "the bottom line was organization" in each of the last two cycles. Blake estimated that volunteers helped his campaign knock nearly three times as many doors in 2019 as he could have managed on his own.

The late Jerry Tormey was among the most influential activists who helped change Urbandale. Two other superstar volunteers, Donna Richard-Langer and Dave Langer, agreed to a telephone interview on November 4 to discuss their methods.

The Langers have lived in Urbandale for more than 35 years. They always voted for Democrats but felt compelled to become more involved in politics after Donald Trump was elected president. During 2018, they learned about get-out-the-vote operations by working with the Iowa Democratic Party's "coordinated campaign." They adapted some of those techniques.

The Langers' home has been a staging area for canvassing, phone banks, and postcard writing. One thing they changed in 2019 was recruiting volunteers who lived in the three Urbandale precincts that are in Dallas County. Previous GOTV had focused on the eleven Urbandale precincts located in Polk County.

Dave and Donna didn't want to speak on the record about some details, like how they organized the turf or which voters they targeted for the various kinds of outreach. They estimated that around 200 volunteers helped during the 2020 election cycle. Due to the COVID-19 pandemic, they focused more on postcards and phone calls than door knocking last year. However, they organized no-contact "door bags" by leaving literature at targeted homes.

Here's Donna and Dave in 2020, with a woman holding an absentee ballot to be returned. (Iowa Republican legislators outlawed this kind of "ballot chase" operation in 2021.) 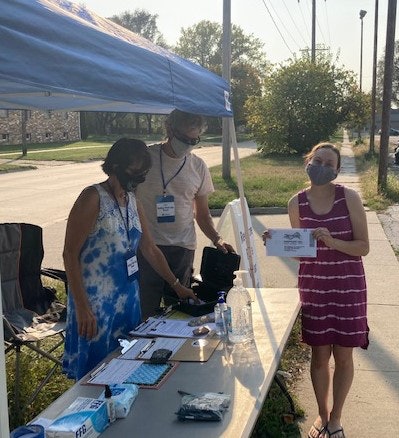 Registering new voters has been a priority for the Urbandale Democrats as well. Here's Dave (second from left) and Donna (second from right) with U.S. Representative Cindy Axne at a voter registration station in 2020. Axne's strong showing in the Des Moines suburbs carried her to victory against Republican David Young in the third Congressional district. 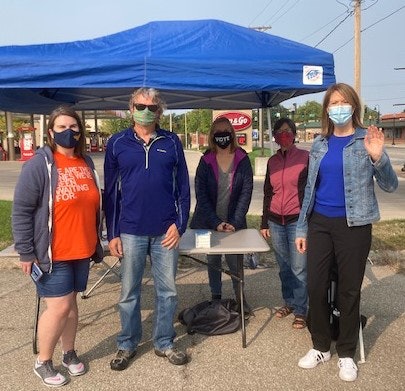 The number of volunteers dropped off somewhat this year, as expected. Nevertheless, Donna said around 120 people helped support Urbandale's city council or school board candidates in some way. They encouraged early voting, either by mail or in person at a satellite voting site inside the Urbandale Public Library.

Personal contact remains a central element of voter mobilization. Here are boxes of packets prepared by Rob Davis, who distributed them among other volunteers. 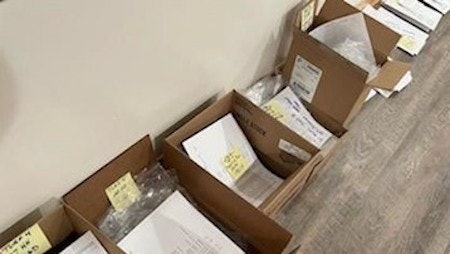 Bags of campaign literature, ready to be hung on doorknobs. 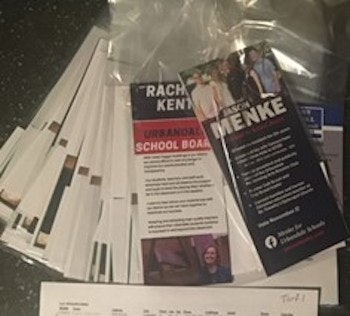 Those bags don't pack themselves. Here are volunteers assembling the packets and organizing the bags by precinct. (Some areas of Urbandale feed into the Waukee, Johnston, or West Des Moines school districts.) 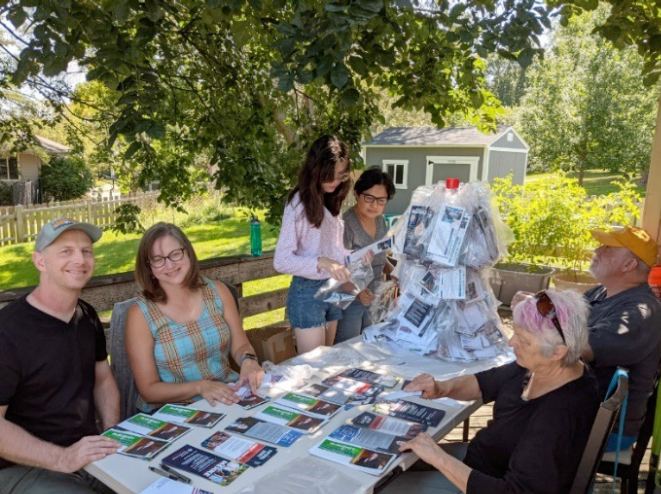 Although Donna and Dave didn't want to share all their GOTV secrets with the whole world, they are happy to advise other Democrats on how to replicate this model in their own communities. They can be reached by email at drldkl AT msn.com or by phone at 515-210-6449.

All photos provided by Donna and Dave Langer, published with permission.