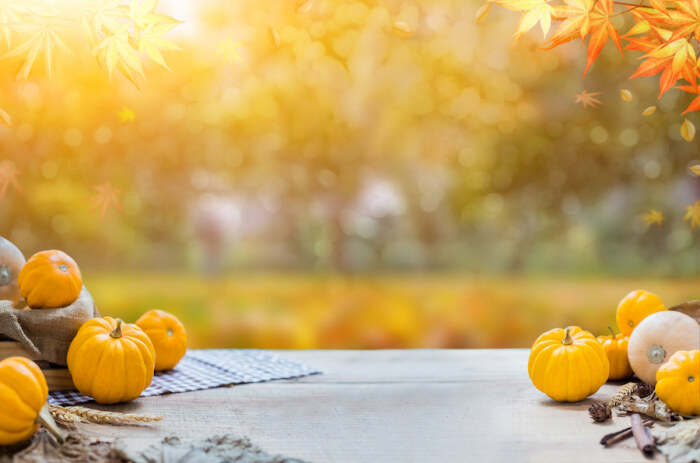 Sometime during the fall of 1621, white European settlers at Plymouth held a harvest feast, attended by some Wampanoag, one of the Indigenous peoples living in the area. Almost everything else you learned about that "first Thanksgiving" was wrong.

The Pilgrims didn't invite the Wampanoag to share their bounty. Some historians now believe the Native men came because they heard gunshots and assumed the settlement was under attack. (They had formed an alliance with the European settlers in the spring of 1621.) Another theory is that the warriors showed up "as a reminder that they controlled the land the Pilgrims were staying on and they vastly outnumbered their new European neighbors."

According to Thanksgiving myths, the Pilgrims expressed gratitude for Wampanoag who taught them how to grow or find food in their new surroundings. In reality, "Their role in helping the Pilgrims survive by sharing resources and wisdom went unacknowledged that day, according to accounts of the toasts given by Pilgrim leaders."

Historian David Silverman, author of This Land Is Their Land: The Wampanoag Indians, Plymouth Colony and the Troubled History of Thanksgiving, sees the mythology around the Plymouth settlement as an appealing narrative for white Americans. Eryn Dion reported for USA Today in November 2020,

As Americans looked for an origin story that wasn’t soaked in the blood of Native Americans or built on the backs of slavery, the humble, bloodless story of the 102 Pilgrims forging a path in the New World in search of religious freedom was just what they needed, according to Silverman. Regardless of whether it was rooted in historical fact, it became accepted as such.

Within a few generations of the 1621 feast, European settlers had mostly exterminated the Indigenous cultures of New England by killing, displacing, or enslaving the vast majority of Native Americans who had been living there. For that reason, Native people have gathered near Plymouth for a National Day of Mourning on every Thanksgiving Day since 1970.

Few American children learn anything about Native American history or culture beyond legends about Thanksgiving, Pocahontas, or Sacagawea. They may be encouraged to wear stereotypical "Indian" clothing for special school events; Learning for Justice describes that practice as "a false narrative that relegates Indigenous peoples to the past and turns real human beings into costumes for a few days a year."

Nadra Nittle reported this week for The 19th on "advocates pushing for lessons on Native traditions and cultures to be integrated into the mainstream school curriculum" in California and some other states. I would welcome such a movement in Iowa. But our Republican-controlled legislature would never agree to expand material that doesn't center the white American experience. This year, they thundered against a one-week Black Lives Matter curriculum in Ames and banned certain concepts about systemic racism or sexism in mandatory diversity trainings statewide.

Some influential Iowa Republican lawmakers now want to prosecute teachers and librarians who make "obscene" books available to students. Wouldn't you know, one of their top targets is a book by a Native American author whose main character is growing up on an Indian reservation.

If Iowans want to get vulgar, offensive material out of schools, they could start by ditching mascots and team names that appropriate Indigenous themes.

The Mason City school board voted unanimously this month to drop the name "Mohawks" from school athletic teams, a move requested by Mohawk tribes and other Native advocates. Abby Koch reported for the Mason City Globe-Gazette on November 15,

Effective immediately, the district will stop the use of "Mohawks" to introduce athletic teams, which will now be referred to simply as "Mason City," and the name and associated imagery will be absent from any new merchandise produced, such as shirts or hats, and will be scrubbed from the district website and all electronic communications as well. However, the school colors will remain red and black. [...]

Rev. Le Anne Clausen de Montes, who was in favor of the name change, cited multiple organizations and tribes who have asked for the end of Native American mascots. She added that she hoped her own children, who are Indigenous according to de Montes, would be able to participate in school without racial stereotypes surrounding them.

"(Native Americans) are not extinct, fictional or trapped in history. They do not want to be dismissed as noble savages," said de Montes. "We now know and we must speak the truth that contrary to a popular folklore story, we never had tribal permission to use these names or symbols."

Some Iowa school districts have kept team names like "Warriors" but removed imagery such as spears and feathers from their logos. Others insist critics misunderstand their mascots. Candidates who won Indianola school board seats in the latest election favor keeping the "Indians" team name and "dreamcatcher" logo.

In October, leaders of the Sac and Fox Tribe of the Mississippi in Iowa (Meskwaki Nation), the Ponca Tribe of Nebraska, the National Congress of American Indians, and American Indian Council wrote an open letter to Iowa school district leaders urging "the 66 K-12 schools in the state of Iowa with Native “themed” school mascots – to retire your mascots." Excerpt:

The National Congress of American Indians (NCAI), as the oldest, largest, and most representative national organization representing Tribal Nations and their citizens, has been leading Indian Country’s consensus-driven movement to eradicate offensive Native “themed” mascots from sports and popular culture for more than 50 years. NCAI’s resolutions – which present the unified voice of hundreds of Tribal Nations – have consistently conveyed Indian Country’s clear desire to see these mascots retired so that the schools our children attend may provide an inclusive, equitable, and supportive learning environment for all students.

Critically, the formal position of the Sac and Fox Tribe of the Mississippi in Iowa (Meskwaki Nation), the only federally recognized Tribal Nation in the state, is categorically “against the use of Native American terms or images or symbols for sports or other marketing uses.” Additionally, other federally recognized Tribal Nations – including the Ponca Tribe of Nebraska – with ties to the state of Iowa have taken similar positions against the use of Native American names, imagery, symbols, and customs as school mascots. So, too, have key Native organizations that serve Native people residing in the state, including the Iowa Commission on Native American Affairs.

As the Meskwaki Nation has publicly addressed, if supporters of these mascots look hard enough, they will be able to find individuals who support their cause. However, when taken as a whole, the will of Indian Country is clear – Native “themed” mascots and the dehumanizing stereotypes they perpetuate must go. Out of respect for tribal sovereignty, we ask that you heed the voices of tribal leaders representing hundreds of Tribal Nations and the organizations that serve their citizens – not the voices of a few select individuals – when seeking to understand where Indian Country broadly stands on this issue.

To that end, we invite you to begin a dialogue with us so you can learn about contemporary Tribal Nations and peoples and why these mascots degrade us, misrepresent who we are, and dismiss the many important contributions we have made – and continue to make – to this great country. Moreover, know that we are committed to working with you to expand and strengthen the curriculum your schools teach future generations of Iowans about Tribal Nations and peoples, particularly the undersigned Nations.

Eugene E. Fracek, an enrolled member of the Dakota Tribe who teaches a course on American Indians at Simpson College, wrote in a guest commentary for the Des Moines Register in September,

Everything around these appropriated mascots has a foundation in institutionalized racism — which refers to having the power to carry out prejudice. [...]

The dominant/non-Indian society uses selective images to reflect the dominant society expectation or romanticized notion of who “Indian” people are or, more correctly, were. These images range from stereotypes to caricatures. [...]

The appropriation, use, misuse, and abuse of Tribal cultural items, often out of context, continues. Headdresses and clothing items, face paint, terms such as “warrior” and “chief,” practices including stereotyped dance steps, whooping, and drumming), and arbitrary symbols such as the “tomahawk chop” create a sense of history and romance. [...]

The dominant society has chosen to remember the romanticized image of “Indian” people they have created. This representation includes appropriated “Indian” symbols, behaviors, dress, or beliefs. Most Americans have no idea why an image was chosen for a particular team. Most Americans could not correctly name five of the 300 Tribes that exist in America today. There is no honor when no one knows why an image was chosen nor why it is incorrectly and stereotypically used as it is today.

Anyone who thinks critics are too sensitive, or that long-used team names are harmless, should read Zack Stanton's 2020 interview with Stephanie Fryberg in Politico magazine.

A professor at the University of Michigan and member of the Tulalip Tribe, Fryberg has spent years studying the psychological effects of Native stereotypes and logos on both Native Americans and non-Natives. She’s seen precisely who gets hurt.

In her studies, she found that exposing Native American teenagers to Native sports mascots decreased their self-esteem, lowered the achievement-related goals they set for themselves, and diminished both their sense of community worth and belief that their community can improve itself. Other studies have shown that the use of Native mascots increases suicidal ideation and depression among Native Americans. “Being shown the mascot actually lowered Native high schoolers’ self-esteem more than giving them negative statistics about [Native American communities], like high suicide rates, depression, dropout rates,” Fryberg told POLITICO in an interview on Wednesday. “That really gives you a sense of how powerful the imagery is.” [...]

There are also effects on intergroup relations — how Native people engage with non-Natives. The research shows that the use of Indian mascots increased stereotyping of Native people as “primitive,” “aggressive” — “savages.” It leads people to dehumanize Native people. And there is also evidence that when exposed to Native mascots, white college students are more likely to discriminate against other people of color. The only benefit to using Natives as mascots is that we have research showing that whites get a boost in self-esteem.

Fryberg told Stanton, "So many of these examples of 'playing Indians' are about allowing non-Natives to feel good. It’s the same with Thanksgiving. It’s the same story with Columbus Day. It’s the same piece in terms of how history books are written. At some point, if you really want to honor Native people, learn the truth. We were — and are — still here."

Dropping dehumanizing team names and correcting the record about a harvest meal in 1621 won't undo centuries of maltreatment of people who were living on this continent long before Europeans arrived. But those small steps would acknowledge the majority needs to stop erasing Indigenous voices from our national and local conversations.