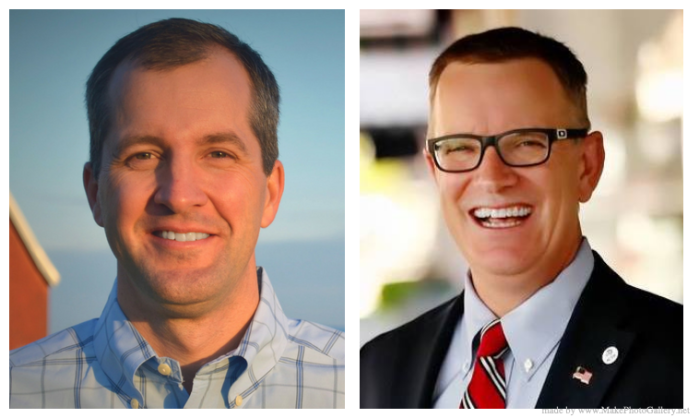 Iowa Secretary of Agriculture Mike Naig announced on December 7 that he will seek a second full term in 2022. No Democrats have declared for this race, but Polk County Soil and Water Commissioner John Norwood confirmed to Bleeding Heartland that he is seriously considering it.

"FOCUSED ON THE FUTURE OF AGRICULTURE"

Appointed by Governor Kim Reynolds to the office in March 2018, Naig won the nomination for secretary of agriculture on the fourth ballot at the GOP state convention a few months later. He won the general election with 50.4 percent of the vote, while Democrat Tim Gannon received 46.6 percent and Libertarian Rick Stewart 3.0 percent.

Naig shared the news about his re-election plans through a video posted on social media, which emphasized his values of "strong faith, hard work, and community."

Harvest is wrapping up and Iowa farmers know that when one job is done, it's time to focus on the next.

The incumbent's campaign website previews the case he will make to Iowa voters: he is "focused on the future of agriculture" and "dedicated to providing leadership for all aspects of agriculture in Iowa, ensuring consumer protection, and promoting the responsible use of our natural resources." Naig promises to advocate for "expanding opportunities for Iowa's livestock producers, crop farmers, and agribusiness," through "a robust renewable fuels market" and "policies that will continue to open new markets for Iowa's farmers."

Agribusiness has long been a major source of support for Naig. The Iowa Farm Bureau Federation orchestrated a corporate-funded television, radio, and digital advertising campaign on Naig's behalf shortly before the 2018 election.

The following claim will amuse members of Iowa's environmental community:

Secretary Naig is an advocate for healthy soil and water. Naig led the implementation of the Iowa Nutrient Reduction Strategy and will pursue new public-private partnership to continue building momentum on water quality.

I don't know what "momentum" Naig is talking about, since Iowa's all-voluntary approach hasn't improved water quality by any reasonable standard. Conventional farming practices are the biggest factors in nutrient-related problems.

The incumbent also says he "believes we need to inspire and engage young people to pursue rewarding careers in agriculture."

John Norwood was elected to the Polk County Soil and Water Commission in 2018. His day job is running the consulting firm he established, TBL Ventures. Bleeding Heartland readers may recognize his name because of the guest commentaries he has published here. The most-viewed one was inspired by Naig's appearance on "Iowa Press" in April 2021: "Mike Naig interview: Wishful thinking from Iowa's last Kodak salesman."

In October, he discussed Iowa's water supply and agricultural runoff on a panel organized by the Cedar Rapids Gazette as part of its "Iowa Ideas" conference.

I've known John since before this website existed and consider him a friend. I asked him this week about a possible candidacy for secretary of agriculture. He replied via email on December 8,

Yes, I am seriously considering a run and all that would take in terms of time, talent, treasure and teamwork. The support of my friends, colleagues and family. Mike Naig is a likable opponent with a lot of friends in high places and with deep pockets.

Before deciding whether to proceed, Norwood wants to hear "what Iowans are thinking and feeling, rural and urban, farm operators, ag landowners, stakeholders from around the state about the current state of our state and the sturdiness of our foundational agricultural system."

Ours is one of the most productive in the world but it wasn’t designed with resiliency and adaption in mind, which is what I’m seeing we need to work on now in a serious way. In addition, the present system doesn’t support Iowa communities. Something like seventy of our counties are losing population, another ten are flatlined.

The current commodity system isn’t designed to create new jobs or support communities as it scales. We need to create new opportunities in our rural communities that build on national trends in plant based diets, regenerative foods, niche products, and indoor and/or extended farming. California grows 90 percent of our fruits and vegetables. Can Iowa leverage into these markets with an indoor or hybrid indoor/outdoor approach?

This week, Norwood spent two days in Riverside at Mitchell Hora’s “Big Soil Health Event,” where he listened "to some of the leading regenerative schooled farmers from around the Midwest."

Regenerative ag is coming along with billions to trillions in consumer facing carbon dollars that could help support the transition to more sustainable practices and strategies. Can we put this money to work productively, or will it bypass Iowa or be frittered away?

Soil health is an important key to flood control, water quality, nutrient density, producer resiliency. The other week I participated in our annual ISU drainage research conference where our groundbreaking Polk County executed - Polk SWCD conceived saturated buffer blitz was featured going from one conservation infrastructure install at a time to dozens to a pilot with a hundred saturated buffers planned next year. The Iowa Drainage Coalitions Keegan Kult described our collective work in great detail.

The Central Iowa Water Quality Infrastructure Project launched in June; Norwood published his remarks about this "new vision for Iowa agriculture and Iowans" here. He told me today,

In our case, ag landowners are paid to do these installs and the costs of installation are streamlined and covered 100 percent. Since we have more than 3,000 drainage districts in our state which drain some 7 million acres of land, we need to be working with our rural counties and farm groups on how we can manage water for farm and off-farm needs. Not just drain it away.

Neither name calling, nor lawsuits, nor mandates will move the needle as quickly as aligning people and money around a new vision for Iowa agriculture. We need to be thinking in systems, teams and aligning our money and resources to build a system -- the envy of the modern world -- that can last for 100 generations and delivers through all weather conditions. Iowans can do this if there’s will, financial support and commitment.

Whether or not he runs for secretary of agriculture, Norwood added, "let’s get educated and figure out a smart path forward because our current system is out-of-balance."

Our system is so big – 23 million acres of corn and beans and 50 million hogs per year – we need to look at systems-based changes. This is what I’ve been doing as a soil and water commissioner, representing 400,000 residents of our capital county. We can’t continue to flush our soils and nutrients down to the gulf at 10 times the rate Mother Nature makes soil and expect to have anything left in a hundred years. A third of our topsoil is already gone in some places. Our reservoirs are being filled with sediment from fields that lack cover. And the story continues. How will it end?