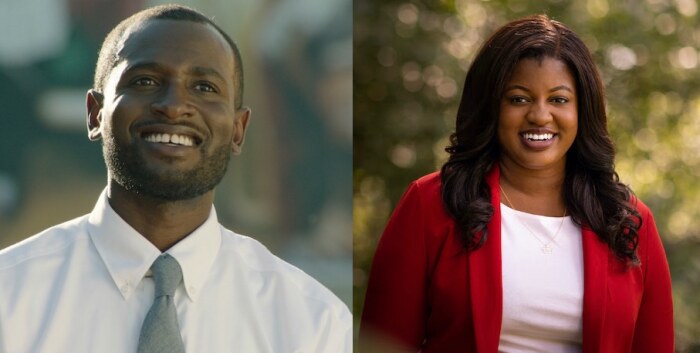 Where things stand in the Iowa Democratic race for governor

Since State Auditor Rob Sand ruled out running for governor earlier this month, I've been meaning to catch up on the Democratic candidates who have been actively campaigning against Kim Reynolds: State Representative Ras Smith and Deidre DeJear, the 2018 nominee for secretary of state.

The field may not be set; many Democrats believe at least one other candidate will join the governor's race early next year. Recent speculation has centered around State Representative Chris Hall. The six-term Iowa House Democrat from Sioux City, who is ranking member on the House Appropriations Committee, has not announced whether he will seek re-election or run for higher office in 2022. Hall declined to comment for the record when I reached out to him shortly after Sand confirmed he'll run for state auditor again.

This post will focus on bases of support for Smith and DeJear. We'll know more about their capacity to run a strong statewide campaign after candidates disclose how much they've raised and spent this year. Those reports must be filed with the Iowa Ethics and Campaign Disclosure Board by January 19.

Bleeding Heartland is unlikely to endorse any candidate before the primary, but I welcome guest commentaries advocating for any Democratic contenders. Those wanting to learn more about the options should tune in to the Iowa Unity Coalition's gubernatorial candidate forum on January 22 in Des Moines; both Smith and DeJear have agreed to participate.

Many Democratic activists are supporting each of the declared candidates. The best-known of Smith's endorsers are five of his Iowa House colleagues: Timi Brown-Powers, Dave Williams, Charlie McConkey, Amy Nielsen, and most recently Ruth Ann Gaines.

As ranking member of the House Education Committee, Smith has highlighted the problems affecting Iowa's public schools and released a blueprint for reversing those trends. The Iowa State Education Association's past president Tammy Wawro is among the teachers publicly supporting his campaign.

Smith was a vocal supporter of John Deere workers during the recent strike and often mentioned that his father was a United Auto Workers member employed by Deere in Waterloo. Long before he formally announced his candidacy for governor in June, Smith highlighted proposals to support working families, which he dubbed the Iowa Workers Bill of Rights.

I'm not aware of any labor union endorsements for Smith, but well-known individual supporters in the labor movement include United Auto Workers Local 838 past president Tom Ralston and Randy Bryce, a former Congressional candidate from Wisconsin who created a PAC to support pro-labor, working-class candidates.

Several experienced campaign hands are on board as well. Jesse Harris was the Iowa Democratic Party coordinated campaign director in 2008 and was a senior adviser to Joe Biden's campaign before the Iowa caucuses and during the 2020 general election campaign. Julie Stauch has worked for numerous Democratic candidates in Iowa and other states.

On December 20, former U.S. Representative Dave Loebsack became the first former member of Congress to endorse a 2022 candidate for governor, citing DeJear's "proven track record of putting in the work to make change for all communities across our great state," and "bringing people together to solve challenges, finding solutions through seeking common ground."

DeJear has also been endorsed by three political action committees: Fund Her, Higher Heights for America, and most recently EMILY's List, which announced its support on December 17. The PAC endorsements open nationwide networks of donors to DeJear, which should give her a fundraising boost before the end of the year.

Perhaps more important, EMILY's List is among the biggest spenders in Democratic primaries. The group's affiliated super-PAC Women Vote! spent $264,134 supporting Cindy Axne in the 2018 primary for Iowa's third Congressional district, according to data compiled by the Center for Responsive Politics’ OpenSecrets website. Before the 2020 primary for U.S. Senate, Women Vote! spent $919,202 on negative advertising about Mike Franken, who was the leading Democratic rival to EMILY’s List endorsed candidate Theresa Greenfield.

There's no guarantee the PAC will make independent expenditures on the governor's race. But EMILY's List said last April that Reynolds was among nine Republican governors the group would try to defeat next year. If the PAC spends heavily on DeJear's behalf in the coming months, that would give her a significant advantage over Smith in a two-way race.

The prospect could also deter a new candidate from joining the field, since that person would have at most five months to raise money before the June primary.

BOTH CANDIDATES HAVE CALLED FOR MORE TRANSPARENCY

Since Bleeding Heartland and other news organizations sued the governor over her open records violations, both candidates have emphasized the need for more transparency in the governor's office.

Smith's campaign highlighted the lawsuit in a December 18 fundraising email with the subject line "Kim Reynolds thinks the law doesn't apply to her." Excerpt:

Three top journalists, joined by the ACLU, are suing Reynolds for failing to comply with open records law. A group of state legislators and I tried holding her accountable for openly flouting these laws for nearly two years and while they may feel obscure -- they're actually a critical part of holding our elected officials accountable.

It begs the question: What is she hiding and why?

In a written statement released on December 21, DeJear said, "It has been discouraging to witness Gov. Reynolds ignore public records requests and avoid public feedback during public meetings." She added, "Transparency in government is crucial to maintaining trust with the public. Iowans deserve leaders that will be open about the process of government, from how the budget priorities are determined to taking public records requests seriously."

Smith has direct personal experience with Reynolds' stonewalling. He and Brown-Powers requested records from the governor's office in April 2020 related to the COVID-19 pandemic and communications with Tyson executives. They have yet to receive any of those records, I confirmed this past weekend.

When the Iowa House debated the appropriations bill that contains the governor's office budget in April, Smith tried to link state funding to compliance with the open records law. His proposal would have required the governor's office to respond to public records requests within 20 calendar days, and would have held back state funds if Reynolds' office did not fulfill all pending records requests by the beginning of the 2022 fiscal year (July 1, 2021). Here's Smith introducing the amendment:

Shortly after Smith's remarks, House Speaker Pat Grassley ruled the amendment not germane to the appropriations bill that funded the governor's office. Republicans then voted down Smith's motion to suspend the rules to allow consideration of the amendment.

UPDATE: Cedar Rapids Gazette columnist Todd Dorman interviewed Smith and DeJear about challenges facing their campaigns and why they think Reynolds is beatable.

Smith reflected on his highs and lows and posed tough questions for Iowa Democrats in a commentary for this website.