Ten-term incumbent Miller is the longest-serving state attorney general in U.S. history. He has survived three Republican landslides: 1994, 2010, and 2014.

His 2010 opponent was Bird, then known by her maiden name, Brenna Findley. The race wasn’t expected to be competitive; Republicans had rarely seriously challenged Miller and did not field a candidate against him in 2006.

But gubernatorial candidate Terry Branstad was very invested in Findley, talking her up at every campaign appearance and during an “Iowa Press” program that was supposed to be about his own race. He appeared in one of her television commercials as well.

The Republican Party of Iowa transferred more than half a million dollars to Findley’s campaign, allowing her to outspend Miller on radio and television. Not only did Findley place her own ads, she benefited from a dark money group’s attack ads against Miller.

The results were disappointing for Republicans. While Branstad defeated Governor Chet Culver by more than 9 points, and Republicans made large gains in the Iowa House and Senate, thanks to much higher GOP than Democratic turnout, Miller was easily re-elected. He received 607,779 votes to 486,057 for Findley (55.5 percent to 44.4 percent).

Four years later, Republicans didn’t make a major play for the office. Attorney General candidate Adam Gregg raised a respectable amount of money and campaigned in all 99 counties, but received no significant outside help from Branstad or the Iowa GOP. The Republican turnout advantage in the 2014 midterms was about the same as in 2010; Branstad was re-elected by more than 20 points and Joni Ernst easily won the U.S. Senate race. But Miller won another term with little trouble: 616,711 votes to 481,046 for Gregg (56.1 percent to 43.8 percent).

Republicans didn’t even nominate an attorney general candidate in 2018.

Iowa’s shifted to the right over the past decade, and Bird is not the same candidate who ran against Miller in 2010. At that time, she had little experience in the practice of law, having recently worked as chief of staff for U.S. Representative Steve King, and before that as a staffer for Iowa legislative Republicans.

Her resume is stronger after spending four years as Branstad’s legal counsel and five as a county attorney. She became Fremont County attorney in 2016 and was elected to the same office in Guthrie County in 2018. She’s now president-elect of the Iowa County Attorneys Association, according to her campaign website.

Given Miller’s proven ability to outperform the top of the Democratic ticket, Bird will nationalize this race as much as possible.

RUNNING AGAINST THE “AUTHORITARIAN BIDEN ADMINISTRATION”

In the news release announcing her campaign (enclosed in full below), Bird portrayed Miller as more of an obstacle than an enemy. She described him as a “roadblock in the fight to defend Iowans against the authoritarianism of the Biden administration.”

“Iowa can’t take three more years of Biden mandates. We need to stand up to the authoritarian Biden administration and hold them accountable to our Constitution,” added Bird.

“Iowans deserve an attorney general who will take action to stop Joe Biden and the radical socialists in DC. On everything from EPA regulations that crush Iowa’s farmers, to authoritarian mandates, to advocating defunding the police, the Biden Democrats are wrong. It is incredibly frustrating to watch Tom Miller sitting on the sidelines when we have so much at stake. In other states, attorneys general defend the people of their state.”

Echoing the rhetoric used by Republicans across the country, Bird claimed, “Less than a year into the Biden administration, the radical socialists have taken over the government and our fundamental freedoms are at greater risk than ever before.”

Bird has used the same talking points in media interviews, and on her campaign website.

Today we are seeing more of the same authoritarianism out of Washington and the Biden Administration. Brenna believes Iowans have never been in greater need of an attorney general who will fight back against Biden’s radical agenda, protect the rights of Iowans and stand up for the rule of law – and that is why she’s running to be Attorney General of the State of Iowa.

Similarly, Reynolds endorsed Bird as a “fighter” who will combat “the Biden administration taking steps to control more of our lives.”

Biden’s approval rating in Iowa is in the low 30s, according to the last two Iowa Polls by Selzer & Co for the Des Moines Register and Mediacom. It makes sense for Bird to position herself against an unpopular president, rather than a well-liked ten-term incumbent.

When launching his re-election campaign in September, Miller highlighted his office’s consumer protection work, often alongside attorneys general from both parties. Rod Boshart interviewed him at that time for the Cedar Rapids Gazette.

At the top of that ongoing “to do” list are bipartisan, multistate antitrust actions against big-tech giants like Facebook and Google and ongoing efforts to direct proceeds from multibillion-dollar recoveries linked to Iowa’s role in holding pharmaceutical, tobacco and other conglomerates accountable for actions that were harmful to Iowa consumers. […]

“I want to push consumer protection to even a higher level,” he said, by exploring ways to establish a better “early warning system” for the “classic frauds, like Social Security, IRS and grandparent fraud” and more “intractable” frauds, like telemarketing. Having a track record of aggressively combating sweepstakes, scams and other consumer frauds has sent a deterrent message to would-be criminals: “Don’t do business in Iowa because of the cases we’re brought and the recoveries we’ve made for Iowans,” he added.

“I think there’s a clear indication that by being aggressive we’re helping Iowans not only recover money but being preventive,” he said.

Whereas Bird favors intensely partisan rhetoric, Miller describes himself as a “lawyer for ALL Iowans,” seeking “fairness in law and justice for all Iowans, regardless of political party.”

UPDATE: Writing in Sabato’s Crystal Ball on January 12, Louis Jacobson named this race among the six most competitive attorney general races for 2022. 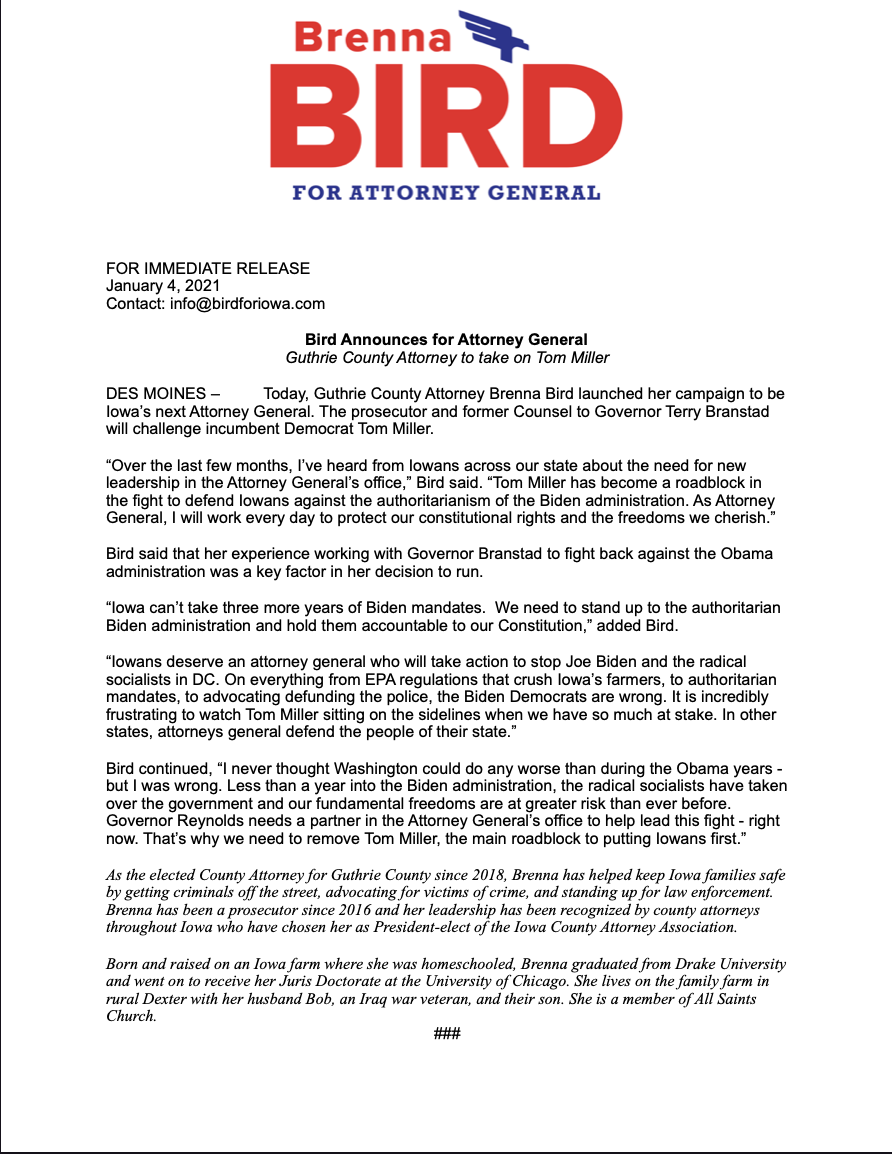