Iowa politics watchers and national forecasters agree that the third Congressional district is the only toss-up race among Iowa's 2022 federal elections. Two-term Democratic incumbent Cindy Axne will face the winner of a three-way GOP primary.

The latest Federal Election Commission filings paint a confusing picture of the Republican race, rather than a clear path for the establishment favorite, State Senator Zach Nunn.

THE LAY OF THE LAND

The new third district (in red on this map) covers 21 counties. About three-fourths of the population live in Polk or Dallas counties, containing most of the Des Moines metro area.

On paper, neither party has a clear advantage. Voters in the new IA-03 favored Donald Trump over Joe Biden by 49.2 percent to 48.8 percent in the 2020 presidential election.

According to the latest voter registration numbers published by the Iowa Secretary of State's office, these 21 counties contained 162,248 active registered Democrats, 153,877 Republicans, and 136,002 no-party voters as of February 2.

Reports covering federal candidates' fundraising and spending during the fourth quarter were due on January 31. Although Axne didn't match her third quarter fundraising, she came very close, with $718,038.17 in total receipts. Individual donors contributed $498.479.75, and a wide range of labor, progressive, industry, or Congressional Democratic political committees contributed $203,900. Axne also received $15,306.99 in transfers from other political committees.

The incumbent’s campaign spent $214,780.61 from October through December, with $207,251.33 going toward a typical mix of operating expenses, such as staff salaries, various kinds of consulting, and advertising. Refunded contributions totaled $7,274.28.

As of December 31, Axne's campaign had $2,104,780.81 cash on hand and no debts. She's on track to vastly outspend the eventual Republican nominee and will have the resources to run a strong district-wide effort.

Granted, conservative groups will surely pour tons of money into this race; some have already spent heavily on advertising attacking Axne. And the GOP candidate may get a huge windfall of contributions over the summer, since IA-03 is a top Republican target for the U.S. House.

That said, Axne's challengers are not building a foundation for a well-funded general election campaign.

I expected big fundraising from State Senator Zach Nunn. In October, he was among the first GOP challengers added to the National Republican Congressional Committee's "Young Guns" program. The move was a signal to donors in Iowa and across the country that U.S. House Republicans want Nunn to face off against Axne. (Many politicos felt Nunn would have been a stronger challenger in 2020, but he backed off after the Iowa GOP establishment coalesced around David Young.)

I was floored to see Nunn's year-end FEC filing. His campaign reported raising $102,169.52 from individual donors, of whom only a handful maxed out with $2,900 contributions. One political action committee affiliated with a GOP member of the U.S. House gave $2,000.

I would never have guessed that any Congressional candidate would raise less money in the months after being endorsed by the NRCC. I expected Nunn to lock down much of the Republican establishment, but there is clearly some resistance to his candidacy among the "usual suspects" who give big money to Iowa GOP campaigns. (Knowledgeable readers are encouraged to reach out confidentially with insight on what is going on.)

The spending side of Nunn's 4Q filing was just as eye-popping: $116,914.81 went toward operating costs. The biggest expenditures were for digital fundraising (more than $52,000), fundraising consulting, direct mail, and "strategic consulting."

Nunn doesn't have a clear shot at the primary, so he may have to spend most of his bank balance to win the nomination.

HASSO MATCHES 3Q FUNDRAISING, BUT SPENDS IT ALL

Nicole Hasso continued to raise an impressive amount for a first-time candidate: $169,030.92 during the fourth quarter, all from individuals. That's roughly equal to her fundraising during the third quarter. And as happened over the summer, the candidate endorsed by U.S. Senator Ted Cruz pulled in $2,900 contributions from some big names in the Iowa GOP establishment, including relatives of major donor Gary Kirke, Iowa Board of Regents President Michael Richards, and Ron Pearson, the former chairman of Hy-Vee (now retired).

As of December 31, Hasso had $133,567.93 in the bank and $34,867.42 in unpaid bills. With such large ongoing costs, it's not clear how much she will be able to spend on paid media before the June primary. That should help Nunn, especially if the NRCC or other GOP-aligned groups put some money behind his candidacy this spring.

The third declared GOP candidate, Gary Leffler, did not file a year-end report with the FEC. His Facebook page indicates he's been actively campaigning for months, so I wondered whether he was just late to submit the paperwork.

In a February 2 telephone interview, Leffler said he didn't file because his campaign has not yet raised or spent $5,000, the threshold for mandatory quarterly reports.

He anticipated he will file a first quarter FEC report, because he will need to spend some money on yard signs and other expenses to win the primary. "I'm not naive."

But he said he's already getting lots of engagement with his Facebook page and had made lots of voter contacts while spending little. Most people get their information through social media now, he observed.

Leffler estimated that he'd gone to more than 70 events as a Congressional candidate, many of which cost nothing to attend. Within the past week, he went to a gun show, an ag expo, and an event at the Faith Baptist Bible College in Ankeny. He said he planned to take his tractor across the southern tier of IA-03 counties on February 5 and 6, and to attend Iowa caucus events on February 7 in Wapello County, where Republican activists from all precincts will meet in one location. He planned more outings in southern tier counties on February 8.

Leffler added that other campaign managers had asked him, "How in the world are you doing this?" The answer is, he's been doing parades and events all over the third Congressional district for the past five years.

In Iowa political circles, Leffler is best known as the "Trump tractor guy." Here's a picture from his Facebook page in November 2020: 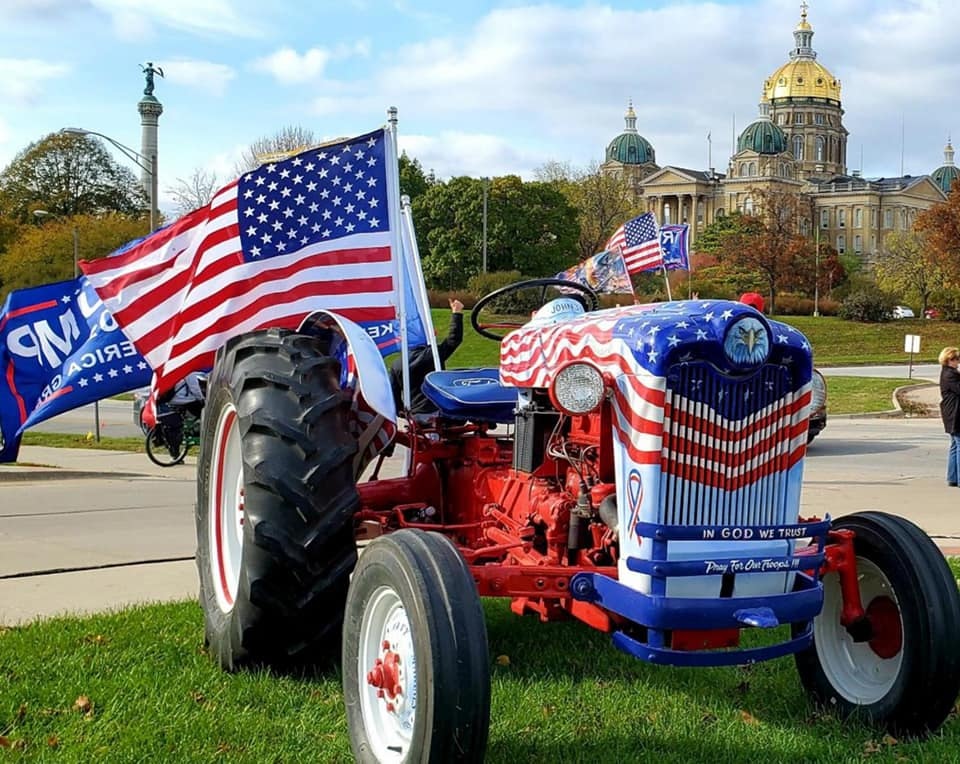 Leffler told me he knows most of the GOP county chairs. At the most recent Dallas County GOP Central Committee meeting, he told the audience, "These other people, they want to run for Congress, but who's been with you for the last five years, been at basically every event you guys have ever had?"

Conventional wisdom says a shoestring operation will not be able to compete against better-funded rivals. Asked how he could defeat Nunn and Hasso, Leffler told me, "They are not meeting any more people than me. For sure they're not doing more events than me. [...] They certainly haven't shook as many hands as I have."

How confident is Leffler that he will be able to qualify for the ballot? (The filing deadline is March 18.) He said he's collected hundreds of signatures for nominating petitions already. For example, he and his wife collected more than 120 signatures at a parade in Madison County last fall. "We feel really strong that we just super-connect with grassroots people."

Leffler also feels the new shape of the district works in his favor. He and his wife lived in Wapello County for eighteen years, and they have relatives who have farmed in Wapello, Davis, Appanoose, and Monroe counties.

Finally, Leffler told me he and his wife live in a two-bedroom apartment in West Des Moines. He characterized his race as possibly "the last, best, chance to elect truly someone of, we the people."

I can't recall any Iowa Congressional primary comparable to this one, and I'm intrigued to see how it plays out. I still consider Nunn the favorite, since Leffler and Hasso may split the hard-core activist vote.

Final note: Leffler attended the "Stop the Steal" rally in Washington, DC on January 6, 2021 and went to the U.S. Capitol building. He has said he did not enter the building and left the area when things turned violent. In any event, he may have particular appeal to GOP primary voters who believe Trump's Big Lie about the 2020 election.