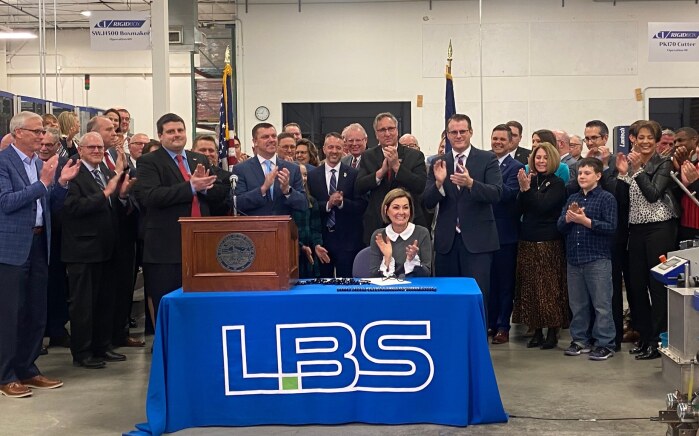 Randy Richardson: Everyone likes paying lower taxes until they realize they may not receive the same benefits from the government.

Americans hate taxes. Other countries have taxes, including some with much higher tax rates, but for some reason their citizens don’t have the same objections as their American counterparts.

There are a variety of reasons for this, but one of the most common is that many Americans are simply unaware of what government does for them. A 2008 Cornell Survey Research Institute poll showed that 57 percent of respondents said they had never participated in a government social program. However, 94 percent of these same respondents reported being the beneficiary of at least one federal government program, with the average participant benefiting from four of them.

Which brings me to the recently enacted flat income tax bill in Iowa.

I suspect many Iowans are applauding Kim Reynolds and the Republicans for lowering taxes and creating what they refer to as a “fairer” tax system. The latest Iowa Poll by Selzer & Co for the Des Moines Register and Mediacom indicated that 54 percent of Iowa adults support a flat income tax, while 38 percent oppose the policy, and 9 percent are unsure.

I taught American government at the high school level for almost 20 years. When students got to the unit on Iowa government, I found many of them had little, if any, knowledge of how our state government functions. I also suspect that many of those students, who are now adults, have paid little attention to state government since graduating from high school.

Republican legislators will point to the elimination on retirement income, cash rent, and farm sales as being very popular. I’m sure that is true…today. Unfortunately those cuts benefit exactly the wrong groups to help the state economy. Reducing taxes on old geezers like me doesn’t mean we’ll spend more money in the state or create jobs. The tax breaks for farmers will mostly benefit older farmers and won’t help young people enter the field.

So let's dig into the numbers a bit. In fiscal year 2021, the state collected $8.801 billion in revenue and had a budget that called for spending $8.119 billion. I taught accounting early in my teaching career so I know a budget doesn't mean that money was actually spent, it was just budgeted to spend. So in 2021 the state should have had a $682 million surplus.

In fiscal year 2022 the state is expected to collect $9.171 billion. Since that year is still in progress we won't know how much they will spend, but we do know inflation is currently at 7.5 percent. Logically that should mean that to maintain the same level of service that you had in 2021, the state will need to spend an additional 7.5% or $8.728 billion. That would still leave the state budget with a $443 million surplus.

Iowa's Revenue Estimating Conference (REC) met earlier this month and estimated that revenue for fiscal year 2023 will decline by 0.2 percent to $9.156 billion. We can hope inflation drop to the 4 percent range by that time. Assuming inflation is at 4 percent, then the state will need to spend $9.077 million to provide the same level of services provided in past years. That still leaves the state with a surplus of $78 million.

The REC also estimated fiscal year 2024 revenue and predicted that because of recently enacted tax cuts, revenue would continue to decline by 2.1 percent to $8.96 billion. In order to maintain the same level of service that we had in previous years (and assuming a 4 percent inflation rate) it would take $9.44 billion to keep services at the current level. That would leave the state with a $480 million budget shortfall.

Since the state isn't allowed to deficit spend, it will have to make $480 million in cuts in 2024 or rely on one time money from the “rainy day” fund to balance the budget. Education spending makes up about 52 percent of the state budget, so guess where any cuts will come from to make ends meet.

It’s also important to remember that the estimates above may be optimistic. Iowa law allows the state to spend only 99 percent of projected revenue and limits the amount of new revenue that the state can use for expenses. If inflation stays high, or if we enter a recession, all bets are off on these estimates.

By the time the tax cuts are fully in place in 2026, the state will have cut $1.9 billion in annual revenues. However, the cost to maintain the current level of public services will continue to increase in 2025 and 2026. That will eventually deplete our “rainy” day fund, and/or lead to massive cuts in services or require tax hikes. Republicans maintain the tax cuts will work because the economy will grow as more business is attracted to our state. You can ask our friends in Kansas how that worked for them.

That not only means cuts to our schools, but also means less money will flow to our counties and cities. To maintain local government services, officials will need to increase local property taxes, unless they decide to cut budgets for law enforcement, road repairs, or snow removal.

Next time you get a chance to visit with state legislators who supported the tax cuts, ask them how they plan to maintain the same level of services we have become accustomed to while cutting such huge amounts from the state budget.

I don't know what kind of Iowa you want to live in, but I like the one with state parks, well-maintained roads, and schools with the highest graduation rate in the country.

Top image: Governor Kim Reynolds and Republican legislators celebrate the signing of a bill that will move Iowa to a flat income tax. Picture cropped from an image posted on the governor's official Facebook page on March 1.