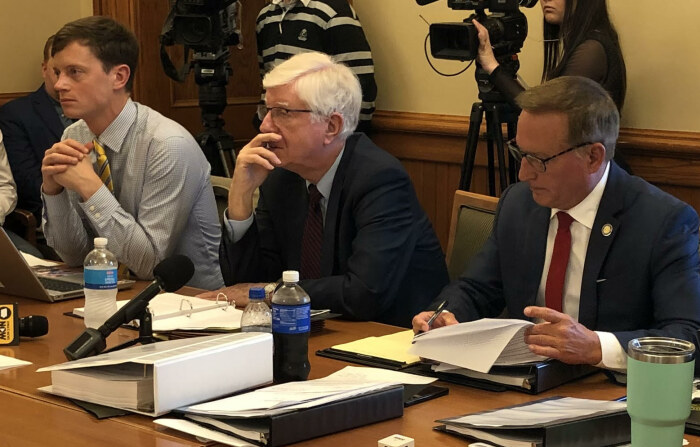 The panel that considers objections to candidates who filed for Iowa's primary election ballot met for hours on March 29, but it took them only a few minutes to reject three challenges based on candidates' residency.

The State Objection Panel, which consists of Secretary of State Paul Pate (R), Attorney General Tom Miller (D), and State Auditor Rob Sand (D), did not spend even 30 seconds deliberating over a challenge to State Senator Ken Rozenboom's candidacy in the new Senate district 19. A Newton resident filed the objection, which the secretary of state's legal counsel Molly Widen summarized during the panel meeting (starting around 1:10:15 of this video by The Iowa Standard).

The objection claimed Rozenboom had exhibited "a pattern of fraud" because in January, he listed a residence outside Senate district 19. Then in February, he signed a letter saying he would resign his seat, yet a few weeks later he filed in Senate district 19.

Appearing in his personal capacity and not as secretary of the Iowa Senate, Charlie Smithson explained that Iowa's new map paired Rozenboom with fellow Iowa Senate Republican Adrian Dickey in Senate district 44. In February, Rozenboom submitted a letter to the Secretary of State's office, saying he would resign his Senate seat, effective January 2023. That wasn't necessary, because Dickey needed to run for re-election this year anyway.

"Nothing in the law" prohibited Rozenboom from filing in Senate district 19, provided he establishes residency in that district at least 60 days prior to the general election.

As soon as Smithson finished talking, Miller made a motion to reject the objection: "You're clearly right" that the requirement is 60 days prior to the election. Sand and Pate immediately agreed.

An Ankeny voter's objection to Iowa Senate Majority Leader Jack Whitver's candidacy met a similar fate. Whitver's affidavit of candidacy listed an address outside the district where he is running, and a form he signed in January did not list any address.

Smithson pointed out that Whitver disclosed he currently lives in Senate district 21 but is seeking re-election in Senate district 23. He has until 60 days before the election to establish residency there. Panel members quickly concurred and unanimously rejected the challenge.

In future election cycles, Iowans should stop using such arguments to try to disqualify candidates.

I understand that Democrats are eager to highlight Whitver's decision to flee a suburban swing district for safer Republican territory. Challenging his nominating papers generated a little media coverage. But it's a waste of everyone's time to put up challenges that are doomed to fail because they are not grounded in Iowa law. Candidates don't have to live in the legislative district at the time they file for the Republican or Democratic primary.

CHALLENGE TO OTHER CANDIDACY REQUIRED SOME DISCUSSION

A challenge to a different Republican's candidacy was more plausible and generated several minutes of discussion.

Lynn Evans, a GOP candidate for Iowa Senate district 3, objected to the nominating papers filed by his primary rival Anthony LaBruna. State law requires candidates to have lived in Iowa for at least one year prior to the general election. Evans questioned where LaBruna was living in late 2021, based on text messages and other materials.

Miller asked LaBruna, a former Iowa State University student who worked in the Trump administration, to briefly describe his employment history and where he had been living. LaBruna explained that he applied for a concealed carry permit in Iowa in 2019 and voted here in the 2020 election. Political fundraising work after that took him to several states, but he denied establishing residency elsewhere.

Widen said a W-2 form dated October 20, 2021 was provided to the Secretary of State's office. It indicates LaBruna was working for Senator Chuck Grassley's campaign and listed an address in Urbandale as his residence.

Sand commented that "home sometimes is a state of mind," but "the question in front of us is a legal question." Since LaBruna had been registered to vote in Iowa and had a W-2 with an Iowa address more than a year before the 2022 election, he would deny the objection.

Miller agreed, adding that he had "flashbacks" to 1973, when he was living in Baltimore and wanted to run for Iowa attorney general. Fortunately for him, state law required only one year of residency prior to the 1974 general election, not two. (Miller lost that race but was elected attorney general for the first time in 1978.)

The panel members then voted to reject the challenge to LaBruna's candidacy.

Evans told Bleeding Heartland after the proceeding that he accepted the panel's ruling and was "looking forward to the race" against LaBruna.