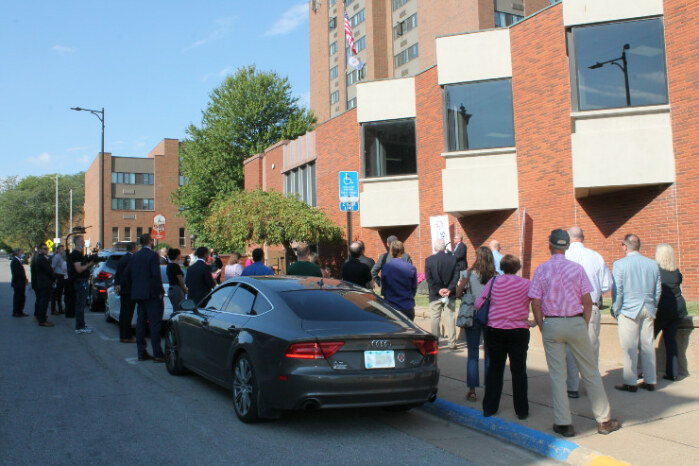 Drumming and singing and chanting are background sound for writing this column. Video streaming from the 106th annual Meskwaki Powwow shows colorfully attired modern Iowans stepping rhythmically together, everyone off the bleachers between solo dances of various styles and meanings.

Near Tama, just off the Lincoln Highway, the Meskwaki Nation settlement is distinct because their settlers weren’t immigrants from Europe or elsewhere across oceans. They came from natives who were here when the rest of us arrived.

Coinciding with our big state fair, the pleasant little festival reminds us our “beautiful land between the rivers” is a crazy quilt of distinct ethno-historical communities—however some pieces fade and however melting-potted our strip malls.

I’m remembering the “ground healing ceremony” outside Muscatine’s former Musser Public Library, at the start of the “Living Building” transformation that’s blocked Iowa Avenue this year. (When finished it will be the ecologically stellar headquarters of the Stanley Center for Peace and Security, the new identity of the organization I came here to work for 40 years ago.)

CEO Keith Porter asked those present to think beyond memories of the beloved library, to understand the history of where the building is “rooted in place.”

“We must also acknowledge that it forms part of the unceded core traditional territory of the Kickapoo, Sauk, Meskwaki, and Ogallala Sioux indigenous tribes, and not all of those people left here voluntarily.”

An aborigine arrived on the train from Iowa City last evening, and attracted some attention on our streets. From a letter in his possession it appeared that his name is Wy-to-ko-qua, of the Musquakie tribe, and that he is on his way to visit Mr. Phelps, of Oquawka, who was formerly an Indian trader, and with whom this tribe seems to have been acquainted. … His tribe live, we believe, in Tama county in this State.

P.S. We are sorry to say that Wy to-ko-qua has given evidence of his progress in civilization by getting drunk and taking lodgings on cellar doors, &c. The individual who gave the poor vagabond liquor deserves severe punishment.

P.S. No. 2. Wy-to-ko-qua is taking another degree in the honors of civilization at the calaboose.

A few months later (August 26), the Journal reported an 11-pound stone axe found by boys “near the mouth of Pappose creek.” Then this:

John Hayes, Esq., found a few days ago a greater curiosity than the above, in the shape of a pot made of muscle shells…probably made to contain the food deposited in the grave for some departed brave on his supposed journey through the spirit land. … The pot was found on the bluff above Mad creek, which seems to have been once used as a burying place by the aborigines.

How does reading this make you feel? Remember, it was 1859.

Headline at “Above the Law” website, August 2, 2022: “Law School Name With Genocidal Background One Step Closer To Being History.”

Read and weep. So much for our good-guy judge?

For years I’ve been reciting the story of Jim White, who was freed by Serranus C. Hastings in 1848. An enslaved person proclaimed free on Iowa’s free soil, right here in Bloomington (soon to be renamed Muscatine). One of our earliest and best Alexander Clark stories, because he was a central player in the drama. So we liked that judge.

Now his ghost is back with a vengeance.

Once a resident of our town, Hastings is remembered as the man who was chief justice of the supreme courts of both Iowa and California. The University of California Hastings College of the Law in San Francisco was founded in 1878 and named in his honor. Something bragged on around here ever since.

About three months ago, while writing columns 11 and 12 in this series, I discovered and reported the renaming of the school as reckoning for the judge’s role in genocide against indigenous people of the Mendocino County area, where he became fabulously wealthy at land speculation and ranching.

A careful investigation had determined that he did, in fact, enable and abet the Eel River Rangers, a “militia” gang of murderers that carried out “Indian hunting parties” against the Yuki people. Our Muscatine judge was an organizer and funder, and his fortune directly benefited. The worst of it happened in 1859. You can read online the study committee’s full, damning “white paper.”

The Yuki people. Say their name!

Now remember, it’s easy to cheer for the good guys and boo the baddies after the dust has settled. Historians argue about “presentism”—judging our ancestors by today’s standards.

“And we also acknowledge that the site was adjacent to the home of Alexander Clark, a Black American who helped desegregate Iowa schools…and who went on to serve as the U.S. ambassador to Liberia.” (Keith Porter, September 17, 2021)

Next time: Where was Susie Clark’s school?

Top image: Keith Porter speaking at the "ground healing" ceremony outside the new headquarters of the Stanley Center for Peace and Security. The tall building in the background is the Clark House apartments on the historic site of the home of Alexander Clark and family.