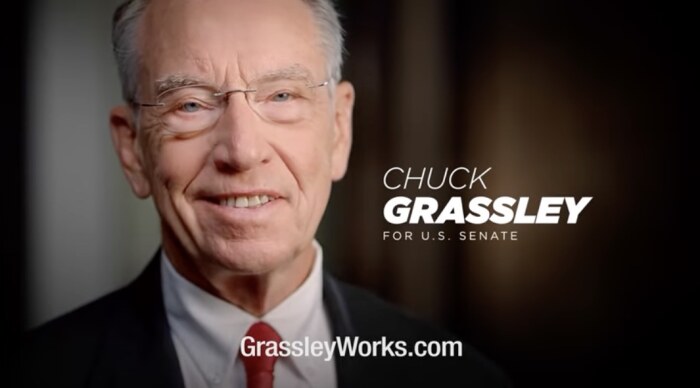 The home stretch of this midterm election campaign is unfolding in in 3-D format — Dire, Divisive, and Despairing. That's particularly true of the U.S. Senate race between Republican incumbent Chuck Grassley, seeking his eighth term at age 89, and Democrat Michael Franken, a retired U.S. Navy admiral, who will be 65 on election day, November 8.

That 3-D nature of our Iowa politics was illustrated well in one of the Grassley campaign's recent television commercials.

In a backhanded way, Grassley acknowledged why it is time for Iowans to vote him out of office.

The ad released in early September is called, "Who Does This Guy Think He is?"

The premise is that Franken is talking down Iowa. It's stunning to hear a voice-over (speaking for the Grassley campaign) ridicule this promise from the Democrat: "We can do this: rescue the state of Iowa. Rescue our reputation."

Time and again, Bleeding Heartland authors have echoed Franken's point of view: what Iowa has become under Republican trifecta governance is not what we want for future generations.

For openers, please consider the essay John and Terri Hale wrote in February: “We used to be proud to be Iowans.” It’s a straightforward, thoughtful and nonpartisan piece, certainly not disparaging nor hopeless. Their references and recollections touch upon significant people and events, providing insight on how this state has changed.

Now consider our senior senator's contributions to the political culture.

For at least two decades, Grassley has lied about how the estate tax, which he calls a “death tax,” affects family farms. Experts have refuted that characterization. The late Neil Harl, an ag economist for Iowa State University, could not find farm families facing anything like the woes Grassley described. More recently, Neil Hamilton, now retired as director of Drake University's Agricultural Law Center, called the senator’s talking points “hogwash.” The inheritance tax now exempts a couple’s first $23 million of estate value.

To fears of “death panels” and “death taxes” we can now add fear-mongering about IRS death squads. As Tom Barton reported for the Cedar Rapids Gazette in August, Grassley wondered during an appearance on a Fox News show whether the Internal Revenue Service "would use increased funding from the Inflation Reduction Act to send armed units of agents into small Iowa businesses."

"Are they going to have a strike force that goes in with AK-15s already loaded, ready to shoot some small business person in Iowa with these, because I think they’re going after middle class and small business people, because they think that anybody that has pass-through income is a crook, and they aren’t paying their fair share, and we’re going to go after them,” he said.

In TV ads and in occasional news clips, Grassley does push-ups to show his physical fitness. His Senate work often involves political "pull-downs" as well. His tenure as Senate Judiciary Committee chair will be marked for disdain for civil liberties. He has helped shaped the federal judiciary to pull down womens rights in wiping out the Roe v. Wade precedent with promises of more reactionary rulings to come. This Bleeding Heartland post from 2020 laid out the scenario, citing a law review article about Grassley’s Judiciary chairmanship that Iowa’s mainstream media ignored.

Grassley’s penchant for speaking out on contrived issues is compounded by his failures to be a desperately needed voice of moderation, experience, and influence in our divisive times. After Donald Trump's most recent Iowa rally in 2021, Grassley dismissed the former president’s irresponsible rants and incitements, declaring, "He's a private citizen…He can say anything he wants to.”

One of the senator’s latest tv ads boasts that his seniority in the U.S. Senate is "priceless for Iowa." But his reluctance to use that clout in healing ways is troubling. In emails sent to his office, I’ve quoted the fears attributed to Edmund Burke, John Stuart Mill, and other political philosophers: “All that is necessary for evil to triumph is for good men to do nothing.”

Grassley does not respond to those messages. He might consider another observation, sometimes attributed to theologian Dietrich Bonhoeffer, executed by the Nazis because of his opposition to Hitler: “Silence in the face of evil is itself evil: God will not hold us guiltless. Not to speak is to speak. Not to act is to act.”

With these and other concerns, how can Iowans not take heart in Franken’s appeal? "We can do this: rescue the state of Iowa. Rescue our reputation."

That reputation includes continuing gratitude to the late Governor Robert Ray, who responded to the refugee crises in southeast Asia by welcoming Tai Dam refugees to Iowa in 1975.

Contrast that with Governor Kim Reynolds, who demagogued against non-existent "sanctuary cities" and signed an immigration bill opposed by law enforcement groups as well as dozens of government or nonprofit organizations. Reynolds' Republican colleagues, Governors Greg Abbott of Texas and Ron DeSantis of Florida, sent refugees in their states to Washington DC and Martha’s Vineyard in Massachusetts in obvious political stunts.

That, too, is not the kind of state we want Iowa to be for future generations.

P.S.—While this post focuses on Grassley's campaign advertising and related concerns, Bleeding Heartland will continue to cover other aspects of the Senate race as well. In case you missed it, Laura Belin addressed this week's controversy involving Franken and his former campaign manager.