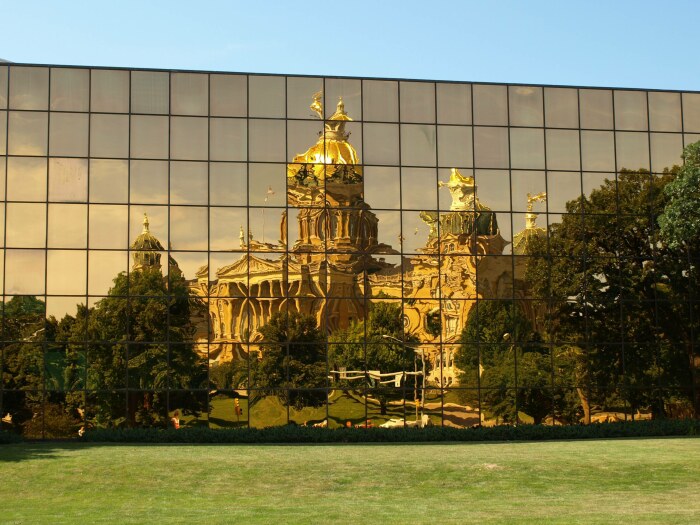 Exclusive: Labor relations board shifts staff, cases to other agency. Is it legal?

Iowa's Public Employment Relations Board (PERB) is transferring most of its staff and caseload to the state Department of Inspections and Appeals.

State officials have not announced the changes, which are scheduled to take effect on September 30. It's not clear who initiated or authorized the plan. Staff in the governor's office and Department of Inspections and Appeals did not respond to any of Bleeding Heartland's inquiries over the past three weeks. PERB members Erik Helland and Cheryl Arnold likewise did not reply to several emails.

State Senator Nate Boulton, a Democrat with extensive experience as a labor attorney, has asked Attorney General Tom Miller for an official opinion on whether "it is an illegal shift of an essential PERB duty" to assign its responsibilities "to an unrelated state agency."

Boulton also asked Miller to weigh in on the legality of Governor Kim Reynolds' recent appointments to PERB. As Bleeding Heartland previously reported, Reynolds has circumvented the Senate confirmation process by keeping one of the three PERB positions unfilled, so she can name her preferred candidates to a vacant slot while the legislature is not in session.

The Iowa legislature created PERB in 1974 as part of the wide-ranging collective bargaining law known as Chapter 20. The agency's responsibilities include resolving disputes over prohibited practice complaints, whistleblower complaints, and grievance or discipline appeals. PERB members have overseen mediation and arbitration, have administered recertification elections of public sector employee bargaining units, and are supposed to conduct studies on the conditions of public employment.

Administrative law judges (ALJs) hear most cases that come to PERB. The losing party may appeal decisions for consideration by the full board.

Charles Gribble, a Des Moines-based employment attorney who has represented clients before PERB and in Iowa courts since 1975, expressed concern about the coming changes in a telephone interview with Bleeding Heartland.

PERB "has been very successful at mediating and resolving disputes" involving public employees in Iowa, Gribble said. He fears "that function will be lost" as cases are transferred to another agency. "No one knows for sure" who will be responsible for the mediation work PERB has handled.

Another loss: having appeals heard by ALJs familiar with nearly 50 years of Iowa case law and how to apply employment law principles. "There's a reason we have a National Labor Relations Board and a Public Employment Relations Board," Gribble said. It's a specialized area. ALJs working at PERB are dedicated to that field, "which is an asset to both employers and employees."

Sending cases to Department of Inspections and Appeals ALJs who have no background in employment law may lead to "inconsistent decisions," Gribble fears.

The Iowa State Education Association represents the majority of Iowa teachers, and its members have taken many cases to PERB. Asked about the changes coming to the labor relations board, ISEA President Mike Beranek told Bleeding Heartland in a written statement,

Iowans deserve top notch public services. The workers who educate our children, keep our streets safe and in good repair and serve Iowans in a multitude of capacities deserve an effective and efficient governing agency. We are concerned these reductions we’re seeing in the staff at PERB undercuts that.

WHICH POWERS CAN PERB DELEGATE?

In his September 20 letter to the attorney general, enclosed in full below, Boulton noted that once ALJs at Inspections and appeals take on PERB cases, the DIA staff will "have extremely broad jurisdiction to evaluate claims and disputes across multiple areas of law."

Boulton suggested that outcome runs counter to "due process protections afforded Iowans as well as the statutory authority granting agencies the jurisdiction to resolve disputes."

The letter cited a 2002 Iowa Supreme Court decision known as Kennedy v. Civil Service Commission. In that case, the justices determined that the city of Council Bluffs Civil Service Commission erred in delegating disciplinary appeals filed by police officers. The Supreme Court had established in earlier cases that the "power to 'hear and determine' is an essential component" of a civil service commission's mandate and "refers to a judicial investigation in settlement of an issue of fact." Justices concluded, "We are satisfied that in assigning duties to the commission the legislature intended that all critical duties be performed by those persons empowered by law to do so, i.e., the duly appointed commissioners."

Boulton pointed to an apparent contradiction in Iowa Code. The code section outlining PERB's powers and duties "allows PERB to generally transfer cases to DIA administrative law judges," but a different part of Chapter 20 says PERB "may designate one of its members, an administrative law judge, or any other qualified person employed by the board to serve as the presiding officer" at a hearing on a prohibited practice complaint.

For that reason, Boulton asked Miller for a formal opinion on "whether or not it is an illegal shift of an essential PERB duty to have specifically-assigned adjudication responsibilities transferred to an unrelated state agency."

Gribble flagged another potential problem. In one recent case, his firm represented a state employee who did not prevail at PERB. After appealing to District Court, they received two letters from assistant Iowa attorneys general. One said the state supported PERB's decision and filed a brief to that effect. A second letter said PERB would have "no further involvement" in the case and would adopt the state of Iowa's position in its legal brief. Under Gribble's reading of PERB's administrative rules, the agency is required to appear in court to defend its decisions.

Conversely, if an employee prevailed at PERB, and the state appealed that decision to District Court, "Who's going to file a brief on behalf of PERB?" Gribble wondered. The Attorney General's office can't file a brief defending PERB while also asking the court to reverse the agency's decision.

MOVE MAY CREATE CONFLICTS OF INTEREST

PERB's mission statement is "To promote harmonious and cooperative relationships between government and its employees without disruption of public services, via the expert and timely services of a neutral agency."

One aspect of its neutrality: the ALJs working at PERB are merit-based state employees, not part of any labor union's bargaining unit.

In contrast, the ALJs at the Department Inspections and Appeals are covered by AFSCME Council 61, the labor union representing the majority of state employees in Iowa. PERB has heard appeals from the DIA's ALJs, most recently in a case filed in 2019 and decided in 2021.

AFSCME declined to comment on the planned changes at PERB.

Although Iowa's Code of Judicial Conduct does not extend to administrative law judges, its provisions on disqualification appear relevant to this kind of situation. Judges are supposed to recuse from "any proceeding in which the judge's impartiality might reasonably be questioned," including when a judge has "a personal bias or prejudice concerning a party or a party's lawyer."

No doubt an ALJ who belongs to AFSCME could be objective when hearing a case filed by another AFSMCE member. But the employer might reasonably consider it a conflict of interest for that person to preside over the matter.

UPDATE: The Iowa Code of Administrative Judicial Conduct has nearly identical language calling on presiding officers to disqualify themselves from "any proceeding in which the presiding officer’s impartiality might reasonably be questioned," including when the ALJ "has a personal bias or prejudice concerning a party or a party’s lawyer or other representative."

The main focus of Boulton's letter to Attorney General Miller was Governor Reynolds' approach to PERB nominations. Under Iowa Code, "The board shall consist of three members appointed by the governor, subject to confirmation by the senate." The Senate has not confirmed any PERB nominee since Republicans removed most public employee collective bargaining rights in 2017.

Reynolds has kept her preferred appointees on the board by declining to appoint a third member to PERB. In 2021 and again this year, Reynolds withdrew Helland's nomination once it was clear he would not be confirmed, then reappointed him over the summer, putting him in the vacant position.

Boulton wants Miller to weigh in: if the governor appoints someone and later withdraws the nomination, "is it legal for that individual to continue to serve in that Senate-confirmed position?"

Erik Helland has been a PERB member since 2020 without ever receiving a Senate vote and seems to be destined to continue to do so until the Senate convenes again in 2023—when his name may be withdrawn again and then potentially reappointed to another open PERB position.

Boulton also wants the attorney general to determine whether an appointee who fails to receive the required two-thirds Senate confirmation vote can be reappointed to the same board. As Bleeding Heartland exclusively reported early this month, Reynolds named Arnold to a PERB vacancy in August, even though the Iowa Senate voted in 2020 not to confirm her to serve as board chair.

Reynolds replaced the lone Democrat on PERB with a Republican in October 2021, leaving the three-member body with two Republicans and one vacancy. Boulton is seeking an opinion on whether a board can operate while not meeting Iowa's partisan balance requirement.

Finally, Boulton wants to know whether a board with only one of three members appointed has "legal authority to act in its adjudicative and rule-making functions." For several weeks this summer, Helland was the only PERB member.

Reynolds has consolidated some state agencies, most recently the Iowa Department of Public Health and the Iowa Department of Human Services. Are the coming changes at PERB the first step toward merging that agency with the Department of Inspections and Appeals, pending the approval of enabling legislation? Staff for the governor did not reply to Bleeding Heartland's inquiries.

Even if the legislature amended Chapter 20 to dissolve PERB or remove Senate confirmation requirements for the board's members, a broader principle is at play here. From Boulton's letter:

To be clear, while the concern is about these specific appointments to this specific board right now, it is certainly a legal question of great importance to establish whether the governor can wholly avoid required Senate confirmations by leaving positions vacant on boards to allow interim appointments to be made and withdrawn indefinitely. It would seem that the current situation runs afoul of the law and erodes an essential aspect of the constitutionally shared powers of the legislative and executive branches of state government.

Iowa's attorney general has discretion regarding state legislators' requests for official opinions. Miller has not decided whether to issue a formal opinion on the matters Boulton raised, according to Lynn Hicks, communications director for the Attorney General's office.

Top image: Iowa state capitol building reflected in the windows of the Henry A. Wallace building across the street. Photo by Mike McCarville available via Shutterstock.