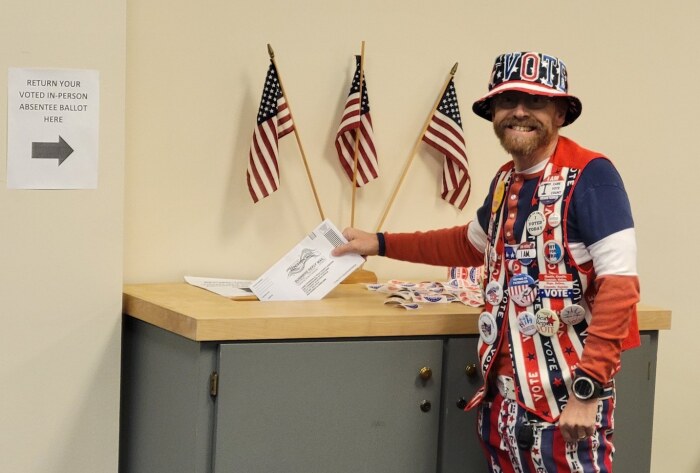 What's going on with early voting in Iowa after new Republican-backed laws restricted the practice in many ways?

Overall numbers are way down compared to the same point in the previous two midterm election cycles, and Iowa Republicans are further below their early voting benchmark than are Democrats.

This post focuses on statewide absentee ballot numbers, because Iowa's new Congressional districts (while similar in overall shape) are not configured as they were during the 2010s.

If you go back and look at the district-level breakdowns Bleeding Heartland published during the 2018 or 2014 campaigns, remember that what was labeled IA-01 in those tables covered most of northeast Iowa, which is now called IA-02. Conversely, the district covering most of southeast Iowa was IA-02, now known as IA-01 and with a different configuration.

OVERALL NUMBERS ARE WAY DOWN

The most recent absentee ballot statistics released by the Iowa Secretary of State's office are dated October 28, using numbers county auditors reported the night before. October 27 was twelve days before this year's election, so I went to my archives to find the same numbers from previous midterms.

This table combines totals for absentee voting in person and by mail.

Iowans cast 1,142,311 ballots in the 2014 midterm election. Nearly a quarter of those were already in by twelve days before the election.

Assuming turnout is between 1.1 million and 1.3 million this year, only about 12 to 15 percent of the ballots had been returned to county auditors by October 27.

Why the big decline? The most important reason is Iowa's early voting window is much shorter now.

Iowans could start casting ballots 40 days before the 2014 election. By the time we got to twelve days before November 4, voters had had four full weeks to cast a ballot in person or by mail.

Republican lawmakers and Governor Terry Branstad shortened the early voting period to 29 days in 2017. So Iowans had had more than two weeks of opportunities to cast a ballot in person or get a mailed ballot back by twelve days before the 2018 midterm.

Under a law GOP legislators and Governor Kim Reynolds enacted last year, early voting now begins just 20 days before the election. So October 19 was the first day Iowans could vote in person and the first day county auditors could put ballots in the mail (other than for military or overseas voters).

In other words, statistics from October 27 reflect a little more than a week of in-person early voting, and less than that for Iowans who requested mailed ballots. (U.S. postal service delivery takes several days in many parts of Iowa. So even if voters filled out the ballot right away and put it in the mail, the envelope might not have reached the county elections office yet.)

Many GOP politicians boast that recent election law changes have made it "easy to vote" but "hard to cheat" in Iowa. It was always hard to cheat here; only a handful of ballots were cast illegally in previous elections, with no pattern suggesting organized fraud.

All Republicans have accomplished is to make it harder to vote.

GOP VOTERS ARE FURTHER BELOW THE PREVIOUS YEARS' BENCHMARKS

The decline in early voting is not uniformly distributed. Here are the same numbers, broken out by partisan affiliation. For simplicity, I didn't include Libertarian or "other" voters. You can find those in my posts from 2014 and 2018.

Iowa Democrats had returned nearly 40,000 more ballots than Republicans, as of October 27. That's a bigger lead than they had at the same point in 2014 or 2018.

The obvious explanation is that politically engaged Iowans have changed their behavior in response to messages they hear from like-minded opinion leaders.

Since 2020, former President Donald Trump and influential conservative politicians and commentators have sought to equate voting by mail with fraud. While Branstad was governor, the Republican Party of Iowa invested heavily in an early GOTV program. The Iowa GOP has done some absentee ballot request form mailings this year, but the early vote program doesn't appear to be on the same scale as in some previous cycles.

I wouldn't assume overall GOP turnout will be lower, though. The vast majority of Iowa Republicans who plan to vote this year will do so on election day. Most will make it to the polling place.

However, it's risky to count on election-day votes, because illness, work or family obligations, or other emergencies will prevent some voters from following through. A severe weather event on November 8 could affect the outcome of close races.

Many Democrats (myself included) have discouraged voting by mail this year, because of the manifold new barriers to getting a mailed ballot counted. Whereas ballots postmarked before the election used to be considered valid, now they must arrive by 8:00 pm on election day to be counted. And it's no longer legal in Iowa to ask a friend, neighbor, or campaign volunteer to hand-deliver your completed absentee ballot. Democrats who voted by mail in past cycles may have decided not to chance it this year.

In addition, the Iowa Democratic Party's "coordinated campaign" for GOTV is smaller than in the past, due to funding constraints. So fewer voters received reminders to vote early.

But Democratic candidates are still encouraging supporters to vote early in person, or hand-deliver their ballots to county auditors' drop boxes. Tens of thousands of Democratic voters have done so (the breakdowns for ballots cast in various ways are in tables here).

A quick word about the independents: requests from no-party voters are only about 42 percent of the 2018 level, and ballots returned to the county auditor are just under 48 percent of the number from twelve days before the 2018 elections. Turnout among Iowans affiliated with neither major party tends to "drop off" more in non-presidential years. I also suspect that the Iowa Democratic Party and the Republican Party of Iowa are targeting fewer no-party voters this year with early vote mailings.

HOW BIG A CUSHION DO DEMOCRATS NEED?

For political junkies who track early vote numbers, the most important question is whether the Democratic firewall will hold. It's impossible to answer without knowing what total turnout will be, and how independents will split. But in all likelihood, Democrats would need to extend their current advantage (about 40,000 more votes banked than Republicans) to win statewide elections.

It's a safe bet that GOP candidates will carry the election-day vote in many races this year. And historically, a higher percentage of Republicans than Democrats turn out for Iowa midterms, even though Democrats are more likely to vote early than Republicans.

Going into election day 2014, Democrats had returned about 8,000 more ballots statewide than Republicans. The no-party voters who cast early ballots seem to have favored Bruce Braley over Joni Ernst, because he carried the early vote for U.S. Senate by 233,035 to 209,035, according to the official canvass.

Going into election day 2018, Democrats had returned about 40,000 more votes than Republicans, and county auditors had already received more than 538,000 ballots. That wasn't enough to stop Kim Reynolds from beating Fred Hubbell in the governor's race by about 36,000 votes, according to the official canvass.

I have no idea what should be a target for Democrats to bank before November 8. But I do know that the more Democrats vote early, the smaller the universe for candidates and volunteers to contact as the election approaches.

So if you've received an absentee ballot by mail, return it to your county auditor as soon as possible. And consider voting in person at the county auditor's office or a satellite location over the next ten days. It usually only takes ten to fifteen minutes, and you don't have to rely on the U.S. Postal Service to get your ballot in on time.

Top photo of the first voter to cast a ballot in Polk County on October 19 was posted on Facebook by the Polk County Election Office.