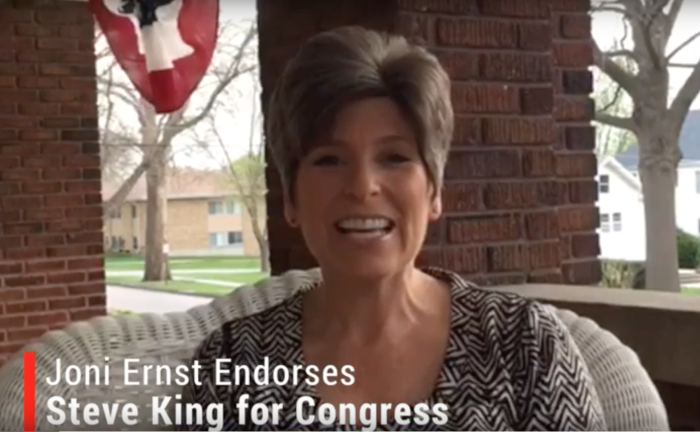 IA-04: Joni Ernst is all in for Steve King

Birds can be heard singing in the background as Ernst praises King for supporting life, liberty, the military, four-laning U.S. Highway 20, and the fuel blender tax credit. The sound you can't hear is the door slamming on Bertrand's already slim chance to win this primary.

Ernst served with Bertrand in the Iowa Senate GOP caucus from 2011 through 2014, so has observed his political work more closely than most Republicans. She could have stayed neutral, though seven-term incumbent King was heavily favored to win the IA-04 primary even before Iowa Secretary of Agriculture Bill Northey and U.S. Senator Chuck Grassley publicly backed him.

As with Grassley's endorsement, I wonder whether Ernst wanted to dish out some payback to Nick Ryan, the dark money operative who was recruiting a primary challenger in IA-04 and endorsed Bertrand immediately after the state senator made his campaign official.

Ryan worked for Mark Jacobs during his race against Ernst and others in the 2014 GOP primary for U.S. Senate. (Bruce Rastetter, a frequent ally of Ryan and major ethanol industry figure who is also supporting Bertrand against King, backed Ernst early in that race.)

Bertrand has been promoting himself as someone who will deliver for IA-04 in Congress, rather than trying to be a "national figure." Last week, he asserted in an interview with the Des Moines Register's William Petroski that there is widespread "discontentment" with King, who "has gone Washington." Echoing that talking point, Ryan told Petroski, "I believe we can do better. I want a conservative congressman that cares more about getting things done for his district than booking an appearance on Fox or MSNBC."

Ryan can raise a lot of money to spend on campaigns, but his track record in Iowa GOP contests is mixed. Unsuccessful candidates who benefited from spending controlled by Ryan include: Jim Gibbons in the 2010 primary for Iowa's third Congressional district, Annette Sweeney in the 2012 primary for Iowa House district 50, Jacobs in the 2014 Senate primary, Matt Schultz in the 2014 primary for IA-03, and Mike Huckabee before the latest Iowa caucuses.

P.S.-Asked this morning whether he wants "to see King defeated" in June, Governor Terry Branstad replied, "It's up to the voters to decide in each of these instances and I've always had confidence in the voters of Iowa to make a good decision and I will obviously support the Republican nominees," O.Kay Henderson reported for Radio Iowa. Branstad made headlines by calling for Ted Cruz's defeat less than two weeks before the Iowa caucuses. King was Cruz's leading surrogate in Iowa after endorsing the Texas senator for president in November.

Video released by King for Congress on April 25:

Joni Ernst speaks to the camera: I'm supporting Steve King in Iowa's fourth Congressional district. Steve has stood strong for life and liberty, and speaking personally, I've appreciated his support for our military overseas and our brave servicemen and women as they return home. In his district, King has championed the expansion of [U.S.] Highway 20 to improve transportation and encourage the growth of business and industry. In Washington, King has been a tireless supporter the fuel blender tax credit, which makes renewable fuels more accessible to consumers in Iowa and around the nation. Steve is a friend to small businesses in our Iowa towns and the agriculture industry that helps drive our state. I hope you'll join me in supporting Steve King for Congress.

“I am honored to receive Joni Ernst’s endorsement and support. We first met in the middle of the night on one my trips to visit troops. Then Captain Ernst commanded the 1168th transportation company tasked with hauling supplies overland from Kuwait to Baghdad. I quickly learned Captain Ernst’s first concern was for her troops. I have seen Joni progress through the ranks all the way to United States Senator. Most importantly, she has grown into each more difficult responsibility with the skills of a natural leader,” King said. [...]

Among others, King has received the endorsements of Senator Chuck Grassley and of Secretary of Agriculture Bill Northey.

King serves on the US House Agriculture, Judiciary, and Small Business Committees. In 2015, he was named Chairman of the Executive Overreach Task Force by Speaker Paul Ryan. King has long chaired the Conservative Opportunity Society (COS), an organization founded by Speaker Newt Gingrich and others in 1983. COS is the leading voice for Constitutional and conservative principles in the U.S. House and represents one of only a half dozen seats at Speaker Ryan’s discussion table each week.
Congressman King is the founder of King Construction. A former small business owner, King resides in rural Sac County, Iowa, with his wife of 43 years, Marilyn. The Kings have three happily married sons and seven grandchildren; all the Kings live within 10 miles of each other.