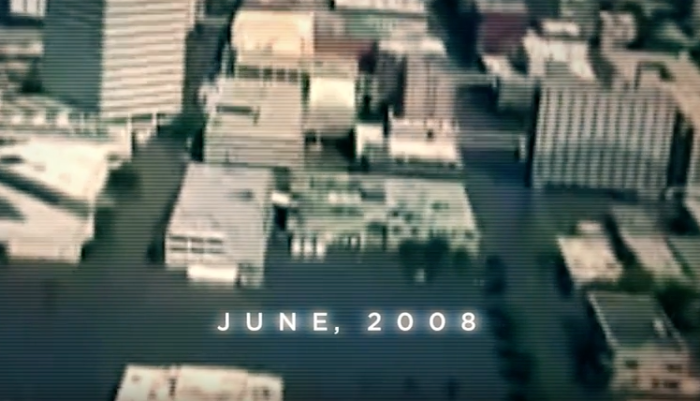 Former Lieutenant Governor Patty Judge launched her first television commercial as a U.S. Senate candidate on May 24, two weeks before primary voters will determine which of four Democrats will take on six-term Senator Chuck Grassley.

The 30-second spot, which is running in the Des Moines and Cedar Rapids markets, highlights Judge's work as the Culver administration's Homeland Security Advisor, which gave her a leadership role as state government responded to devastating 2008 floods in eastern Iowa.

It's a smart strategy.

Here's the video of "Flood":

Judge: Our recovery began by working together. [Judge is still speaking to the camera, but now viewer can see she's standing in an office where several people are working at computers, with images of flooding. A big map of Iowa hangs on the wall. The candidate's name is on screen.]

Nobody had time for pointing fingers. [closer view of Judge speaking to the camera, with her name still on screen]

Voice-over: As Homeland Security advisor, Patty Judge coordinated the local response to rebuild our communities. [footage of Judge, appearing to speak on the phone in an official capacity, as she would have in that flood response role. Then images of people sandbagging during floods and later rebuilding structures that were destroyed. Words on screen: Lt. Governor Patty Judge Iowa's Homeland Security Advisor; then "The Des Moines Register Judge 'Coordinating the rebuilding effort' July 26, 2008"]

Judge speaking to the camera: I'm Patty Judge. Partnerships and problem-solving: that's how we get things done around here, and that's why I approved this message. [Judge again standing in what looks like a re-created government office where people are responding to the floods. Words "Partnerships," then "Problem Solving" appear on screen]

Because Washington sure could learn a thing or two from Iowa. [closer view of Judge speaking to camera, with campaign logo at left side of screen]

Although the ad won't win any prizes for creativity, it presents a clear message, which can be received even if the viewer has muted the television during a commercial break. This spot strikes me as a very strong way to present Judge to Democratic voters.

First, it tells people something new about a familiar figure. Almost anyone who has heard of Judge remembers that she used to be Iowa secretary of agriculture, so playing up her background as a farmer and an advocate for the farm sector would add little value.

Despite having followed Iowa politics closely throughout Governor Chet Culver's four years in office, I had forgotten Judge led flood response efforts. I would guess very few Democrats were aware of her Homeland Security role. Judge has highlighted this aspect of her work in the Culver administration during various recent public appearances, such as a Democratic Senate candidate forum in Des Moines in early May.

Second, it gives voters on State Senator Rob Hogg's home turf a reason to support Judge. Among the Democrats running for U.S. Senate, Hogg is widely considered Judge's main competition for the nomination. Key labor unions are supporting his candidacy, along with scores of current and former state lawmakers. Hogg grew up in the Iowa City area, attended the University of Iowa, and has lived in Cedar Rapids for most of his adult life, representing parts of that city in the Iowa legislature since 2003.

To win the primary, Hogg needs a very strong turnout in the Iowa City-Cedar Rapids corridor. A few external factors work in his favor:

• A contentious county supervisor race will bring out lots of Democrats in Johnson County.

I have not seen any polling on the Democratic campaign for U.S. Senate, but based on this commercial, I would guess that the Judge's internal surveys showed her not doing as well in eastern Iowa as in other parts of the state. I would also guess that even though Judge already had higher name recognition than Hogg, Tom Fiegen, or Bob Krause, Democrats surveyed responded favorably to learning that Judge was involved with flood recovery.

Any comments about the Senate race are welcome in this thread.

P.S.- Shortly after the Judge campaign released this commercial on May 24, the Republican Party of Iowa bashed her work in this statement. Expect more along these lines if Judge becomes the Democratic nominee:

Rebuild Patty: The Retelling of a Failed, Flawed Flood Response

Missing from the story, however, is the complete ineptitude with which she managed her high-profile role.

One of her first duties wasn’t to help flood victims...but to replace the carpet with $19,000 in money intended for said victims.

This prompted a member of the House Rebuild Iowa Committee, then-state Rep. Jeff Kaufmann, to defend flood victims over the bureaucratic nightmare that was the Rebuild Iowa office:

"The condition of the Wallace Building is better than some of my flood victims' homes before the flood," said Rep. Jeff Kaufmann, R-Wilton. "Can you understand how I have a hard time letting them know that this was a valid expenditure?" – “Dardis Deflects Carpet Criticism,” Waterloo-Cedar Falls Courter, 2/10/09:

"That doesn't pass the Iowa common sense test," Kaufmann said. "That's not an acceptable answer in Rochester, Iowa, where people are living in $20,000 trailers." The average income in Rochester, a Cedar County town of 600, flooded last summer, is "way below" the lowest salary of RIO employees, he said. – “Called on the Carpet,” The Cedar Rapids Gazette, 2/5/09

Now Republican Party of Iowa Chair, Jeff Kaufmann says Patty Judge has never atoned for letting down flood victims, and this latest ad is an insult to those she was supposed to help.

“Patty Judge is running an ad about an office she mismanaged, along with everything else she and Chet Culver messed up while in office,” said Kaufmann. “These victims are my friends. My neighbors. At one time, they were her constituents until she was kicked out of office for their reckless waste of taxpayer dollars. We don’t need her so-called ‘leadership’ in Washington.”

Iowa Republicans have used the $19,000 carpet expenditure to score political points before.

The talking point helps them deflect attention from the fact that many eastern Iowa flood recovery projects would not have been possible if Kaufmann and his fellow Republicans had gotten their way. Every GOP lawmaker in the Iowa House and Senate voted against the infrastructure bonding initiative that directed tens of millions of dollars to rebuilding infrastructure destroyed in the 2008 floods. At the time, Republicans claimed Iowa should "support funding infrastructure projects on a pay-as-you-go basis."

But the Great Recession caused "the largest collapse in state revenues on record"-- across the country, not just in Iowa. Our state's leaders didn't have $45 million lying around to spend on flood recovery projects in Linn County, or money to rebuild fire stations in three other communities affected by flooding in 2008.

The Iowa GOP did not respond to my May 24 request for Kaufmann to comment on how he would have paid for flood recovery work.

UPDATE: Todd Dorman discussed the Judge ad and the Republican response in his latest column for the Cedar Rapids Gazette:

You can appreciate the complexities, complications and pitfalls of a massive response to the state’s worst ever disaster, in the middle of a global recession. Or you can take cheap political potshots.

State Republicans swiftly hit Judge with an old saw about how the Rebuild Iowa Office, established by Culver and Judge, spent $19,000 on new carpeting for its office. Heroic GOP lawmakers demanded to know why this carpet money wasn’t going to flooded communities. Shifting answers made Culver’s folks look pretty bad.

It played well in 2009, admittedly. But after RIO then helped administer more than $4 billion in disaster assistance, rehashing the carpet bill only proves Republicans think we’re stupid. It could become the heated sidewalks of the 2016 campaign. [...]

Jimmy Centers, a former spokesman for Gov. Terry Branstad who now leads Priorities for Iowa, took to Twitter to trot out a 2010 federal audit claiming $10.5 million in flood assistance had been “misspent” during the Culver years.

The Department of Housing and Urban Development did accuse officials of misspending assistance handed out to hundreds of flooded businesses. The dispute boiled down to a disagreement over rules and procedures. [...]

According to Cedar Rapids Community Development Director Jennifer Pratt, businesses were forced to redo a bunch of paperwork. It was a big hassle. But in the end, she said, not one dime had to be paid back to the federal government.

Dorman's comment about "heated sidewalks" refers to one of the big Republican lies during the 2010 campaign. Those alleged heated sidewalks never existed.