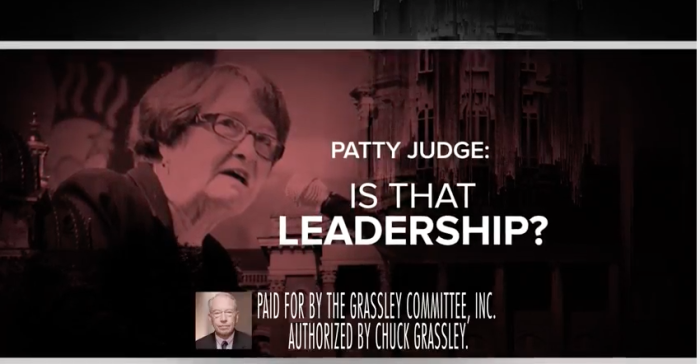 Grassley did not run any negative commercials during his 2010 re-election bid. In fact, I am fairly certain you'd have to go back to the 1980s to find any attack ads paid for by Grassley's campaign. UPDATE/CORRECTION: I've been told Grassley ran one negative spot against Democratic challenger David Osterberg in 1998, saying (among other things) that the former Iowa lawmaker had been educated in socialist Sweden. SECOND UPDATE: Osterberg confirmed Grassley ran negative advertising in his race, but he recalls that the commercial was on radio rather than television. Scroll to the end of this post for details.

Incumbents who are not worried about the election typically stick to positive messages in their paid media. The last four public polls of Iowa's U.S. Senate race have found Grassley ahead of Judge by 45 percent to 38 percent (CBS/YouGov), 51 percent to 42 percent (Quinnipiac), and 52 percent to 42 percent (Suffolk and Marist). Those are smaller leads than the senator has had over previous Democratic challengers.

The commercial hits former Lt. Gov. Patty Judge for not voluntarily taking a pay cut when the Great Recession led to a state budget deficit. Grassley, of course, has accepted many pay increases when the federal deficit was much larger...

Grassley's voice: I'm Chuck Grassley, and I approve this message. [viewer sees footage of Grassley walking and talking with an unidentified woman]

Spending was slashed 10 percent. [faces of of then Lieutenant Governor Judge and Governor Chet Culver appear on either side of the capitol; words 10% CUT ACROSS THE BOARD The Des Moines Register, 10/8/09]

The governor, auditor, and secretary of agriculture voluntarily cut their pay 10 percent. [faces of Culver, State Auditor David Vaudt, and Secretary of Agriculture Bill Northey are on screen, labeled "Culver," "Vaudt," "Northey," with "cut 10%" appearing next to their names; below photos, words MANY STEPPED UP TO HELP, The Des Moines Register, 7/8/10]

Is that leadership? [photo of Judge now next to words PATTY JUDGE: IS THAT LEADERSHIP? Near bottom of screen, small photo of Grassley and paid-for message appears]

The "Great Recession" caused state revenues to plummet well below projections, not only in Iowa but across the country. Instead of raising taxes or drawing more from the state's cash reserves, Culver imposed a 10 percent across-the-board budget cut in October 2009, leading to salary cuts or furloughs for many state employees.

Within hours of Grassley unveiling this commercial, Judge's campaign responded with a press release that did not dispute the central claim in Grassley's ad, but provided several examples of the senator accepting his salary as well as pay hikes while the federal budget was in bad shape.

Grassley goes negative, hides record of pay increases and skyrocketing personal wealth
Grassley took pay raise during the height of the recession and even accepted his paycheck during the government shutdown

DES MOINES, Iowa – As Chuck Grassley launches an attack ad on Patty Judge today and the most recent poll has him dangerously below 50 percent, he’s not being honest with Iowans about his record of using the U.S. Senate to dramatically increase his personal wealth. The facts are that Grassley insisted on being paid during the government shutdown he supported, took a $4,700 pay increase in 2009 during the Great Recession, and accepted 23 pay increases during his tenure in D.C.

“Just days after polls showed Chuck Grassley scraping together only 45 percent of the vote, he has already turned to negative attack ads in an attempt to hide the fact that he has turned his back on Iowa,” said Patty Judge for Iowa Spokesperson Sam Roecker. “Chuck Grassley isn’t telling Iowans that while over 120 members of Congress refused or donated their pay during the government shutdown he supported, he insisted on receiving his paycheck. He also isn’t telling Iowans that he took his 23rd pay increase during the worst recession this country has had since World War II, or that he has accepted every possible pay increase since he first went to Washington. To this day, taxpayers pick up the bill for Grassley’s reckless partisanship and unprecedented obstruction. Iowa families know that if you don’t do the job, you don’t get paid. Sadly, Chuck Grassley seems to have forgotten that.”

CHUCK’S NOT TELLING YOU THAT IN 2009 WHEN THE ECONOMY WAS IN RECESSION AND THE FEDERAL DEFICIT WAS INCREASING…HE TOOK A PAY RAISE.

CHUCK’S NOT TELLING YOU THAT IN 2009 WHEN HE TOOK A PAY RAISE, THE FEDERAL BUDGET DEFICIT WAS EXPLODING AND THE NATION WAS SUFFERING FROM HISTORIC JOB LOSSES.

The Great Recession Resulted in 8.8 Million Jobs Lost Nationwide. In April 2011, an article in the Monthly Labor Review stated that “At its lowest point, February 2010, U.S. employment had declined by 8.8 million from its prerecession peak. (See chart 1.) The breadth and depth of the recession, particularly in comparison with recent recessions, has led some to label it ‘The Great Recession.’” [Monthly Labor Review, 4/11]

Grassley Signs onto Letter That Threatens to Stop Continuing Resolutions that Fund Affordable Care Act. In August 2013, the Waterloo-Cedar Falls Courier reported that "With no compromises worked out on a budget bill, funding government programs could come through continuing resolutions to keep paying the bills. Several Republican senators have threatened to stop any continuing resolutions that fund the Affordable Care Act, commonly known as Obamacare. Led by Sen. Mike Lee, R-Utah, as well as Sen. Ted Cruz, R-Texas, and Sen. Rand Paul, R-Ky., a coalition has informed Senate Majority Leader Harry Reid, D-Nev., that they will not vote for any continuing resolution that funds implementation of the act. Grassley was among 12 Republican senators who signed Lee's letter to Reid stating their position." [Waterloo-Cedar Falls Courier, 8/1/13]

Grassley Threatened to Refuse to Support Funding the Government If Funds Are Used to Implement the Affordable Care Act. In August 2013, the Des Moines Register Editorial Board wrote that "He is increasingly becoming part of the extremist wing of the Republican Party that plays a key role in the paralysis of the federal government. Most recently, Grassley chose to add his signature to a letter to Senate Majority Leader Harry Reid threatening to refuse support for a continuing resolution for government-wide funding if such funding includes any money to implement the health reform law. In other words, the senior member of Iowa's congressional delegation is willing to shut down the federal government after Sept. 30 because he doesn't want to fund the health reform law." [Des Moines Register, 8/2/13]

Grassley Says He's a Representative of the People, Will Continue Getting Paid. In October 2013, WQAD/ABC-8 reported that "But others, like Senator Chuck Grassley (R-Iowa) says they won't return their paycheck. 'We're in government to make government work and try to find a solution,' Senator Grassley told News 8 during his weekly conference call on Wednesday. 'I'm working. Everybody that works gets paid for working [...] 'We have minimum staff in to keep our office open,' Grassley said. 'We aren't like some Democratic Senators that have a sign on the door, ‘Closed for Business.' I'm a Representative of the people of Iowa and representing is about dialogue between those of us elected. We're going to keep our office open. I'm going to continue to work. I'm going to continue to be paid.'" [WQAD/ABC-8, 10/2/13]

Grassley Explains Why He Won't Stop Getting Paid During Shutdown. In October 2013, the Quad-City Times reported that "On his weekly conference call with Iowa reporters, Sen. Chuck Grassley, R-Iowa, was asked Wednesday about the subject of pay, too. 'The answer is I'm working. Anybody else in my office is being paid if they're working,' he said. He cited the 19th century Anti-Deficiency Act, which has been interpreted by some to say that federal employees can't volunteer their time. 'I kind of fall into that same category,' Grassley said. When a reporter mentioned that other members are donating some of their pay, he replied: 'I'm way ahead of them. I tithe.'" [Quad-City Times, 10/4/13]

Grassley Defends Taking Salary During Shutdown, While Over 120 Members Refused or Donated Their Pay. In October 2013, Newton Daily News reported that "Currently, more than 120 members of Congress from both houses and both political parties have announced they are either refusing to accept their pay, or are donating it to various charities. No Iowa member of Congress has made such an announcement. Grassley said he was 'already ahead of the curve,' because he donates regularly to charities and has engaged in tithing, the Christian practice of giving one-tenth of one's income to the church, for '35 to 40 years.'" [Newton Daily News, 10/4/13]

In Contrast to Grassley, Iowa’s Dave Loebsack And 120 Others Declined to Take Pay During the Shutdown. In October 2013, the Quad-City Times reported that "Reps. Cheri Bustos, D-Ill., and Dave Loebsack, D-Iowa, have asked that their pay be withheld while the federal government is on partial shutdown. Both members sent letters this week to the House Chief Administrative Officer making that request. […] With hundreds of thousands of federal workers off the job, Congress has been feeling the pressure from constituents, and dozens of members are letting it be known they are willing to feel some economic consequence themselves. The Washington Post said that as of Thursday afternoon, there were 121 lawmakers on that list. Some have even gone so far as to say they will donate their pay to charity or write a check to the U.S. Treasury. […] Joe Hand, a Loebsack spokesman, said Thursday in an email that ‘the intent of the letter was for Dave to say to the House that he does not believe he should receive a paycheck for the time that the government is shutdown.’ It was not to simply delay the payment, he said. [Quad-City Times, 10/4/13]

CHUCK’S NOT TELLING YOU THAT HE HAS TAKEN 23 PAY INCREASES WHILE IN CONGRESS.

Since Entering Congress in 1975, Grassley Has Accepted 23 Pay Increases (3 in the House, 20 In the Senate). [“Senate Salaries since 1789,” Senate.gov; “Salaries,” U.S. House of Representative Press Gallery]

During His Second Term in Congress in 1978, Senator Grassley Reported Between $123,000.06 and $330,000 in Assets. [Personal Finance Disclosure, United States House of Representatives Office of the Clerk, 1978]

Iowa Had the 5th Lowest Unemployment in 2010. [Bureau of Labor Statistics]

Iowa Had the 4th Lowest Unemployment in 2009. [Bureau of Labor Statistics]

In 2010, Grassley’s Campaign Bragged About Not Running Negative Ads. In October 2010, the Des Moines Register reported that “As more campaign ads begin airing Tuesday for Republican U.S. Sen. Chuck Grassley and Democrat Roxanne Conlin, Grassley's campaign said his ads have been positive, while Conlin's ads, until this latest one, have been ‘nothing but attack ads.’” [Des Moines Register, 10/13/10]

My Dad died in 1994 so I missed a bunch of legislative votes for the first time in my 12 years [in the Iowa House]. Grassley used that in some sort of ad--I think radio. Saying he always shows up for work but I did not think it was important. I even confronted him about it to ask him if he knew why he had absence data he could use at our debate at the Clay County Fair. His answer was something like "well you know politics." Actually, I'm not sure that was his reply or whether he took the ad down after.

He also claimed someplace (ad or interview) that I learned my economics in Socialist Sweden. I had studied there in my junior year in college and I took an economics class so I guess it would get a B on accuracy counters.