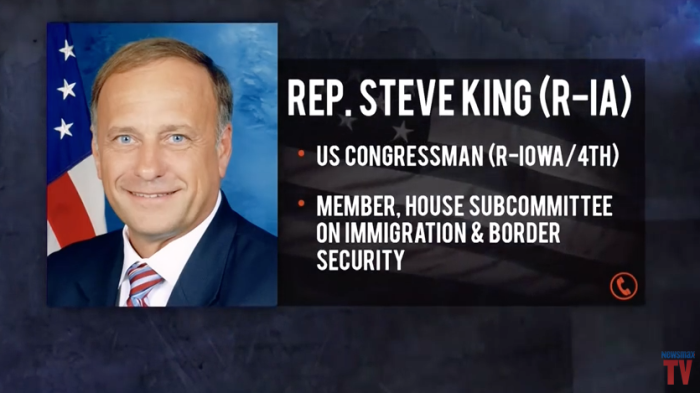 Steve King doesn't get it: Equating protest with terrorism is un-American

Blogger's dilemma: which of Representative Steve King's latest embarrassing, bigoted comments on national television should I focus on today?

Arguing that the government should guarantee parental leave only for the so-called "natural family" (which in King's mind does not include gay or lesbian parents) was reprehensible. Why does he keep looking so hard for ways the state can treat LGBT people like second-class citizens? A parent's sexual orientation should have no bearing on whether a baby deserves more time to bond with the primary caregiver. CNN's Chris Cuomo already did a good job challenging King, pointing out research shows babies in LGBT households "are doing just as well if not better" than children being raised by a man and a woman.

I'll take door number 2: King telling a friendly interviewer that professional football player Colin Kaepernick engaged in "activism that's sympathetic to ISIS" and should be forced to "take a knee and beg forgiveness from the American people."

Not being a football fan, I'd never heard of Kaepernick before the San Francisco 49ers reserve quarterback declined to stand during the national anthem at pre-season games. He explained in an interview with NFL Media,

"I am not going to stand up to show pride in a flag for a country that oppresses black people and people of color," [...] "To me, this is bigger than football and it would be selfish on my part to look the other way. There are bodies in the street and people getting paid leave and getting away with murder."

His coach Chip Kelly acknowledged, "That’s his right as a citizen," adding that "it's not my right to tell him not to do something." The 49ers said in a statement, "we recognize the right of an individual to choose and participate, or not, in our celebration of the national anthem." Teammate Torrey Smith said Kaepernick's action "made our team better in a lot of ways and honestly it hasn’t been a distraction at all.”

That wasn't good enough for a multitude of mostly-conservative commentators, who accused Kaepernick of disrespecting the flag, the U.S. military and/or all veterans who have served their country.

The topic came up during King's September 12 interview with Newsmax host Steve Malzberg. Here's the video clip and my transcript of the relevant portion, which came after Malzberg suggested Kaepernick had no right to free expression while wearing a 49ers uniform:

Well, Steve, I just think that if somebody's working for me, and they represent me, that's the same scenario, legal scenario, that they have on a football team. And you go out there, if somebody went out there and said, I'm going to, in my spare time, I'm going to promote abortion and same-sex marriage and eroding the Constitution of the United States and promote socialism, they'd be gone in the first minute they opened their mouth on that. I would fire them, and they all know that.

I think Colin Kaepernick is representing the San Francisco 49ers when he puts on that uniform. When he steps out on the stage, the world stage, he's taking advantage of that, and he's undermining, he's undermining patriotism.

I understand that he has an Islamic girlfriend that is his fiancee and that this has changed him and he's taken on some different political views along the way. This is activism that's sympathetic to ISIS. And for me, if I'm the coach, I would say, "You're done. Until you take a knee and beg forgiveness from the American people, you're not going to set foot out on this field again."

Several other NFL players have engaged in their own silent protests during the national anthem. Are they all blindly following their girlfriends?

Kaepernick's jersey became the top seller of all NFL jerseys in recent weeks. Are thousands of Americans trying to undermine patriotism or express sympathy with a terrorist organization?

King has repeatedly demonstrated his cluelessness on matters of racial justice. Just in the past three months, the seven-term incumbent representing an overwhelmingly white Congressional district:

• took a stand for keeping slave-owner Andrew Jackson on the $20 bill, saying it would be "divisive" to put abolitionist hero Harriet Tubman's picture on the currency;

• defended an office display including a miniature Confederate flag, under which people fought and died to preserve slavery;

• claimed the murder of police officers in Dallas "had roots" in protests King deemed "anti-white/cop events";

• argued it's "a clear fact" white people of European descent have contributed "more to civilization" than "other categories of people."

I've been following King's career too long to expect him to understand the Black Lives Matter movement or empathize with a celebrity using his platform to call attention to racial oppression.

But even for King, it's disgraceful to play mind-reader and invent false motives for Kaepernick.

Depicting a political protest you dislike as "sympathetic to ISIS" is not just unfair, it's un-American. People don't have to conform to what King considers acceptable behavior during the national anthem, nor should they be forced to beg anyone's forgiveness afterward. The First Amendment protects expression that may offend large numbers of people.

I made another donation this week to Kim Weaver, King's Democratic challenger in the fourth Congressional district. You can learn more about her here and here.