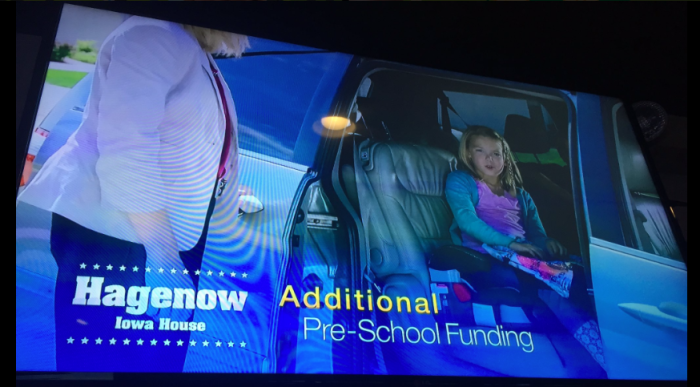 What's on your mind this weekend, Bleeding Heartland readers? This is an open thread: all topics welcome.

Many cities and towns in northeast Iowa have been flooded over the last few days, and Cedar Rapids is bracing for the city's second-worst flood in history. The latest forecast indicates the Cedar River will crest Tuesday morning around 23 feet, about two feet below the projected crest from a couple of days ago but still seven feet above "major flood" level. Many downtown streets are closed, National Guard members will assist local law enforcement, and a small army of volunteers have been sandbagging and trying to protect local landmarks. The Cedar Rapids Gazette is regularly updating this page with more 2016 flood coverage.

Several Iowa House Republican candidates began running television commercials this past week. Some GOP candidates for the Iowa Senate have been on the air for a couple of weeks now, and campaigns on both sides have begun to send out direct mail. Usually, those communications are not available online, so I appreciate reports on any direct mail pieces or state legislative campaign commercials you've seen or heard on radio and tv stations in your area. Whatever details you can remember are helpful, as are screen shots or pdf files showing images. My e-mail address is near the lower right-hand corner of this page.

In Iowa House district 43, one of the top targets for Democrats, House Majority Leader Chris Hagenow is running a tv ad whitewashing his record on education. Several other Republicans are trying out similar talking points, which presumably tested well in polls that were in the field a few weeks ago. I'll have more to say about Hagenow's ad in a future post. A few key points for now:

• Five legislative sessions in a row, House Republicans have refused to pass bills setting state support for K-12 education ("allowable growth") on the timeline required by state law. Their delays left school district leaders unable to plan their budgets on time.
• Six legislative sessions in a row, Iowa House and Senate Democrats have fought House Republicans over education funding. Every year, House GOP leaders insisted on a final budget below what school districts, community colleges, and state universities would need to keep up with rising costs.
• Hagenow absurdly postures as a supporter of more funding for preschool. In reality, within weeks after Republicans took over the Iowa House in 2011, Hagenow and everyone else in his caucus voted to eliminate state preschool funding. If Hagenow had gotten his way, Iowa would not even have a state-supported preschool program for 4-year-olds.

Speaking of revisionist history, Donald Trump's campaign is now claiming that Carter Page was never a foreign policy adviser to the presidential candidate. Both Trump and Page talked to journalists in March about his adviser role. Why the change? Probably because according to Michael Isikoff's September 23 story for Yahoo News, "U.S. intelligence officials are seeking to determine" whether Page "has opened up private communications with senior Russian officials." Questions center on Page's activities during a July visit to Moscow.

But how well-connected is Page in Russia anyway? Julia Ioffe talked to specialists in the U.S. and Moscow and reported in her must-read piece for Politico, "despite the tightly knit nature of the expat business community in Russia, no one I spoke to had ever heard of Carter Page." Several people who have worked in the Russian energy sector discounted Page's self-described role with the gas monopoly Gazprom. People who knew Page from Merrill Lynch's Moscow office or his work with Russia's electricity monopoly were unimpressed. Talk about irony: the ultimate con man Trump, who lies about matters large and small, may have been tricked into elevating Page's stature.

Ioffe's reporting suggests that Iowa's own Sam Clovis recruited Page on behalf of the Trump campaign. Clovis refused to answer the journalist's questions.

Final note: Craig Robinson and I discussed the Trump campaign's Russia connections with Dave Price for one of WHO-TV's September 21 newscasts; click here to watch that video. Robinson and I talked about other aspects of the presidential race on today's edition of "The Insiders." I'll add links when they become available.