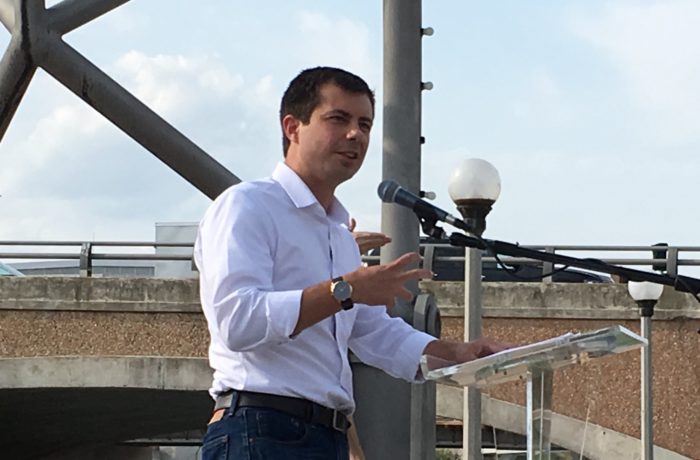 Pete Buttigieg on how Democrats can "flip the script"

"It is time for Democrats to stop treating the presidency like it’s the only office that matters," said South Bend, Indiana Mayor Pete Buttigieg, in one of the most memorable lines from his speech at the Progress Iowa Corn Feed in Des Moines on September 10. He missed a Notre Dame home football game weekend to spend time here, because in his view, we are facing "the most important season for progressives in our lifetime. And so much of what has to happen—so much of what has to change—starts right here in the middle of the country."

Last year's rout in state legislative races allowed Iowa Republicans to enact a long list of destructive policies. Although today's school board elections are non-partisan, as are the city council and mayoral races in November, the turnout level and outcomes should provide some clues about whether Democrats and progressives are able to translate their anger into effective political action.

Buttigieg recognizes the challenges facing a party at a low point nationally and in states like Indiana and Iowa. On the plus side, he is convinced Democrats already have a message that can resonate with voters, and "It’s not even complicated."

Buttigieg has served as South Bend mayor since 2011, except during his second tour in Afghanistan as a Navy reservist. He was easily re-elected in 2015, a few months after coming out as gay in the wake of Indiana's so-called "Religious Freedom Restoration Act," designed to allow businesses to discriminate against LGBT people.

Outside his home state, Buttigieg first appeared on many people's radar during his campaign for Democratic National Committee chair earlier this year. As the "wild card" in that race, he attracted support from four former DNC chairs and many others, promising a new focus on organizing and capacity-building at the state and local level. In his vision, a "50+ state strategy is necessary but it’s only the beginning"; Democrats need detailed plans tailored to the needs of different kinds of communities.

a political action committee that is dedicated to elevating the voices, concerns, and aspirations of Americans who no longer feel like they have a seat at the table in our political discourse.

Hitting Home will mobilize resources to elect Democrats, at every level and in communities both red and blue, who will put the lived experiences of Americans front and center. We will support candidates who focus on showing voters what we are for — not just what we are against — and understand how to do so in terms of our everyday lives. [...]

Hitting Home will work to show, rather than tell, how we can re-ground our politics in a renewed focus on the lives of our friends, neighbors, and loved ones. [...]

We will take as our foundation the belief that every policy and every candidacy should be justified mainly on the basis of what it represents for people who live with the effects of political decisions at every level.

Both our politics and our policies need a reset. By re-centering our work at the kitchen tables, workplaces, and schools where it matters most, we will reconnect with the moral center of our party. We will also, I am convinced, be practicing a more meaningful and effective political strategy.

Before the speaking program began at the Progress Iowa event, I asked Buttigieg for his thoughts after meeting State Central Committee members and some local activists. "It's really impressive, and what's really heartening to me is a lot of the themes that we talked about during the DNC race I see being put into action here," he said.

He has been emphasizing "the importance of state and local races. That if you're mad about [U.S. Secretary of Education] Betsy DeVos, the best thing you can do right now to have an impact is get on your school board" or help someone who's running. On September 9, he visited a home in the Des Moines suburbs where a "room full of people" were phone banking for two school board candidates. "You could just feel the level of energy, you could tell people were motivated to step up [...] That's what organizing ought to look like." (UPDATE: Candidates backed by the teachers union and Democratic activists did well across the state in the September 12 school board elections.)

Another component of Buttigieg's strategy: "Don't leave the red counties to the Republicans." Even if Democrats are not in a position to win those counties, "let's make it 60-40 and not 80-20, because that adds up" in a statewide election. He was encouraged after talking with Guthrie County chair Kathy Miller and Dallas County chair Bryce Smith about their efforts to build a progressive community. 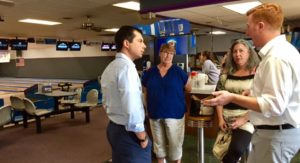 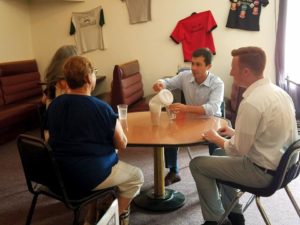 How would Buttigieg advise progressives to combat fatigue caused by losing so many political battles in a short time span? Toward the end of the Iowa legislature's 2017 session, lower attendance at weekend forums (which had been packed in January and February) was one sign that Democrats were feeling demoralized and discouraged.

I think the best way to flip the script is to organize around what we're for. And we need to be in ferocious opposition to bad things going on, but we do it in the name of what we're for, and we set the calendar on that. And when they mount an assault against it, we close ranks. [...]

If you can just make that subtle but really important switch, I think, to where we're out driving our agenda, and then we can respond to how their activities factor into it, instead of just always reacting and responding to their agenda. Because if you're always reacting, it is going to wear you down. [...] It's just when they, you know, have you worn out that they can do the most damage.

Buttigieg cited workers' rights to organize, a core Democratic value. "We don't know what flavor of assault they'll come up with." He thought Indiana Republicans "had done everything that could be done" on union-busting until he heard Iowa's new collective bargaining law counts people who don't vote in union recertification elections as a vote against union representation.

I share Buttigieg's view about not conceding red counties. When Democrats don't even field a candidate in many legislative districts, it looks like we don't care enough about voters in heavily Republican areas to give them an alternative. On the other hand, pouring time and energy into a hopeless race is a lot to ask of activists. What is Buttigieg's pitch to convince someone to run?

He'll "never regret" running for state treasurer in Indiana in 2010, Buttigieg told me. "It was as uphill as it gets. Never had a chance. I got clobbered." On the other hand, through that campaign "we could go to raise money for counties that hadn't seen a statewide candidate in a long time. You can just do some party-building there. And I think the conduct of our campaigns is almost as important as the outcomes. So we've got to represent."

During his speech to the Progress Iowa Corn Feed, Buttigieg further developed the idea of organizing around values and policies Democrats already support. The full text as prepared is at the end of this post, but I wanted to reproduce some important passages as delivered. Here's the audio, for those who want to listen:

I'm convinced that the solutions for the future are going to come communities like ours, from our cities, and our counties, and our towns right around us.

The problem is politically, it’s hard to talk about local solutions—or any solutions—because of this mesmerizing horror show that's going on in Washington right now.

And one thread at a time, our republic is unraveling to where, the American dream is going to be a mess of yarn in his hands, if we let him. And so it’s hard to think about anything else.

But I think for those of us who are motivated to support progressive values, it's not enough to make the case against Donald Trump. I think that case is already well known. I think even a lot of people who voted for him, on some level, already know that lying is wrong, racism is wrong. That denigrating women is wrong. They know all about Russia.

I believe our party is never going to recapture the faith and imagination of the American people if all we have to offer is a litany of this president’s many, many sins.

And I also believe it's not just about the White House. It is time for Democrats to stop treating the presidency like it’s the only office that matters. [...]

We've got to have a message that will hold true at every level, every year, everywhere, no matter who's in the White House. And I believe our message does. I want to make the case to you that there's no need for this hand-wringing that progressives and Democrats don’t have a message. Of course we do. Here’s our message: We support and protect people going about their everyday lives. That's it. That's what we're here for. [applause]

And by the way, the way we do it mostly has to do with defending people's freedom. Somewhere along the line, we let the other side corner the market on talking about freedom, and we've got to turn that around. Because this is Democratic bedrock from the days when FDR saved the free world. Freedom from want, freedom from fear.

And that’s very different from how Republicans think about freedom. For them, freedom from government is the only freedom they can imagine. And they're missing so much about what freedom really is.

I say you are not free if you can’t change jobs or start a new business because you’re afraid of losing health care coverage.

You’re not free if a credit card company can stick you with an arbitration clause that means you can’t sue them, even if they get caught ripping you off.

And you are definitely not free if some county clerk gets to tell you who you ought to marry. That's not freedom. [...]

So in the name of the places we know and the people we love, we’re going to have to stand up to everybody who does wrong. We’ll stand up to Congressmen who draw the maps so that they can pick their voters instead of the other way around. [applause]

We’re going to stand up, with the help of people like Senator [Jeff] Merkley, to senators who think a billionaire’s tax cut is worth more than a family’s health care. [applause]

We’re going to stand up to a president who cheapens the most respected office in our land with the heart of a miser and the mind of a cheater and the soul of a schoolyard bully, because standing up to bullies is what we do. [applause]

We're standing up for an America where equal work gets equal pay, where love is love and facts are facts, where hate has no home and everyone gets the same fair shot. We stand for the better America that we know we can be. That’s our message. It’s not even complicated. We stand proud for our values. Let's go show the world. Thank you. [end of speech]

Full text (as prepared) of Pete Buttigieg's speech in Des Moines on September 10: