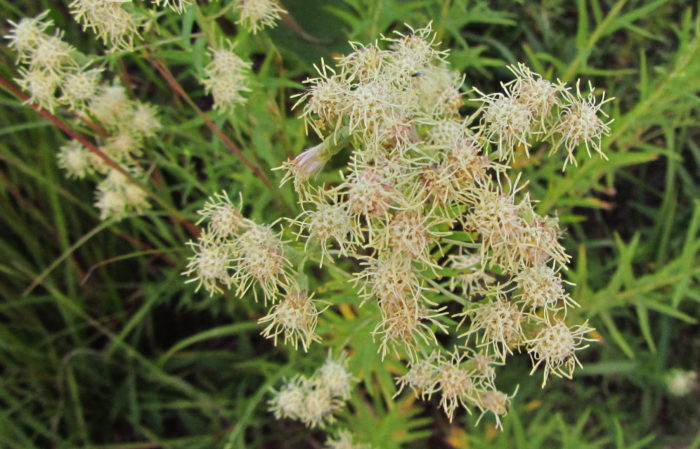 This week’s featured plant is far less showy than the brightly-colored Jerusalem artichoke or jewelweed, which bloom around the same time. However, it attracts a wide variety of pollinators and tolerates drought “better than most plants in the tallgrass prairie,” a plus after this unusually dry Iowa summer.

False boneset (Brickellia eupatorioides) is native to most of the U.S., except for New England and the states west of the Rockies. I took all of the enclosed pictures at a prairie Mike Delaney has been restoring on farmland he bought in Dallas County during the late 1980s.

The Illinois Wildflowers and Minnesota Wildflowers websites are good resources for botanically accurate information on the foliage, flowerheads, and seeds of this member of the aster family. You may find it in high-quality habitats, or in prairies and woodlands with relatively poor soil.

Flowerheads of several boneset plants strongly resemble each other. On false boneset, they are “stalked, rayless (no petals) but have 15 to 30 disk flowers each with 5 tiny lobes and a forked, creamy white to pale yellow, thread-like style protruding from the center.” The ivory color of false boneset is a giveaway, in contrast to the true white flowerheads of tall boneset and late boneset, which I have trouble distinguishing.

In early August, flowerheads on some false boneset plants were starting to open.

According to the Illinois Wildflowers site, “False Boneset doesn’t form large colonies, but is more likely to occur as sporadic plants. In moist areas with rich soil, it has trouble competing with taller, more aggressive forbs and grasses.” That’s true of the Delaney prairie, where I’ve found several clusters (rather than large colonies) of false boneset.

Closer views of the flowerheads, from early September:

You’d never guess that supporting this plant of modest height, only one to four feet,
there is “a very long taproot, growing to 16 feet deep.” Here is smallest false boneset I saw blooming this summer:

Some of the flowerheads had reddish coloring. I wondered if that was related to the dry summer. One knowledgeable plant-spotter thought it might be rust from July rains. Another speculated that certain minerals drawn from the soil can act as dyes.

False boneset plants gone to seed next to plants with flowerheads blooming:

Closer look at the seeds:

Some other kind of goldenrod around this false boneset:

Common milkweed plant with large seed pods in the background:

The plant with the silvery leaves is prairie sage: